100 Years of Star Worlds Celebrated at the 2022 Championship 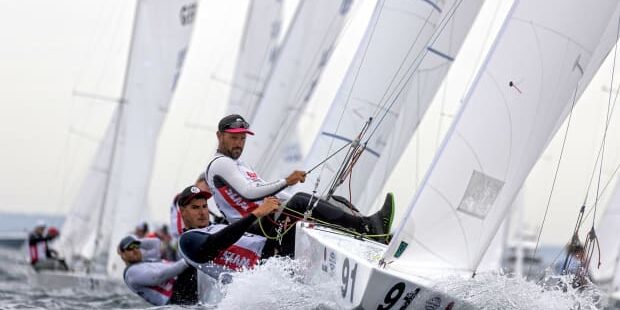 For the past century—through a world war, 18 Olympics, and a pandemic—Star Class world champions have earned the honor of carrying a gold star on their mainsail. In September, 90 Star boats from 13 countries gathered in Marblehead, Massachusetts, to celebrate 100 years of gold stars. The class is the oldest international one design that still hosts a world championship, and its longevity only makes it more compelling.

At that first regatta in 1922, three races on western Long Island Sound gave the victory to hull #1, Taurus. Blustery, cold September weather made the sweater-bundled sailors hesitant to shake out their reefs—a sharp contrast to the clothing choices and sailhandling concerns of 21st-century Star teams.

But right from that very first starting gun, stiff but respectful competition created lasting international friendships. Those bonds became especially poignant in 1939 when World War II interrupted the first Worlds held in Kiel, Germany. Even as sailors “stepped out of Star boats into battleships” (as the regatta report poetically noted), the championship was successfully concluded—and the annual tradition continued, right through the war years.

This year, the class allowed each Worlds team to choose a championship year as their sail number. So instead of reflecting the boat’s age, sailors could indicate their own vintage. (Jud Smith chose his birth year, 1957.) The choice was easy for gold star winners like Paul Cayard, who trimmed in 1988—though he was sailing this year with Frithjof “Frida” Kleen rather than Steve Erickson. Cayard’s son, Danny, (who sailed with another third-generation Star sailor, Jamie Buchan) chose 1969—the year his grandfather, Pelle Petterson, won with Ulf Schroder. Meanwhile, Joe Londrigan was looking up to see 1993, Eric Doyle showed off 1999, George Szabo sported 2009, and John MacCausland raised 2013 for each day’s race. Several more recent champions teamed up again with their gold star crews, including defending 2021 champions Diego Negri and Sergio Lambertenghi.

Winning a gold star has always required fast equipment, perfect preparation, flawless boathandling, and wise tactics—along with a little bit of luck. But perhaps the most crucial part of any such victory is the crew. Even though a weight limit has slimmed down those legendary “man-mountains” of the 1990s, Star crews still need to be powerful but nimble—not to mention experienced enough in the subtleties of these quirky hard-chined boats to keep skippers and masts in their proper place.

Brazilian Bruno Prada has won the Worlds five times with three different skippers. For 2022, Prada teamed up once again with Poland’s Mateusz Kusznierewicz, sailing under 2019—the year they won together. Prada loves the Worlds’ schedule of one long race each day over six days, because “every single race counts so much. If you make a mistake in two races, you are done.”

The first woman to race in a Star Worlds did so in 1926; she is identified in the results only as “Mrs. Curtis.” Several wives crewed and a few steered in those early decades, though only one, Mary Etchells, earned a gold star (crewing for husband Skip, in 1951). In 2022, there were two female helms as well as a few female crews.

Most gold star winners are over 40, and the oldest so far won at 62—a testament to the experience level needed for everything to fall into place, even just for that one week of each year. Though most of the previous winners were still on a long list of favorites in 2022, they were not eligible for the Under 30 Championship, which was hotly contested in Marblehead. These younger sailors may not have any idea how to shake out a reef or mend a wool sweater, but they can certainly appreciate the fierce competition and timeless, worldwide camaraderie that has always characterized the Star Class. And, alongside the veterans, they are already propelling this pinnacle of sailing excellence into its second century—despite whatever international distractions the world might come up with next.