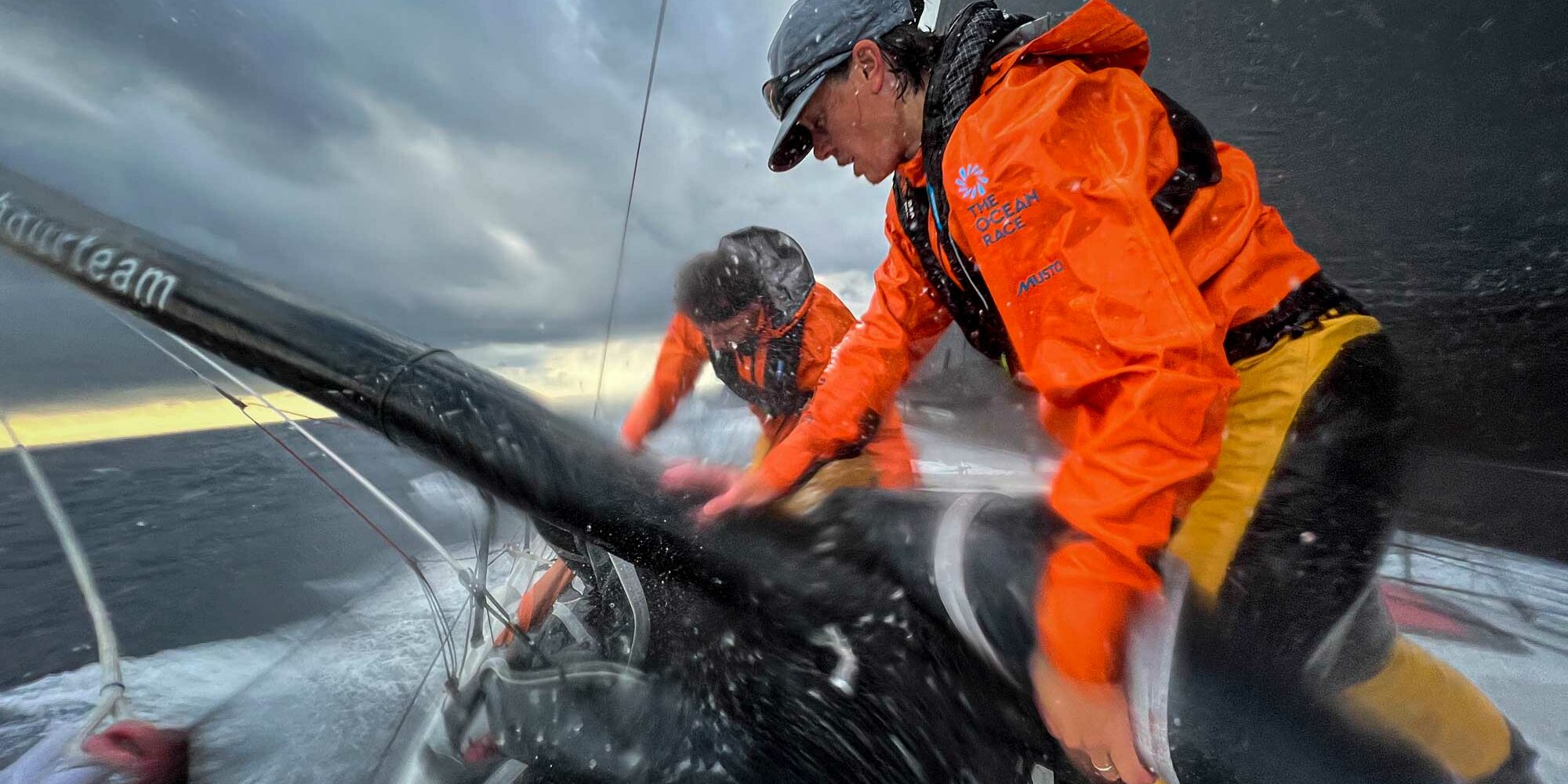 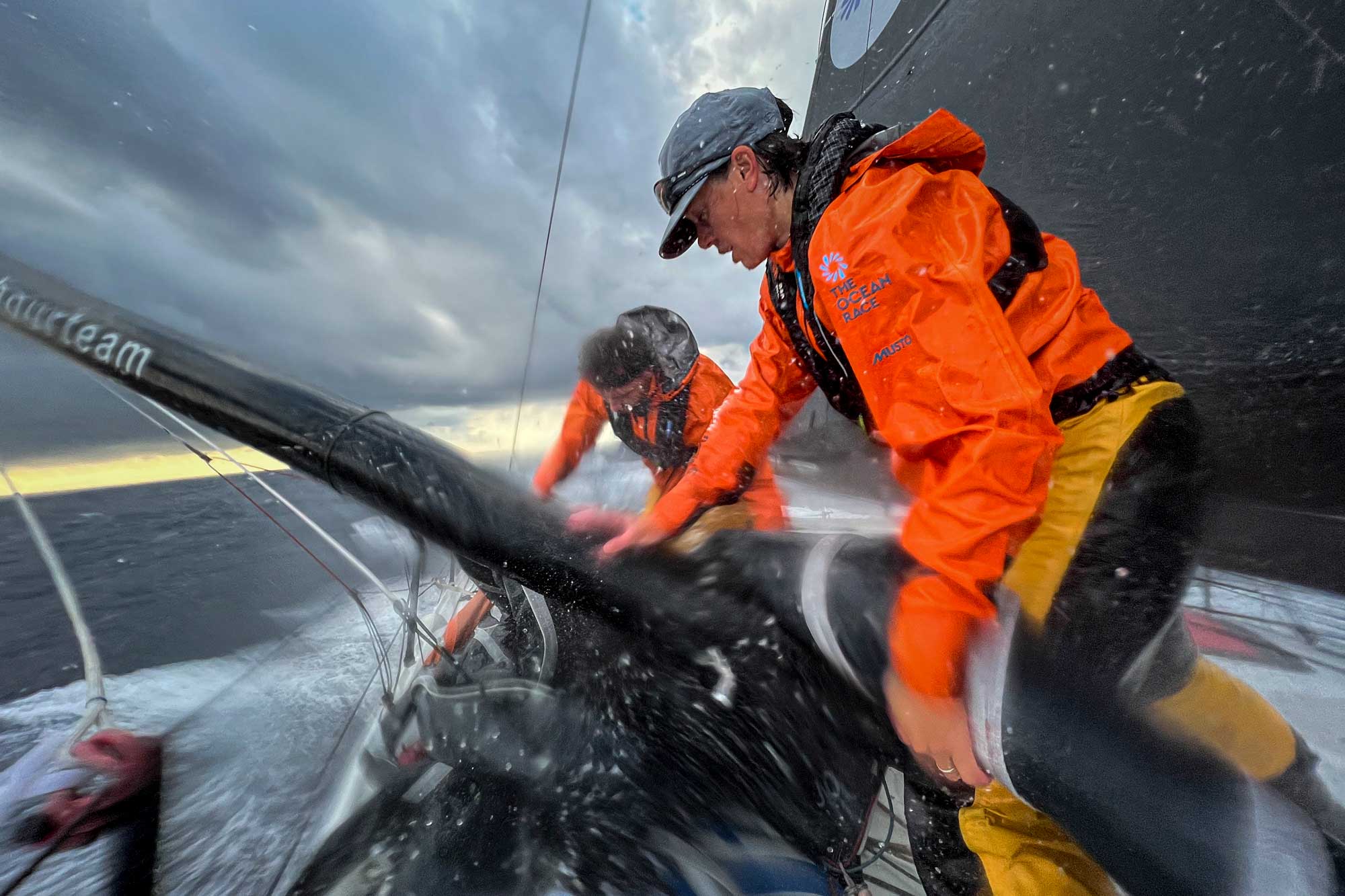 Francesca Clapcich and Jack Bouttell wrestle to stow a headsail after a sail change during the 48-hour Defi Azimut race in September. Amory Ross/11th Hour Racing

The final day of The Défi Azimut marked the last time The Ocean Race teams will line up against one another in a crewed format, before the start of The Ocean Race 2022-23 on January 15 next year.

Designed to pit both new and tried-and-tested IMOCAs against one another in full race mode, this year was the first time in The Défi Azimut’s 12-edition history the event saw four of the 29 IMOCA teams entered compete in a fully-crewed configuration with four sailors and one onboard reporter. The Ocean Race Teams competing were 11th Hour Racing Team, Biotherm, GUYOT environnement Team Europe, Team Malizia and Team Holcim-PRB*.

After claiming a podium with third place in the speed runs overall and first place amongst The Ocean Race Teams, 11th Hour Racing Team went on to win the crewed 48-hour offshore race, arriving into Lorient ahead of the newly launched GUYOT environnement – Team Europe, Team Malizia and Biotherm.

Skipper Charlie Enright said: “It’s been a great five days here in Lorient and a really enjoyable mix of racing, from the short speed runs to the offshore 48-hour race and the half-spin around Groix today. We’ve had a really clean regatta and we tried to make decisions as if we were racing in The Ocean Race.

“Obviously I’m pleased with the result, as it’s tough training by ourselves and we have no benchmark against other teams. Taking part in The Défi Azimut has given us this opportunity, which has been really insightful.

“I have to give so much credit to Biotherm, GUYOT environnement Team Europe, and Team Malizia who are all sailing new boats. Exactly one year ago we were just days out of the build shed and we barely made it to 12 hours in the offshore race before we broke our tiller arm. These teams sailed competitively for 500 miles just weeks after launch, so hats off to them,” he noted.

11th Hour Racing Team will sail Mālama back to their French base in Concarneau, further up the southern Brittany coast, and will head into three days of medical tests before a week of training with the offshore training academy, Pôle Finisterre. The other four teams entered so far in The Ocean Race are all building up to the start of the Route du Rhum, a solo race across the Atlantic from St Malo to Guadeloupe which sets off on November 6.

Enright concluded: “This was the first and last time we will line up competitively against the teams who will enter The Ocean Race next year. The countdown really has now begun to January 15, 2023 as we have a little less than four months of preparation before we set off around the world. There will be no further design changes to our boat, and our focus now is on the small incremental improvements we can make to boat speed, our boat handling, and onboard liveability. Our eyes are firmly on the startline of The Ocean Race and we look forward to welcoming the other teams back from their Route du Rhum races and seeing them in Alicante in the New Year.”

*Team Holcim-PRB has entered The Ocean Race, but skipper Kévin Escoffier (FRA) raced in The Défi Azimut singlehanded in preparation for this year’s Route du Rhum.