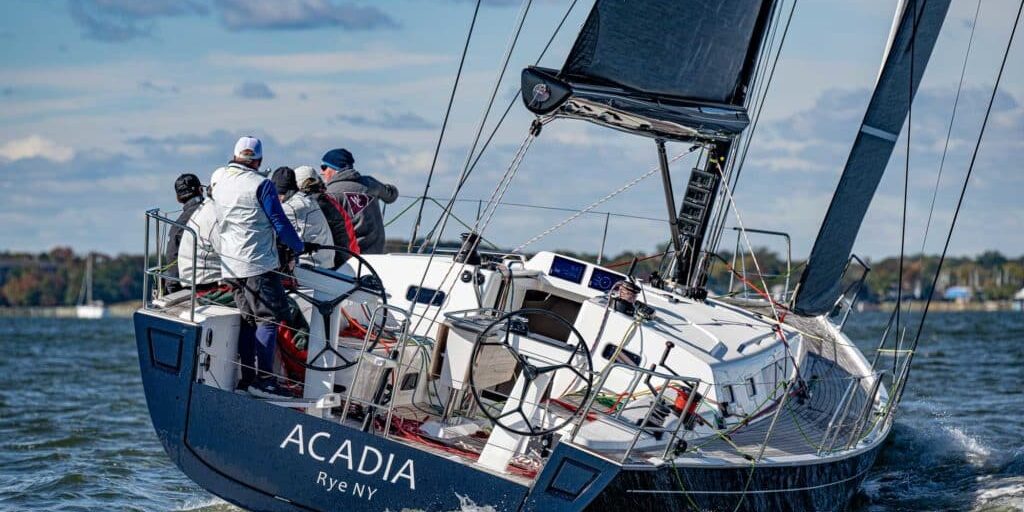 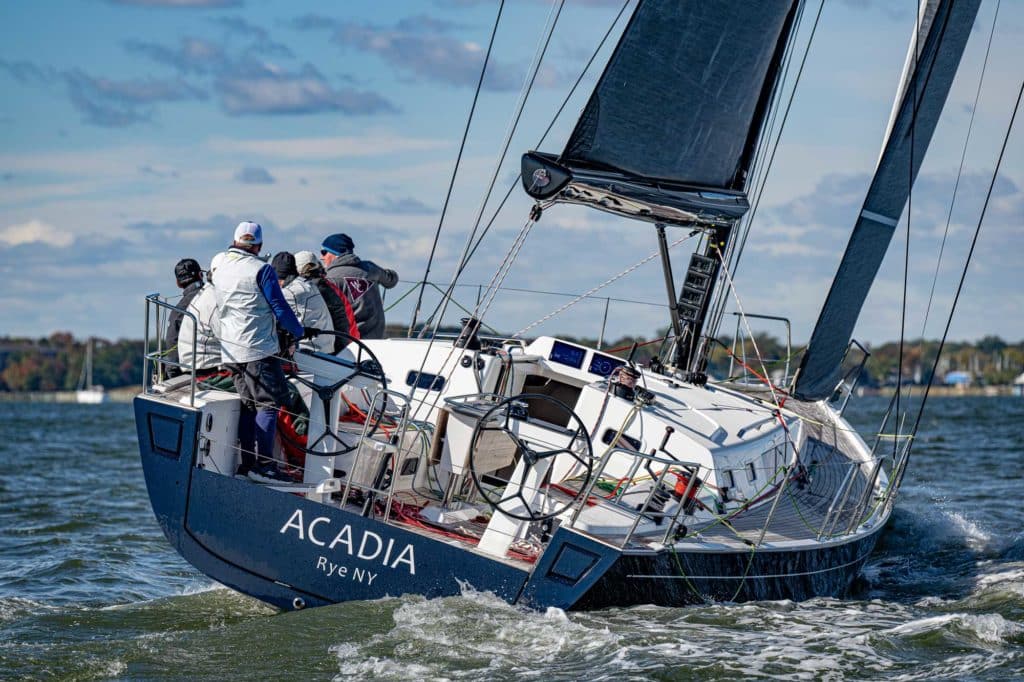 Powerful, is how the judges described the J/45’s sensation upwind, and great visibility from the helm across the backs of the hiking crew. Walter Cooper

The Johnstone family and their builders take their time to get it right. It’s what makes J Boats synonymous with proper and purposeful sailing boats, which now includes the J/45. For the many legacy J Boat owners, this sailboat is for you.

“It’s been a long time since we’ve come out with a boat this size,” says designer Alan Johnstone. “A lot of different trends have come along, and we’ve been paying attention and applying them in the sportboat range and in some of our smaller racer-cruisers.”

A good current-model comparison, says Jeff Johnstone, would be the company’s J/121e, which has been very successful on the offshore racing scene. “The J/45 has over a 40 percent ballast ratio, so that’s pretty substantial,” he says. “That means we can get away with a pretty sizable rig. Our markets are San Diego, Chicago and New England, where it doesn’t blow so hard, so we wanted to be able to actually sail in 5 knots of wind. With sails that work across the wind range, we have a more powerful hull that allows you to carry more sail area.”

The J/45 is a nod to J Boats’ raison d’être, Jeff explains. It’s a boat that is offshore-capable, and easy to campaign with friends and family in the club beer-can series and overnight races. “Look at the events that are prospering,” he says, “pursuit races and cruises—events you don’t need to have a pro crew on board.” 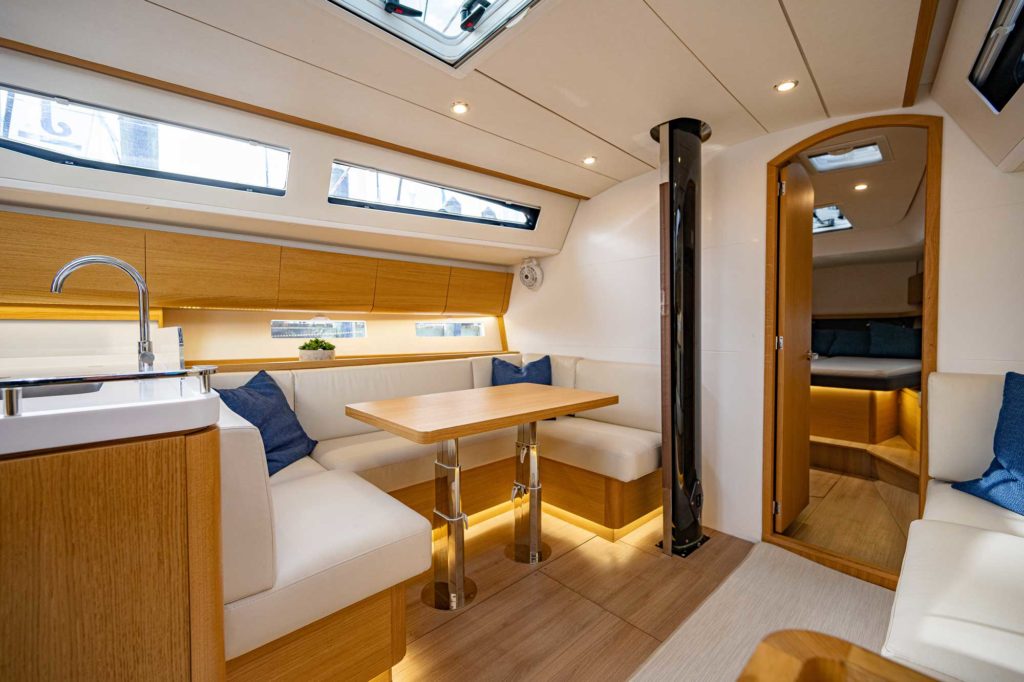 The interior of the J/45, built by J Composites (France), was lauded for its high quality finish and attention to detail as well as the efficient layout and brightness. Walter Cooper

The boat is intended for shorthanded sailing, so there’s a traditional and simple approach to the deck layout, with everything leading to the pit, through-jammers to Harken cabin-top winches (one electrified), one set of coaming primaries, and a pair of winches for the split mainsheet that runs below deck and exits from a nicely sculpted deck fitting. With twin pedestals, the carbon wheels are high and angled outboard for excellent visibility. 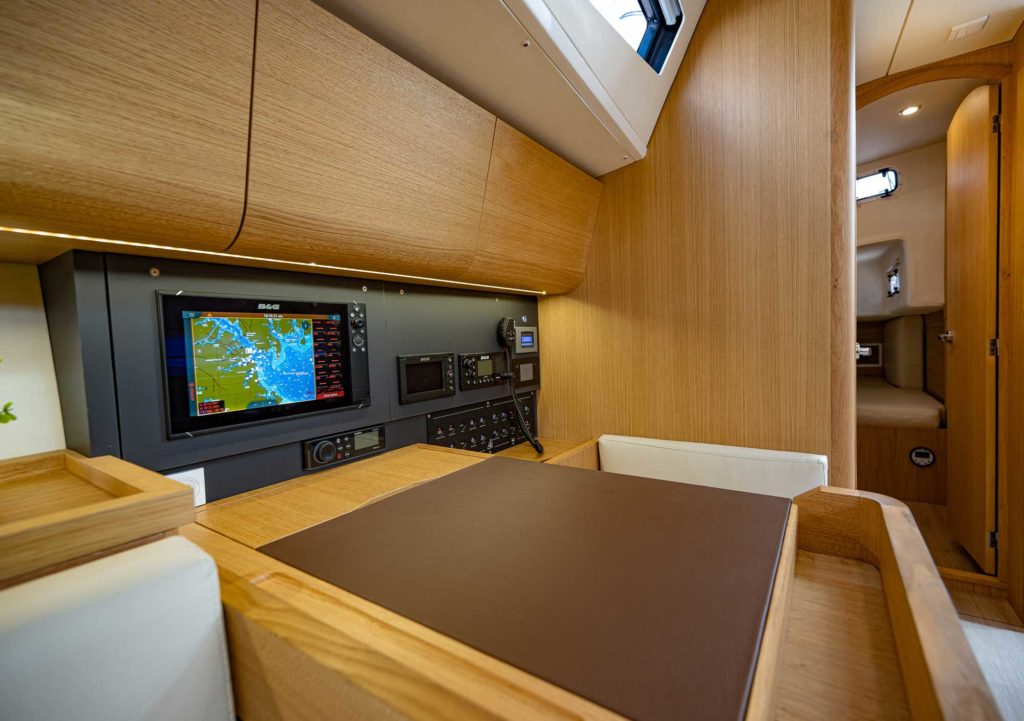 The nav station on the J/45 with a padded desktop and easy access to a suite of electronics and connections. Walter Cooper

“When I first saw it at the dock, I thought, This is a pretty cool race boat,” Powlison says. “When you step back and look at it, it has great-looking lines. When we got on, I immediately noted the sightline from the wheel. I could see across the entire boat all the way to the bow. It’s all really clean and has the attributes you’d expect to see on a proper race boat. When we went below, I was like, wow, it really is a boat I could live on for a while.”

The owner of the boat that was test-sailed has a young family of teens and uses the boat extensively for club racing and cruising in New England. So, the boat was laden with cruising extras, plus a retractable bow thruster, a hydraulic mast jack and an upgraded Hall carbon rig. A custom addition by the owner was the carbon furling boom, which was a project collaboration between North Sails and Hall. The owner is extremely happy with the furler, especially not having to make the family flake and stack 1,152 square feet of race-worthy sails on the family cruise. 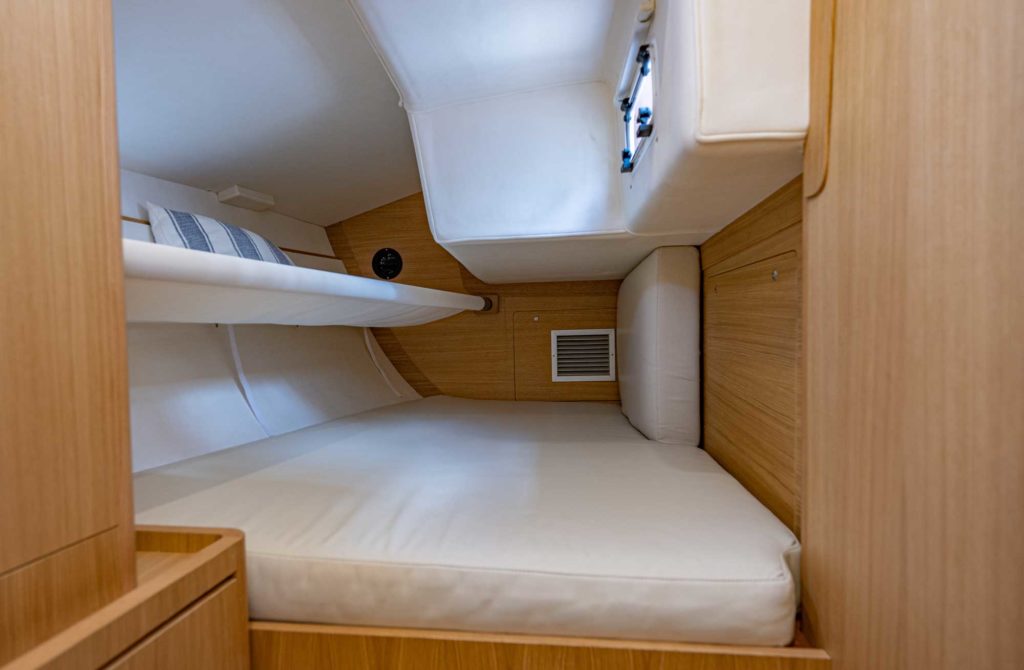 “It’s great to see the owner already racing it and doing what it’s meant for,” Allen says. “I know J Boats has wanted to do this model for a long time, and this is now its flagship. All the mechanicals are accessible, all nicely done and perfectly clean. This is a big deal for them, and it being just north of a million, I think this boat will appeal to a new level of client.” [Eds. note: After publication Jeff Johnstone clarified the judge’s quoted price “as sailed”: “Base price is $695k with carbon rig, and a sail-away budget with nice systems would be somewhere in the $900,000 to $1 million range.”

“I had full control through the jibes and tacks. My sense was that it just kept trucking through all the changes in the conditions.”

Stewart has a keen eye for a fast hull and says the J/45 gets its appeal from its subtle curved sheer line and the long, low cabin top. “It’s got a nice hull form too; it’s wide aft, but not unnecessarily wide. Still, there’s good volume for the length.”

Enough of the looks. How does it sail in 10 to 15 knots and moderate chop? 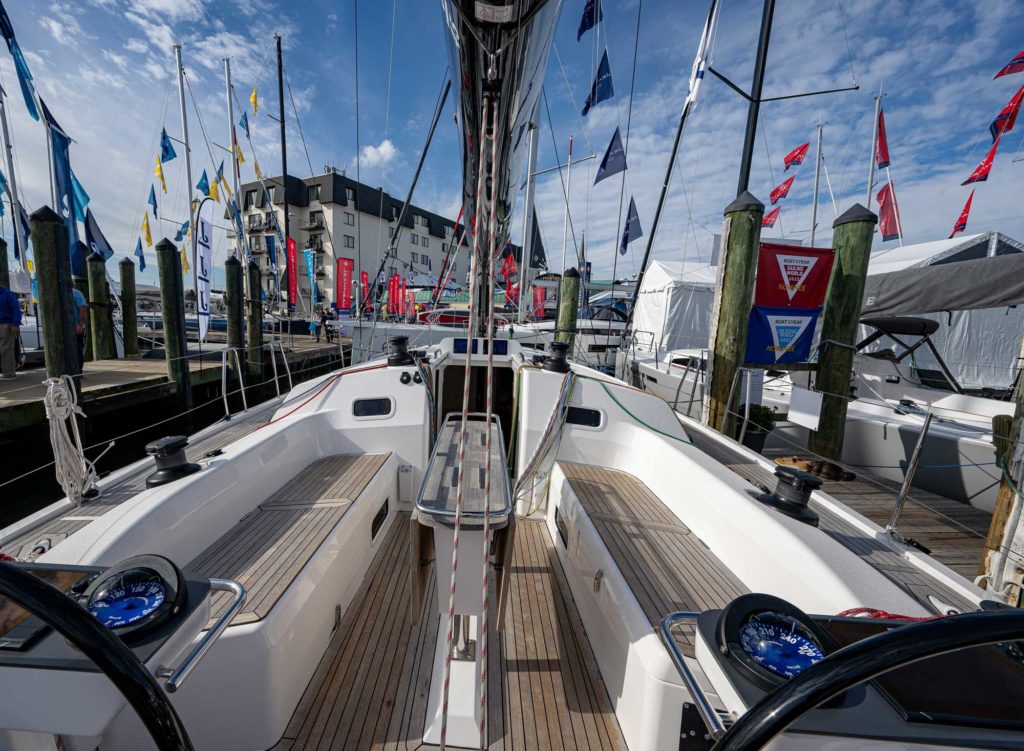 The cockpit of the J/45 is both roomy and set up well for club racing. The drop-leaf table is removable, but offshore would provide the necessary handholds to safely move about the cockpit. Walter Cooper

“It was definitely fingertip steering,” Powlison says. “It was really easy to turn—I had full control through the jibes and tacks, and my sense was that it just kept trucking through all the changes in the conditions. I could easily follow the breeze, and for a boat this big, I felt it was very responsive on the helm.”

Allen did his fair share of upwind driving with an experienced crew for the rail weight and sail trim. The midrange breeze for the test sail, Allen says, was the boat’s sweet spot. “When we lock into a puff, the boat leans over just a bit, the helm loads up a touch, and then the boat takes off. At times it did feel a little underpowered in the lulls, but in the 12 to 14, getting to 8.5 was easy and it would just stay there. And even with all the cruising stuff on the boat, downwind was awesome. With the A2, the boat can happily get to 155 to 147 with a little rocked-over weather heel. It was fun.” 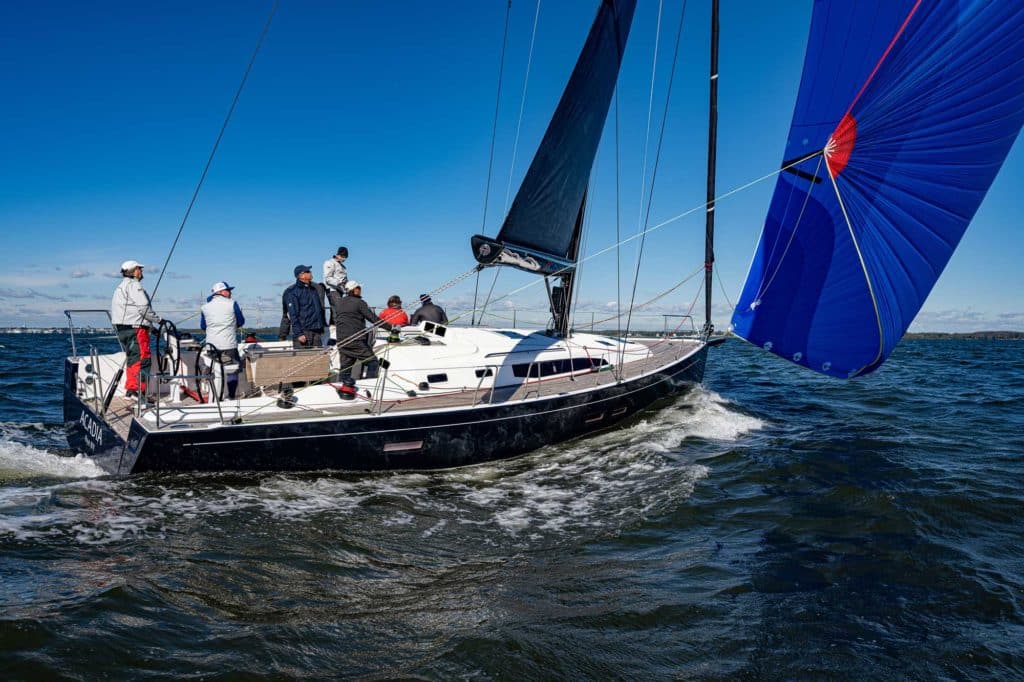 BOTY Judge Greg Stewart helms the J/45 during Boat of the Year tests in Annapolis in October. With a crew of eight capable sailors, the boat performed flawlessly through the wind range and through maneuvers. Walter Cooper

“It was good on the fingertip control as promised,” was Stewart’s assessment. “It’s light and responsive, and the wheels had zero play. The rudder had a lot of bite, and the boat was—as described by the designer—a stable and powerful boat.

“On top of that, it had great sails, was well-prepared, had good sailors on board, and showed perfectly to its potential.”