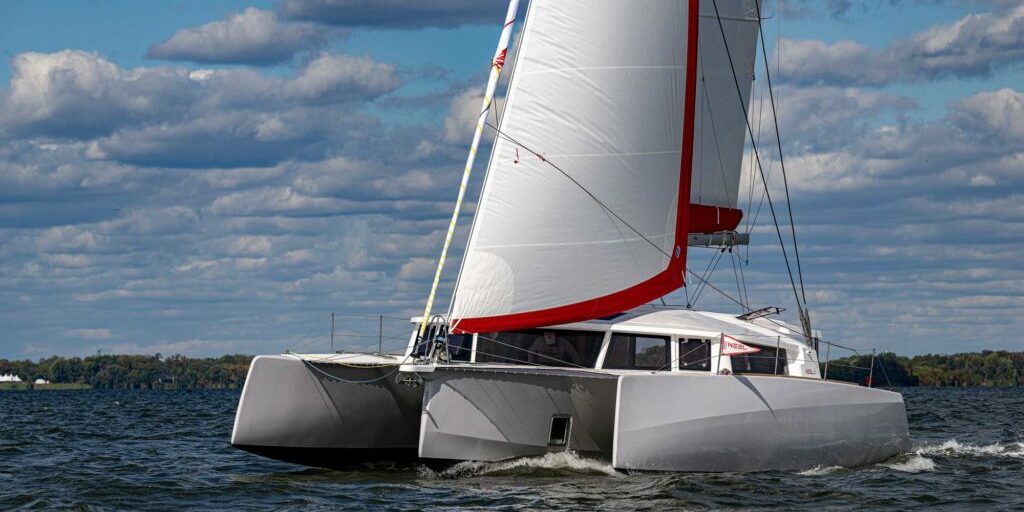 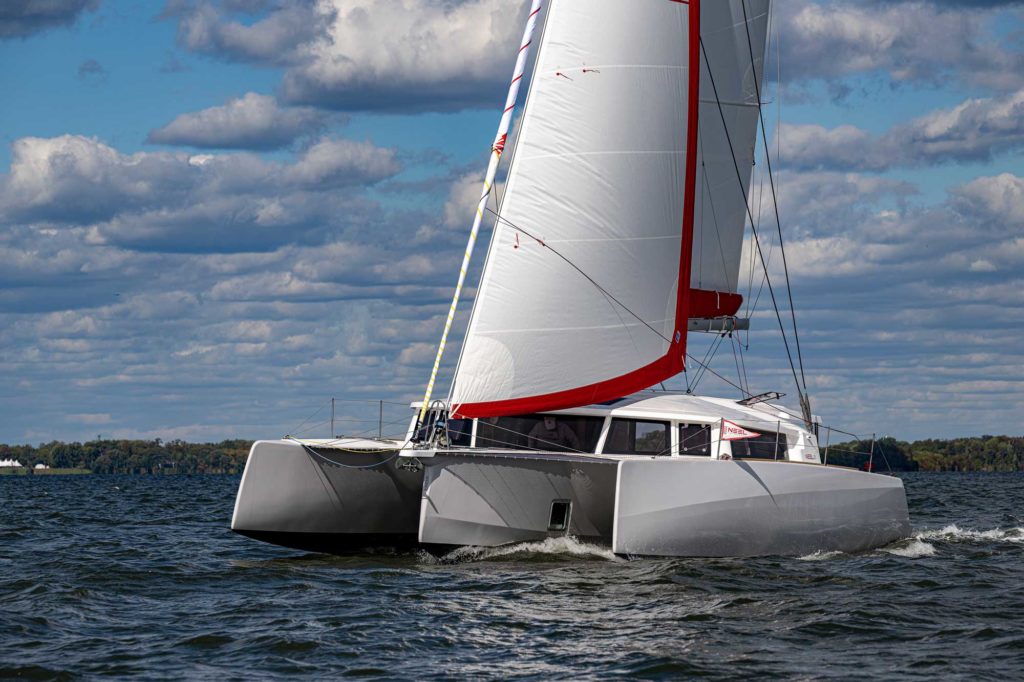 The Boat of the Year judging team praised the Marc Lombard-designed Neel 43 for its ease of handling; quick through tacks, the boat powered up quickly when sails were sheeted home. Walter Cooper

The Power of Three

In the sea of slab-sided catamarans that make up “multihull alley” in the US Sailboat Show, there’s a homogeneity that makes it almost impossible for one cat sailing condo to stand out among the others. (Gunboat and HH Catamarans being the high-ticket exceptions.)

Unique and mixed in among them, however, is the Neel 43 trimaran. From the dock perspective, it’s a big and imposing vessel. It’s also a proven bluewater performer that’s already won its share of hardware. While previous French-built Neel performance cruising tris have been overlooked by the racing set, that’s starting to change, as are opinions of multihulls. Ask the Texans in Galveston how many performance cruising multis are now doing their annual Harvest Moon Regatta—more than ever. And the Caribbean Multihull Challenge in St. Martin? It’s growing bigger by the year, and that’s because boats like the Neel 43 can be one heck of a ride and capable of being first to finish in a coastal overnighter.

“What surprised me is how much it sailed upwind like a monohull,” Allen says. “When you start flying the weather hull—when it’s just skimming the surface—the boat takes off. We didn’t have a ton of breeze for the test sail, but it was easy to see how you could really cover some ground with the right sail combination. I could see this boat being easily raced point-to-point by two people. With four crew on a coastal race, it would be a blast—go around the island and then park the thing and have a great night.” 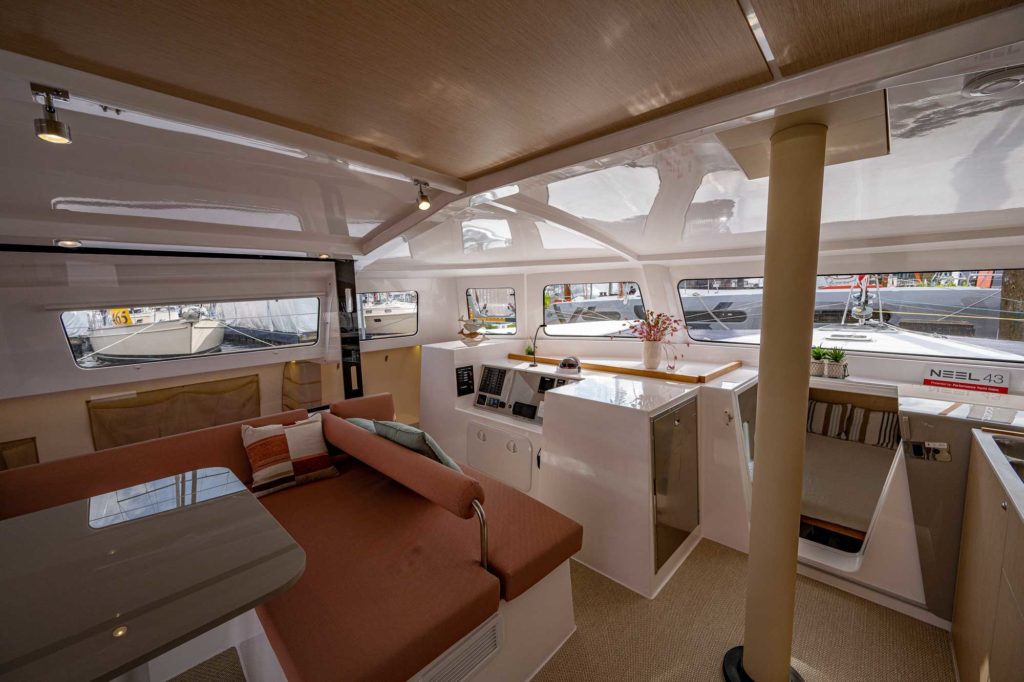 The entirety of the Neel 43’s accommodations are visible from the aft cockpit’s sliding doors and with windows all around visibility at sea and at anchor are nearly panoramic. Walter Cooper

The boat’s overall interior concept is to have one large and connected living space, visible from hull to hull. Step through the main salon sliding door and the living quarters are all right there before you with a near panoramic view. There’s an owners cabin in one hull, a guest cabin in the other, and a sunken V-berth forward. The layout is a striking change from similar-size catamarans, where cabins are down and low in the hulls. On the Neel 43, there’s a feeling of inclusion, like a loft apartment. It’s not necessarily better or worse in terms of owner privacy, the judges say. It’s just different. What the trimaran’s large center hull provides is a giant mechanical room below. Open a hatch and climb down a short ladder to an airy and brightly illuminated space with all the boat systems accessible. 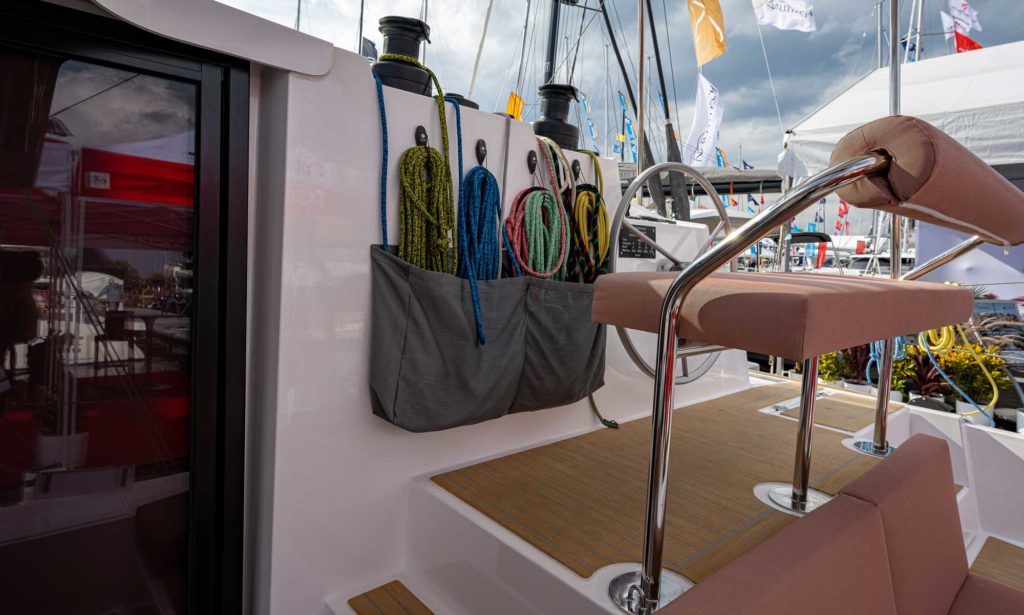 The helm station on the Neel 43 is only a few steps up from the aft cockpit. Walter Cooper

“With four on a long-­distance race, it would be a blast [to] go around the island and then park the thing on a mooring and have a great night.”

The boat is primarily intended for family cruising, Sastre says, but it’s ultimately for a sailor who appreciates performance. “When you trim in the sails, the boat lurches forward,” he says, thrusting his hips forward, “like whoosh! It takes off!

“A trimaran,” he adds, “is more stable than a catamaran and is faster than a catamaran, so sailing this boat is a lot of fun because helming it gives a feeling of great sensation. With the keel, mast and rudder on the center hull, trimming the amas is like a balancing act. It doesn’t heel too much, and it’s very stable. This is a platform for adventure.” 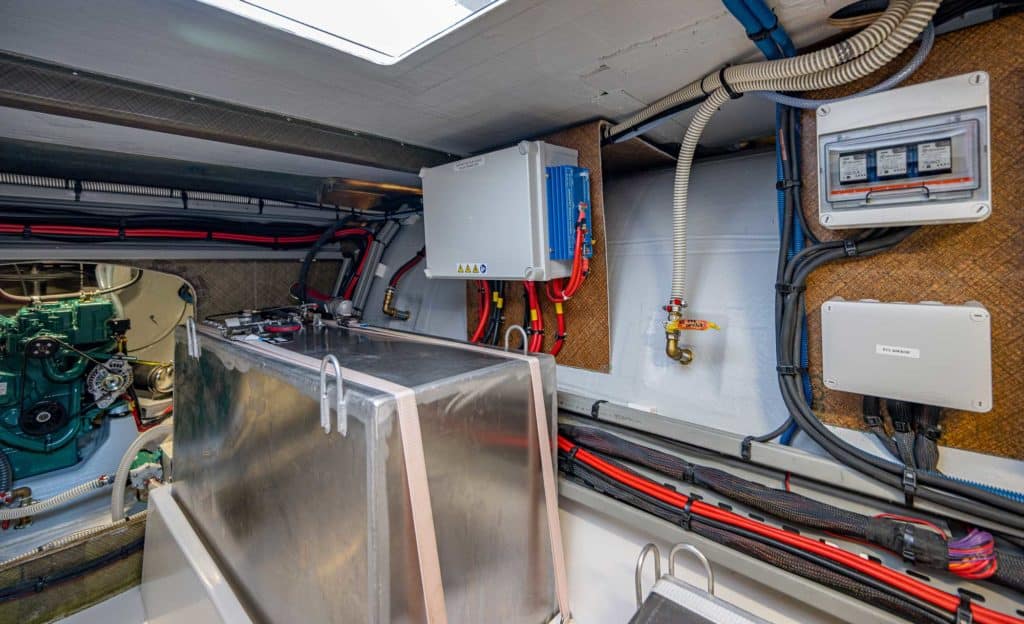 The mechanical room underneath the sole of the center hull provides easy and roomy access to all the boat’s systems. Walter Cooper

“It was the least multihull-like of all the multihulls we sailed,” Powlison says. “It handled like a monohull, and the third hull really makes a difference in being able turn the boat easily without stalling.”

The starboard cabin on the Neel 43 has a lot of room and quick access to the salon. Privacy curtains slide across the interior window. Walter Cooper

The boat is an impressive build of vinylester and foam core, with nearly the entire hull built off with one mold. Neel touts use of eco-friendly and recyclable materials, and even cork is used as coring in some interior elements. Solar panels on the roof power the fridge and electronics.

With a displacement of nearly 9 tons, there’s a lot of boat that spans 24 feet at maximum beam. Looking bow on, it’s a formidable-looking craft that glides quietly across the water when there’s all of 1,100 square feet of upwind sail area on the carbon rig. With its roller-furling gennaker deployed, the boat really lights up, as it should, Allen says.

The single helm is up high to starboard with good visibility, the judges note, with all the reef and control lines spilling into the helm area and into sheet bags. 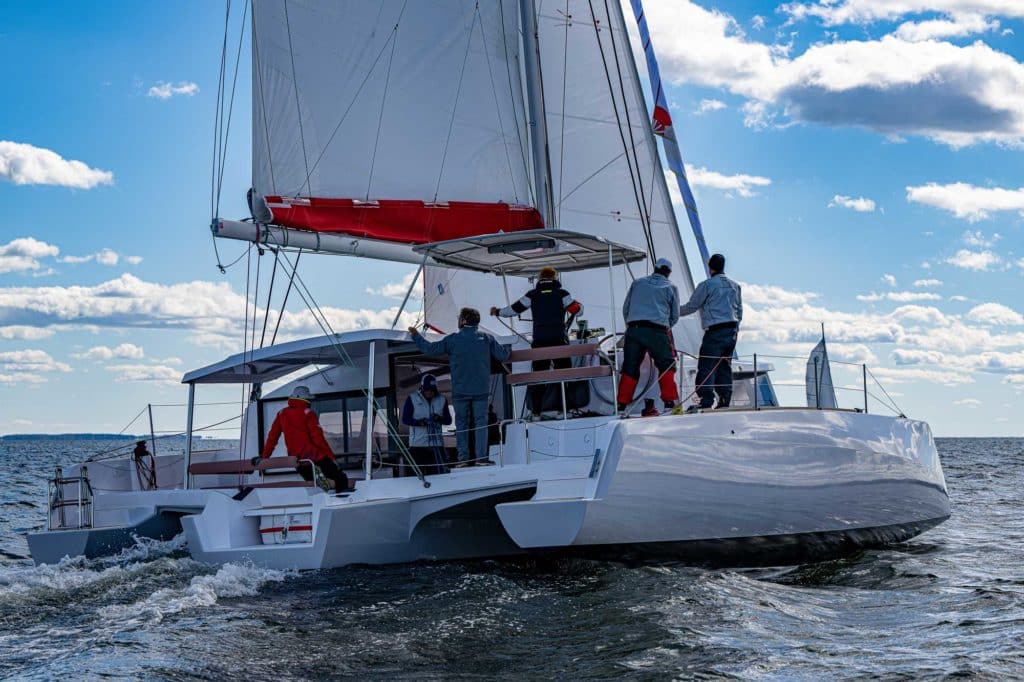 Boat of the Year judges test the Neel 43 in Annapolis with ideal conditions to test the power and handling of the lightweight performance cruising trimaran. Walter Cooper

The Dyneema cable steering, Stewart says, was very responsive: “This is Hull No. 25, which is a good indication they’ve hit it right with the type of owner drawn to this type of boat. It definitely meets its purpose and does what it is supposed to. It’s stable and powerful, and accelerated well, even with the small jib. It felt far more nimble than other big multihulls we’ve sailed in the past. The way that it tacked easily is a really appealing trait for the type of racing an owner can do, like in the Caribbean, where the races are around islands and there can be a fair bit of tacking.”

First around the island means the first ­relaxing, and that’s what the Neel 43 is designed to do.