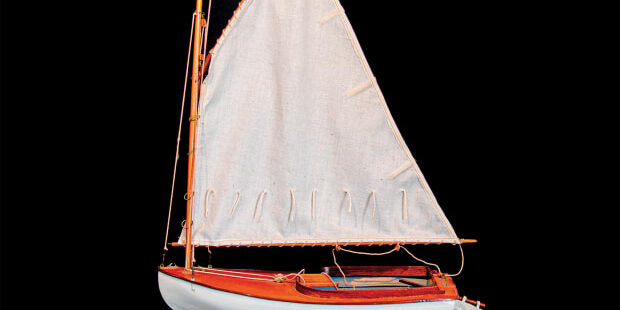 Growing up, sailing was always part of my life. This did not happen by chance but rather was the result of generations before me having made sailing and sailboat racing part of normal activities. I was never told I had to go sailing; it was just part of my family’s routine, an important part of my foundation.

My dad came from a family of eight kids growing up in Edgewood, Rhode Island. My grandfather was addicted to sailing like someone might be about golf. He would pack some supplies, gather all the children, and head for the Edgewood Yacht Club. It was there where his boat was moored, a large catboat that was ideal for holding lots of people. All my dad’s siblings, as well as friends of my grandparents, would go out sailing for the afternoon on Narragansett Bay.

In 1938 there was a severe hurricane that hit Rhode Island and destroyed dozens of boats. My dad was 15 years old at the time. After the hurricane, my dad and his brother walked the beaches and discovered the remains of eight small Beetle Cat catboats, which were and still are very common in the area. They decided to collect the remains of the eight boats and put them all together to create a single good one. They named the boat Pieces of Eight.

They raced Pieces of Eight and were quite successful. However, the especially interesting part of the story is what happened after they went to college, and their two younger sisters, Genevieve and Marjorie, raced the boat. It was rare at the time for girls to participate in sailboat racing. But my grandfather not only welcomed the fact they wanted to race, he encouraged it, and they went on to win the American Open Junior Championship in 1946,

Nine years later I was born. Like my grandfather, my dad wanted to carry on the family tradition of sailing and sailboat racing, and I was fortunate to spend most of my summers cruising out of Marblehead, Massachusetts, down to Cape Cod and the islands, where we would meet up with my grandfather and uncles on their boats. Those were wonderful experiences, during which I was taught to respect Mother Nature, in addition to navigation and boathandling skills.

As I got older, my dad thought it would be a good idea for me to learn to race. This made for a whole new sailing experience. Over the years, I had the pleasure of competing aboard a variety of sailboats—Blue Jays, Rhodes 19s, Shields, Day Sailers, 470’s, Etchells, Sonars, J/24, and C&C 41. For several years I even took part in the winter frostbite racing out on Boston Harbor with the Courageous Sailing center.

Having sailed and raced in Marblehead since the early 1960’s, I have had the luxury of being involved in a wonderful lifetime sport. So many of today’s kids participate in sports they will never play after high school. The skills they learn on the football or lacrosse field will never again play a role in their lives. Sailing, however, can be done at any age.

As my father got older, he moved to South Carolina to escape the icy winters up North. He still enjoyed his sailing, but never tired of reminiscing about his adventures back in New England. During one of his visits to Marblehead, I took him to the International Yacht Restoration School in Newport, Rhode Island, where students continue to work on and restore old Beetle Cats. My dad was thrilled to see a school that was still teaching the craft of wooden boatbuilding, an experience that was all the more special because of all the many Beetle Cats there.

When my dad got into his 80’s, I ran out of things to buy him for his birthday. Then came the day I found a company that built small wooden boat models to scale. I immediately placed an order for a Beetle Cat model, which I gave it to him for his next birthday. The photograph at the top of this story is the exact model I bought for him. Upon his death, the only item he passed on to me that really meant anything was that Beetle Cat model.