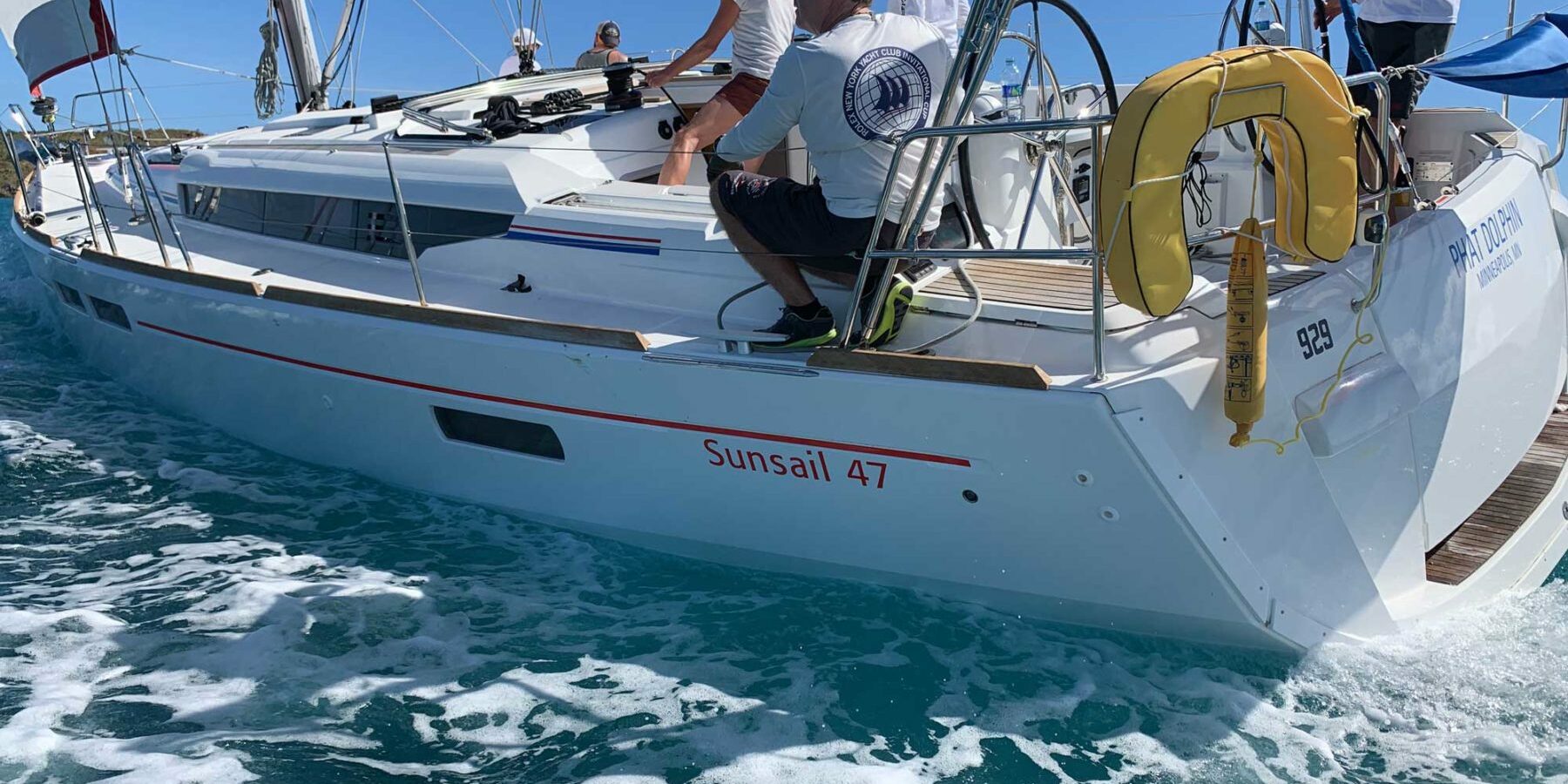 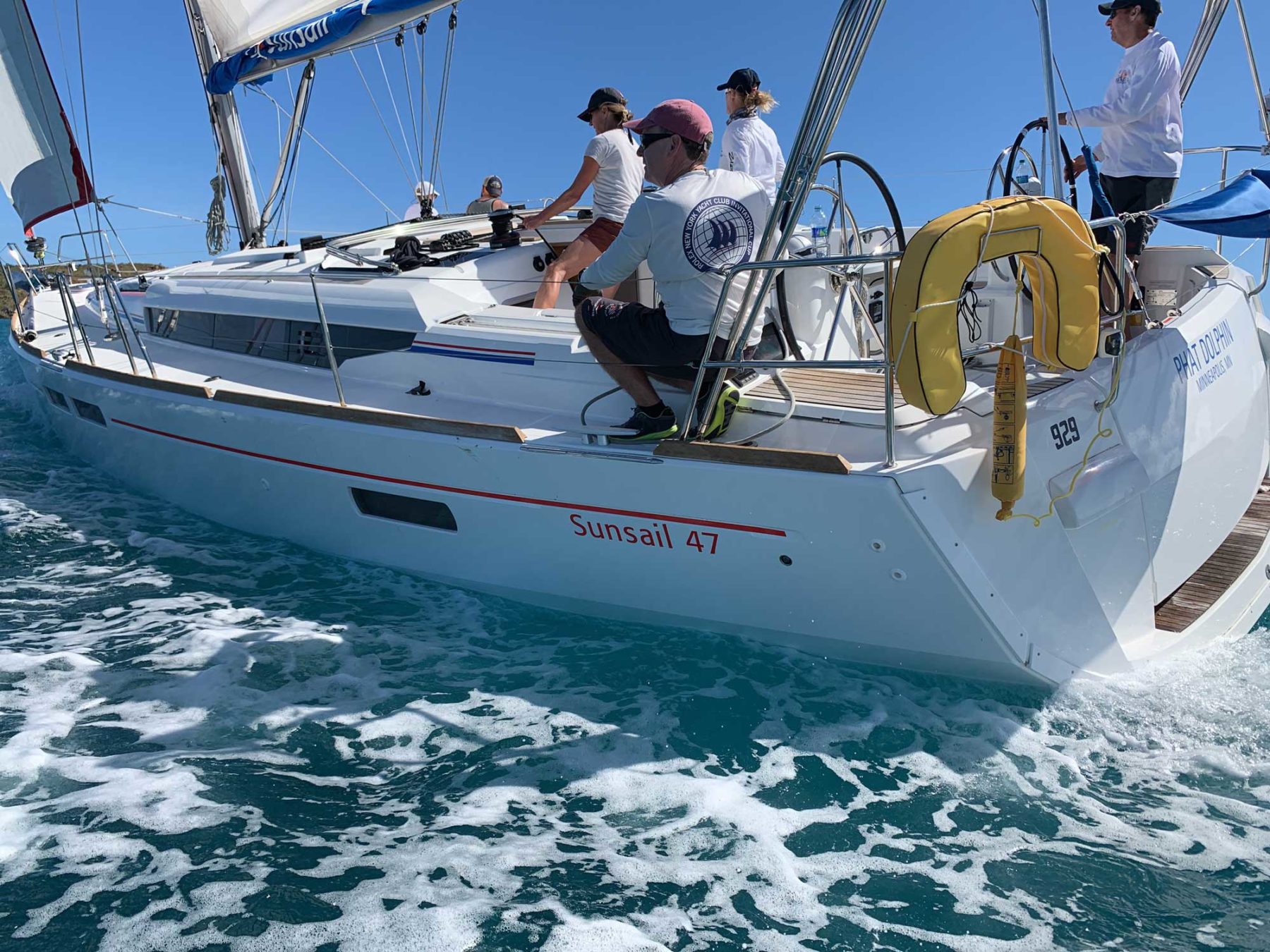 The waters of the British Virgin Islands showcase plenty of regattas, the BVI Spring and Interline Regatta being among the most widely recognized, but the one annual regatta few racers know about, is the one that could very well be the most difficult to win. That would, of course, be our own Helly Hansen Sailing World Regatta Series Caribbean Championship, which will once again be contested at the end of October following a three-year COVID hiatus. Nine teams from across the continental United States will line up for the season title in Sunsail charter boats packed with family and friends.

Six of the nine competitors earned their berths by nature of winning their respective class at a Helly Hansen Sailing World Regatta over the past three years. Two teams caught wind of the action and have been welcomed in to take on the Caribbean Challengers. One final team is that of a past defending champion who is keen to reclaim the throne lost years ago to the Marblehead-flagged team that called itself “Team Juhnksho.” You can read about it here.

That particular champion is skipper Jim Sears, of Long Beach, California. Way back when, Sears earned his berth as the top Viper 640 skipper at the San Diego stop of the regatta series. He has since sold his Viper (FNG) and has been enjoying the perks of racing other people’s boats, as well as his remote control race boat (and here, too, he’s been collecting hardware). His proven skill set with regard to getting unprecedented speed from a laden bareboat charter vessel is worthy of consideration for those about to face the erstwhile Caribbean defender.

And speaking of champions, next on our BVI skipper roster is David Starck, fresh off a fourth-place finish at US Sailing’s Championship of Champions (sailed in MC Scows). Starck is noted to also be the 2022 Lightning Class World Champion. He and his brother Tom, as well as forward crew Jenna Probst, were champions of the Lightning class at the St. Petersburg stop of the regatta series this year. There’s an intended repetition of “champion” there…so as to get the point across that the Starck family and whomever will be joining them will no doubt give Sears and Co., a run for their rum.

Representing the one-design sailing talent pool that is Annapolis, Maryland, will be co-skippers Will and Marie Crump, legends of the J/80 class and overall winners from Annapolis two years ago. The two-time J/80 North American champions just missed the podium at October’s J/80 World Championship in Newport, Rhode Island, by a mere 3 points, so they will arrive in Tortola with two distinct advantages: they’re on a roll and they’ve competed in this championship once before. They know the importance of playing the long game and they know well the regatta’s six-leg racecourse, which connects the gems of the British Virgin Islands over five days of anchorage-to-anchorage races. 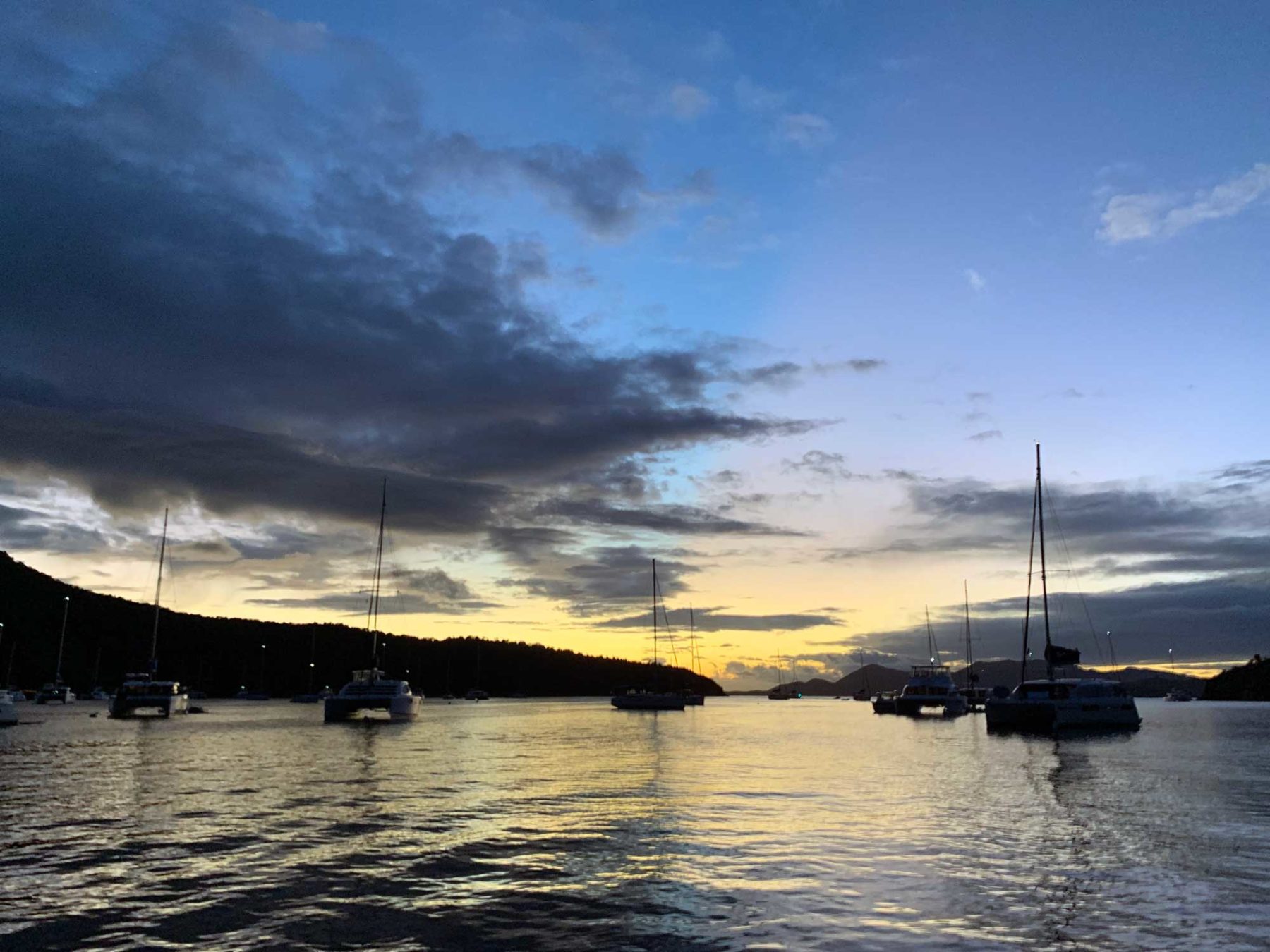 The ultimate in sleep-aboard racing is found at the Helly Hansen Caribbean Championship. No hotels here…cockpits are made for cocktails. Dave Reed

Representing the Helly Hansen St. Petersburg regatta as its Caribbean Challenger will be Tampa Bay’s favorite Melges 24 skipper Gary Schwarting, who’s been sitting on his golden ticket for more than a year. Schwarting’s Obsession team is, perhaps, the true dark horse of the fleet, and their greatest challenge will be transferring Melges 24 skills to the more displacement-oriented 46-footer. With no spinnakers onboard the charter boats, the true test is one’s wing-on-wing technique, and the commitment to poling out the jib for more than 10 miles, baking under the searing tropical sunshine.

At this year’s Helly Hansen Sailing World Regatta Series in San Diego, it was Rudolph Hasl’s immaculate and perfectly sailed J/145 that swept all seven races in its seven-boat ORC division. Those who witnessed the win said it was flawless, a testament to the team that Hasl had assembled for the inshore regatta. His yacht, Paelemon, is also a regular of the Southern California offshore racing scene, and he was once quoted about the philosophy of a winning squad: “Creating a team is critical,” he told the San Diego YC media team before the 2021 SoCal 300. “The boat needs a team that enjoys working together and knows the boat and its sailing conditions very well. We all need to depend on one another during a race of this nature. We need skilled drivers and trimmers. We need the crew to be able to adjust during the race to the changing conditions, including sail changes and the ability to take care of problems that are likely to arise.”

This, of course, will apply equally to the Caribbean championship, with the exception of the sail changes. More like…changes to the sail trim…or changes to the playlist or the cooler rotation.

The biggest challenge for our Chicago-winning co-owners Gary Powell and Scott Rhulander, was accommodating the oversized crew pool of friends and family that make their Beneteau 40.7 Mojo such a successful program. How could they possibly leave anyone back home?

Their solution was to simply get a bigger boat—duh. While the Caribbean Championship has traditionally been a strictly one-design experience, a limited monohull inventory at Sunsail’s Tortola base and a larger-than-ever fleet for the Championship has opened up the opportunity to include larger boats, which will be scored using a reliable and proven scoring scheme, which regatta PRO Dick Neville will deftly apply.

When once asked by the editors of hometown sailing rag Spinsheet Magazine what keeps the crew working together? Annapolis J/105 co-owner Cedric Lewis said, “We never get down on ourselves. If we have a bad start, we set smaller goals, like ‘let’s pass two boats on this leg!’ This keeps everybody engaged and working together. We are all friends and like to do things together on and off the water.’”

That’s the formula that earned Cedric Lewis and partner Fredrik Salvesen and their team on Mirage the berth at this year’s Annapolis regatta. When selected at the conclusion of awards that day, they were ecstatic and also shocked. After so many years of winning their class and never getting selected, they were sure the selection process was rigged against them. A big team with a big cast of regulars, their challenge—like their competitors from Chicago—their inclusive solution was to charter a big cat and fill it with crew. Fresh reserves are key. 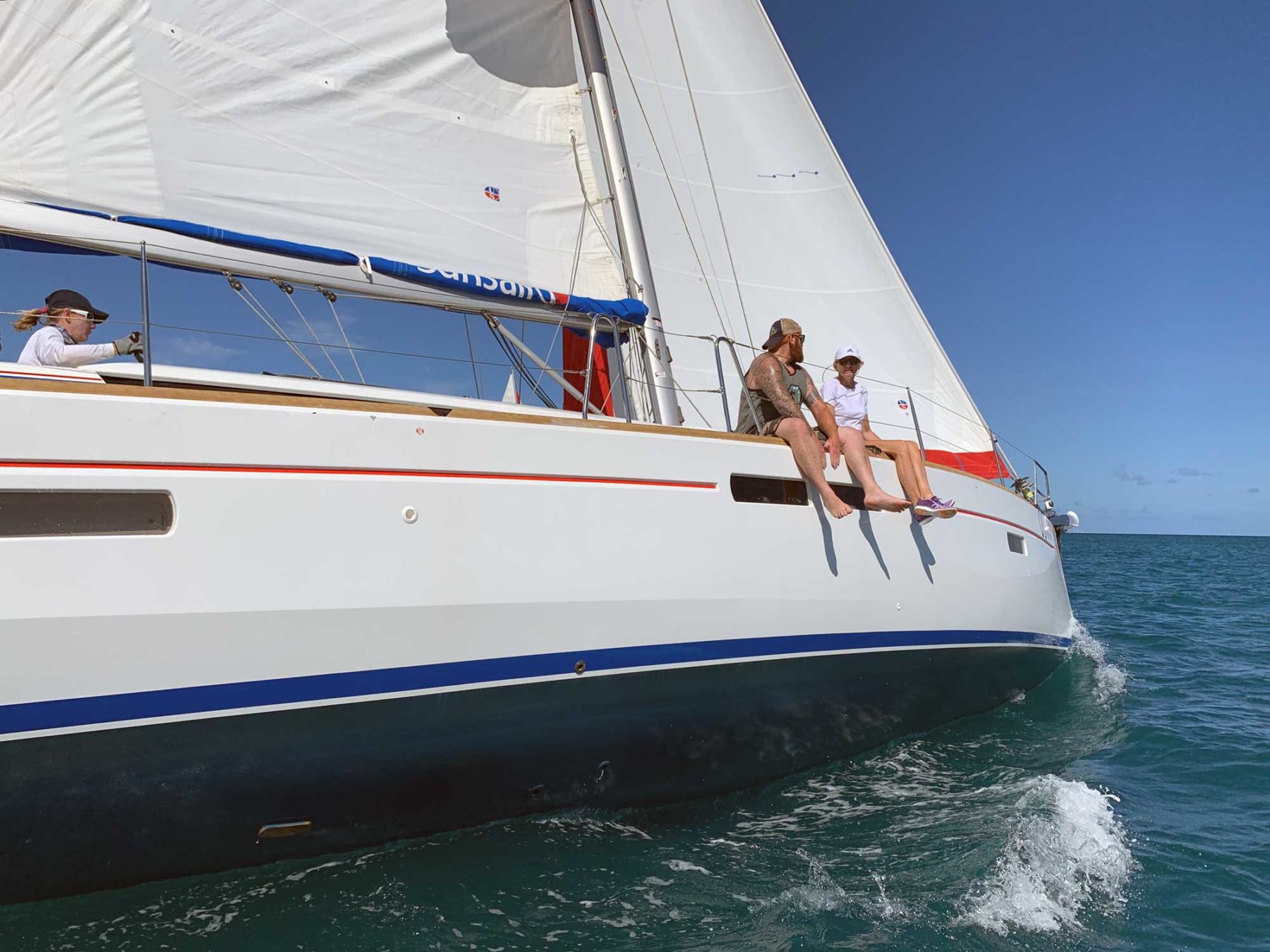 There’s plenty of rail time on the Caribbean Championship, with maximum Vitamin D and views to admire for miles.

For competitors of this challenge, fair warning is given to the true dark horse of Stephen Hosch’s Team Omaha. Yes. Nebraska is where this squad will hail from and Capt. Hosch has sailed the BVIs either 29 or 30 times, so many he can’t recall. He teaches sailing, and is just one of the finest gentleman sailors to have ever joined the regatta. He competed years ago in the Caribbean Championship and even today recalls one of his greatest sailing memories: nipping Jims and Co., at one finish, by inches.

On the roster is an unknown squad that calls itself the “Snipers.” They’re sharp shooters, but rather Snipe sailors from Bow Mar, Colorado, not far from Denver. They once competed at a Helly Hansen Regatta in the Lightning fleet and caught wind of the championship. David Baker, who owns his piece of the Sunsail charter fleet, thought what the heck, let’s jump in and see what this is all about. With plenty of experience cross-cutting Sir Francis Drake Channel in charter boats, he knows where the wind shadows lay, and he knows the importance of a proper jib-pole technique, which is also critical in the Snipes they race. One could suspect they’d be one of the faster teams on the run, of which there are many to come. 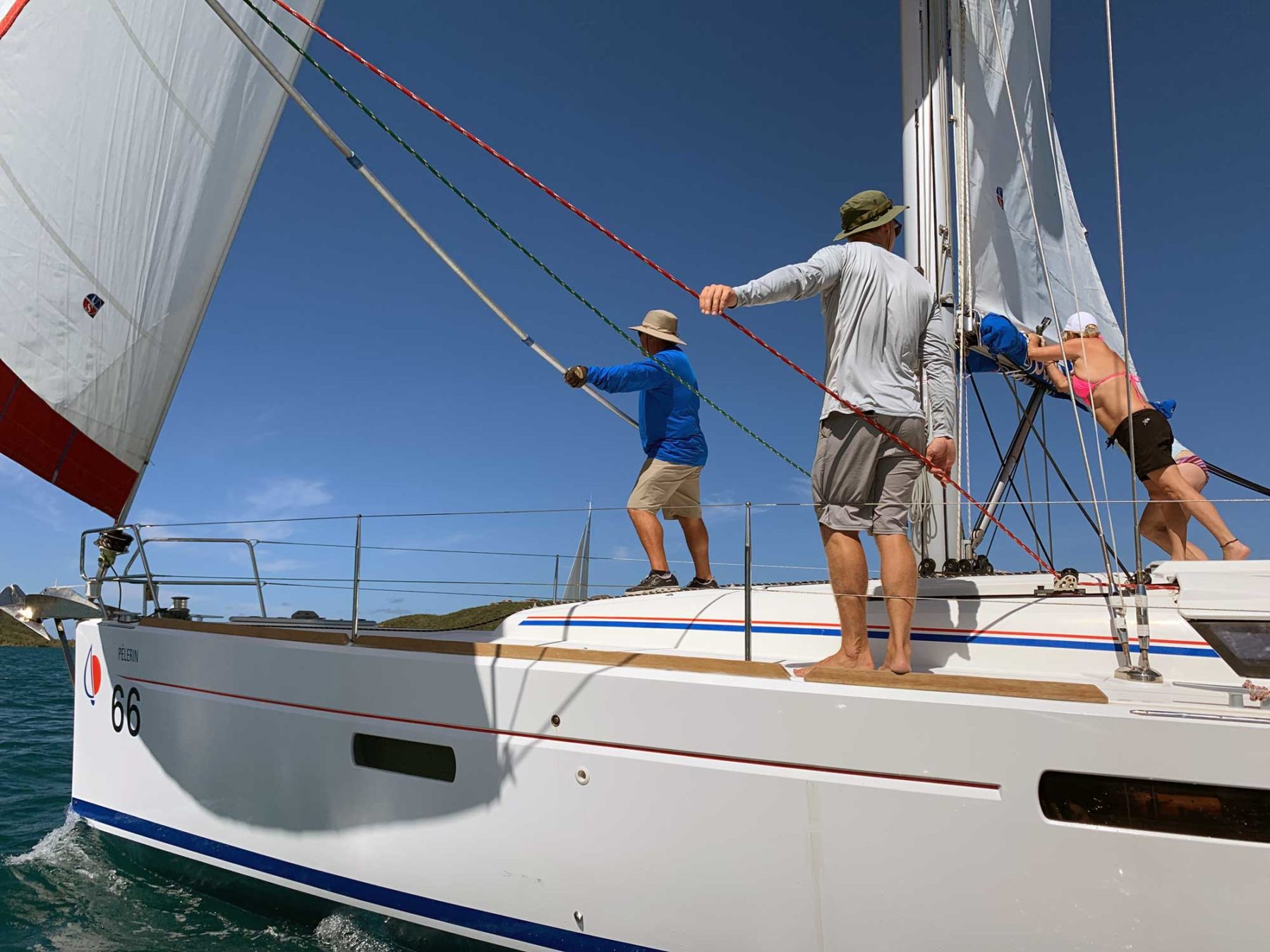 The championship begins on October 21 with a five-day circumnavigation of Cooper and surrounding islands, followed by a leg from Cooper to Virgin Gorda where the sailors will enjoy a layday and respite at the iconic Bitter End Yacht Club. Then comes the long downwinder to Jost Van Dyke, and the next-day’s sprint to Norman Island. Buoy races on the final day will provide them opportunity to put their newfound bareboat skills on display, and serve to break any tie, should that come to be. And we expect it will.