A Gulf Stream Crossing at Night 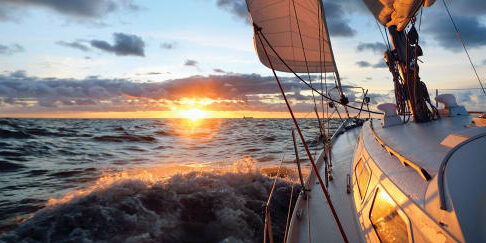 Even the dome of light glowing above the city behind us had disappeared as if swallowed in a gulp by Noah’s whale. The moon was absent. Not a star twinkled overhead. The night was so dark we could have been floating in a pot of black ink. The only artificial lights to be seen were those of the fore and aft running lights and the barely illuminated compass on the cabintrunk. Bioluminescent microorganisms stirred by our passing, shone faintly in our wake. Waves hissed as they swept past underneath us, lifting our stout, New England-made 30ft cutter, Kluane, (an Athabaska name meaning “big fish”) to heights impossible to judge in the dark. The troughs we slid down into seemed bottomless.

Less than two hours had passed since we’d weighed anchor a little after 0300 in South Florida’s Palm Beach inlet. Already we were in the Gulf Stream. This was the first ocean crossing for my wife and me, and our anxiety level was high. All was black with no demarcation between sky and water. Ahead was only darkness.

We are creatures of the light. Dark frightens, disorients, distorts. Few comforting words are said about it. The dark and our inexperience magnified every worry. Our anxieties increased by orders of magnitude.

A halyard jammed. In the dark, it couldn’t be freed. We had no choice but to lash the mainsail to the mast still halfway up. A freighter charged down on us. We crossed its stern, rocking in its wake. A quarter-mile is too close, especially after dark. The Loran (soon to be replaced by GPS, thank goodness!) crashed. Below, trying to reprogram it, I became seasick to the point of incapacity. I ceded all authority to my wife. “Sit down in the corner, and don’t get sick in the cockpit,” was her command.

She, who had worried for weeks about this Gulf Stream crossing, took over. Ever since setting out from our home port at the head of North Carolina’s Albemarle Sound, she’d cringed at the idea of the nighttime passage most of the sailors we met said would be necessary to reach the Bahamas. Finally, though, the captain of the pilot boat birthed next to us as we waited for a suitable weather window said, “Ma’am. If I were going to someplace new, I’d want light to see where I was going. Start at four, and you’ll have only two hours, most, of dark and plenty of light on the other side to find your way onto the banks.”

This brings me to what is in many ways the strangest part of all, the part I still do not fully understand. Although we were both uneasy, to say the least, about the many unknowns we expected to encounter on this, our first-night passage, neither one of us ever said, “Let’s turn back.” One reason is obvious. We had already traveled far, over 700 miles. The Bahamas were a mere 90 miles away. At the same time, though, there was something else, I think, a nautical sixth sense that would not allow our anxiety to become a disabling fear, that demanded we not turn back.

In stormy weather, the sea is angry. The wind howls and growls. Wind-whipped waves roar and crash. By contrast, the wind that night was little more than a fresh breeze. Nonetheless, the absolute darkness in which we found ourselves managed to somehow chase away rational thought, to allow anxiety to teeter on the verge of irrational fear. Frightened speculation replaced reality. Still, we persevered.

Finally, at 0545 the sky lightened. Black became gray. Soon the horizon was visible. High cumulus turned pink. Then, with surprising rapidity, the sun rose in all its glory. In celebration, a school of flying fish glided by. The waves that had been so frightening only a few hours earlier were a beautiful blue. It was nothing to untangle the halyard now that we could see what we were doing.

Our first sunrise at sea was a spiritual experience. The anxieties of a short time earlier were banished by the light and beauty of the new day. Later that same afternoon, at around 1600, standing on Kluane’s cabintop, I saw dead ahead our landmark, the water tower on the tip of Grand Bahama Island. We’d made it. Hours of light remained, both to make it safely into port and reflect on the lessons we’d learned in those few, brief hours of darkness before the dawn.

Ed Note: For more on the author’s adventures aboard Kluane, see Reflections of an Old Salt in SAIL’s April 2021 issue