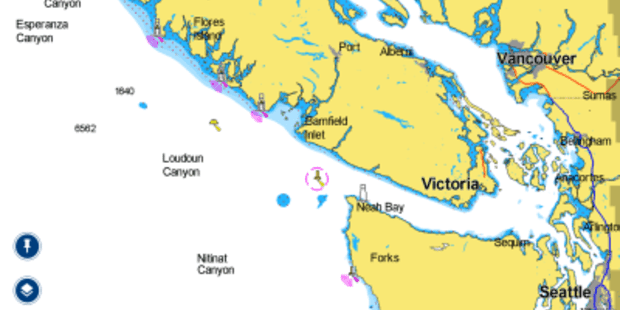 The Cruising Club of America (CCA) is a collection of 1,400 ocean sailors with extensive offshore seamanship, command experience, and a shared passion for making adventurous use of the seas. Their experiences and expertise make them, collectively, one of the most reliable sources of information on offshore sailing. In partnership with SAIL, the CCA is sharing some of this hard-won know-how in
SAIL e-newsletters.

Barkley Sound is the southernmost of a series of major inlets which dot the west coast of Vancouver Island. The entire forbidding coast is buffeted by strong westerlies sweeping in from the Gulf of Alaska and the north Pacific. Aboard Doug’s Concordia yawl, Coriolis, with Doug’s daughter Blakeley, we sought refuge in a small anchorage within the Broken Group, a Canadian Marine National Park. The swell and waves outside of a pocket of small islands were vigorous but, once we entered the offshore archipelago, conditions calmed down, although it was still cold, blowing and daylight was waning. We had little company – one other boat at a distance – otherwise, we were alone, miles off the Vancouver Island coast. A beautiful, protected anchorage.

But the bottom was rocky and we were concerned about getting a good set in the windy conditions. Once we were safely settled on the anchor in fairly deep water, Blakeley, an accomplished sailor and wildlife biologist, excused herself and stepped down into the inflatable to explore. We immediately retired to the cabin to get out of the chill wind.

Half an hour later, we each started glancing out the ports hoping to see Doug’s daughter returning. As the sun descended towards the mountains on the distant mainland, we discussed our concerns. While we were hesitant to retrieve and reset the anchor, we agreed that we could wait no longer for her to return without commencing a search; she did not have a radio or phone, a flashlight or her warmest clothing; we did not know if she was wearing a PFD or using the “dead man” switch on the outboard which had been operating erratically; we did not know in which direction she had departed or her plans. We were at a loss in deciding which direction to start our search. It occurred to each of us that she could be drifting towards the darkening mainland with a dead engine or she might be ashore on an islet with the dinghy drifting on its own. She could even be in the frigid and potentially lethal water.

After retrieving the considerable length of anchor chain we paid out, we first motored to the only other boat in the archipelago to enlist their assistance. We noticed that the skipper of that boat first went below and returned with warm clothes, a PFD, a flashlight and a radio before stepping into his inflatable. Together we agreed in which direction each boat would go to search.

Feeling our way through the rocky islands, we had not gone far before our dinghy and Blakeley appeared, returning in the rapidly fading daylight. She, always on the lookout for wildlife, had encountered a large gathering of seals and, fascinated, had lost track of time and light. We radioed the other skipper to call off the search.

Blakeley realized immediately that she had contributed to a mini-crisis. She fully understood our difficulty of abandoning a secure anchor to set out on the search. We expressed our relief that she was safe, each realizing that we, her “wiser” and saltier elders, had not ensured a safe environment.

The lessons learned were obvious:

It seemed an innocent enough dinghy trip, but its consequences could have been tragic and it gave us much to think about and many issues to address and remedy.

This story is reprinted from the CCA’s “School of Hard Rocks.” Sharing information about sailing safety is one of the club’s missions. Learn more.