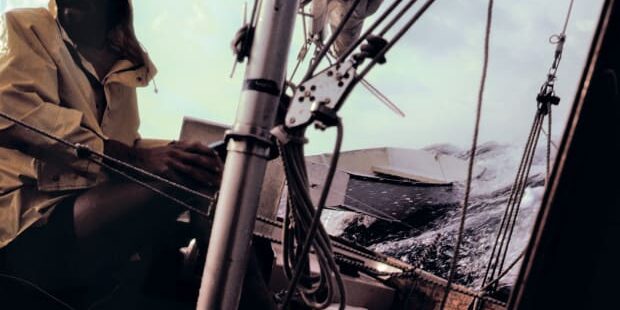 In 1980, I owned a 26ft fiberglass ketch named Recycle, a full-keeled vessel with a 10 hp Honda outboard in a well behind the tiller. An inflatable dinghy would have been nice, but I could only afford an 8ft plywood pram. She had reinforced fiberglass seams, which made her reasonably strong and watertight. I suppose I could have found a used outboard for her, but she rowed quite well, and I didn’t have a good place to carry another outboard. Although she was light enough to hoist her up on deck, there was no place to store a dinghy without causing some serious sailing and visibility problems. As a result, when it came time to cast off lines for a winter cruise from Annapolis, Maryland, to the Bahamas and back, I towed her astern.

The S/V Recycle had a cruising speed with the outboard of about 5 knots, a bit less when towing the pram. I appreciated the fact the Intracoastal Waterway (ICW) is measured in statute miles, because it meant that at a little over 5 mph, I could make 50 miles in a 10-hour day. Over the course of the voyage, I travelled more 2,000 statute miles up and down the East Coast, mostly along the ICW. I also covered 1,200 miles in the Bahamas. Three-thousand-plus miles is a long way to tow a dinghy.

The first close call came on the crossing from Fort Lauderdale, Florida, to Nassau, in the Bahamas. The wind and seas were from the southwest, blowing harder than forecast at about 20 knots. The good ship Recycle handled the 10-12ft waves quite well, with only a little water splashing into the cockpit. But the dinghy was another story. As the waves built she started surfing like a champ, occasionally bumping into Recycle’s stern. Over and over again, she would get herself turned sideways in front of an oncoming breaker only to have the painter jerk her bow back around and send her surfing down the next sea. If she had filled with any substantial amount of water, she would have been a goner. Any attempt at a safe retrieval would have been impossible. Later on, with the approach of spring, I would make a point of putting her awkwardly up on the deck for the 130-mile return crossing from the Abacos to Fort Pierce in order not to repeat the experience. The conditions during that crossing, of course, couldn’t have been easier.

The other near-disaster came on an otherwise lovely day of sailing in 10-12 knots of wind out of the northwest as we were sailing on a northeasterly heading on an easy reach from Nassau to the town of Current, Eleuthera, a distance of about 28 miles. We were on the ocean side of the bank in the Northeast Providence Channel, and I had decided to enter the bank from the south side of Little Pimlico Island. I had been through this same channel the week before when the conditions had been fairly calm. However, this time there was a good swell running from the northwest and the falling tide was creating a contrary current. In a matter of minutes, conditions went from pleasant to treacherous as the 8-10ft waves coming in from astern not only became steeper in the shallow channel, but began breaking as well. It was a classic Bahamian “rage,” and the pram was soon not only having a hard time of it, but had capsized. As it did so, the 3/8in nylon painter parted in an instant. There was another, larger boat not too far astern that seemed to see what had happened, but they were also now having a rough time of it and were in no position to help. I never even bothered calling them.

After dropping Recycle’s hank-on jib, I started the motor and, timing the breakers as best I could, turned her around into the big seas. Warm seawater washed over the foredeck as Recycle rolled to port and starboard. Although I was able to locate my now nearly submerged dinghy, there was no way to retrieve her in those conditions. The best I could do was stand by and hope things would calm down as we drifted with the current.

For some reason, I had left one of the oars in the dinghy and it was now floating free as well, as were the dinghy’s seats, which had been ripped out in the course of the capsize. After an unsuccessful try at grabbing the dinghy, I decided to try and get the oar, which was now quickly being blown downwind. Unfortunately, by the time I had the oar aboard, the dinghy had disappeared. Unwilling to give up, I began motoring in circles hoping I could find her. I also made a short run upwind and then down in an effort to expand my search pattern. By now, the waves were much reduced, as a result of our having been set at least a mile north of where the dinghy had capsized, which put us out of the worst current.

Hoping against hope, I made another quick circle followed by another last run to windward. It was then, just as I was about to give up, that I saw a faint light spot on the water’s surface to port—yes, I’d found her! It wasn’t easy grabbing hold of the last remaining bit of painter and attaching a new line, but I eventually succeeded. That done, I drained out as much of the water that was still inside her as I could and did a quick belowdecks only to discover that in all the commotion a fair bit of spray had entered through the forward hatch and soaked my berth as well. The cabin sole was also covered in dishes and whatever other items had not been securely stowed.

By now, the current had subsided, and the passage through was much easier, though there was still some current against us as we motored past Current Cay. Because it had taken a few hours getting my dinghy back, I couldn’t quite make it to the town of Current before dark, and I ended up anchoring after sunset in a small cove a couple of miles south of my planned destination. The night was calm and lovely. Even with a wet berth, I slept well.

I forget the details of how or where I repaired the dinghy, but I know I did. Later that same winter, I sailed overnight from Spanish Wells, Eleuthera, to Little Harbor, Abacos, a distance of about 50 miles. As had been the case crossing the Gulf Stream, I decided not to put the dinghy on the deck, but I should have. It was blowing a nice northeast trade-wind breeze of 20 knots, mostly on the nose, and it was rough. Still, the dinghy survived, and so did I. By the time I got back to Annapolis, I’d had plenty of time to contemplate various other ways of stowing a dinghy that would put it at much less risk in the event I ever decided to make this kind of trip again—which I did. But that’s a story for another day!

Cruising: Find Your Own Adventure
September 22, 2022