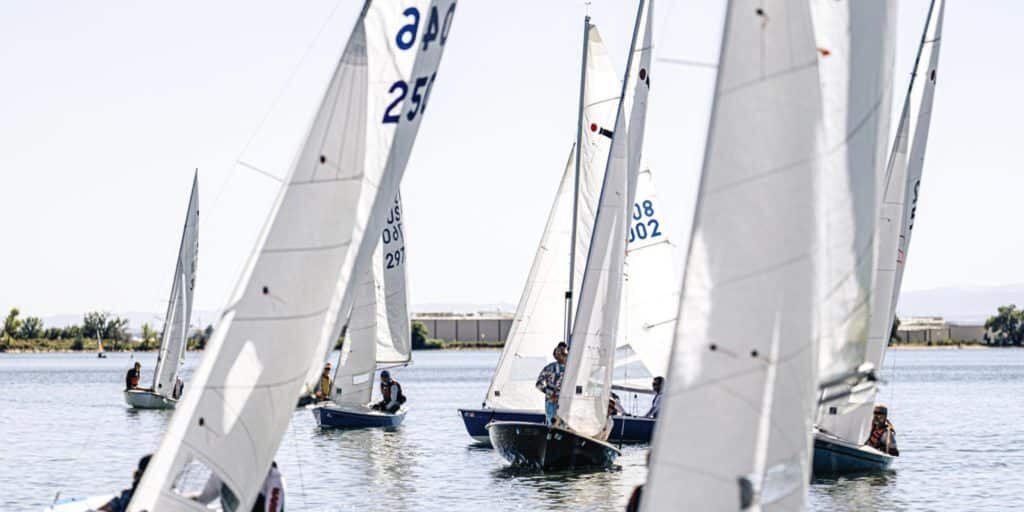 With Snipes, Mutineers and a smattering of other classes, there’s plenty of opportunity to mix it up on Sunday afternoons. Elliot Whitehead

It’s just before 1 p.m. on a weekend afternoon in mid-August, and Snipe sailors are rigging their boats. There are eight of them, including one that my daughter, Meredith, and I have borrowed; it’s our first time racing together in years. The fleet ranges from 40-year-old boats to a pristine new model, and the plan is to get in three races before the afternoon thunderstorms roll in.

We’re racing out of the Union Sailing Club on Union Reservoir, in Longmont, Colorado—not exactly what comes to mind when you think of sailing. But adhering to the “if you build it, they will come” model, a determined group of locals, along with a number of transplants from more known sailing venues, have been making it work since 2004. The Snipes, Union’s largest fleet, race on the occasional Saturday afternoon. On Sunday afternoons and Wednesday evenings, anyone who wants to race shows up with whatever boat they have and are part of one to three mass-start races. Typically, those include not only Snipes but also assorted dinghies, from Lasers and Melges 14s to MC Scows and Mutineers—often 10 to 20 boats.

Juniors not only sail in the local program but are also a key part of weekend crews for the adults. Elliot Whitehead

Their playground is one of the few natural lakes in Colorado—a 736-acre body of almost round, unobstructed water at most 30 feet deep owned by the city of Longmont. Only wakeless boating is allowed, which basically means no powerboats—a real bonus on light-air days. Except for the imposing Rocky Mountains to the west, this could be the sailing ­equivalent of Anytown, USA.

As yacht and sailing clubs go, Union is what you end up with when you strip away the ­amenities—clubhouses, bars, dining rooms, tennis courts and so forth—until it’s just the essentials: water, racing boats, a single dock, a small $300 pontoon race-committee boat, a storage and launching area, a large dirt parking area, no permanent structures, a Port-o-Let in one corner, and a large tent with picnic tables underneath. On the water, they’ve anchored nine white cylindrical marks, set up like numbers on a giant clock. The RC parks in the center and selects the marks. Simple. It’s a stark reminder to Meredith and I how little we need to practice our sport.

One of the club’s spark plugs is Ryan Schubert, a young, energetic Snipe sailor with an infectious smile and a seemingly unlimited amount of optimism. (He and his fiancée, Amanda Kremer, who is also the local Snipe fleet captain, own four of them.) Schubert was my initial contact with the Union Sailing Club. “Come join us anytime,” he told me. “I’ll find a boat for you, or you can maybe crew with someone else, or you can find someone who wants to switch off skippering.”

And when Meredith becomes available for an afternoon, he loans us one of his Snipes—in this case, a relatively new JibeTech model. When we arrive, our boat is on a dolly ready for us, cover off, sails aboard, ready to go. Talk about making it easy. Since neither of us have sailed a Snipe, Schubert goes through the nuances, especially the retractable whisker pole. And then we are off.

We squeeze in three races in light and shifty conditions, and Meredith and I are quickly reminded to always go for the pressure. After all, these are small-lake, light-air conditions. We have some solid upwind legs but struggle a little off-wind; our concentration is divided between watching for wind and sorting out the mechanics of the boat. After the first race, Kim, Adam and Daniel McBrearty, who together were aboard one of the boats that sailed by us on the run, sail over and offer encouragement.

Keeping things simple is the mantra at the Union SC, with a lot of family crews, volunteers at every level, and a basic but efficient race-management system. Elliot Whitehead

We then engage her in a short discussion about mast pre-bend at deck level, pick up some good tips, and we’re ready for the next race. We get a great pin-end start, catch a few lucky shifts, somehow hold off two nearby boats downwind, and pocket a first.

“That’s quite a comeback!” shouts Kim as they sail by. I reply that it is probably more beginner’s luck. Meredith doesn’t say anything, but I know she’s likely thinking the same thing. In the final race, we neglect to check the mark numbers on the RC boat and, a bit cocky from the previous race, we appear to lead the fleet to the windward mark only to discover that, as the clock goes, we’re an hour off—­heading toward the wrong weather mark. On the final upwind leg, Meredith says, “It’s a good thing it’s so shifty.”

We still have a chance. We play the shifts and somehow eke out a reasonable finish. As we cross the line, our smiles are as big as they were when we won the second race.

Except for the imposing Rocky Mountains to the west, this could be the sailing equivalent of Anytown, USA.

Back ashore, sails are rolled, boats covered, and plans made for a group dinner. We both experience a strong sense of déjà vu as we realize that the post-race discussions about today’s racing are the same ones we’ve had dozens of times before at many different venues in many different kinds of boats, discussions that are happening all around the country on any given Sunday, or perhaps Saturday, by like-minded sailors. All it takes is a body of water big enough for a course, a basic platform from which to run races, and a sizable dose of enthusiasm. Union Sailing Club has a good handle on all three.

The post Acclimating To Union appeared first on Sailing World.