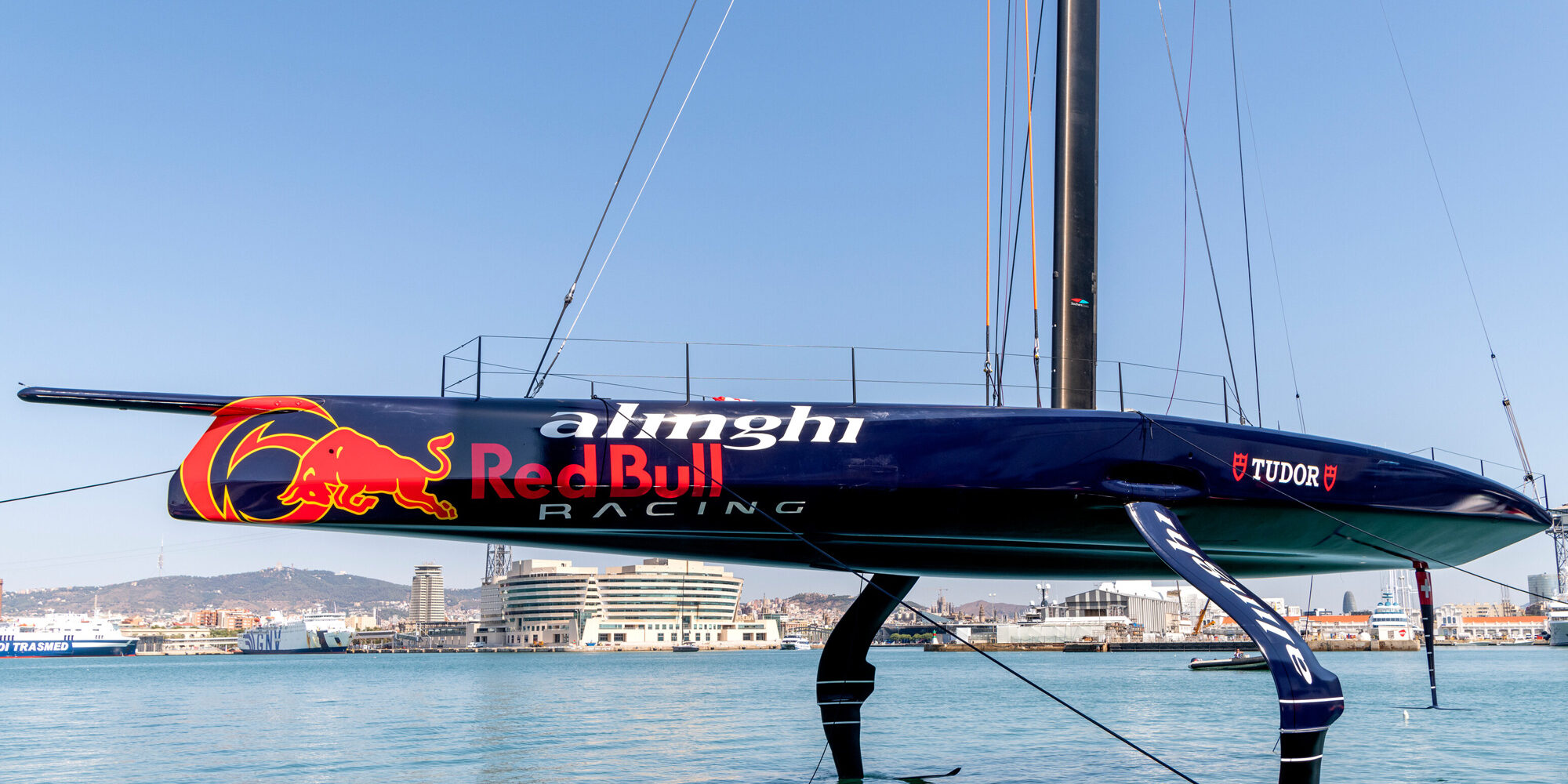 The Alinghi Red Bull Racing team, one of the most famous syndicates of the modern era in Cup history, today launched its training vessel, the first AC75 ever built that Emirates Team New Zealand used so effectively to work up for the 36th America’s Cup in Auckland.

Expectations dockside in Barcelona were palpable as the re-christened ‘Alinghi Red Bull Racing’ emerged from its temporary base shed, at the western end of the port, replete with a stunning, fresh new livery and looking ready for high octane action. Alceo Bertarelli, son of syndicate founder Ernesto Bertarelli, smashed the customary bottle of champagne on the wing as Red Bull sponsored Hazal Nahir, the trail-blazing Turkish parkour athlete performed tricks on the foil arms. It was a stunning celebration to mark the official launch of this latest Swiss challenge for the America’s Cup.

“Today symbolizes the adventure that begins in Barcelona,” commented Head Coach Nils Frei, “This first-generation boat will allow us to gain valuable training hours before we have our race boat. We are a new team sailing a boat that we are only just discovering, but to be able to train already this year is highly beneficial. If there is one thing that all Cup campaigns have in common, it is that you can never make up for lost time. And you never have enough of it! The preparations for this launch have given us the opportunity to learn to work together, and it is so important to be united towards a common goal in an America’s Cup campaign.”

Having purchased the boat early in the cycle from Emirates Team New Zealand, the Alinghi Red Bull Racing Team have been working flat-out to prepare the AC75 for its first sail, scheduled for this week, subject to tow-testing and final safety preparations. And adding experience to the Swiss team are two legends of the America’s Cup in the form of Dean Barker from New Zealand, a veteran campaigner, part of the winning New Zealand team in 2000 and recently helmsman of American Magic in 2021, plus Pietro Sibello, a finalist with Luna Rossa Prada Pirelli in the 2021 Match.

Getting an AC75 to the water and in premium condition is very much akin to the collaborative, intense work undertaken by top-level motor-racing teams in Formula 1 with a considerable team of professionals required to ensure that all the electronics, mechatronics and systems onboard are functioning as the sailors would expect. It is a big operation, requiring co-ordination and teamwork by skilled professionals and the Alinghi Red Bull Racing Team have worked around the clock to get their magnificent-looking AC75 to this point.

“The launch was a big step for us, made possible thanks to the coordination of the whole team,” commented Tim Hacket, Shore Manager for Alinghi Red Bull Racing. “We had to find our feet in a new city with new colleagues and buying a boat that we hadn’t worked on previously required a lot of hours to get used to. All these hours are learning experiences that will be useful towards BoatZero. Now that the boat is launched, we still have various checks to carry out before we can sail in a few days’ time.”

The Alinghi Red Bull Racing Team are now in place at their temporary base in the Marina Barcelona adjacent to the W Hotel to the west of the superyacht harbor and will conduct an intensive training program under the watchful eyes of the senior members of the team as the young, talented Swiss sailors are put through their paces. Learning will be at a premium as Pietro Sibello, Sailing Team Advisor commented: “Managing an AC75 is a major part of an America’s Cup project. You must respect every stage despite the excitement. Being part of this team and being able to pass on our knowledge, alongside Dean Barker, means a lot to me. We have complementary experiences because we come from different teams, and this will allow us to get the best out of each other and to then pass it on to the young and talented Alinghi Red Bull Racing crew.”

Skipper of Alinghi Red Bull Racing, Arnaud Psarofaghis, will be helming the boat throughout the permissible training period and crew will be rotated in and out as the schedule progresses. Analysis of performance in all areas will be key and the eyes of the Cup world will be watching intently to see how this new team develops. “BoatZero will allow us to gain the necessary experience on the AC75. Despite the satisfaction of today’s festivities, we are aware that there is still a lot of work to do to catch up with the level of the teams that raced the 36th America’s Cup. But today has given us the energy to focus on the next step: sailing,” commented Silvio Arrivabene, co-General Manager and Head of Technical Operations.

Welcoming the Alinghi Red Bull Racing Team to Barcelona was Grant Dalton, America’s Cup Event CEO: “The fact that we already have a team based in Barcelona and already sailing here only four months since we announced the venue is a true indication of what the 37th America’s Cup is going to be like in Barcelona. So, all credit to the team at Alinghi Red Bull Racing, this is the measure of this highly professional team that they have hit the ground running on their campaign and are taking every opportunity to get sailing onboard their AC75 as allowed for a new competitor that did not sail in AC36 in the America’s Cup Protocol. You can never underestimate the Swiss and for sure, teams will be watching their progress intently through the joint reconnaissance program, unique to this Cup cycle, with a lot of interest.”

Speaking just ahead of the first days of sailing, Grant Dalton added: “It’s going to be great to see Cup boats back sailing in European waters but particularly in Barcelona and we’ve got to recognize the huge contribution and collaborative spirit that the Port de Barcelona has shown to get to this point in record time. We wish Alinghi Red Bull Racing every success as they begin their journey in the 37th America’s Cup.”