At the Helm: Anchoring Instincts 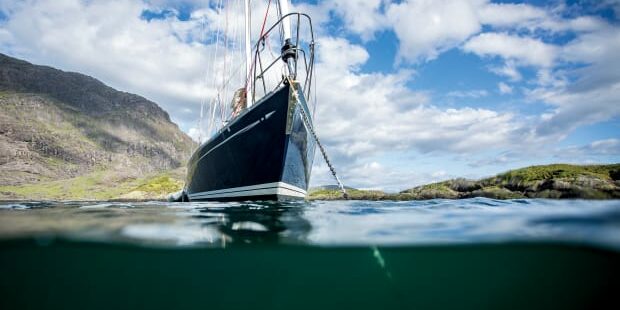 In 2015, our friends Lee & Rachel Cumberland were onboard their Tayana 37, Satori, tied to a mooring buoy in a Bahamian anchorage when a severe line of thunderstorms rolled through. The rare weather phenomenon known as a “derecho” wreaked havoc throughout the Exumas with 100-knot gusts and torrential rain. At the height of the storm Satori’s mooring lines parted. In darkness, Lee ran to the helm, started the diesel and drove the boat full speed onto the only clear stretch of sand in the harbor, effectively beaching the boat in order to save her from the rocks.

Meanwhile, 50 miles to the south in Georgetown our friends Tom and Darlene Herrington onboard their Ericson 35, Jubilee, had trusted their anchor, a gigantic Rocna with a chain/rope rode combination, and only realized how bad the night had been when the next morning more than half the boats they had been anchored among simply weren’t there anymore. They’d all dragged onto the sandbar a few hundred yards to leeward.

There is a common joke among serious cruising sailors about the size of your anchor—if your marina neighbor isn’t laughing at how comically large it looks on your bow pulpit, it’s not big enough. The fun part? This isn’t actually a joke. Both Satori and Jubilee carried oversized Rocna anchors, the same as our Swan 48 Isbjørn and Swan 59 Icebear.

There are two sides to anchoring: 1) preparing your boat to anchor snugly for the night, and 2) actually working through the process of anchoring as you enter a new harbor for the first time. You can, and should, read all about scope ratios, the chain catenary myth, swing arcs and all that stuff elsewhere. But what I want to talk about here is anchoring instincts.

Back to prep. As with most things on a serious cruising boat, simplicity is better than complication. Deck-mounted windlasses work better than those hidden underneath a hatch. Don’t ever attach your anchor to the chain with a swivel (a common failure point). Instead, use a shackle that’s rated as strong as the chain itself. You also need to be sure and get yourself a “modern” anchor, like a Rocna, Spade or otherwise. Long gone are the CQR days, and whatever you do, don’t shop for anchors on price! On a side note, a good-old Bruce anchor is our choice for a spare/kedge anchor, as it’s easy to lash to the stern pulpit due to the nature of its hook shape.

I prefer chain and rope rode. All our boats use about 100ft of chain (enough to anchor solely on chain in all but the deepest anchorages), combined with 200ft of eight-plait braided rope rode, spliced directly onto the chain. Make sure your windlass wildcat can handle rope/chain rode combos (like our Maxwell windlasses), or that you’re up to the job of hauling in the rope portion of the rode by hand. Eight-plait flakes down way easier than three-strand and won’t kink in the hawsepipe.

Chain/rope rode combos offer the benefit of lighter weight at the pointy end of the boat for better sailing performance. The rope portion also serves as a shock absorber in a rougher or windier anchorage; which is not only more comfortable but safer—just recently, friends of ours sailing on a cat in Antigua had the chain snap due to overloading. Lastly, in a bind, you can easily cut the rope if you need to escape a hairy situation and head back out to sea. Just remember to buoy the rode first so you can go back later and retrieve your anchor! Oh, and always be sure and mark your anchor rode so you know how much you’ve let out.

Once you’ve got your gear all set up correctly, anchoring is all about training your instincts and having escape plans. I’ve seen some cruisers use rangefinders to determine safe distances from other boats or the shoreline, which I get it. But at the same time, if it feels too close, it is too close, no matter what the numbers say. I’ve got the benefit of having grown up on cruising boats, so my anchoring instincts are baked in. That said, what follows are a few rules of thumb I go by when looking for a snug anchorage so that I know I’ll sleep well that night.

1. Avoid water deeper than 30ft if at all possible. In all the exotic cruising places we’ve been to, including the High Arctic, I can probably count on one hand the number of times we’ve had to anchor in deep water

2. Leave yourself an out. It’s not just because we sail deep-keeled boats that I often anchor toward the back of an anchorage. I want room—room to escape if my anchor drags and even more importantly, room to maneuver if someone else starts dragging toward us. If you don’t have an out, find a better anchorage.

3. In tight anchorages, drop the anchor almost into the dinghy of the boat ahead of you and then drift back. If the wind or tide shifts, you’ll still have plenty of swinging room.

4. If there is a breeze, drop your anchor and rode and let the wind blow the boat back onto it before using the engine to dig it in. In the Caribbean, where it’s always windy, I rarely use the engine at all to set the anchor—the weight of the boat and the breeze alone are often enough.

5. If it’s warm and clear water, swim over your anchor to check that it’s set. You’ll sleep that much better.

So, how do we put those rules into practice? First, I’ll do a recon run, under sail if possible, to scout the harbor. I do it under sail 1) because it’s fun, and 2) because if I can complete a lap under sail, I know I’ll have an exit strategy if my engine fails. This recon run also allows me to get a sense of the geography of the harbor, assess the locations of the other boats already there (as well as how confident I am in their anchoring ability) and find a favored spot.

Sailing back out of the harbor, I’ll try to find a good lee to drop the sails and make sure they are flaked and safely stowed away before actually anchoring. That done, we’ll meander back in toward our chosen spot under power, as slowly as we can while maintaining steerage. Ideally, we’ll make our final approach to our spot of choice from directly to leeward.

I like to bring the boat to a complete stop before I call, “Lower away!” to the foredeck crew. I’ll also try and nudge the bow in the direction I want it to blow off to, i.e., the side that has more room. Likewise, I’ll veer the chain and rode manually with the windlass clutch, not using the reversing function on an electric windlass. Manually veering chain gets the anchor on the bottom as quickly as possible. In tight spaces, especially, it’s crucial to drop your anchor in the exact spot where you want it. Beware, though, that you don’t accidentally end piling the chain on the bottom, potentially fouling the hook. This is rare, but it does happen.

To start out, I’ll only veer about two-thirds of the rode I plan on anchoring with and then secure it. As the boat drifts back on the breeze (or the engine in slow astern), the rode will come up tight and the anchor will either set or it won’t. If it doesn’t set, I’ll bring it all the way back up and start again from scratch. Unless you have unlimited space behind you, simply veering more scope rarely helps set a dragging anchor. You’re also most likely now out of position as well. Start over.

If the anchor sets, I’ll back down on it with that reduced scope, gently at first, after which I’ll establish a transit bearing to make sure I’ve stayed put. Once I’m confident the anchor is dug in, I’ll veer out more rode until I have the desired scope to sleep on. After that, I’ll set up the bridle/snubber if I’m still on all chain or rig the chafing gear and tie the rope rode securely to a bow cleat to keep the anchoring loads off the windlass.

I’ve never been one to use anchor alarms. If there’s a risk of dragging on a stormy night, I’ll set anchor watches, as we did round-the-clock in Svalbard, Norway, when there was ice around.

As for the adventures of Satori and Jubilee, there’s obviously a much longer version of their two stories above, but the takeaway is a simple one: if Satori had been anchored on the same heavy ground tackle that Lee and Rachel had so meticulously prepared before the start of their cruise, and not tied to a suspect mooring buoy with old jib sheets, they likely would have come through the night unscathed, like Jubilee, instead of having to try and sleep at a 45-degree angle with the boat high and dry on the beach.

Andy Schell co-founded and runs 59 North Sailing with his wife, Mia Karlsson, offering offshore sailing adventures on their Swan 48 Isbjørn and Farr 65 Falken. They and their son, Axel, live in Sweden and sail Spica in their home waters off Stockholm. Visit 59-north.com for more information