At the Helm: Sailplans 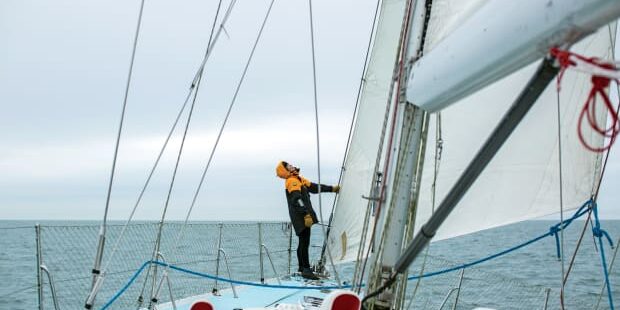 The first thing you notice when you look at the sailplan for the Farr 65, Falken, which Mia and I recently added to the fleet here at 59-North, is the sheer number of headsails. Falken was built in 1999 as a racing boat to go around the world, and the crew would have carried the maximum number of sails allowed by the rules. Of course, none of the sails would have been on furlers—this was the hank-on era—and with a crew of 16, there were plenty of hands to do the wet foredeck work. By my count, I see nine headsails in the drawing, including spinnakers.

We at 59-North, however, are optimizing Falken for performance cruising, not racing, and will not only be installing Reckmann manual headsail furling, but trimming down the headsail inventory. That said, this boat will be the best performing boat we’ve owned thus far, and coupled with her outrageously large sail locker we’ll have a little more flexibility in choosing our inventory compared to our Swan 48, Isbjørn, and our Swan 59, Icebear.

As a starting point, Isbjørn and Icebear, which both serve as my sort of default ideal for most offshore cruising sailboats, have sail inventories that look like this:

In terms of hardware, the two genoas are attached to their furlers on a luff-tape groove, and the staysail and storm staysail hank onto a removable inner forestay with traditional bronze piston hanks. Another option is to fly the two smaller sails from a synthetic stay, using simple webbing attachments or lifejacket-style plastic clips. With respect to the main, it’s almost universally accepted now that a deep-reefed mainsail is far more effective and user-friendly than a dedicated storm trysail, especially on bigger boats.

On our passages we always look closely at the expected weather pattern prior to setting it so see what sails we should fly. For example, if it looks like there will be a lot of beating, regardless of wind strength, we’ll change down to the small genoa while still on anchor. This smaller sail is cut flatter and much easier to tack, allowing us to point higher, especially in a seaway. It also allows us to carry full sail for much longer before having to start roller-reefing. Roller-reefing is a killer in terms of upwind headsail shape and efficiency, as a partially furled headsail creates more drag and heeling moment, and moves the center of effort aloft—exactly where you don’t want in a building breeze. It also dramatically shortens the life of the sail.

If, on the other hand, the wind forecast is calling for lots of reaching or downwind sailing, we’ll put the big genoa up, even if there’s going to be a lot of wind. When not close-hauled, a big genoa partially furled will work just fine, since the loss of airfoil shape is less critical. The boat also won’t heel as much, since you’re not hard on the wind, and the apparent wind is less, meaning less load on the partially furled sail and its accompanying hardware.

Finally, if it looks like there’s going to be any heavy weather with forecast winds over 30, we’ll pre-rig the inner forestay and staysail while still at anchor with the halyard attached and secured, ready to hoist at a moment’s notice.

On a side note: as I’ve mentioned in past columns, the most versatile sailplan of all is the Solent rig, in which the sail inventory is the same as above, but both genoas are already rigged on deck. In this iteration, the two furlers sit at the bow, one right behind the other, with the big genoa rigged on the forwardmost furler and the small genoa (often a self-tacking jib) rigged on an inner furler/stay a short distance aft. The downside to this kind of setup is the inability to tack the large genoa without first rolling it up. This can be an issue when sailing in light airs inshore where short-tacking might be necessary. However, offshore it’s no big deal.

This brings us back to Falken. At present, our planned inventory stands as follows:

• Code 0 on a luff-line furler

Unlike with our Swans, there will be no big overlapping genoas aboard Falken. A Farr 65 is a much lighter boat than either Isbjørn or Icebear, and therefore more easily driven upwind with a smaller headsail. The AP jib will likely be our go-to upwind sail. It’s very easy to tack and cut flat to stand up to high winds.

From there, when the wind goes aft, even slightly, I expect we’ll rig the jib top. This will most likely be our most-often used sail, as it’s rare that a passage is entirely upwind. The sail is overlapping, but not intended for use upwind, so we won’t be tacking it. It’s also got a much higher clew than a genoa, which serves three useful purposes in that it 1) eliminates the foot of the sail scooping up green water as the bow plunges up and down in a seaway, 2) allows for better visibility under the foot of the sail and 3) makes for a better-setting sail when running and using a whisker pole.

The Code 0, meanwhile, will be built on a luff-line with a top-down furler. In very light wind, a Code 0 can be hoisted and rigged to the bowsprit where it will not only be easier to set and douse than a spinnaker but useful going to windward (unlike man asymmetrical chute, which can only point up to maybe 50-60 degrees apparent). There is a long history of Code 0s and their development as rule-beating racing sails in years past. However, today, they’re often preferred by cruising sailors in lieu of spinnakers. On Falken, our Code 0 will serve primarily as an upwind sail, taking the place of an overlapping genoa in winds of 10 knots or less. Anything over 10 knots, and the AP jib will serve us just fine. Less than 10 knots of breeze, though, and we’re going to want something bigger.

The beauty of a Code 0 rigged on its own furler is that in light-air conditions, we can set it while leaving the AP rigged and rolled up. Then, if the wind builds, it’s just a matter of furling the Code 0, dropping it like a snake into the forepeak and unrolling the AP.

As the wind goes aft, in heavy air the plan is to rig the blast-reacher on a pole, or in lighter air and at deeper angles, do the same thing with the symmetric S2. With that setup, we’ll be able to sail angles down to 150 degrees apparent and still keep the boat moving. In even lighter air downwind, we’ll go back to the A2 and sail a hotter reaching angle of around 120 degrees apparent to keep the wind moving across the boat and our speed up by jibing downwind, zigzagging back and forth across the rhumb-line. Finally, at the heavy end of the spectrum, we’ll have the staysail and storm staysail, combined with a deep-reefed mainsail to ride out the gnarly stuff. I’ll let you know how it goes when we’ve got things up and running toward the end of this year!

Andy Schell is a veteran delivery captain and co-owner, with his wife, Mia Karlsson, of the adventure-charter company 59 North, which specializes in providing sail-training and offshore passagemaking opportunities. Visit 59-north.com for more information.