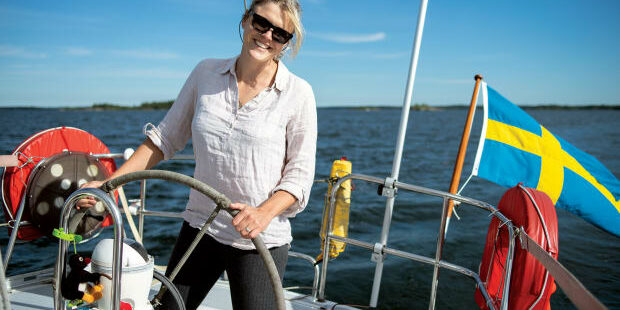 Mia and I sold Arcturus, a 1966 Allied Seabreeze yawl, circa 2015, around the same time we bought our Swan 48, Isbjørn, and got our offshore passage business up and running. We had sailed Arcturus from Annapolis to Sweden via Nova Scotia, Newfoundland and Ireland, then spent the following two summers cruising the Stockholm archipelago. We re-powered her in 2013 and then circumnavigated the Finnish island of Åland in the Baltic Sea, in what proved to be the last of our adventures on our beloved first boat. At the time, all I wanted was to sail ever bigger boats offshore. In retrospect, I suppose I took for granted all too many of the adventures we had on Arcturus.

Arcturus’s new owner, Neil, bought the boat sight unseen while on the hard in Västerås, Sweden, at the end of that Baltic summer. She was de-rigged, with the masts on a rack in a nearby public parking lot and the boat under her winter canvas cover. Mia and I agreed to help Neil launch and rig Arcturus, and then sail her the two-days out of Lake Mälaren and into Stockholm City, the gateway to the Baltic where Neil would continue his cruise.

It was during that shakedown with Neil that I think I first understood where my heart really was. After having spent a year sailing Isbjørn back and forth to the Caribbean and north to Nova Scotia, not to mention getting comfortable with her 70ft mast, heavy sails and associated hardware, I’d forgotten the joys of easy sailing on a smaller boat like Arcturus. At the end of that first daysail with Neil, I was flaking the mainsail on deck and began laughing to myself at how easy it was. The boom was at waist height, the sailcloth supple and light. The whole operation took about two minutes. How could I possibly have ever not appreciated this?

That was six years ago. Since then, Mia and I also bought Icebear, a Swan 59, which suddenly made Isbjørn feel small. The first time we sailed the big boat out of Falmouth Harbour in Antigua we hit 8.5 knots easy on a close reach bashing through trade-wind rollers as we pointed the bow south toward Guadaloupe. Her towering mast reached 85ft above the water. The sense of power you felt at the helm was palpable, the loads on the giant Lewmar 77 primaries were downright scary.

And still, the fleet got bigger. Last fall we bought Falken, our new flagship, a Farr 65 ex-round-the-world racing yacht that’s currently being refit in England. I’ve only sailed her once, but wow! She’s like Icebear on steroids. Primaries are now Lewmar 88’s powered by a central grinding pedestal. And so on…

Long before we got Falken I knew my own personal sailing would continue on small boats. When Covid hit and our son, Axel, was born, the summer of 2020 saw our big boats mothballed as the world shut down. Soon afterward, I discovered a 1977 Norlin 34 “Special” in the local classifieds, a classic racer-cruiser from the drawing table of legendary Swedish yacht designer Peter Norlin. She was a one-off, built on the lines of the standard Norlin 34 Mk 2, but with a custom deck and cockpit layout, specially made for the Gotland Runt offshore race out on the Baltic. Like all “race” boats from the ‘70s, she has a classy teak interior for living and cruising aboard. Her clean lines and deep draft make her a fantastic sailboat all around.

“Follow the arc to Arcturus and speed on to…” Spica became her name, and shortly after purchasing her, we set out for our first cruise as a family. Having gotten used to Icebear, she felt like a big dinghy. As I’m wont to say to the guests we’ve had onboard, sailing Spica is a breeze, similar to Arcturus, but more nimble. She’s also faster. Neither Mia nor I can stand up anywhere belowdecks other than right in front of the stove, but we don’t care. Mia can singlehand through a series of short tacks while I hang with Axel and “tack” his car seat back and forth across Spica’s narrow cockpit. Spica’s simple systems require a mere 200 amp hours worth of batteries, and her entire suit of sails—two spinnakers, a mainsail and three genoas—fits in the back of our VW Golf.

Granted, we’ll never be as “comfortable” aboard Spica as we are in our farmhouse back on land, but so what? “Comfort” isn’t the point. I’ve never understood why anyone would ever want to try and bring all the comforts of home onto their sailboat, even when living aboard. Sailing isn’t about comfort, it’s about adventure. On a small boat, you not only get that much closer to real, authentic adventure, you also save a ton of money and hassle in the process.

Don’t get me wrong, for 59 North, big boats are awesome in that they allow us to accommodate a big crew and share our adventures offshore in style. But having had to deal with the downsides of big boats for the past few years, I’ve seen firsthand how exhausting they can be, both physically and on your wallet! Whatever temptation I may have had to sail a big boat all my own has now been well and truly been squashed.

To me, the ideal boat size for a family like ours is somewhere around 35ft, no matter what the mission. Our 34-footer in Sweden is setup for family cruising and some racing close to home in the Stockholm archipelago. One day I’ll attempt a solo transatlantic and already have a Cape Horn wind vane in the garage custom-built for Spica, ready and waiting for when that day comes. Similarly, my dad recently downsized from a 38-footer to a boat with an LOA of 35ft. The latter provides him with everything he could possibly ever need to cruise in comfort and style from the Chesapeake to the Bahamas and beyond—and still have enough money left in his checking account to fly to Sweden and hang out with his grandson.

Andy Schell co-founded and runs 59 North Sailing with his wife, Mia Karlsson, offering offshore sailing adventures on their Swan 48 Isbjørn, Swan 59 Icebear and Farr 65 Falken. They and their son, Axel, live in Sweden and sail Spica in their home waters off Stockholm. Visit 59-north.com for more information