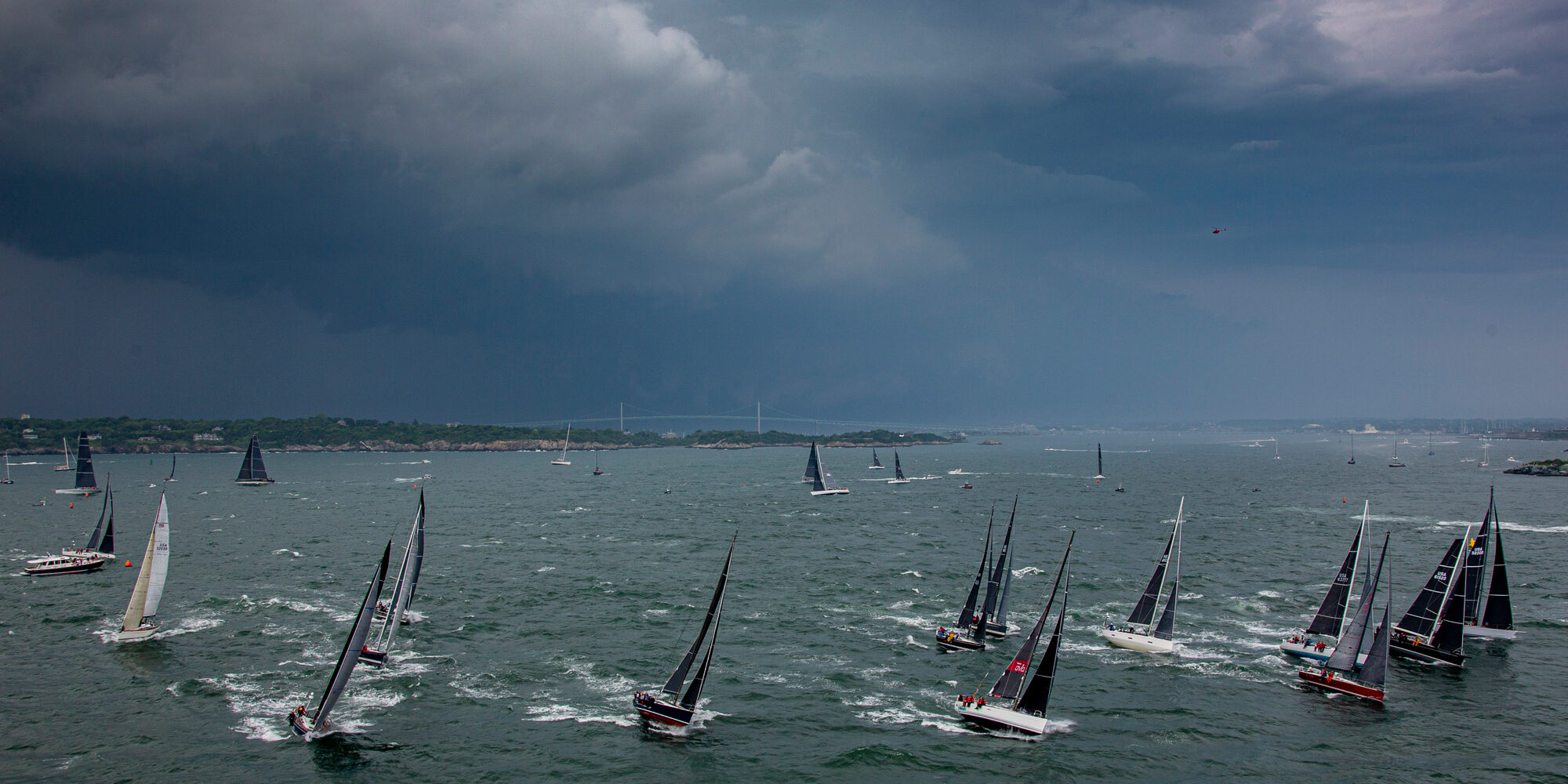 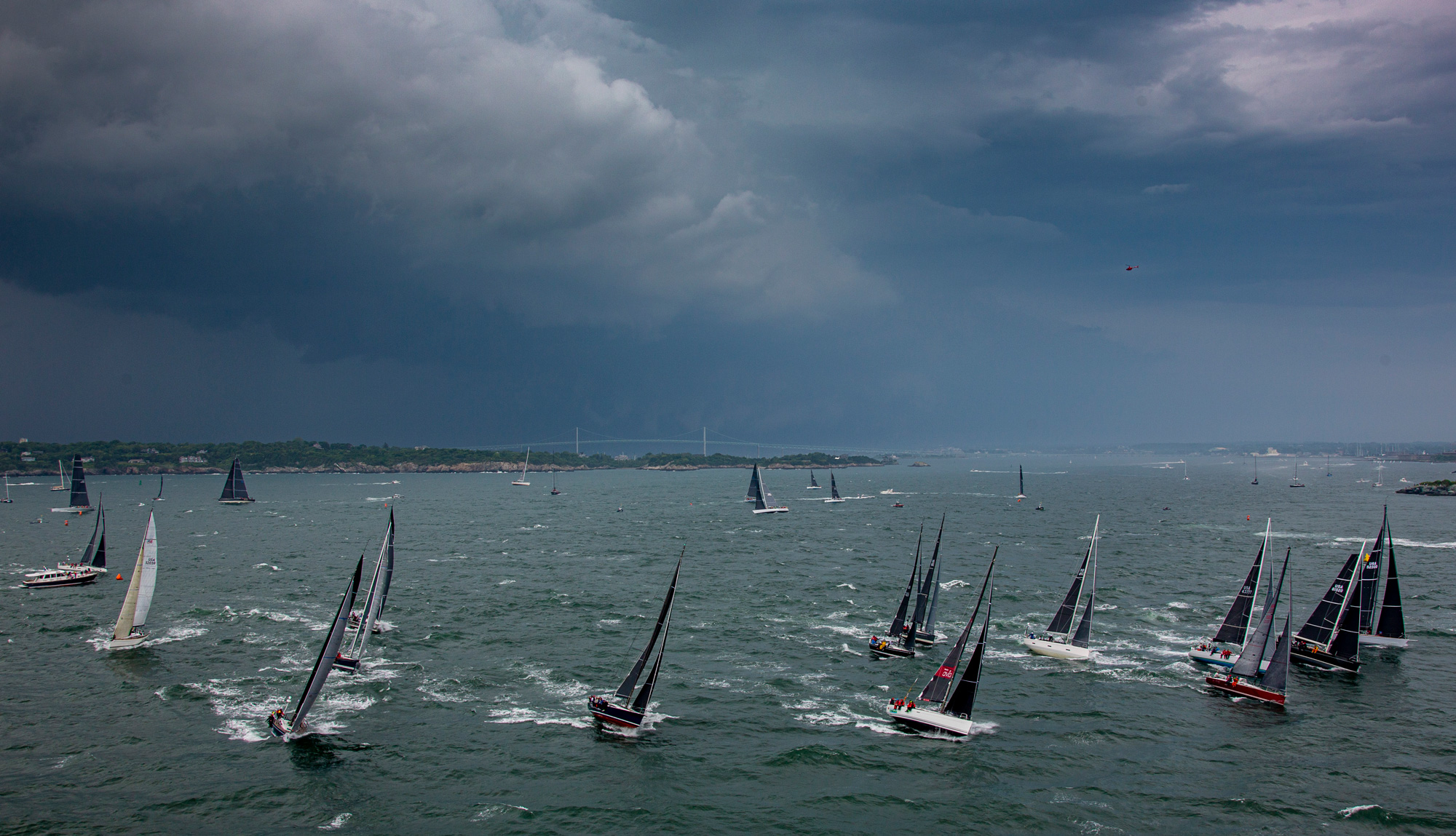 Class 16 of the 52nd Newport Bermuda Race gets away from Newport just ahead of the storm front that would becalm the remaining divisions that followed. Daniel Forster 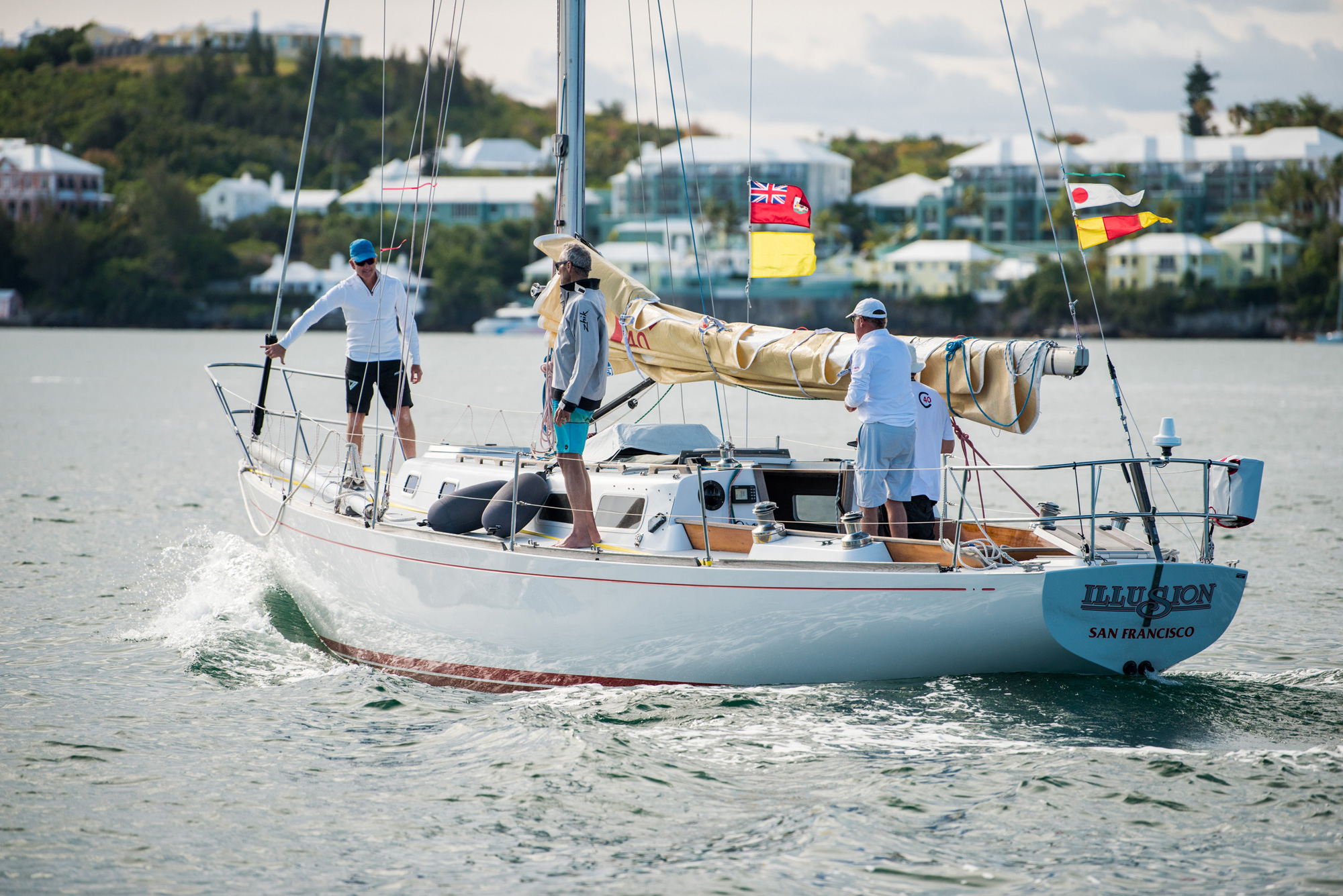 Sailing their “final hurrah” in Illusion (they’ve sold the boat to Stan’s nephew), Sally Honey said it was the perfect ending to an illustrious, 33-year run with the boat.

“The conditions were perfect for our boat, and we had a pretty good navigator onboard,” said Sally, referring to her record-setting husband, Stan. “Stan chose a really good course, and the conditions were just what the boat loves, heavy-air reaching. A lot. We got into a Gulf Stream eddy and stayed in it for about seven hours. That gave us a good boost. We managed to stay in the wind most of the way down. We had a couple of light spots, but nothing like the later boats.”

Sally Honey said that they hit a top speed of 22 knots with Buchan on the helm Saturday night. She woke up the sleeping crew with hoots and hollers of excitement, but otherwise spent most of the race with the wind on the beam.

“We didn’t have that much water on the deck,” said Sally Honey. “When reaching, the boat heels right over and the more wind you get the faster she goes. Really, it was a dream trip, fabulous. I wouldn’t change anything.”

“Our plan from the start was to crack off and get east of the rhumbline and sail as fast as we could to keep up with the front,” said navigator Adam Klyver (Fairfield, Connecticut). “But the front was elusive and we kept running into the trough.

“In the Gulf Stream, we had Warrior Won pass us Saturday morning, so we felt like we were doing something right,” said the 55-year-old Klyver, who was sailing his second Bermuda Race and first as a navigator. “We tried to stay in the middle of the Stream and found a five-knot current pushing us southeast. We probably had favorable current for close to 90 percent of the race.”

“It’s the most significant race close to home for us,” said the 44-year-old Carroll, who co-founded Hudson River Trading in 2002. “It’s amazing because only recently multihulls have been allowed in the race. It’s exciting. It’s the race people around New York City and Newport know the best; to be the record holder is cool.”

Warrior Won’s elapsed time of 56h:43m:34s corrected out to a win of 48m:47s over NEKA Sailing’s custom J/120 Desperado, captained by Leonid Vasiliev (Port Jefferson, New York), and 58m:31s in front of Darren Walters’ (Boston, Massachusetts) Sunfast 3300 Alchemist. Originally listed as the Class winner and 2nd overall in Division, Alchemist was penalized 30 minutes on elapsed time for an OCS start per the notice of race, 2.2 l.

In 2016, Sheehan won the St. David’s Lighthouse Trophy with his Xp44 of the same name. Now, after this Saturday’s prize-giving ceremony, he’ll become the first owner to take home a Lighthouse trophy as winner of both Gibbs Hill and St. David’s.

“It’s very humbling,” said Sheehan, who last year won the Transpac Race and last February the Caribbean 600. “I’d been thinking about it before the race. I had a ton of confidence in my team and my boat that we’d have a shot at the Gibbs Hill Lighthouse. There are so many wonderful records and legendary sailors in this race.”

In the Spirit of Tradition Division, the Bermuda Sloop Foundation’s sail-training vessel Spirit of Bermuda, captained by Alexander Peacock (Newmarket, New Hampshire), completed the course in 92h:25m:09s. It was the fourth time the three-masted schooner, designed by Bill Langan, has sailed the race.

In the Open Division, Charlie Enright’s (Barrington, Rhode Island) Mālama of the 11th Hour Racing Foundation, finished in 41h:28m:43s, good for the fourth fastest elapsed time in the history of the race. In the Superyacht Division, Martin Sutter’s (Austin, Texas) 141-foot steel-hulled Columbia finished in 87h:07m:34s.

“It was a lot of fun as my first real offshore race,” said Doerr, who paired with Shablinsky, his North East Keelboat Alliance (NEKA) sailing coach. “A lot of it had to do with our comfort with the boat, especially on the second night when it was blowing 30 and we were going 20 knots with the A2 spinnaker up. I feel like most boats in the doublehanded class didn’t push as hard, and we just kept pushing and made a lot of miles that night. It was different than anything I’ve ever experienced before.”