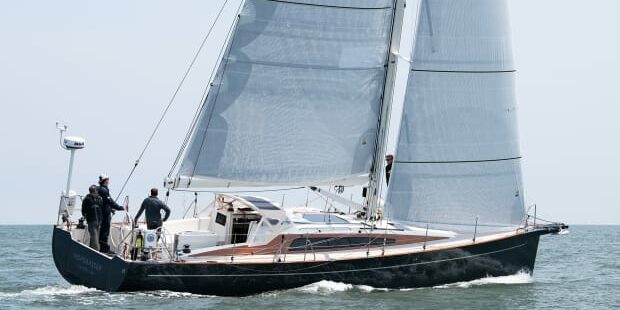 Lyman-Morse has been building fine yachts in Thomaston, Maine, ever since Cabot Lyman first joined forces with Roger Morse back in 1978. With experience creating and modifying boats built of various materials, backed by its own in-house fabrication facility, the firm has distinguished itself as one of the premier construction and service yards in North America. The product of a unique collaboration between Cabot, his son Drew, who is now running the business, and Kiwi designer Kevin Dibley, the new LM46 was conceived as an elegant yet simple performance boat that is easy to maintain and handle.

The LM46’s core design brief called for a boat that can cruise at 10 knots under sail and power with comfortable accommodations suitable for cruising, but without heavy, complicated systems like generators, air conditioning, watermakers, or bow-thrusters. Compared to many modern boats, the LM46 thus seems a paragon of moderation. The hull is not overly beamy, without a hard chine in sight. With its plumb bow, svelte, low-profile cabinhouse, clean lines, and moderate proportions, it stands out as a distinctively graceful vessel.

Construction is in cold-molded wood. The frames are laminated Douglas fir supporting four layers of longitudinal and cross-diagonal planking in Douglas fir and Western red cedar set in vacuum-bagged epoxy. The topsides are skinned in a finish layer of fiberglass. The deck and cabinhouse are molded together as a one-piece composite structure. A laminated inner keel runs the full length of the hull, with carbon-reinforced floors and girders to distribute ballast keel loads over a wide area. There are full collision bulkheads fore and aft.

The cockpit is clean and functional with full-length bench seats backed by high coamings separated by a fixed centerline table with folding leaves. Sail-trim purists will be happy to find a mainsheet traveler spanning the full width of the cockpit sole just in front of twin helm stations. Though the wheel pedestals are quite low, in the contemporary style, I was pleased to find they are complemented by discrete but useful grabrails that make it easy to move around and between the stations. Behind the twin wheels there’s a fold-down transom and a large lazarette that can accommodate heaps of gear and also affords excellent access to the under-deck steering gear.

On our test boat, Hopgrasser, hull #1 built for Drew Lyman, all working lines from the mast are led aft to a pair of Harken winches on either side of the companionway. Primary and secondary Lewmar winches aft handle the main and headsail sheets. One concession to convenience is an underdeck Selden Furlex electric jib furler.

Moving forward on the boat was a breeze. The side-decks are reasonably wide, framed by deep gunwales to keep feet inboard, with no standing rigging to skootch around, as cap shrouds are led outboard and lower shrouds run to the edge of the cabintop. The chainplates, impressively, are titanium. At the bow I found a small sail locker with a curtained-off space for a rope anchor rode and 20 feet of chain. There is also a neatly designed fixed bowsprit with an integral anchor roller ahead of a low-profile horizontal Lewmar windlass.

As designed, the LM46 has three alternative layouts. The common features are: 1) the saloon with full-length settees and a fold-out table, with a pilot berth outboard to starboard; 2) a forward head with shower, also to starboard; and 3) a forward owner’s stateroom with a centerline island double berth. The variations are all aft of the saloon. Here you can choose between having two aft berth spaces under the cockpit (they are not really staterooms, as they are wide open, with no doors), or having just one aft berth space and either an extra head or an enlarged galley, as well as extra storage space aft. In all cases, the galley is to starboard, with a proper nav station to port.

The aesthetics of the interior are superb. You feel at once you are inside a very modern boat, with a great sense of space and light, but also immediately that you are in a fine wooden structure. The innermost fir planking is all exposed to view, nicely finished, with exquisite furniture joinery, all offset by a Herreshoff white overhead and bulkheads. There is also a sense of purpose, as structural components like knees, beams, and chainplates are exposed, and the overhead is studded with hardware fasteners. Storage spaces are also mostly left open. In lieu of hard drawers, there are fine upholstered boxes with leather handles slotted into fiddled shelves—a creative but utilitarian touch.

For a performance boat, the LM46 has a relatively short rig, with an air draft of 63 feet, 10 inches, just low enough to fit under bridges on the ICW. What is lost in height is made up for by a large, square-headed mainsail with a generous roach. There is no fixed backstay to tangle with this mighty foil, and the carbon rig is instead supported by triple swept-back spreaders and a pair of running backstays. Forward of the mast, a 100-percent jib sheeted tightly to tracks on the coachroof flies from the headstay. Asymmetric spinnakers and Code 0-type sails can be flown from the bowsprit. A staysail can also be set up behind the headstay when sailing in heavy weather.

We saw nothing like that when I set forth with Drew Lyman and his prospective Bermuda Race crew on our test sail. Heading out of Lyman-Morse’s newly built Camden facility in mid-May, we were initially confronted with a very glassy Penobscot Bay. Fortunately, the gods did send a few trickles of variable breeze our way as we worked south toward the mouth of the bay.

Happily, this proved to be a very slippery boat, and we were able to make the most of what wind we found. Drew was intent on testing a new sail that he called a “tweener,” built to fly from the sprit. To me, it looked like a slightly high-cut genoa. It did prove effective to windward and carried us as high as 30 degrees to the apparent wind. Cracking off a bit to 40 degrees, I was surprised to see we were making 9 knots in just 8 knots of true wind. Turning onto a beam reach we carried almost 8 knots of speed in 9 knots of true wind. On a wide broad reach in a diminished 7-knot breeze, we still managed to make 4 knots without busting out a spinnaker. Drew advised he’d seen speeds up to 13 knots running off in a proper breeze, and that hull #2, with fancier sails and the deeper performance keel, has seen 18 knots.

Helm feel throughout was superb; smooth and positive and, like any good performance boat, quite sensitive to sail trim.

Hopgrasser carries the standard powerplant, an 80-hp Yanmar diesel turning a three-blade Maxprop on a saildrive leg. To me, this seems more than sufficient for a boat of this size and weight. With the mill turning at a moderate 1,900 rpm, we made 8.2 knots over the ground against a light current. Cranking up to 2,500 rpm, our speed rose to 9.7 knots, and flat out at 3,200 we were flying at 10.8 knots.

If that seems a bit slow, you can always check the box for the optional 110-hp engine.

This most certainly is not an inexpensive boat. But it is not an outlier. As I write, a second LM46 is already afloat, and a third is in the works. If you’re in the market for an exquisitely built but simple performance cruising boat, you can’t do much better than this.

Base price $1.1M at time of publication