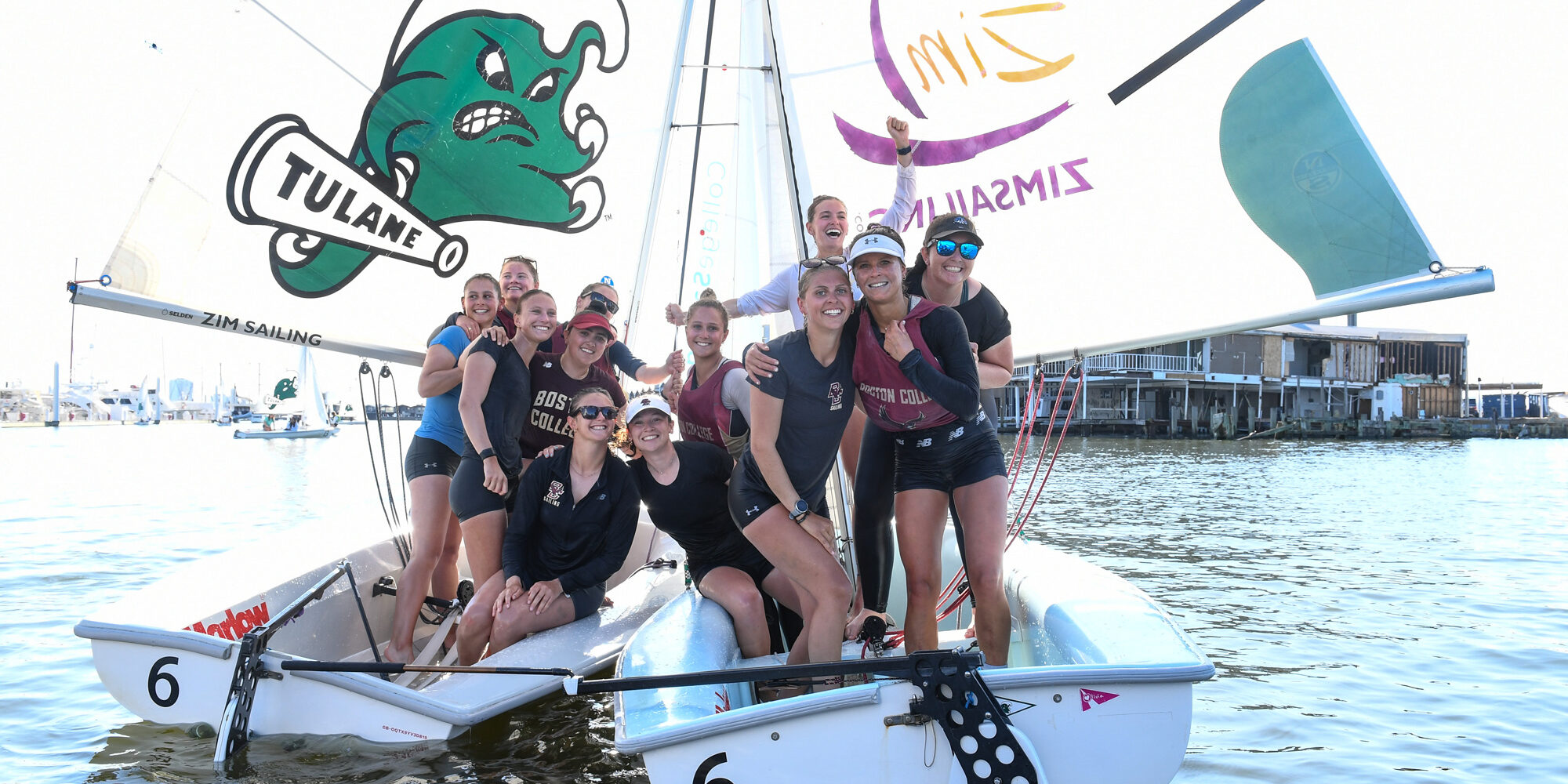 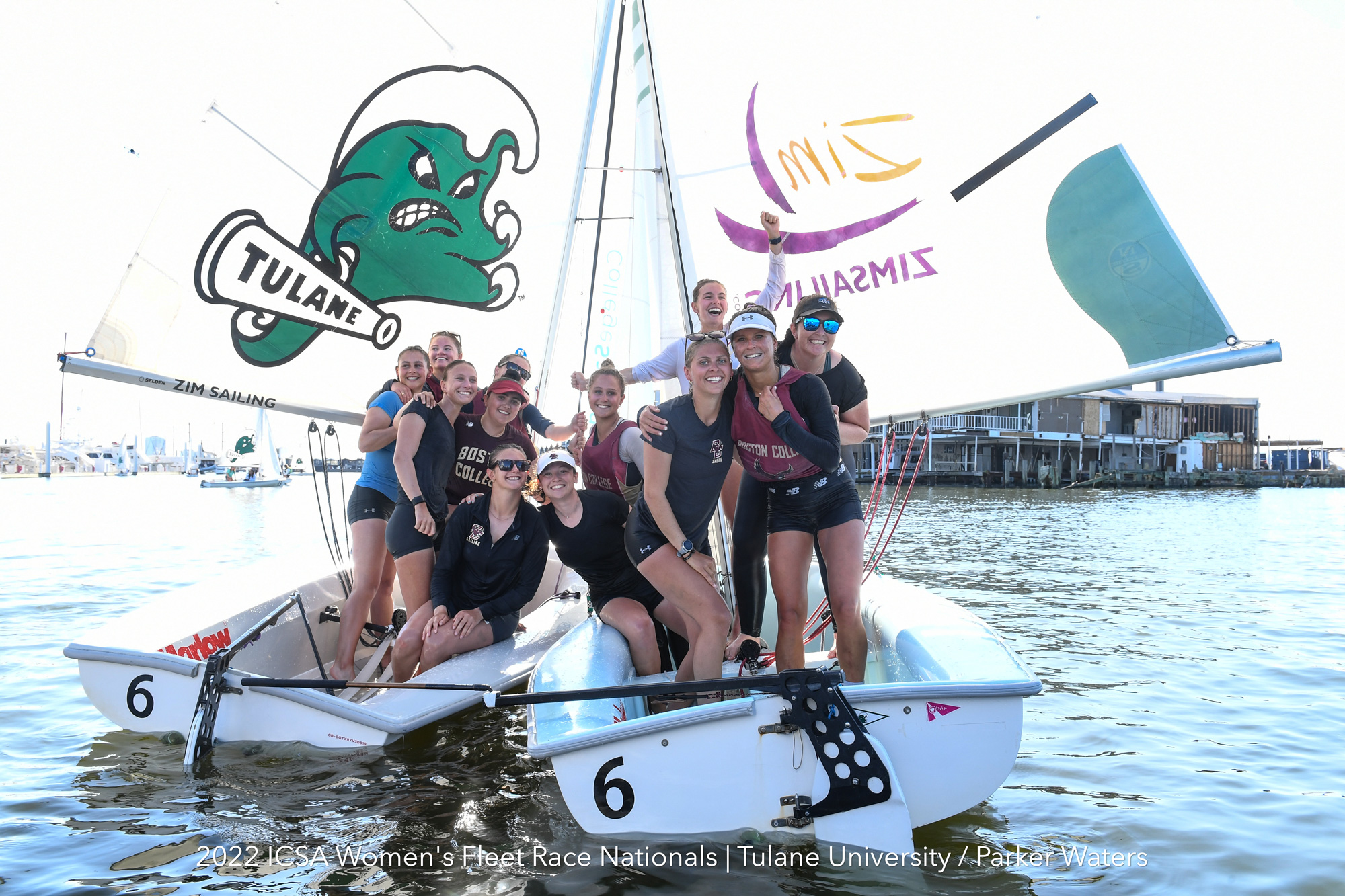 The College Sailing Women’s National Championship finals hosted at Tulane University got underway on May 25 with A Division in 420s and B Division in FJs. Competitors saw a range of conditions with breeze coming from the Southeast at 3-15 knots. Two races in A Division and one Race in B Division were completed until racing was halted for about four hours due to thunderstorms. Eventually, the storms cleared and four races in both divisions were completed by the end of day one.

“This morning was super breezy so we tried to stay flat and sail fast to the pressure,” said Harvard’s Emma Kaneti ‘22, recapping the day on the water. “Marleigh, my crew, did an awesome job hiking hard; we’re glad all the heavy wind practice this season came into use! The lighter wind in the afternoon was tricky.”

“There were a lot of ups and downs today so it was crucial to be flexible,” said Caroline Bayless ‘23 of Brown University. “Also, with so much time on land it was important to mentally check back in every 30 minutes.” 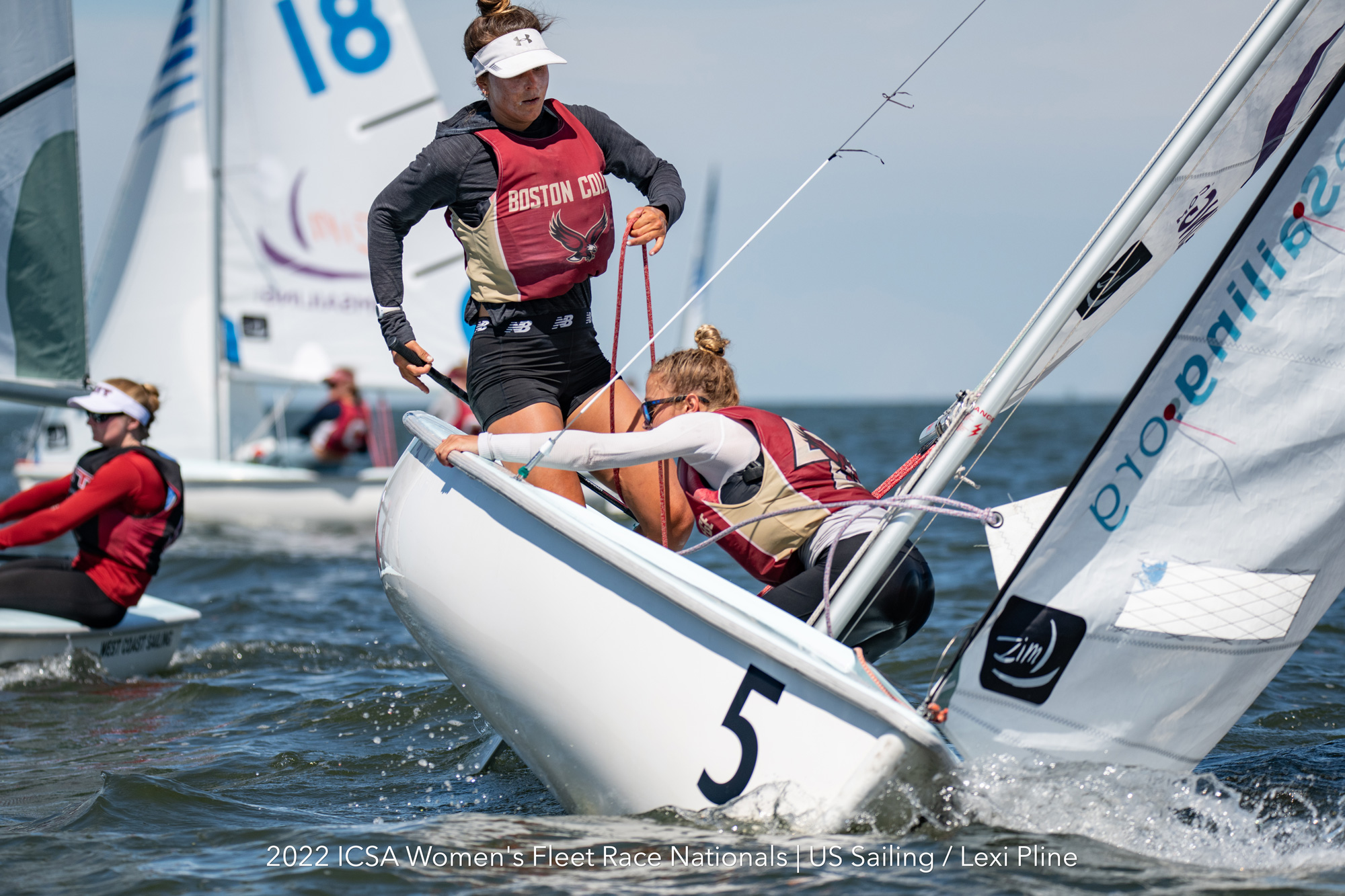 Bayless’ crew, Madeleine McGrath ‘22 said, “As usual, sailing with your head out of the boat was key. Today was fairly shifty so if we played the shifts well and had good boat speed and fleet management we’d be pretty successful.

Greg Wilkinson, Head Coach of Boston College stated, “I’m just proud of our team. And I’m especially happy for our seniors. They graduated on Monday and now they’re National Champions. So happy for them.”

Sophia Reineke ‘22, Laura Ferraris ‘22 and Sara Schumann ‘25 of Boston College won A Division with a total of 45 points. Michelle Lahrkamp ‘23, Grace Austin ‘24 and Sammy Pickell ‘22 of Stanford finished second with a total of 57 points. Emma Kaneti ‘22, Marleigh Belsley ‘24 and Alexandra Dorofeev ‘25 of Harvard University were third with 63 points.

“Sophia and I went into the last race only to complete the goals we previously made for the regatta,” said Sara Schumann ‘25 of Boston College. “We knew that by completing our goals we’d be happy with our racing regardless of the outcome of the scores. Super stoked to experience a national championship and to get the job done with an amazing group of women.” 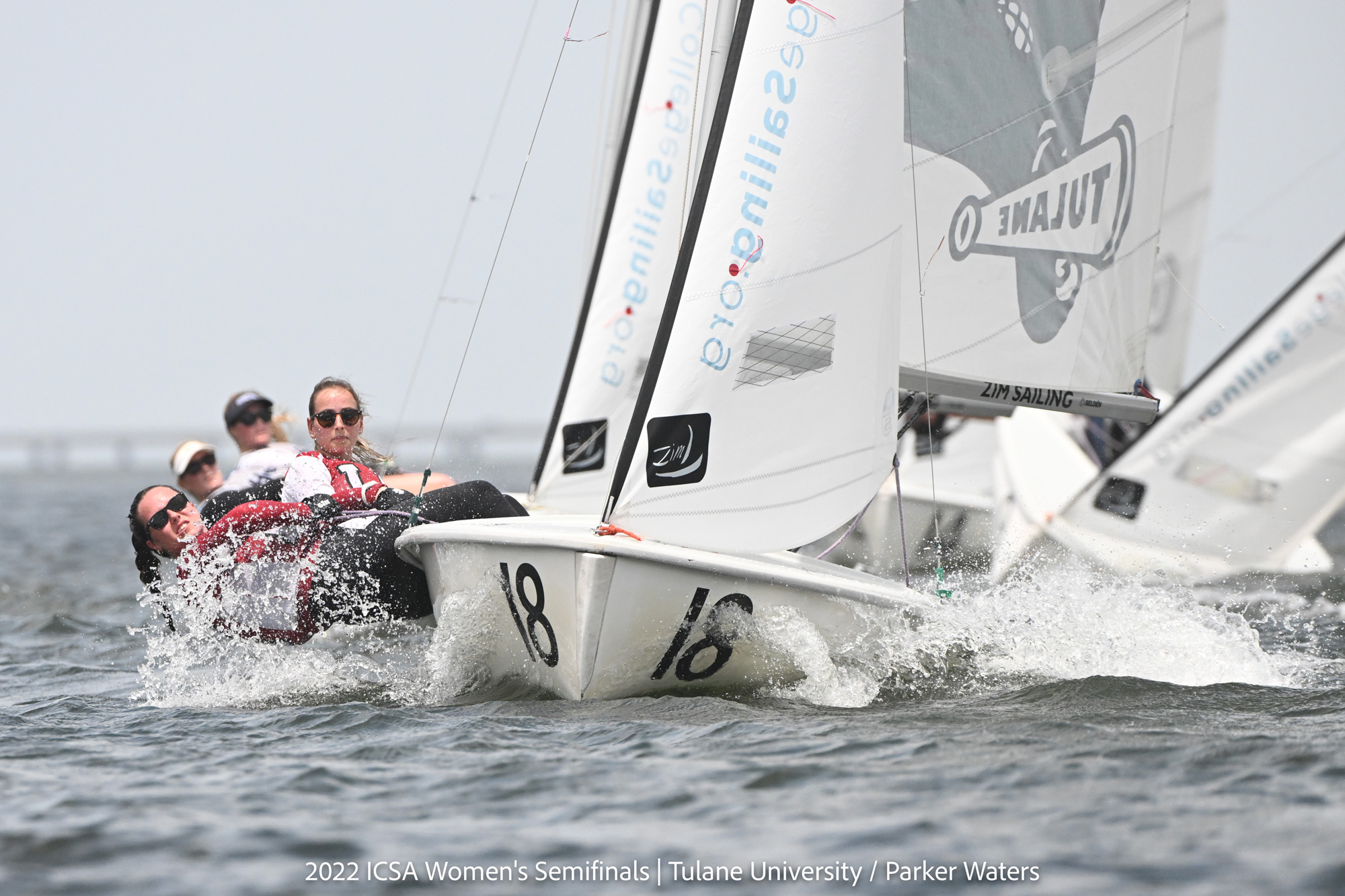 A mix of conditions provided challenging conditions for the Colleges Women’s National Championships in Tulane, from the semifinals through to the final races. Parker Waters/Tulane University

Emma Cowles ‘25, Mia Nicolosi ‘25, Ximena Escobar ‘25 and Anisha Arcot ‘23 of Yale topped the B Division with a total of 41 points. Following them were Hallie Schiffman ‘23, Stephanie Houck ‘21, Hannah Freeman ‘24, Gwendolyn Donahue ‘24, Abigail Tindall ‘23 and Patrica Gerli ‘23 of Stanford and they finished with 62 points. Rounding out the top three were Lilly Myers ‘23, Bridget Green ‘25, Jana Laurendeau ‘23, and Gabbi DelBello ‘23 of Cornell University, finishing with 68 points.