Bowsprits: Why They Make Sense 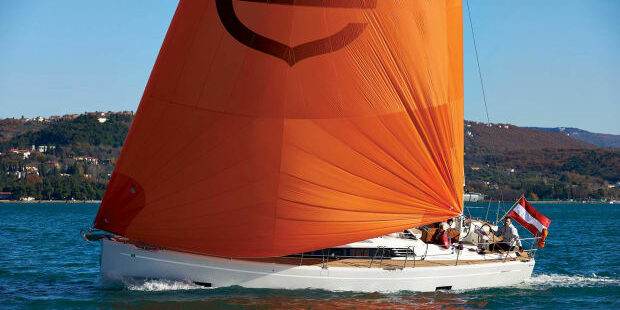 There is, of course, nothing new about bowsprits—sailing ships have been using them for centuries. That said, these days they are more popular than ever on cruising boats, thanks to advances in sails, sailhandling technology and boat design in general. With today’s furlers, an asymmetric spinnaker or Code 0 can be set up by a single person before casting off lines and then stay rolled up until it’s ready to be used. When that time comes, it’s a simple a matter of unfurling it, sheeting in, and you have a spinnaker! Taking the sail down is almost as easy—ease the sheet and take in on the furling line. The result is an eminently manageable sail that would have been almost impossible for a single cruising yachtsman to handle in decades past.

Paralleling the obvious advances in furler design in recent years have been equally dramatic changes in yacht design. The IOR rules of the 1970s did much to determine hull shape, but the demand for faster, more easily handled boats and increased accommodation have changed yachts dramatically. This in turn has resulted in big differences in rigs. Gone are the short stumpy masthead rigs and vast overlapping genoas allowed, without penalty, by the IOR, to be replaced by tall, efficient high-aspect-ratio rigs. Lighter, stronger mast sections and materials have allowed rigs to go higher still. By moving the mast forward in a boat, designers are able to better open up the saloon. Similarly, by moving the chainplates outboard and attaching them directly to the hull, the need for tie rods belowdecks is eliminated, further increasing the open feeling of the accommodation spaces at the same time it reduces manufacturing costs.

Over the last 15 years, bows have also become more vertical, so much so they are not only often plumb but will on occasion even be tumblehome. This improves sailing performance as the static waterline length and forward buoyancy in the hull increased. However, for cruising sailors the trend has been a problematic one as plumb bows and anchors are not good bedfellows—the former inevitably attracting the latter as is evident in the many battle-scarred stems now seen in marinas around the world. To right this wrong, a bow rollers started protruding farther and farther forward. As an added benefit these new quasi-sprits created an excellent potential tack point for reaching sails forward as well.

As for those aforementioned outboard chainplates, they may do a good job of reducing loads on the mast and rigging. But to get good windward performance, jib and genoa sheeting angles (the distance from the headsail’s clew to the centerline) need to be as small as possible, which quickly becomes a problem for any overlapping genoa that has to go outboard of a set of outboard shrouds. This, in combination with today’s high-aspect rigs and their increased “I” measurement (foretriangle height) and reduced “J” distance (foretriangle base) has resulted in narrower and narrower jibs: from 150 to 130 percent down to 110 percent or less. Not only did this increase upwind performance, as it allows for tight sheeting angles, it also made sailhandling easier, since a shorter foot can be tacked faster as half of the sail doesn’t have to go around the front of the mast before being sheeted in. Headsails of around 80 percent or less can even be self-tacking.

This, of course, is all well and good, but what about in light winds or when sailing on a broad reach? Unfortunately, this is where you start paying the penalty for this reduced sail area, as a narrow headsail loses more power at the head of the sail as the leech falls away the more you ease it out. At the same time it is easily blanketed by the larger mainsail the farther off the wind you sail. The answer? Those big off-wind sails that have become so popular of late—and the bowsprits needed to fly them.

Back in the good-old days, on older more traditional yachts aboard which larger headsails could be successfully poled out, it was easy to forget about that colorful spinnaker sitting belowdecks. As a result, many kites spent almost their entire lives under the forward berth, used only when there were crew in abundance or the weather was picture perfect. Some folks disliked the rigmarole of setting them up. Others may have had a bad experience after putting it up and then swore to themselves, never again. Either way, you didn’t often see them other than on the racecourse.

Aboard newer boats with less headsail area, however, owners quickly found an easy-to-use downwind sail was needed if they were to keep moving in lighter air, which is where today’s A-sails come in. Unlike a symmetrical spinnaker, which requires a pole to take the load from the tack and the guy, an asymmetric, or A-sail, can simply be flown by attaching the halyard and sheets, and then securing the tack to a fixed point, forward, on the yacht—preferably as far forward of the mast as possible. With bow rollers now protruding forward to help spare many boats’ stem it made the perfect location for a tack point—although many need to be reinforced to take the upward load as they were designed for the downward load of the anchor chain.

As furling systems became ever smaller, and sailors began by using a single continuous line to operate them, often in a top-down configuration, the demise of the symmetric spinnaker only accelerated. As mentioned earlier, although symmetrical spinnakers are better for sailing dead downwind, once rigged, a furling asymmetric can be set, jibed and furled by one person, all from the safety and comfort of the cockpit. No longer did the crew have to dance around on a rolling foredeck, wielding a long pole while shouting instructions back to the person at the helm.

Of course, there is also the cheaper alternative of using a snuffer, or sock, but this requires someone to go forward to launch or recover the sail, and the sail can’t be left in position when not in use. Granted a good furler isn’t cheap. But there is no better way to extinguish a sail with the pull of a rope.

To get the best performance advantage from whatever kind of reaching sail you’re flying, the tack, and by extension the end of the bowsprit, needs to be as far forward of the genoa as practicable, while still retaining the support needed to take the loads generated by the sail’s luffs. With this in mind, many yachts now incorporate carefully sculpted bowsprits in their hull designs, with the sprits taking on a variety of shapes. Some yacht designs, notably those in the J/Boats line, take things to the max in terms of length with their retractable composite bowsprit. Others are much shorter and fixed and also include an anchor roller, like those found in the Beneteau, Jeanneau, Dufour, Hanse and Dehler lines. Still others, in the same vein as the J/Boats’ sprits, function purely as anchor points for reaching sails to save weight. In some cases, multiple sprit types are available as an option for a particular model depending on the owner’s sailing style—examples include the multiple sprits available aboard boats in Denmark’s X-Yachts line. Of course, sprits abound in the multihull world as well, in the form of everything from the short composite or aluminum sprits found on cruising boats like those built by Lagoon, Fountaine Pajot, Bali and Neel lines to the dramatic sprits found aboard more performance-oriented catamarans, like those built by Balance, HH, Gunboat and Outremer.

A-sails are great and cover a wide apparent wind angle, from 75 to 170 degrees apparent, depending on their cut and size. In the past, aboard a boat with a smaller headsail area, if you were trying to sail on a broad reach or run in less than around 10 knots of true wind it would typically be time for the engine—either that or sailing folk in the 1970s would start humping a large lightweight No. 1 ghosting genoa up on deck. These days, though, sailors have a range of furling genoas, asymmetrical spinnakers and the increasingly fashionable Code 0 to turn to.

Although Code 0s were originally created as racing sails, they are now popping up aboard an ever larger number of cruising boats. Code 0s are usually lightweight nylon or mylar and furled and stowed while not in use; they aren’t intended to live rigged for longer than they are in use. Because of the loads and the luff rope within, a Code 0 will often require a bobstay to help the bow roller or bowsprit take the loads.

Note that no matter what kind of continuous-line furler you use, the luff of the A-sail has to be short enough not to hang down over the furler. It also needs to have a shallow enough draft to allow it to roll away. For these reasons, using an existing symmetric sail and converting it to a furling asymmetric is often highly problematic.

Again, asymmetric sails invariably benefit from longer bowsprits, as they enable them to be carried much deeper downwind and get them out from behind the main. Racing sailors aboard larger boats will often have a variety of reaching sails at their disposal. However, cruisers tend to just use one, a cruising chute, i.e., an asymmetric spinnaker that has less sail area than its racing counterpart and narrower shoulders (the top of the spinnaker) making it easier to handle and less fussy when it comes to trimming.

A-sails vary in fullness: if a sail is cut flatter that means it is designed to sail higher to the apparent wind, the deeper the draft the farther off the wind the sail can be used. Sails also vary in size, as foot length is typically 1.6-1.8 times the length of the J (foretriangle base) measurement and a percentage of this measurement at a distance halfway up the sail (known as the mid-girth measurement).