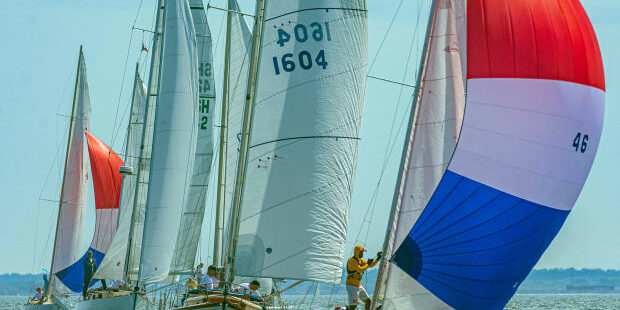 The 24th running of the Corinthian Classic Regatta, held August 13 and 14, is a testament to the beauty of traditional and modern classic racing yachts and offers a chance to look back at the yachting legacy in Marblehead and also look forward to the future. This year’s regatta featured 31 vessels in six divisions ranging from the 115-year-old Herreshoff design Neith to Contemporary Classics like the CW Hood 32.

Hosted by the Corinthian Yacht Club and sponsored by Doyle Sailmakers, Hinckley Yachts and other marine companies, the two-day pursuit race was divided into six divisions ranging from vintage to contemporary classic. With the slowest boats starting first and the fastest last, it was a spectacular downwind finish especially for the overall winner, 59-foot Bermuda Cutter and Herreshoff-designed Neith built in 1907. Neith was also awarded the W. Starling Burgess trophy for best overall performance in the Vintage division. W. Starling Burgess was a Marblehead native who is credited with creating three America’s Cup winning J-Class yachts, Enterprise, Rainbow, and Ranger between 1930 and 1937 (the latter in partnership with famed yacht designer Olin Stephens).

“Today was a good day and we had fair breeze, and the course was a reach which is great for us,” said Keith Brown. Neith is a long-time participant in the regatta and is owned by Van Brown of Mystic, Connecticut. “We have been coming to this event for a long time and it remains one of our favorites. We had great breeze today and sailing along the Nahant shoreline was spectacular.”

The Corinthian Classic Regatta has evolved over many years and is about celebrating yachting –whether those traditions began a century ago or in the 1970s and 80s. The 13-modern classics division marked the opportunity to see boats like the Ted-Hood-built Little Harbor 37 Sea Robin, the Hinckley 41 Black Magic and the Concordia 41 yawl Grace, the latter of which placed third in the Vintage yacht division.

“This is a unique event for us,” said Principal Race Officer and former commodore of the Corinthian Yacht Club Ken Adam. “I think it is in part for the pageantry of it, and the finish line is always amazing. We know these boats don’t always race for time; they race for the beauty of it. It has also morphed beyond the early 20th century yachts and has long recognized the fiberglass boats from the 1960s, 70s and 80s as modern classics.”

Fortunately, classic yacht racers do understand that their vessels are unique in size, age, and speed, but one of the factors that makes classic racing so interesting is how evenly matched boats can be in a pursuit race format even if there is over 100-year difference in their age and design.

Long time event organizer and Marblehead resident Bruce Dyson, a master shipwright who built an 8-Metre in his backyard, notes that he is always pleased to see how as much as things change, they also stay the same.

“In all my years, the water and the winds have not really changed and yacht racing designers and builders in the early 1900s were making very good boats. Subsequently, Nat Herreshoff and Olin Stephens were influenced by designers of the past just as designers are today,” Dyson said. “If you have a very good hull in 1920 and a very good hull in 1970 helmed by very good sailors, the best boat is whoever wins the race.”

The Pursuit race format is based on expected speeds from different boats but that can differ once out on the racecourse based on unforeseen conditions. For the 12-Metre Valiant, which placed first in the Modern Classic Division, owner and longtime participant Gary Gregory of Marblehead noted, “our size meant we started when many of the smaller boats were nearly at the mark off Boston, but it also meant that the wind was better than we had foreseen, and we were able to make up a lot.”

Any boat designed after 1950 and built before 1980 with rudders separated from the trailing edge of the keel is considered a Modern Classic. The fleet also included nine International One Designs, and Chris and Andrea Morse on board the CW Hood 32 Dream, the very first Hood32 built and considered to be a Contemporary or Spirit of Tradition classic.

Sometimes there is a thoroughbred among the thoroughbreds and that is the case with the presence of the 8-Metre Angelita, who was built in 1930s and was the first American boat to win an Olympic Medal in sailing in 1932. Angelita finished second in her division and third overall in this regatta. Angelita has been owned by Samuel Croll of Greenwich, Connecticut since 1997. Croll often races in Narragansett Bay. “There is a lot of appreciation for the 8-Metre class in Europe as well and it is admired as a true classic everywhere. We also have a great time coming here to Marblehead.”

The pursuit race format also gives sailors and spectators a chance to see how these thoroughbreds look as they finish together.

“There is a tendency in our society to scrap the old, but this goes to show you don’t have to. These boats all sail fast and sail beautifully. To juxtapose a CW Hood32 with an 8-Metre makes us appreciate their speed and beauty. I can’t think of any better way to spend my time than watching these boats sail,” said Corinthian Yacht Club race committee member Ted Agne.

Event organizer and longtime advocate for inclusive, classic yacht racing Timmy Dittrich has devoted much of his time and energy to this event over many years. “No boat comes out of the gate as a classic but many of these boats have earned their place here and have become stewards of their fleets. We want to preserve those great days, those feelings, and those rivalries that began long ago with some of these legendary yachts,” Dittrich said. “At the end of the day, this is a labor of love for all of us and we would like to see this event continue to grow.”

To learn more about the race, go to corinthianclassic.org