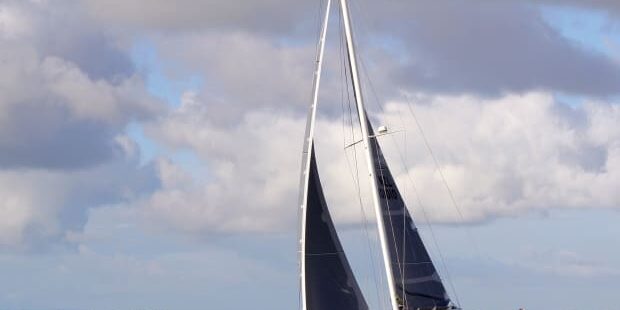 If you’ve watched America’s Cup or grand prix sailboat racing you may have noticed the mindboggling technology that goes into moving a mass of magnificently crafted composite around some buoys or around the globe. These machines are otherworldly. But in case you think those speedsters have nothing in common with boats that are available to mere mortals, think again. Your family SUV probably benefited from advances made for Formula 1 racecars, and today’s performance-cruising boats leverage trickle-down technology from the racing circuit to become sophisticated platforms that are within reach of the average sailor.

Take, for example, the Rapido 60 bluewater cruising trimaran from Vietnam-based Rapido Trimarans (rapidotrimarans.com), which looks like a rocket ship, but was just purchased by Riley and Elayna from Sailing La Vagabonde for their family of adventures, including two kids under the age of three. The innovative technology that went into the design and construction of the boat is what makes it a top choice for cruising. So, what goes into the making of a game changer? We spoke with Erik Berzins, yacht designer and partner at Morrelli & Melvin (M&M: morrellimelvin.com) to find out the three main phases of designing a boat like this.

View the 5 images of this gallery on the original article

Boat design is a process that starts with a design brief. In the case of the Rapido 60, the process started with M&M’s Pete Melvin and Paul Koch of Rapido Trimarans chatting during the runup to the America’s Cup a number of years ago. Their quest was to design a performance-cruising multihull that was light, strong and durable (in other words, of carbon construction), easy to sail and easy to ship (since Rapido builds its boats in Vietnam and needs to deliver them to owners around the world). Concept sketches and a specification document soon followed, which began to shape and define the boat and its purpose.

First and foremost, the boat had to have the characteristics of the best upmarket monohulls (with most of its living space housed in a single, main hull) without dragging around a lead keel. It also had to have good stability and seakindliness, while still being light and airy, with the saloon and cockpit area all on one level like a catamaran. Performance had to be impressive, at the top end, yet a couple had to feel comfortably in control with overall safety being paramount. In addition to all that, the design and build had to be classed to CE Category A (the highest certification level to withstand offshore ocean sailing). To meet these challenges, Melvin and Koch agreed on a trimaran with its speed, efficiency and stability, and strove to create one that was remarkably livable and easily sailed shorthanded, so an owner wouldn’t need 10 rock-star racer friends on board to sail fast, comfortably and safely.

From the initial brief came the more detailed layout sketches, preliminary 3D models and some broad-brush, pass-through structural analysis. Weight, length and beam ratios, as well as rigging loads and center-of-gravities were mapped out. Max load estimates are critical, especially for a trimaran that can fly its central hull at 12-13 degrees of heel. You’re basically picking up the entire boat by the shrouds, so strength is imperative, and these loads need to be distributed throughout the platform efficiently.

During this phase, a rough structure was outlined, with initial laminate schedules in key areas, sailhandling requirements laid out, and the shape and position of the rig, rudder and daggerboard determined. For example, the Rapido 60 was given a T-shaped single rudder to reduce pitching and improve control, along with lines led aft to the helm for easy shorthanded sailing. The boat also has multiple watertight bulkheads in the amas and main hull, along with a technically challenging set of discontinuous main beams, since the door to the forward cabin forms a large opening in the main bulkhead (for easy accessibility) right where the beams would connect. As a result, these beams are now being built with autoclave-cured, pre-preg carbon for a significantly stronger structure than its equivalent in steel or aluminum.

The second phase of the design process concentrates on four main areas, with cutting-edge tools used to shape the details. “This part is about making it real,” says Berzins. “Morrelli & Melvin keeps all analyses in-house for improved collaboration under one roof rather than outsourcing the process to other companies. This leads to better oversight, consistency and cost control.”

1) Finite Element Analysis (FEA): FEA is all about determining the structural details. Hull strength and maximum loads are dialed in. Remember those discontinuous beams? They’ll have different load paths, which must be identified, after which a detailed 3D model will create a stress concentration diagram. “Here we test it for ‘sailing in anger’,” Berzins says. “We basically redline various aspects and see what breaks.”

Structural issues and weaknesses are identified, but solutions aren’t always easy. “Throwing more laminate at problem areas just creates an overbuilt boat,” says Berzins. “And a heavy boat is a slow boat. It’s all about balance and adding additional structure only where it is needed. That’s one of the biggest benefits of composites. The ability to add strength in specific load paths allows us to build up the required strength for a fraction of the weight.”

2) Computational Fluid Dynamics (CFD): CFD is all about flow analysis. This is where geometries and hull shapes are optimized and a close eye is kept on how water (and air) will actually behave as it moves past the hulls and superstructure. Analysis includes everything from canoe body shape, pitching stability, slamming indices, wake generation, hull-form drag, appendage lift and so on. Stability and comfort are fine-tuned and drag is minimized across the range of possible loading conditions.

“Cruising boats are loaded down with all the ‘necessities’ of cruising: appliances, living spaces, tankage and toys, like SUPs. The lighter the platform, the more stuff you can bring as payload, but ultimately weight always equals more drag,” Berzins says. “It’s important to account for this extra displacement and how it influences the behavior of the boat underway.”

3) Fluid Structure Interaction (FSI): FSI is a combination of the two tools listed above. How much will the foils (daggerboard and rudder) deform under load, and how does their performance change when operating in this deformed state? Where is additional strength needed? According to Berzins: “We add additional layers of laminate and different stiffness materials, we vary fiber orientations, and we check how the structures are behaving under load—whether they’re twisting or bending under stress in a favorable manner or not. We can then refine the laminate schedule to optimize this behavior to ensure safe and predictable performance from the foils through a wide range of loading conditions.”

4) Velocity Prediction Program (VPP): Next comes the VPP, which is all about performance analysis and prediction. This is where the boat’s polars are created, predicting boatspeed across a range of true wind speeds and angles. A performance-cruising multihull can now sail faster than the wind. How much faster is a good metric for quantifying the boat on the performance scale.

The VPP is essentially a force-balance calculator, which takes in multiple inputs and solves for the best boatspeed across the entire wind range. Like any analysis, the output is only as good as the quality of the input data—better input data equals better performance accuracy—so M&M works hard to accurately define the input matrices to ensure accurate results. These include working with sailmakers to get accurate sail lift and drag coefficients and using CFD alongside FSI results to build matrices for hull and appendage forces, as well as windage estimates for rigging and other above-water drag elements. M&M uses a simulation software called GOMBOC, which was developed to help with the design of a number of Emirates Team New Zealand’s America’s Cup catamarans.

With virtual-reality goggles and steering wheel control, owners can even “drive” their concept boat before it’s real. The simulation can push the boat to extremes and beyond, change sea states and test the influence of various appendages as they’re raised and lowered on the fly. This allows the user to see how “sailable” the boat is—i.e., if it is forgiving to an inexperienced helmsman or trimmer, or if it requires a high degree of skill and attention to perform well. “For a performance-cruising boat, we want the boat to be easily sailed shorthanded, meaning it does not require constant trimming or helm adjustments, as a lot of our clients ultimately end up using the autopilot to drive,” says Berzins. “When we finally do go sailing, we check the accuracy of the VPP numbers with the simulator output. Typically we’re pleased with the accuracy of the predictions.”

By this stage, actual boat construction is well underway. For critical components that underwent the additional analysis mentioned above, test jigs are built to validate the accuracy of the loads and stresses used in the FEA. Full-size rudders and daggerboards are put in these test fixtures and deformed to match or exceed the previously analyzed loads. Predicted deformation is compared to actual deflection to close the design loop. In the case of the Rapido 60, the first finished boat was strapped to the ground and two cranes used to apply over 10 tons of force to twist and load various parts of the platform to see how it matched M&M’s earlier global loading analysis.

“This is typically a huge investment and a risk,” says Berzins. “But we’d much rather have something break in the yard than out on the ocean. While this might not be done on every part and every boat, it is a good way to test a new concept, validate the design and fabrication techniques, and give the client, builder and designer all some peace-of-mind.”

In the case of the Rapido 60, the result of all this work is a modern marvel offering a combination of cutting-edge bluewater performance and ease-of-use. Under its hood, it has the benefits of all the tools and analysis used by one of the leading multihull design firms in the world.

In contrast to its two smaller siblings, the R50 and R40, whose beams fold to fit the boats into a standard sized slip, the 60 is a little too big for that. However, its amas and beams can be easily attached using a one-time bolt-and-glue process, allowing them to be attached after shipping from the factory to wherever in the world a finished boat may be bound.

The boat is approximately half the weight of a 60ft performance catamaran with an equivalent sailplan and has a high-modulus rotating carbon mast. The trimaran’s wider beam generates more righting moment than a same-size cat, making it safe in even the worst conditions. It can also be easily singlehanded when the other crew needs to, say, keep an eye on the kids. Boatspeeds top out at 25-plus knots with the helmsperson in comfortable control—a performance feature that is seen by its designers as a safety feature as well, since it allows the boat to sail away from an oncoming storm. With all the validated high-tech processes that Morrelli & Melvin put into the Rapido’s design, the boat is a true game changer. Maybe it’s time it changed the game for you, too.