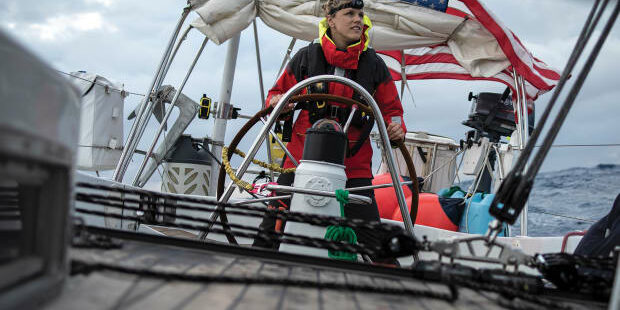 I was going to write this month’s column about propellor selection. Biking my 2-year-old son, Axel, to preschool yesterday, the piece started forming in my head. It was technical. Balance the tradeoffs between engine efficiency at slow speeds offshore versus power for maneuvering around the dock and drag-free efficiency under sail. In my head on the bike, the thesis of the propellor piece was first to figure out exactly what you wanted to optimize for. From there, all of your decisions would effortlessly follow. And then the lightbulb went off.

In the prop example, we are going through this right now with Falken, our new Farr 65 flagship that’s in refit in the U.K. We’ve repowered the boat with an 85-hp Beta Marine diesel engine. Initially, the plan was to reuse the three-blade Max Prop that came with the boat. We’d have it refurbished and repitched for the new engine, then reinstalled. But when Max Prop said the prop had lived its life, had been refurbished once before, and only had about a year or two left, we went back to the drawing board. If we needed a new prop, would we choose a Max Prop again? And if not, what else was out there? Most importantly, how would we choose?

Propellors actually make a great example of how different parameters can come into conflict when trying to make a decision. If all sailboats are inherent compromises, then every component of a sailboat is also a compromise.

But again, that’s not the point. The point is we deliberately chose what to optimize for—efficiency under sail and simplicity of maintenance, in that order—and the decision emerged quite naturally.

You can do this at every stage of a voyage, from initial boat selection and outfitting to decisions made at sea once you’re underway on a coastal or offshore voyage. Defining the mission at every step of the way takes the pressure out of decision-making.

This is particularly important when you’re actually at sea and often sleep-deprived, maybe scared, and probably wet. Is the mission to get to the destination as quickly as possible, weather be damned, as in a race? Well, that’s easy—optimize for sailing the boat as fast as possible directly to your destination. Fall back on that mission anytime a question arises.

Conversely, cruising sailors almost always should optimize for the most comfortable passage. More specifically, optimize the route to keep the wind angles aft of the beam if possible, or at least about 60 degrees apparent.

Speed and comfort often come into conflict because of the emotions involved; if you’re wet, tired, and seasick, your instinct might be to make port as soon as you can, but this goes against the defined mission—to make the trip as comfortable as you can. Fight that instinct and heave-to or crack the sheets. If at the start you’ve defined the mission to make the passage comfortable, rather than fast, then there really is no decision to make; simply fall back on your plan.

Boat shopping? What will your mission be? Full-time liveaboard coastal cruising? Long-distance ocean sailing? Racing? Daysailing a simple and fun-to-sail boat? Every one of those missions is in direct conflict with the other. An optimal ocean-cruising boat is often a lousy platform for having lots of friends and family around for fun, easy weekends, and vice versa. But if you can define your primary mission clearly from the outset, you’ll know which designs are better for you inherently. If all boats are a compromise, you’ll be best off not compromising on the things that are defined by the mission, making the hard decisions easier.

As we researched the propellor options for Falken, it became clear we had to pick one of the scenarios we wanted to optimize for: efficiency under sail, or efficiency under power. The Autoprop was disqualified because it would require a shaft brake on our hydraulic gearbox, which doubled the price and added complications (one more system to maintain).

In the end, we opted to optimize for efficiency under sail, since most of the time that’s precisely what we’re doing offshore. And that’s the way we like it.