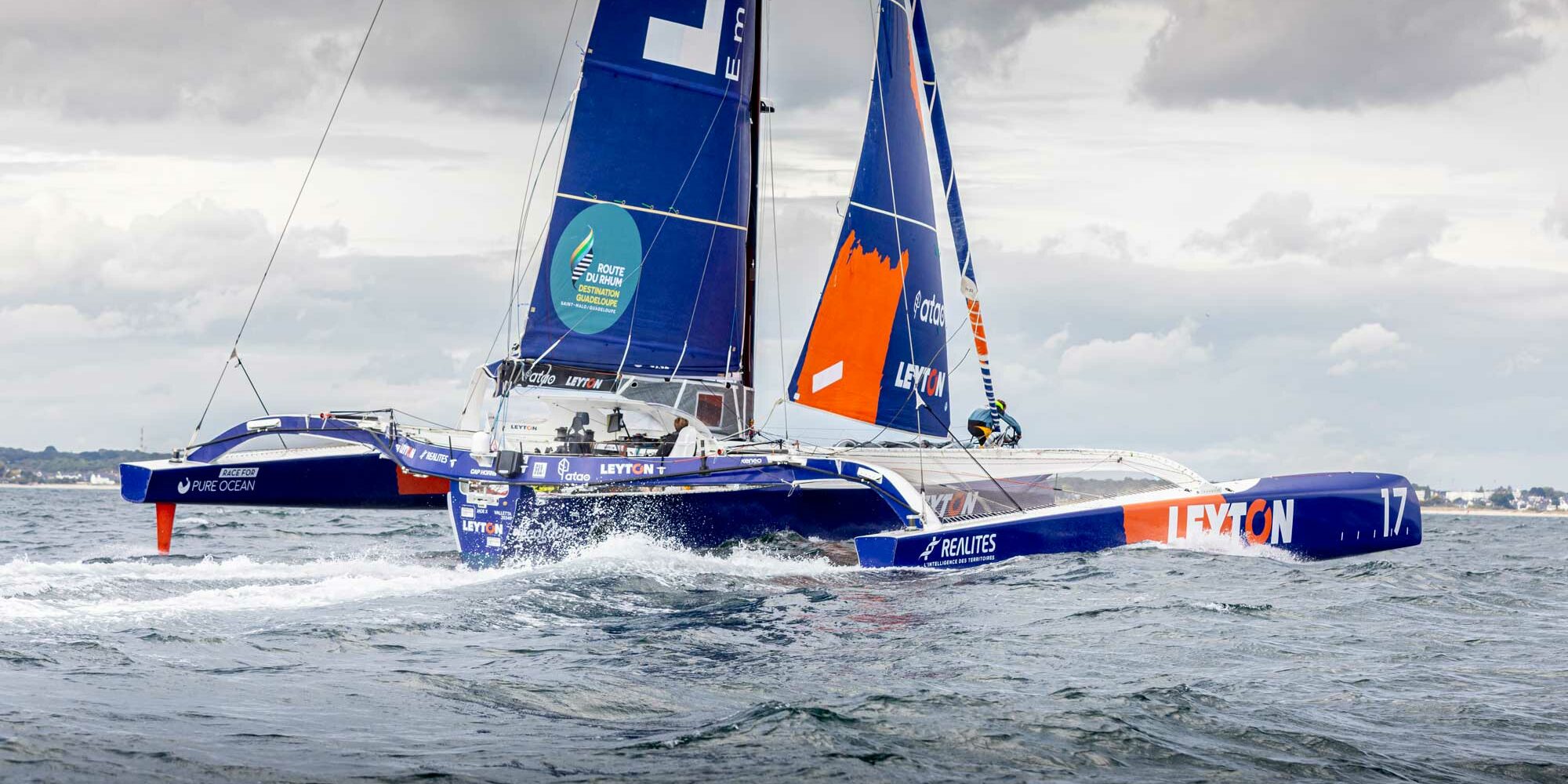 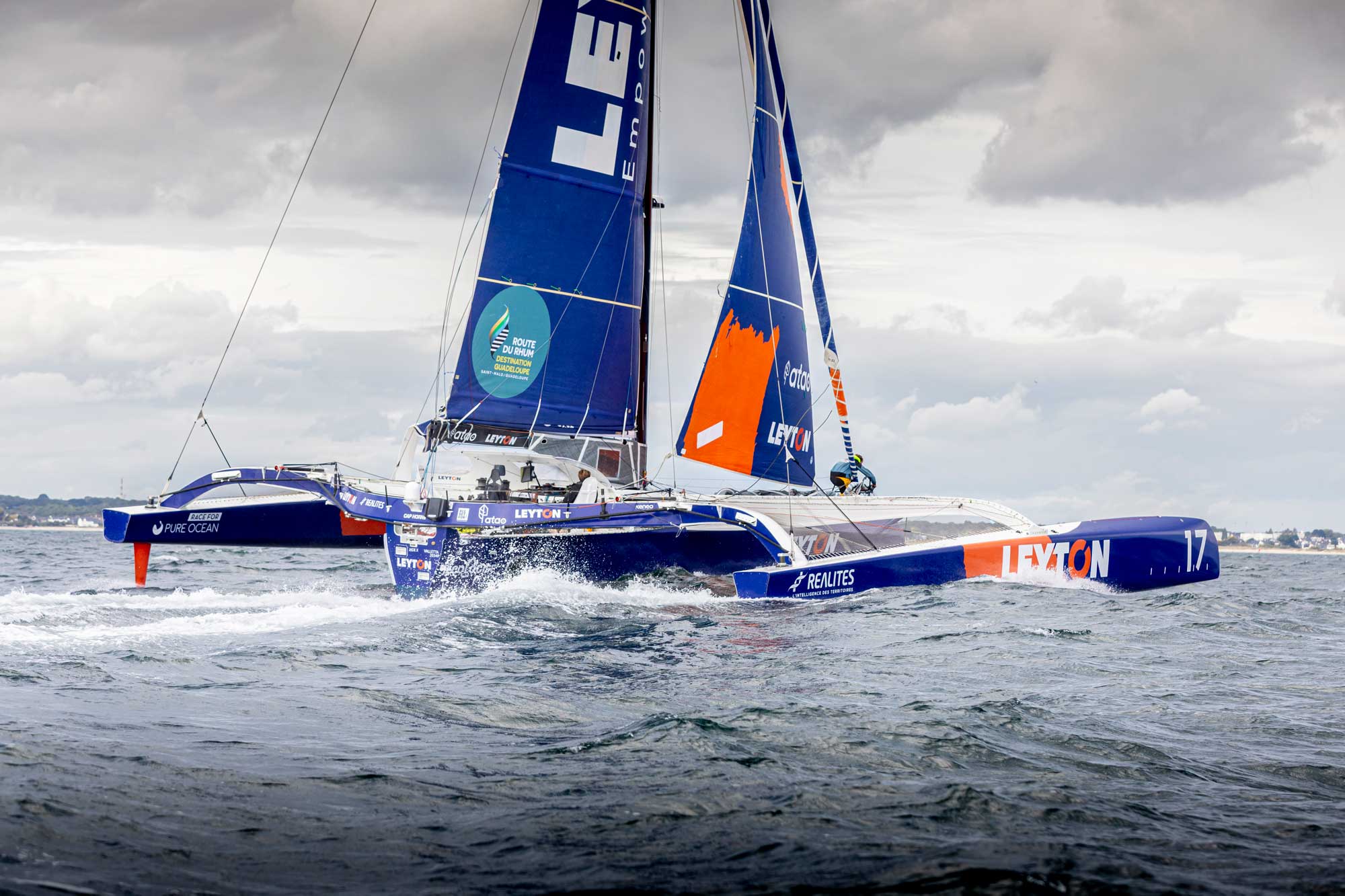 Sam Goodchild’s Ocean Fifty Leyton is among the favorites of this year’s Route Du Rhum. With a favorable forecast, the Fifties and the rest of the fleet should enjoy fast miles once clear of coastal hazards. Polaryse

A record sized armada of 138 solo skippers set to race in six different classes should be blessed with brisk but very manageable wind and sea conditions when the 12th Route du Rhum-Destination Guadeloupe starts Wednesday at 1415hrs off Saint Malo. After waiting for the start rescheduled from Sunday lunchtime due to a big storm which blew through Monday, the reward seems set to be westerly winds of between 13 and 15 knots.

From the start line to the Cape Fréhel gate it will be almost dead upwind. With the massive fleet starting off the same line, maximum concentration and anticipation will be required. After the gate the objective is to get out of the Channel as efficiently and safely as possible, avoiding the no-go areas such as a large wind farm to the southwest of the main westward course. As they progress toward the tip of Brittany the seas will build to 3 to 4.5 meters. By the end of Wednesday evening the fastest Ultims should already be into the Atlantic in a lifting breeze.

Thereafter the strategic choices are fairly open. The first decision is whether to go south or north of the Ushant traffic separation scheme. As usual the option to head west and north will encounter the toughest conditions through a front set to lie between the Azores and Ireland. The conservative option is going south across the Bay of Biscay, increasingly for the fast foiling boats like the newer IMOCAs and the Multi 50s it is the optimum sea state rather than wind strength which will affect the routing.

Briton Will Harris, weather specialist and normally co-skipper of Boris Herrmann’s Malizia Seaexplorer, explains their team’s view of the first few days: “It will be much more reasonable. The start will be quite chaotic and then there are four knots of current (against) at Fréhel, so that will be tricky. It will be full on. Everyone will need to be extra careful here. Then along the Brittany coast if you can start cleanly then there will be an advantage to get away. The first front will be approached on Thursday evening. Around 200 miles offshore it stops and so rather than it pounding on in, it is stopped by a high pressure over Europe. And then front behind catches up. Then there is a decision where you try and push through it or how much do you skirt around it and get flatter sea states. And so, remember that now we only need 15kts of wind and flatter water and we will be going quicker than if you are in 35kts of wind and 3m waves. After that you have to fight through a messy Azores High which is especially messy on the east side. There is a little low developing there too. And that will all change. So, the basic premise is to get around Ushant pointing west, then re-do your weather strategy there, take a breath and decide. And that could be the big decision that decides the whole race, do you push west, go a bit further south, all depending on what your objectives are. There are three or four features to get through between Ushant and the Azores.”

IMOCA favorite Charlie Dalin (APIVIA) agrees that the final strategy will need to be decided on the race course rather than before leaving the dock: “There are huge differences in the weather models. It looks highly likely we’ll get at least thirty knots of wind. We know that the trade winds are well established with decent conditions, but for the moment, I don’t know which way I’ll go to get there. I hope the models will become clearer, as otherwise we’re going to have to adapt to the weather once out there and that means spending more time at the nav station. I prefer it when things are clear early on.” 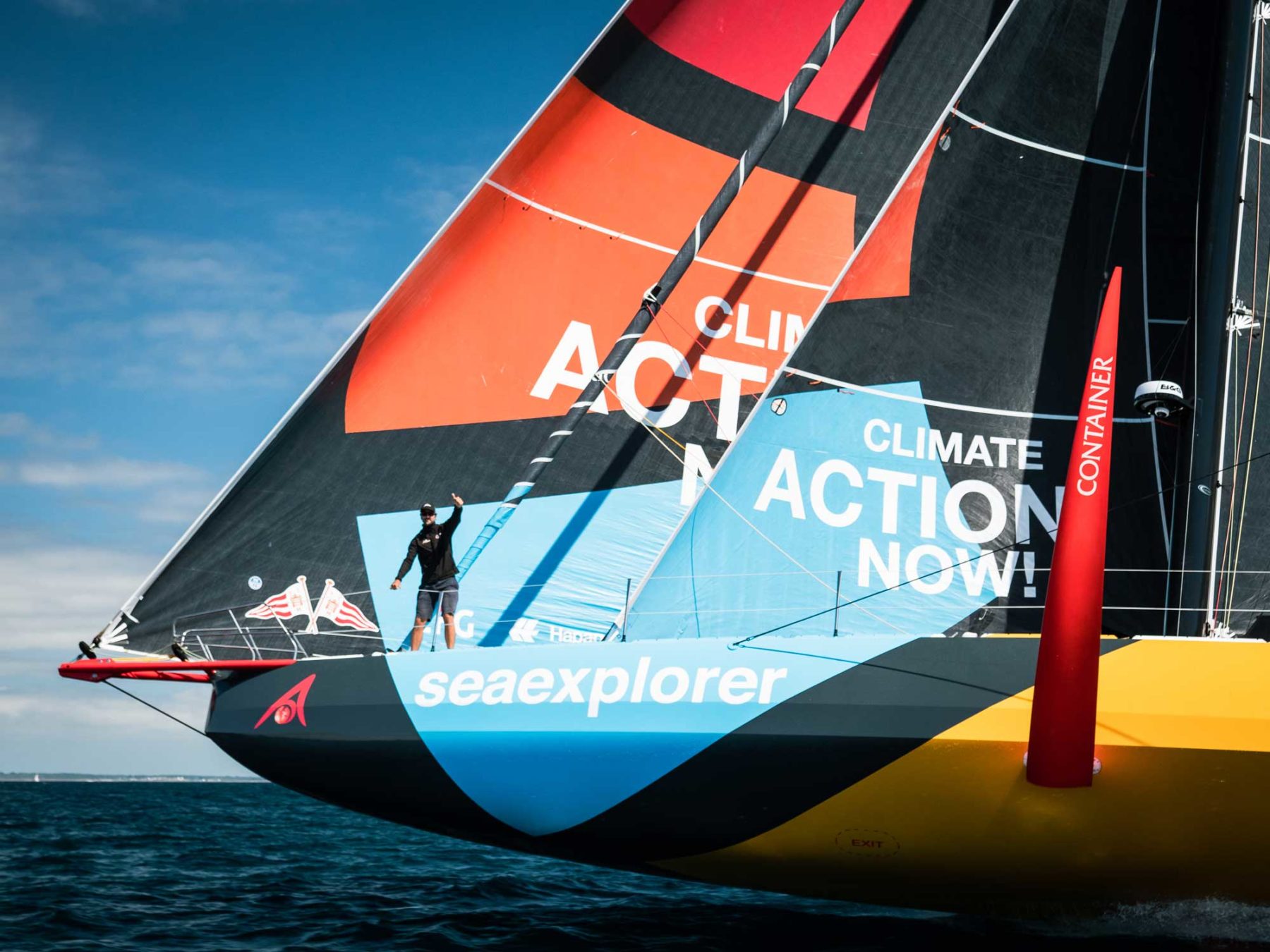 Sam Goodchild, skipper of Leyton, one of the favorites in the Ocean Fifty class concurs, saying: “Going through this front will be a big decider straight off. Our type of boat it is not just like you will go faster in the north, there is a big potential to go faster in the south, it is not just about not being boat breaking. But, otherwise, it still looks like a typical Route du Rhum, we will go upwind there will be big winds and big waves. Just because we avoided the ex-hurricane does not mean it will all be cool and easy. The strategy initially is just about getting through the first bit of bad weather with the boat in one piece, everyone has to decide where you set the limit – how far north do you go, how far south do you go – the same question is there. The full southern route is not open, there is a southerly route which is a little less boat breaking. It is evolving all the time.”

It’s a relatively straightforward sequence for the Ultim 32/23 even though the three-meter swell forecast off Ushant on Wednesday evening and a southwesterly wind will be a point of sail that is not perfect for these giant boats. They should be able to keep up speeds of 25 to 30 knots, allowing them to reach the front by midday on Thursday. Four years ago, some of these trimarans were too fragile to withstand a battering, but the skippers agree that progress had been made. Upwind in the uncomfortable conditions does play to one of the strengths of favorite Maxi Edmond de Rothschild which has developed a fast, relatively comfortable and controllable upwind mode.

Once they have dealt with this front that the Ultim multihulls will be able to move further south and look forward to the trade winds. The corridor to reach the edge of the Azores high is however quite narrow. If all goes well, the first boats should pick up the trade winds by Saturday evening.

There will be two fronts rather than one for the Ocean Fiftys. It would appear that the skippers will try to move further south of the theoretical route once they reach the tip of Brittany around midnight on Wednesday, forcing them to tack through the Bay of Biscay. “It’s not going to be easy to find any opportunities,” said Armel Tripon after this morning’s briefing, “but there are still possibilities. Once past Brittany, there will be a choice to make between two options.”