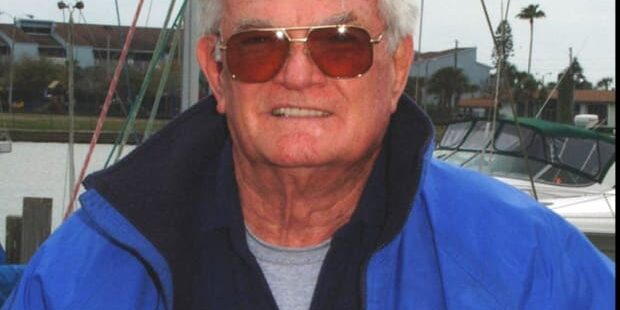 Jan. 11/2023: Now comes news over the past weekend that Charley Morgan, one of the great pioneers of fiberglass boatbuilding and design, left this world on Saturday, bound for whatever comes next. He was 93, and reportedly passed just a few hours after his wife Maurine died.

Sailors of a certain age will remember Morgan only for his most successful boat, the once wildly popular Morgan Out Island 41, one of the very first “charter barges,” or “the fornicatorium,” as he himself once put it. But in fact Morgan first established his reputation on the racing scene. Born in Chicago, he was raised on the west coast of Florida, and the first boat he ever built, Brisote, was a 31-foot plywood yawl with a keel and rudder off a Star, a mainsail off a Thistle, and a mizzen from a Penguin. With his buddy Charlie Hunt, who helped designed and build this unlikely machine, he took second in class in the 1957 St. Petersburg-Havana race.

Inspired by this success, Morgan conceived Paper Tiger, a 40-foot yawl, with a fiberglass hull, on a commission from one Jack Powell. Morgan built the hull and deck, then took these to Clark Mills (designer of the Optimist pram) to have him finish the boat. Mills reportedly remarked: “Well dammit! This is the first time someone’s brought me a coat of paint and asked me to build a boat inside it.”

Paper Tiger went on to take overall honors in the Southern Ocean Racing Circuit (SORC) in both 1961 and ’62.

The rest, as they say, is history. Morgan founded Morgan Yachts in 1962, when he couldn’t find anyone to build his next design, Tiger Cub, a smaller version of Paper Tiger. He had great success and sold the company in 1968, which gave him the scratch to finance and launch his own one-man America’s Cup campaign. He designed, built, built the sails for, and skippered the 12-meter Heritage, in which he competed in the 1970 America’s Cup defender trials. He was eliminated by Bill Ficker on Intrepid, an episode memorialized in this excellent video. Morgan is the skipper with hair:

Morgan left Morgan Yachts in 1972 and went on to found Heritage Yachts, building both trawlers and sailboats. He also did design work for Chris-Craft, Columbia Yachts, Com-Pac, and Hutchins.

According to Dan Spurr’s book, one of Morgan’s most fun jobs was building fiberglass vessels for Disney World:

“There was a time we built the largest fiberglass boats in the world. Morgan Yachts designed and built the principal original watercraft for Disney World, a whole fleet of them, the largest of which is around 120 feet—submarines, the jungle cruise boats, the steam launches. In all, more than a hundred.”

The total number of sailboats that Charley Morgan designed is quite impressive. Fifty-three in all. Check here for the complete list.

May God go with him.