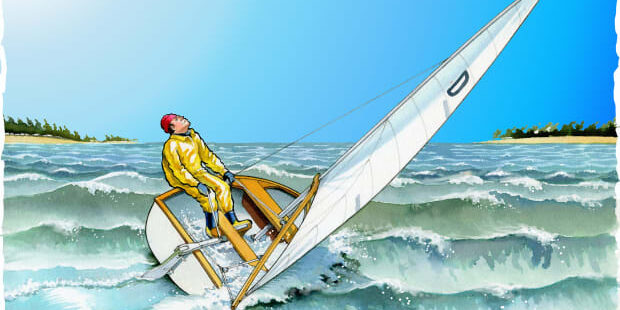 While many sailors are said to be superstitious, I never had any qualms about casting off lines on a Friday or hanging a large stalk of Jamaican bananas from the mizzen. Nor did I see any cause for concern heading out on “The Ides of March” for a quick daysail aboard my Dyer dinghy.

After a dozen years of sailing in the tropics, I had just finished my first winter up north again on Long Island, New York, in what felt like forever. Except for a few hours in an antique iceboat on Long Island’s frozen eastern Great South Bay, I hadn’t been sailing in months. Then came a sunny, sparkling clear day with a brisk northwesterly breeze, following a frontal passage in the middle of March. I decided a short sail in our 9ft Dyer dinghy would be just what I needed.

I was clad in full foulweather gear and sea boots, over many layers of warm clothes, topped with a wool ski hat, as I launched the dinghy in a nearby canal. The skim ice broke away in sheets as I carefully positioned myself on a couple of boat cushions and the dink settled in the water. The ice crunched away from the fiberglass bow like a mini-icebreaker as the small mainsail filled, and I started making my way down the 500-yard-long channel. Ice fringed the wooden bulkheads and pilings to either side as I approached the mouth of the canal. As I was in the lee of the land, I thought I’d head out a bit and see how things looked out on Great South Bay proper. However, the bay proved to be rougher than expected out from behind the protection of the houses and tall trees along the short, and I immediately decided it would be best to head back in.

Unfortunately, as those of you who have sailed a Dyer dinghy know, the mainsail does not reef, and the daggerboard is tiny and does not get much bite when trying to go to weather. The boats are also tender, and the rudder small and not very responsive. For all these reasons, when I attempted to get my little vessel to head back in toward the channel, it proved impossible coming about, and I soon found myself being pushed even further offshore.

As I tried my best to sheet in and hike out to keep the boat flat in preparation for yet another try at tacking, an especially strong gust combined with an equally sharp wave suddenly sent the leeward rail sliding underwater. Instinctively, I scrambled up the windward side, feeling my weight pushing the boat under. After capsizing, the boat slowly turned turtle. I could only watch as the boat cushions quickly blew away to leeward with the wind and waves.

The mostly-submerged hull barely supported my weight as I crawled up on top of it. Freezing cold waves washed over me again and again as I weighed my options. Though it had been ingrained in me since my youth to always stay with the boat and await rescue, I didn’t see another vessel anywhere. I had no way of signaling for help. No one knew to look for me. The water temperature was only slightly above freezing, the depth around 7ft. The nearest strip of beach was maybe a half-mile away. I made the decision to abandon ship and do my best to try and make it there.

As I slid off the slippery hull, the inverted dinghy immediately drifted away to leeward. I was committed whether I liked it or not. Swimming was nearly impossible, dressed as I was with all my heavy gear on. However, a sort of air pocket up had developed around my shoulders, which not only provided a little extra buoyancy, but helped at least of part of me stay warm and dry.

The waves were about 2ft high, and in the troughs I could just touch bottom, which made it possible to both bounce my way along and surf with the waves toward shore. I thought about kicking off my sea boots, but they seemed to help, besides which, these wool-lined felt-padded beauties retain heat even when wet.

Boots or not, it didn’t take long for my legs to start going numb. I knew I had to keep bouncing if I was going to make it. As the water got shallower and I worked my way through chest-deep water, my gear became heavier as I lost the advantage of the air trapped pockets.

Seeing a man walking his dog on shore, I called out to him and waved. When he finally saw me he did a double take. Coming upon a complete stranger struggling to make his way out of the icy waters of Great South Bay was clearly the last thing he’d expected. He waved back. Great, I thought, at least if I drop dead where I am, I’ll have a chance of being hauled out. After sailing thousands of miles, weathering hurricanes and numerous full gales at sea, I told myself I wasn’t about to join Davy Jones in 4ft of water a half mile from home!

As I emerged from the water, the weight of my waterlogged clothes made walking harder than ever. I knew I had to keep moving, had to keep placing one foot ahead of the other as I approached the increasingly incredulous dog-walker. After I explained how I got there, he hurried me into his truck and turned the heat on full as gallons of seawater streamed out of my gear onto the seat and the floor.

Back home, I stripped off my sodden gear and took a hot shower, happy to be alive. After that I called up my dad, a commercial fisherman, and the two of us were soon out in one of his boats looking for the Dyer, only to be told the local Marine Patrol had picked it up near their headquarters, a good four miles from where I’d gone in the water. The more I thought about it, the more I was convinced that had I stayed with the boat, I would have succumbed to hypothermia long before I was ever rescued.

What I did wrong

• Did I tell anyone that I was going sailing? No, they would have said it’s freezing and blowing half a gale. You’re nuts!

• What about a life jacket? Well, I had a couple of those square cushions—they float. Hey, I’ve sailed through hurricanes offshore. I’m right in my backyard. What could go wrong?

• A waterproof VHF? By the time a radio call could been responded to the cold water would have taken its toll

• Frostbite sailing is done in protected waters, not out in rough conditions, alone and in a dinghy!