Experience: Up the Mast 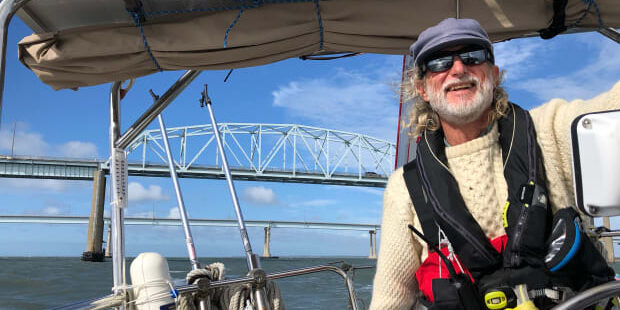 I gazed aft over Hazel James’ port quarter and patted her well-travelled 31ft hull. “It’s time to sail, girl. We’ve got a long way to go,” I said.

As the Virgin Islands sank below the horizon, my thoughts were filled with Caribbean memories, a curious and sundry collage of trade-wind sailing, cruising friends and shimmering turquoise water the color of Hazel’s hull. After a poignant moment or two, though, I turned my attention forward again, from the past to the future—not some dreamy and distant future, but the imminent challenge of the 1,200-nautical-mile single-handed passage that lay ahead.

By happenstance, the voyage I was on straddled not one but two epochs. I had embarked from South Florida in the “before time,” prior to the pandemic, with the goal of reaching the Virgin Islands via The Bahamas. Not surprisingly the upwind passage against the prevailing currents from The Bahamas to the Virgins had lived up to its expectations. However, as recompense for all my southward efforts, I now hoped to be rewarded with an “easy” downwind island-hop northward, from the Virgins to Puerto Rico, the Dominican Republic, the Turks and Caicos, and then on through the Bahamas to Florida, with a sprinkling of single overnight sails. From a theatergoer’s perspective, it was a simple and understandable morality play—good things happen to good people who invest the time and effort. Then, of course, there was the reason I had embarked on this voyage in the first place—to help process the grief from my sister and my wife’s recent but unrelated deaths—by far, the two most awful things that have ever happened to me. I deserved an easy passage home, or so I thought. Unfortunately, the Coronavirus had other plans for me, and with international borders sealed throughout the region, my passage home was now going to have to be nonstop.

In the cockpit I considered my situation and told myself, Oh, well, even if I can’t island-hop, at least I should have hundreds of miles of fair winds and following seas under Hazel’s cruising spinnaker. And with that, I clipped-in to my jackline and tether system and made my way to the foredeck to set the chute.

Like a snake, it lay ready to emerge from a winter’s hibernation, sheathed in its sock and coiled in its bag. As I rigged the halyard and sheets I was surprised at how my hands fumbled, that and the butterflies in my stomach. I was rusty, after all, having been locked down for a solid month in the British Virgin Islands due to the pandemic. Next thing I knew I was alone on Hazel’s foredeck looking up at the spinnaker, hoisted but still in its sock with the wind gusting to 20 knots. Should I wait until the wind dies down? I wondered. But in the end, I decided to “damn the torpedoes” and hauled away on the sock’s uphaul, only to be greeted moments later by the sight of an overgrown, violently flogging hourglass—the spinnaker now bound by a sickening twist in its midsection. I cursed myself for not listening to my instincts but quickly returned to the problem at hand. Unfortunately, as I tried to corral what was now a bucking bronco of a sail, I also accidentally loosened my grip on the halyard for a split second.

Any sailor worth his or her salt knows exactly what came next…in an instant the entire tail of halyard disappeared upward. It felt like an eternity as I watched the coil of rope that had just left my hand race up the 44ft length of Hazel’s mast and then plop back down at my feet in a tangled mess. Of course, the only way to fix the problem would be to climb the mast. But while I’d been up the mast many times at the dock, there was no way I was going up there all by myself mid-passage. I was just going to have to get by without it for the remainder of the passage—it was that simple.

Then came the following morning, when the wind died as we were sailing slowly wing-on-wing. I could, of course, have fired up the diesel, but I had it in my mind that I wanted to make the entire passage under sail. Hours later Hazel’s Dacron sails were still flapping uselessly in the nearly still air. If I’d had the spinnaker, I kept thinking, we wouldn’t be moving fast, but at least we’d be moving. I looked out over the endless calm of the ocean and then looked up Hazel’s mast again. I began to think, “Why not climb the mast?”

The good news was that Hazel’s mast is outfitted with climbing steps. However, I also made a point of strapping myself into the boat’s bosun’s chair as backup. As I tied the coiled spinnaker halyard to my belt, I also gave it a close look. It hadn’t been new at the start of the voyage and the tropical sun had taken a further toll. Before going aloft I considered swapping it out with the spare halyard I also had on board, but decided against it. It seemed unfair to my trusty friend, the halyard, who had already taken me so far. I spoke aloud and tenderly to the faded and slightly frayed line, “Get us through this passage, buddy, and you will be retired to a place of honor.”

After that I headed up the mast—10ft, 15ft, 20ft, straight up. With every step, I would slide the cam fitting at the top of the bosun’s chair up the mainsail halyard so that if I fell, it would come tight quickly and—in theory—stop my fall. As expected, with each foot of progress upward, the rocking of the boat became that much more amplified.

While the climb wasn’t so hard, the implications of a possible fall—with absolutely no one to lend me a hand—gave one pause for thought. I don’t know if it took me three, five or 10 minutes to make it the entire 44ft—all I know is it felt like an eternity. Up at the masthead, I untied the halyard from my belt—making sure I was keeping a tight grip on it with both hands!—pushed the tail through the block and then re-tied it to my belt in preparation for the trip down. The hardest part of the job was now done.

When my feet gripped the deck again, I was euphoric. I pumped my fists in the air and shouted to the heavens. I had done it! Well I’m not going to need this again for the rest of the passage! I thought to myself as I stowed my bosun’s chair.

An hour later the wind began to pick up again. I hoisted the spinnaker, this time flawlessly, and we were off, making our way west-northwest toward home.

A couple of days later, Hazel was still bubbling along under spinnaker. The 10–15 knot east-northeast trades continued to make for the perfect broad-reach home. I was belowdecks when I heard a dull “pop!” and the entire boat shuddered. Hazel straightened up in the water and began to slow down. In a flash, I knew exactly what had just happened, what was going to happen next, and—more importantly—what very well might happen after that.

Sure enough, looking out the portlight I saw my now deflated spinnaker fluttering lifelessly into the water. The old spinnaker halyard, the one to which I had promised a retirement with full honors, couldn’t make it after all. It had tried its best, but was a little too frayed, a little too tired and a little too degraded by the sun. Throwing on my safety harness, I rushed out on deck and instinctively clipped on to the port-side tether amidships. It was imperative I get the spinnaker out of the water as quickly as possible.

Several minutes later, I had the soaking-wet sail on deck, safe and clear of the keel and rudder. Examining the halyard—now in two pieces—I could see where it had parted a couple of feet from the head of the spinnaker where it passed through the block at the top of the mast.

When I had lost the halyard up the mast on Day 1, my first thought had been, There’s no way I’m going up there by myself. This time, though, was different. I was confident I could climb Hazel’s mast at sea. I’d done it before, and I could do it again.

Fortunately, the halyard had broken just as the wind was dying again, which gave me an opportunity to effect a repair right away, and after hoisting Hazel’s staysail to keep her moving and act as a stabilizer, I went belowdecks to rummag through the rope locker in search of my spare halyard and to dig out my bosun’s chair—chuckling at the memory of what I had thought to myself when I put it away.

Before I started up the mast, I took a minute or so to double-check my preparations. As I was doing so I also reminded myself not let my confidence breed complacency. The inherent danger of the climb hadn’t diminished—I still needed to take all the same precautions and ascend and descend as deliberately as I had the first time around.

The climb up the mast, the rigging of the new halyard and the descent, were uneventful, and I soon had the chute flying again. A few days after, 1,200 miles and not one but two trips up the rig later, the coast of South Florida hove into view. If I had learned anything, it was not only to be especially vigilant when your sailing technique is rusty, but be sure and replace an older line before it has a chance to break. I was also reminded that, while offshore sailing requires a thoughtful balance of discretion and valor, it’s both important to never let yourself become overly confident on passage, and also to occasionally push yourself as well.

Ed Note: This article was excerpted from Dan Coate’s upcoming book Heeling is Healing, which recounts the love and loss he experienced following the deaths of his sister from cancer and wife from mental illness and addiction. For the latest on Dan’s sailing adventures visit hjsailing.blog