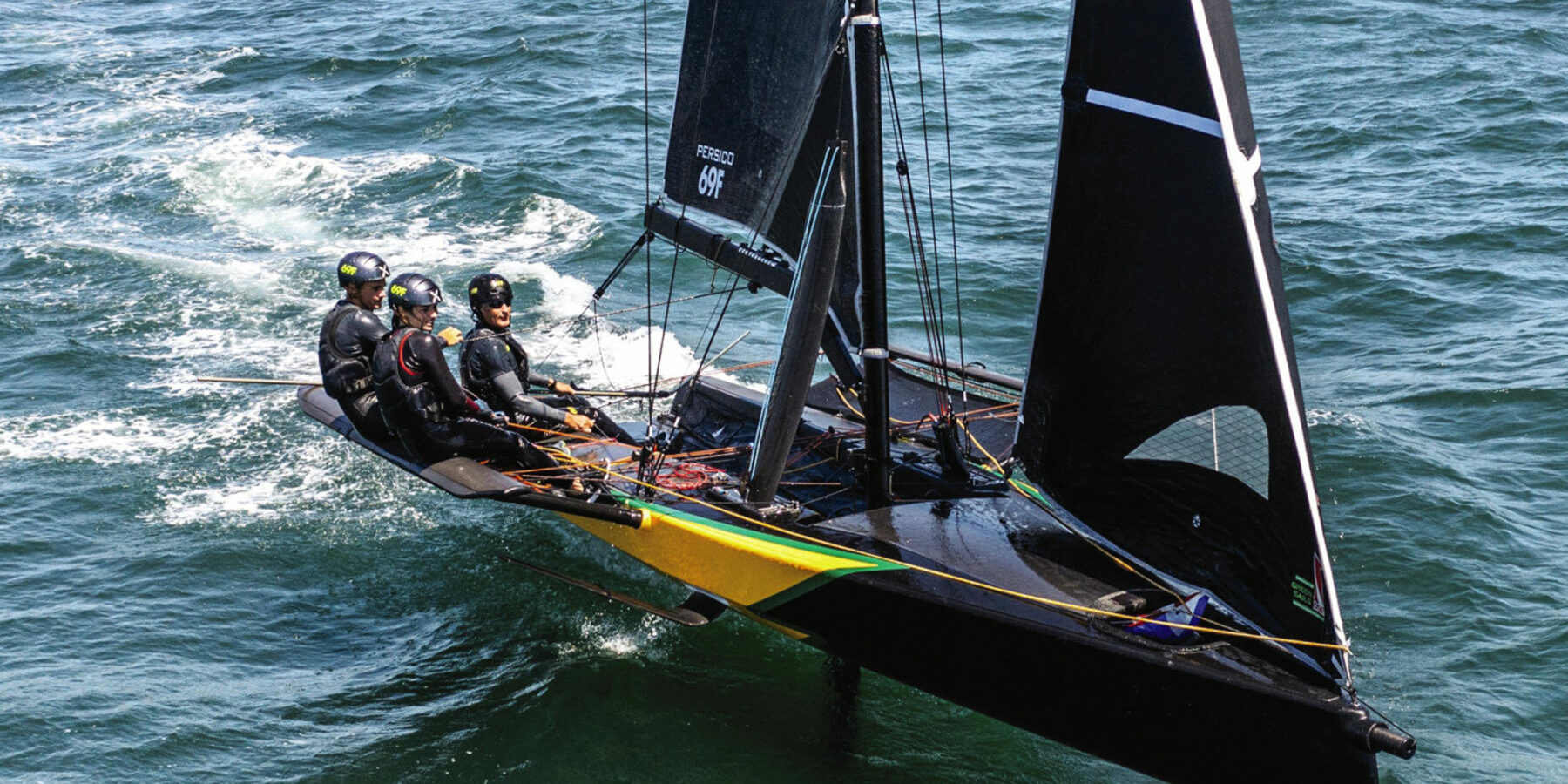 Before the Persico 69F Youth Gold Cup in Newport, organizers provided the foiling experience to guests to prove how simple the boat is to sail. Yacht broker Glenn Walters (at the helm) enjoys his flight. Kevin Rio/69F media

Back in the day, when I ­captained my college football team (cue up Springsteen’s “Glory Days”), I always felt a little nervous during the ritual of pulling on the pads, when the adrenaline and butterflies started to simultaneously stir. Last July, I’m having a deja-vu moment of that particularly unpleasant sensation as I’m handed a helmet, wetsuit, rash guard and life jacket moments before heading out for my first-ever attempt at helming a foiling craft, the Persico 69F. The name is derived from the boat’s 6.9-meter length (which translates to 22 feet, 7 inches).

The fledgling one-design class’s welcoming motto is “foiling for everyone,” a notion I am definitely about to put to the test.

After a pair of previous winter events in Miami for a half-dozen international “youth teams” (25 and younger) and an appearance at South Carolina’s Charleston Race Week, the 69F roadshow has rolled into Newport, Rhode Island, as part of the New York Yacht Club’s Race Week. This is the fourth stop on the American 69F opening season’s stateside circuit. Still ahead is a mixed series with the NYYC; an event in Halifax, Nova Scotia; and the grand finale in Pensacola, Florida, the 69F Cup presented by American Magic. That makes sense because the 69F is purportedly the only other crewed foiling monohull outside of the America’s Cup.

The 69F ringleader in the United States is Miami-based Alex Sastre, a sailing-crazed yacht broker and promoter (a separate 69F European circuit is under different management). Sastre’s 69F mantra is simple: “We are training the next generation of sailors.” But he’s also organizing foiling academies for adults outside of the youth initiative, presumably for numbskulls like me.

One of Sastre’s right-hand guys, a very patient young man from Italy named Pietro Luca who has drawn the unlucky straw of taking me out, gave me a 69F once-over: the pre-preg carbon construction (the boat is built in Italy by Persico Marine), the square-topped mainsail, the V-shaped lifting foils, the T-shaped rudder, the lifting fin and so on, and finally, the handhold for gripping while steering. “Very important,” he says. It’s pretty much the only thing I can concentrate on.

Assuming the helm, with the sails still down and no warning, Sastre tows us out to Narragansett Bay on a big RIB doing Crazy Ivan at about 25 knots, which of course gets us up and foiling immediately, and is easily one of the most terrifying and unexpected moments of my life. “Just follow the outboard!” Luca shouts helpfully.

And then the sails go up. I start to slide up onto the rack, at which time I sky the 10-foot-long tiller extension—which careens us off on a broad reach and into a capsize. Approximately 20 seconds into my initial fling at foiling, we are swimming. Sheesh, how embarrassing. Given the circumstances, Luca is much gentler and more understanding than I would’ve been. Grazie, Pietro.

With a 12-knot southwesterly sea breeze filling in, we shake ourselves off, get everything and everyone back on their feet, sheet it all home and, holy smokes… “Here we go,” Luca says. “You’re up. You’re flying!”

Every sport, at every level, needs a face, someone recognizable to make it personal and relatable. The next day, spearing around the 69F racecourse riding shotgun with Sastre on the RIB, my connection to the real foilers who actually know what they are doing is personified by a diminutive Hawaiian sailor named CJ Perez. At 5-foot-4, Perez is slight in stature but casts a huge shadow over her fellow competitors. At one point, we grab a young Swedish sailor to transfer from one boat to another, and we ask him who in the fleet he is looking out for. “That would pretty much be CJ,” he says.

Pro foiler CJ Perez was a force to be reckoned with in the fleet at the 69F Youth Gold Cup event in Newport, but the practiced Swiss squad prevailed. Herb McCormick

The New York YC race committee has commandeered the southern half of the bay for its race circles, so the six-boat 69F fleet is towed (with dispatch) to race just north of the Newport Bridge. It takes a while for the sea breeze to fill, but once it does we are joined by more foilers—a flurry of Moths and a trio of Nacra 17s—all zipping around with the 69F skiffs. Point proven for Sastre. “This is what I said! This is the newest generation of sailors!” he beams.

There are six races ­scheduled for the day, with the first three laid out on a triangle course as the first wisps of the new southerly darken the waters. Before long, there is a solid breeze. Even a dunce like me understands that with foiling boats, the longer you’re on the foils, the better your odds to, ahem, foil the competition. And the dude from Sweden is correct: On this day, nobody is more dialed in than CJ Perez.

It’s no wonder. At 18, with three years of competitive sailing under her belt, she’s nothing less than a prodigy, a two-time world champion in the O’pen Bic class; the 2021 US national champ in the Waszp foiler; and the first American female to win a race on the SailGP circuit, which she did in Cadiz, Spain, last year aboard Team USA.

On my unofficial scorecard (these are preliminary training races, with the real ones scheduled for later in the week), Perez takes a close second in the first race, then absolutely crushes everyone in the next two. Nobody can match her skills getting airborne and ­staying there.

The race committee relocates the circle and sets up a quadrilateral-shaped course for the final trio of matches, which unfortunately concur with the dying of the breeze. That means the 69Fs plod around the course in mainly displacement mode, considerably leveling the playing field. Once grounded, Perez finishes those three contests in middling fashion.

Afterward, I catch up with her on the beach, where she is derigging the boat, and ask how she got involved with the 69F.

“I saw it on Instagram. I thought it was super cool,” she says, echoing Sastre’s remarks that the class has a huge presence on social media and uses it for both promotion and recruitment. Kids these days, right?

She’s pretty happy with her performance in the first three races, not so much in the final three. But she shrugs it off, mentioning that she is missing her regular flight controller, and her two crewmates weighed in at about 40 kilos apiece. Her competitors, some of which have three crew aboard, have a distinct weight advantage in displacement conditions.

“It’s so hard on foiling boats when you don’t foil,” she says. “Just super frustrating. When you have more flying time than everyone else, you’ll be in front.”

She makes it sound easy.

That said, Perez makes no secret about her ambitions. “I’m a foiler,” she says, making it clear that the concept of being a mere sailor wasn’t a major priority. “And I’m here because I want to be part of a team and learn to work with a team. In the future, I want to race in SailGP and the America’s Cup, which is all about teamwork. This is a stepping stone.”

Then she’s back to work. And I am left with the distinct impression we’ll all be hearing a lot more about Perez down the line.

We are trucking. At least, in my world. I catch 17.4 on a quick glance at the speedo before my attention is drawn constantly elsewhere. (Sadly, I later learn the top speed recorded in a 69F is 34 knots, twice what I thought was epic.)

But enough about the future; back to my own first moments of flight. I’ll admit a trained chimp could’ve handled my job because Luca and a young woman from Argentina handle all the necessary flight controls. The one thing I have going for me is that I’ve tacked out of Narragansett Bay on a summer southwesterly a million times, so once we get the whole show up and running, I can pick out a landmark near all the old familiar Narragansett Bay shoreside attractions (Castle Hill, Beavertail) and aim directly for it. Still, things seem to be happening quickly. Luca’s instructions, after chiding me not to oversteer (more swimming was not on his agenda), are along the lines of what you might hear in a gym from a personal trainer: “Up! Down! Up! Down!”

But we are trucking. At least, in my world. I catch 17.4 on a quick glance at the speedo before my attention is drawn constantly elsewhere. (Sadly, I later learn the top speed recorded in a 69F is 34 knots, twice what I thought was epic.) At the mouth of the bay, off Castle Hill, the incoming breeze and outgoing current kick up some pretty good seas, and I catch more than one complete wall of water to the kisser. Good, wet times.

I will confess to being a bit chagrined when I later saw the photos of me steering from inside the boat, with a death grip on the handhold because I was terrified of losing control of the tiller if I again attempted to scoot out on the rack. But still, like mountain climbers who summit Everest and take a snapshot at the top, it’s proof of foiling.

Near Beavertail, a local ­hotshot sailor and friend of mine, Glenn Walters, swaps driving positions with me, and I’ll admit that the conditions are considerably more gnarly for him. But when they capsize soon after, I am somewhat relieved. Once ashore, I thank Walters for making me feel better, and he snaps, “I wasn’t driving then.”

As it happens, I run into the 69er squad at a downtown Newport joint called Pour Judgement later that night. Yes, I’ve been celebrating my mastery of foiling. And here I’d like to remind everyone that even small victories are victories. As in, with sheepish smiles all around, Sastre says to me, “I asked them which one of you was the best driver, you or Glenn. And they say you are the funniest…”

Always enjoy those tiny wins, my friends. So, foiling for everyone, eh? If nothing else, regarding that motto, I consider myself a living example.