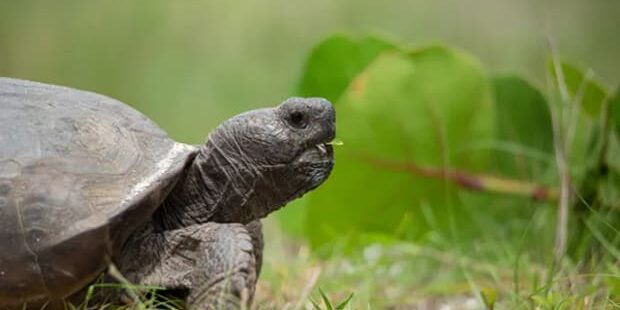 Just six weeks ago Hurricane Ian came through Southwest Florida, turning communities and wildlife upside down. According to CNN, Ian displaced thousands of people and caused the deaths of at least 130 people.

Sanibel Island’s landscape is now brown with trees fallen over or drowned in ocean water. The destruction has caused enormous challenges for animals trying to adapt to the ecosystem changes.

The gopher tortoise, burrowing owl and American alligator are all keystone species. They maintain the balance of Southwest Florida’s ecosystems, but since Ian, these animals have barely been seen. Now, wildlife experts have begun to observe how animal behavior is defining the future of Florida’s native wildlife.

Water imbalances caused by Ian are responsible for most of the issues that these keystone species face. Floodwaters have brought salt water into major freshwater sources. Chris Lechowicz, a herpetologist and director of wildlife and habitat management at the Sanibel-Captiva Conservation Foundation, found that the salinity levels in the Sanibel River had increased from zero parts per thousand (ppt) of salt to 24 ppt. The classification for salt water is 35 ppt. “The freshwater system was almost seawater,” Lechowicz said. “That’s going to change a lot of the diversity in that area.”

These high salinity levels are harmful to species like the American alligator and gopher tortoise, as well as the remaining native tree species, which are harmed by the salty soil.

The burrowing owls have lost their homes. They burrow primarily in yards or empty lots, and debris from the hurricane has covered their holes.

Homes, cars, and boats have ended up in conservation areas. Pascha Donaldson, former leader of Cape Coral Friends of Wildlife has made it her mission to help clean up the debris for the owls. During the storm, a team led by Breanna Frankel from CROW Clinic helped birds of prey by keeping them safe in Frankel’s garage.

Since the storm, American alligators seem to have disappeared. “Alligators are able to tolerate salt water for short periods of time,” Lechowicz said. “But eventually, they’ll need fresh water. I would love to know how alligators did.”

The wildlife is slowly starting to creep back out. “So many habitats are slowly going into shock,” Frankel said. “Whether our ecosystem can overcome that” remains to be seen.

A version of this story originally appeared in Soundings Online