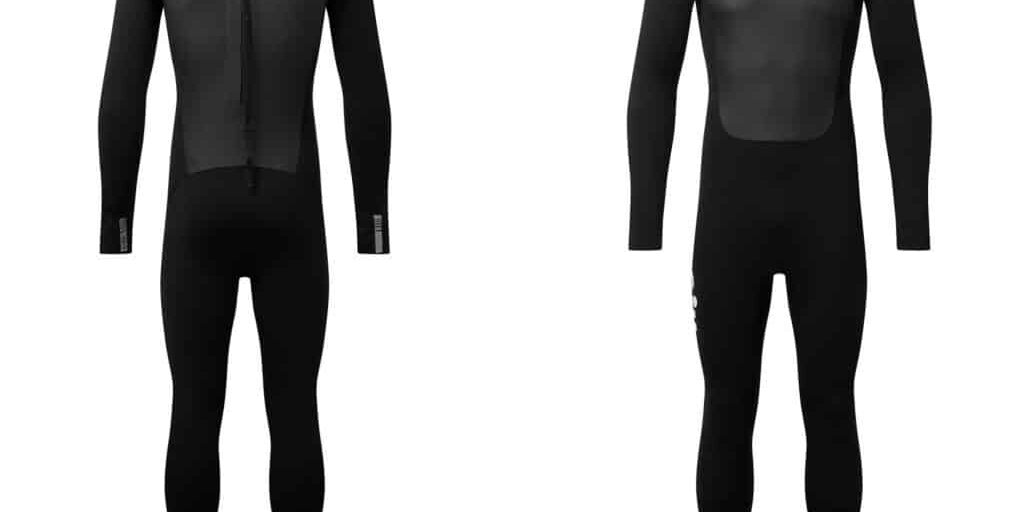 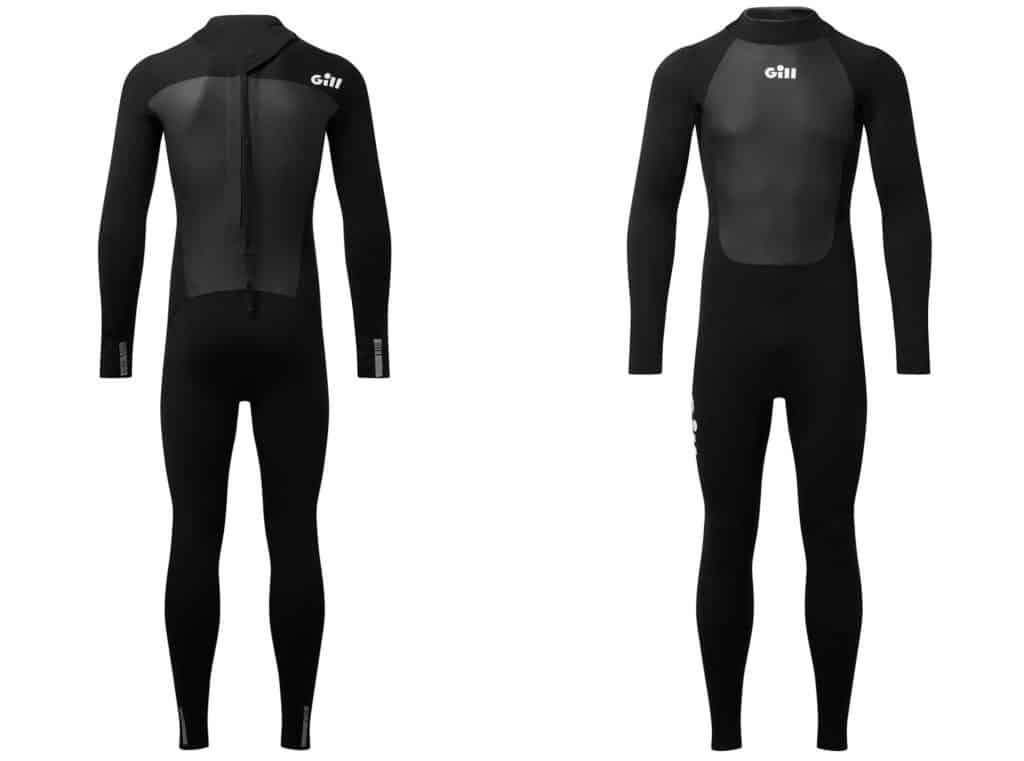 Gill’s Pursuit wetsuit puts thicker neoprene where it counts for warmth and thinner panels on the arms and legs for flexibility. Small but important features include a heat-retaining liner and smooth non-abrasive collar. Courtesy Gill

When it’s really cold and wet, we have two options—and we’re not talking about going sailing or staying home. Well, of course we’re going…that’s what our gear is for. For dinghy sailing, our choice is either wetsuit or drysuit. For small keelboats—and even big boats—it’s pretty much all drysuits, unless you’re going with traditional foul-weather gear. While wetsuit development has evolved around materials and linings, there’s a lot happening with drysuits these days. Gill’s new Pursuit wetsuit and Verso drysuit are two good cases in point.

First, the wetsuit. The Pursuit is a variation of what Gill has offered in the past, with a couple of twists. It’s a traditional, full-body wetsuit, with 4mm of neoprene in the torso area and 3mm in the arms and legs. With that, you get great core warmth and about as much flexibility as possible with this level of wetsuit. The chest and back areas include a thermal mesh lining for even more warmth—and it’s soft to the touch. We especially liked the feel of the soft “Glideskin” collar, something you’ll appreciate if you spend more than a few hours on the water. There’s a vertical back zipper with a long pull cord to make this a do-it-yourself unit. Gill wisely put reinforcement on the knees, but there is none on the seat. Not great for sitting on decks with a lot of non-skid, but if you’re using a wetsuit for sailing, chances are you’re wearing sailing shorts over it anyway to make it easier to slide in and out of hiking positions. Other than that, the only feature not granted on our wish list is a fly. Enough said there. In addition to men’s sizes, the Pursuit is available in women’s and junior sizes. $195 for women’s and men’s; $130 for junior’s suit.

The Verso drysuit takes Gill’s drysuit line in a more versatile direction than their traditional models, which are still available. At first glance, the Verso looks like a drysuit with a spray top over it, which in a way it is, although the “top” is an integral and permanent part of the suit. What’s especially cool is how the “spray top” part holds the suit against your torso with Velcro tabs on each side, eliminating the need for internal suspenders, which are prone to slide off your shoulders if not set correctly. Coupled with the rear-entry zipper, this suit minimizes the bulkiness associated with traditional front-zip units. Wrists also have Velcro closures, which also cut down on bulkiness at the wrist. Then, there’s the hood. The first time we tried this, we thought, “Man, this would be perfect for doing foredeck in gnarly conditions. Or hanging out on the weather rail on a long upwind slog. Or standing at the helm when water is coming over the bow. Or . . .” You get the idea—if it’s cold and wet, this suit is in its element. 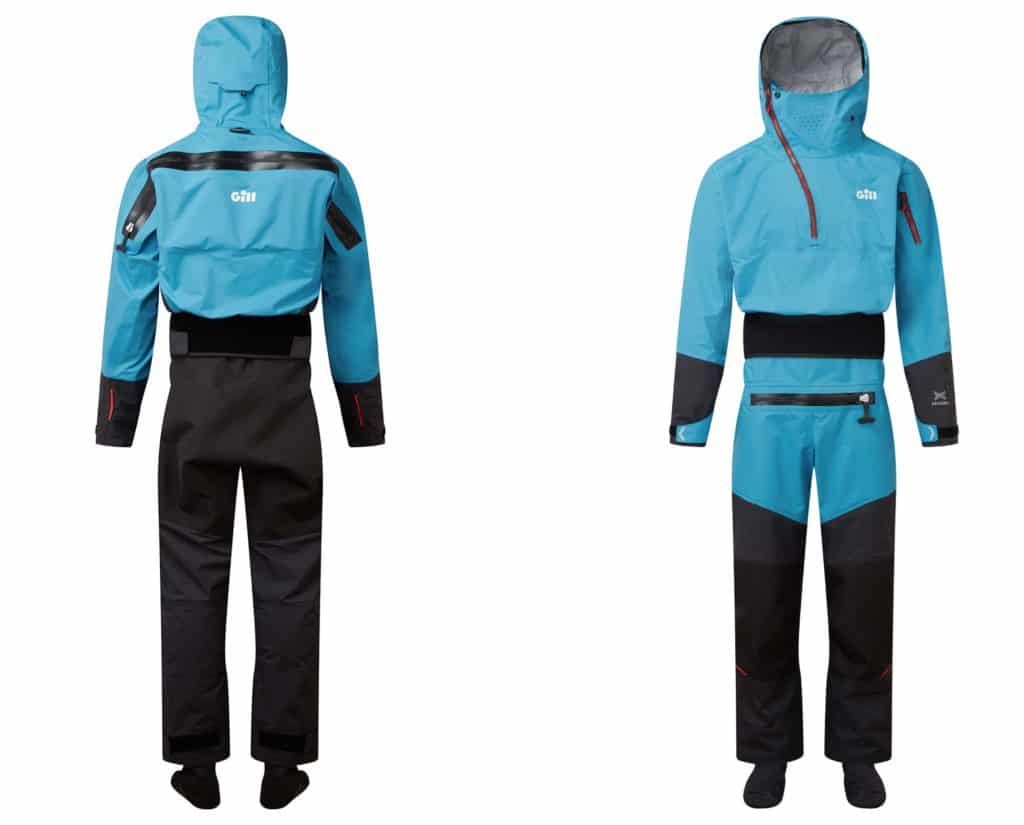 Gill’s Verso takes the traditional drysuit up a few notches with the inclusion of a hood and a host of great details to produce an amazingly versatile suit. Well priced to boot. Courtesy Gill

With cincher cords to hold the hood close to your face and a breathable chin guard that can be zipped into place, you’ll probably stay about as comfortable as is humanly possible. The hood can be rolled up and secured when not used. The jury is still out about how comfortable this would be on the back of your neck long-term, but our guess is most people will simply let the hood fall back when not in use. If you’re using this for dinghy sailing, you’ll probably want the hood rolled, especially if you sail a boat with a low boom. A couple of other features we really liked: an easily accessible pocket on the upper left arm for small items and—wait for it—a relief zip. This alone is probably worth the price of admission. There’s no women’s version with a rear zip, however.

On the technical side, the suit has the requisite neoprene seals at the neck and wrist, all of which can be easily trimmed using Gill’s built-in trim lines as guides if a slightly looser fit is desired. The body of the suit is made of three-layer waterproof, breathable laminate fabric. The integral booties are also made of the same laminate for durability and ease of sliding into footwear. Rear-entry and relief zippers are German-made TIZIP, which do require occasional lubrication. Available in gray or a special edition “blue jay” blue. $850.