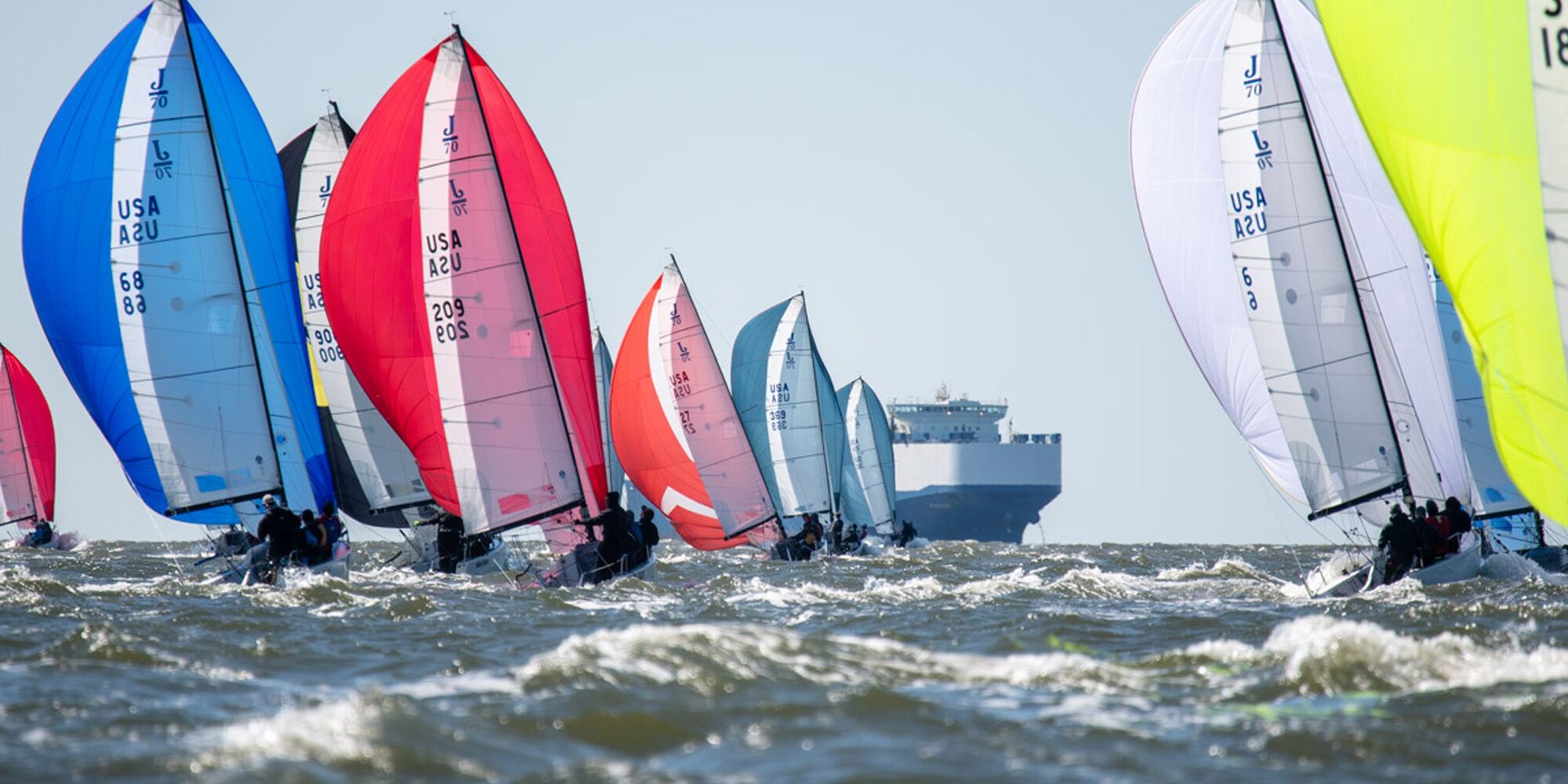 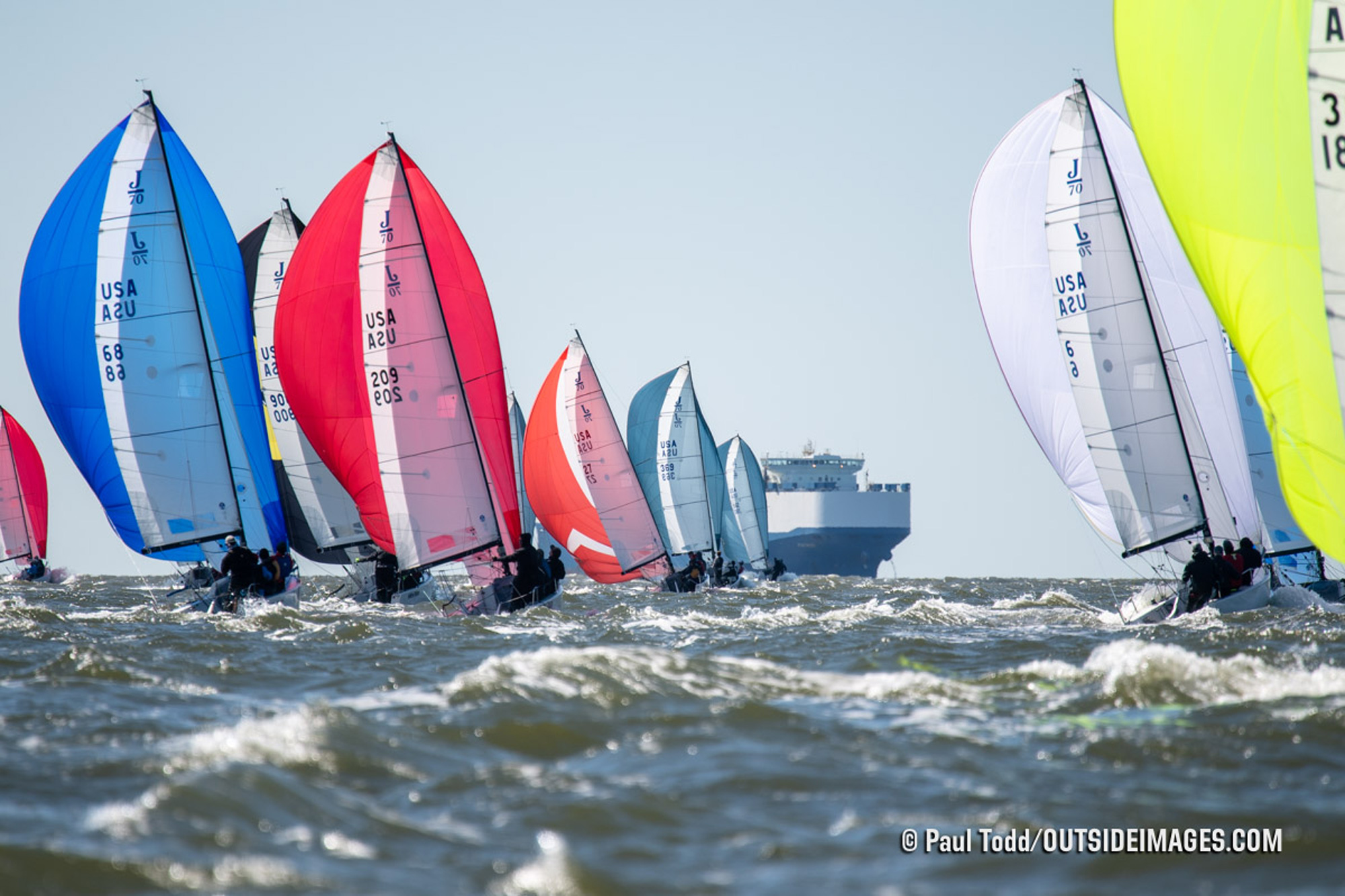 The J/70 fleet enjoyed fresh conditions on the opening day of the Helly Hansen Sailing World Regatta Series Annapolis in 2021. The fleet returns with an equally competitive line up for 2022. Paul Todd/Outside Images

Maryland’s colonial state capital city is surrounded by vast waterways that stretch deep from the interior into the greater Chesapeake Bay, which is why Annapolis is hailed as a sailor’s playground and residents call it “The Sailing Capital” of the United States. This will be especially true when the national Helly Hansen Sailing World Regatta Series hosts nearly 200 racing sailboats and crews over the weekend of May 13-15.

As the Chesapeake’s most popular early-season regatta and an important East Coast destination for keen traveling sailors, the Helly Hansen Sailing World Regatta Series Annapolis stop draws locals as well as competitors from 18 different states and Canada who come annually for the high level of competition. Teams of professional and amateur sailors will race in a variety of keelboat classes, ranging from 18 to 40 feet, on four individual race areas established on the waters south of the iconic Bay Bridge. This area of the Chesapeake is known for reliable spring winds but also its notorious and tricky currents that provide an unpredictable element to every race.

While many teams will splash their boats early to train and prepare for the expected racecourse conditions, the bulk of the racers will launch Friday morning (May 13) from Annapolis’ three active sailing clubs. Regatta host Annapolis Yacht Club, along with Severn Sailing Association and Eastport Yacht Club will provide professional race management.

The regatta’s bigger boats will race on a course set furthest south near Thomas Point Lighthouse while the smaller boats will be spread across three race areas due east of the entrance to the Severn River. On Saturday, organizers will also host the North Sails Rally Race, a one-day distance race in which competitors will sail a long course using navigation buoys located throughout the bay and finishing off the U.S. Naval Academy. Among the Rally Race fleet will be two-person teams as well as bigger boats scored using a time-correction handicapping system.

The bulk of the regatta’s entrants, however, are “one-design” classes; classified as different boat types that are essentially identical in construction. The most popular among the one-design classes today is the 23-foot J/70, which is typically raced with a crew of four or five, coed teams consisting of professional and amateurs together. The J/70 is easily trailered so the class maintains a busy winter racing schedule, and for many teams, the Helly Hansen Sailing World Regatta Series in Annapolis is the culmination of a season’s worth of races before teams continue their migrations back to the Midwest and New England for summer racing.

While Annapolis is a popular stop for these traveling teams, the local sailing scene is more robust than ever given the reported increase in sailing participation during the height of the Covid-19 pandemic. One-design classes that are traditionally strong at this Annapolis regatta are even more so this year, including the competitive Viper 640, a 21-foot three-person sportboat that’s fast, fun and physically demanding. The Viper 640s, with 27 teams registered, will be the regatta’s largest fleet and will sail for its Atlantic Coast Championship Trophy—in the absence of 2021’s defending regatta champion skipper Tyler Moore.

“Tyler sold his boat and is boat-less at the moment,” says local skipper Mary Ewenson, who was third overall in 2021, “but there are a few new teams that are very good. My team is light [weight], so given the forecast is for lighter winds, I’m liking our chances this year.”

The ever-popular J/22 class, a fixture of this regatta series, which has been held in Annapolis for more than three decades, has 23 teams on the pre-race entry list, with one notable absence in J.R. Maxwell and his teammates, who won this division and the regatta’s overall title in 2021. Maxwell and his crew have switched to the 26-foot J/80 division, which has 21 entries, including several from out of town. The J/80 class will contest its North American and World Championship in Rhode Island in the fall, so many of the teams are using the Annapolis regatta as an early start to their world championship training.

The seven-boat Etchells division will also be using the Helly Hansen Sailing World regatta as a stepping stone to its World championship in Miami next spring as the top team in Annapolis will earn one championship berth.

The regatta’s toughest local fleet will undoubtedly be the J/105 division. With 23 entries—all but two of them hailing from the Annapolis area—this class enjoys its reputation as a lower-cost, harder-to-win racing experience, and with strict rules ensuring each boat is identical as possible, success comes not from the vintage of the boat, but from the skills of the sailors, the teamwork, and mastery of the racecourse.

Ray Wulff, a top-shelf local who only recently made the J/105 switch from the J/70 class, has been fast out of the gate in some early season local skirmishes. He says he has sailed plenty of “other peoples” J/105s over the past 20 years, but now he’s the one with the tiller in his hand. His boat, Patriot, didn’t need much work after sitting on the hard in a yard in Annapolis for a few years. He stripped out its wheel steering and swapped it with a tiller, and replaced the halyard clutches, which don’t get a lot of use these days anyway.

“We are still learning the fast setup,” Wulff says, “but we do a bit of inhauling on the jib, using the weather sheet. We’ll keep that on the weather winch and always play it. We also keep the halyards on the cabin top winches because we are always playing halyard tension. The cunningham? Skip it; sometimes we’ll luff the main for a second and grind the halyard up, so the sail looks like the sailmaker intended it to be. A lot of people rely on the clutches and the boat isn’t as efficient as it could be.”

The critical point, he adds is: “The boat doesn’t have that many adjustments, which makes the adjustments that you do have all the more important.”

In terms of big-fleet and small-course management, Wullf’s advice is to do whatever it takes to get clear air—but don’t look for it in the middle of the racecourse. “With the [J/105’s] giant keel profile and big rudder, these boats throw a lot of bad air and bad water, so we really just try to stay away from other boats and keep our maneuvers to a minimum.”

There are several returning—and now legacy—classes of the Helly Hansen Sailing World Regatta in Annapolis, the oldest among them being the classic Alberg 30s, which will contest their coveted Maple Leaf Championship Trophy, which means outsmarting Patrick Seidel, of Trappe, Maryland, and his team on “Laughing Gull,” which went undefeated in 2021. The J/35s, J/30s and J/24s have smaller numbers, but that often results in closer racing.

New to the regatta will be the Beneteau First SE class with owners and crews traveling in from outside the Chesapeake Bay. The Helly Hansen Sailing World regatta in Annapolis will be the first time that skippers of these 24-foot sportboats will have competed against one another and will sail a unique distance race each day before joining fellow regatta participants at the nightly parties hosted by Annapolis Yacht Club.

When the Annapolis regatta concludes Sunday, May 15, one class-winning competitor will be selected to compete in the Helly Hansen Sailing World Caribbean Championship in October in the British Virgin Islands.