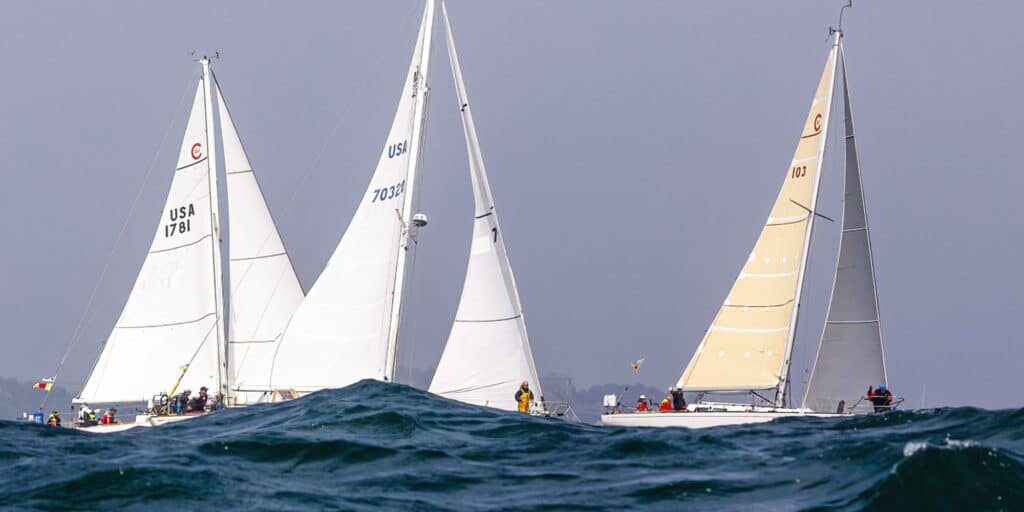 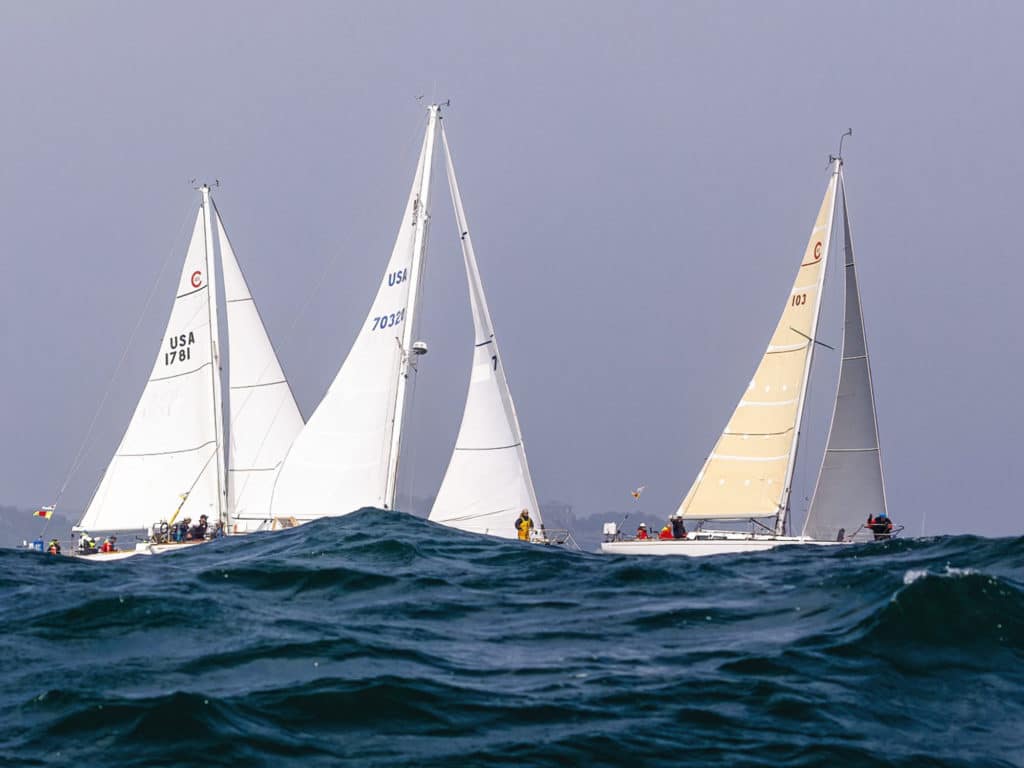 The Newport Bermuda Race’s Class 10 starts off Newport’s Castle Hill and into an incoming fog bank. Stan and Sally Honey’s Illusion, sail No. 103 at right, led its class from start to finish. Scott Trauth

It’s hard to believe that Stan Honey, the Hall of Famer and navigational wizard of globe-girdling race boats big and fast, had never sailed the Newport Bermuda Race on his vessel. He’d completed the course plenty of times on boats built for line honors and setting records (check and check). But there he was on a late June morning backing the family Cal 40 Illusion into a slip at the Royal Bermuda YC not long after the big boats had arrived. In a few days, Stan and his teammates would be confirmed as Class 10 winners and the next engraving on the St. David’s Lighthouse Trophy. It would be the last time Stan and his Hall of Fame bride, Sally, would race their Illusion as its caretakers. Fittingly, it was, in Stan’s own words, “a terrific experience.”

“Our race was all about preparation,” says the 67-year-old navigator, whose team sailed the 635-mile course in 87 hours. “We had an unimaginably good crew, perfect sails, a perfect bottom, and we were lucky that we were the right-size boat.”

There’s a lot of truth to the saying that one makes one’s own luck, and it’s equally true that this team of five friends from the West Coast did indeed craft their own good fortune—and then some.

The Honeys have owned their Cal 40 Illusion for 33 years, with their first ocean race for the boat being the 1990 Pacific Cup from San Francisco to Kaneohe, Hawaii, sailing doublehanded, finishing second, and beating most of the fully crewed boats. “That was fun,” Sally says. Stan raced the next edition singlehanded, and they followed that up by winning the Pacific Cup’s doublehanded division in 1996.

“When we bought the boat, it took longer than we thought to pull it back out of the state that it was in, which wasn’t very good,” Sally says. “There were bullet holes, fleas and homeless people living in her.”

The boat had been sitting in a Northern California boatyard for seven years, and to say it was in tough shape would be understatement. “We thought we would have her in the water within six months,” Sally says. But reality bit one rainy December day in Santa Cruz, she says. “We were sitting down below going through our lists, and we noticed there were waterfalls coming along inside the hull. We said, ‘Well, I guess we have more to do.’”

The refit that followed included ­removing and replacing all of the deck hardware, and replacing the hull-to-deck joint, an ongoing effort that has resulted in there being “almost nothing original on the boat,” Sally says. They’d originally bought the boat to go cruising after racing 505s for decades, but in 2014, after dozens of coastal races, they finally committed to “cruising her.”

They spent the next five years linking passages on and off, sailing down the West Coast, through the Panama Canal, and then up the Eastern Seaboard. “We got to know the boat in a different way—as a cruising boat,” she says. But at some point, Stan had the itch and the urge to enter Illusion in the 2020 edition of the Cruising Club of America’s Newport Bermuda Race.

“Stan had to talk me into it,” Sally says. “I was enjoying the cruising, and he said we had to do one more Bermuda Race.”

Of course, like everything Stan Honey does, this was calculated and carefully considered. “We’d bought the boat when I was 33, and we’ve sailed it very hard in both ­single- and doublehanded races, including five Hawaii races, and dozens and dozens of inshore races,” he says. “But as we’ve gotten older, it’s been hard to sail the boat as hard, so I thought it would be fun to do one more race where we could sail the boat really well.” 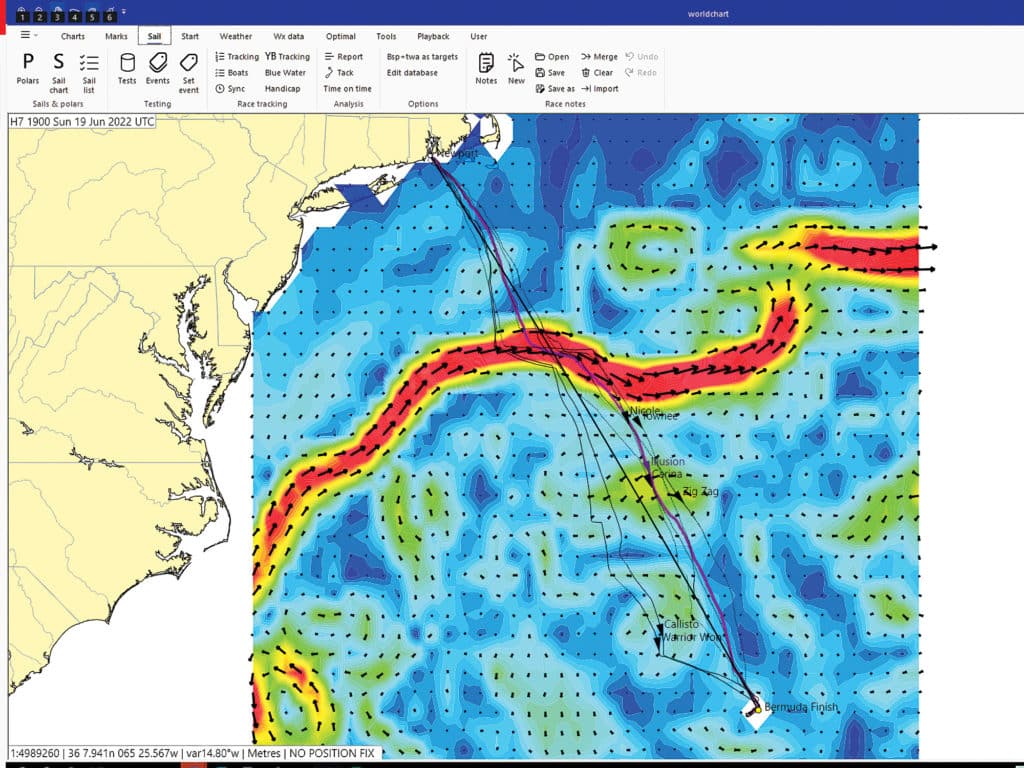 Showing once again why he’s the top navigator of his generation, Stan Honey executed his Bermuda Race and Gulf Stream strategy with precision. Stan Honey

If they could get the best possible ­amateur crew for the race, who would it be? Stan asked Sally, to which she responded: Don Jesberg, Carl Buchan and Jonathan Livingston, all West Coast friends and sailing legends themselves. “But I said they’ll never agree to go with us.”

On that one and only point, she was wrong. Within 10 to 15 minutes of Stan sending an email to the three of them, the universal response was, “I’m in.”

“When they immediately responded, it was like, OK, I guess we’re going to do it,” Sally says.

With the COVID-19 pandemic ­eventually shuttering the 2020 running of the race, however, the Honeys resumed cruising in the Northeast, with two seasons in Maine. As the 2022 edition approached, they enquired once again of their crew, and Sally’s dream team remained committed.

Jesberg, she says, owns a Cal 40 on the West Coast and came with a quiver of sails, and Buchan came with his unique Olympic-medal-winning skillset. “He’s inhuman in his way of steering through anything,” Sally says. Stan says he’s an alien. “He gets into a zone, and he’s just amazing. Jonathan is a fabulous guy on the foredeck.”

With nearly 10,000 ocean miles ­having slid past the boat’s perfectly smooth bottom, Illusion was well-prepared and equipped to win when the Honeys and their mates set off with the Class 10 start on a sun-and-fog-kissed afternoon in Newport on June 17. 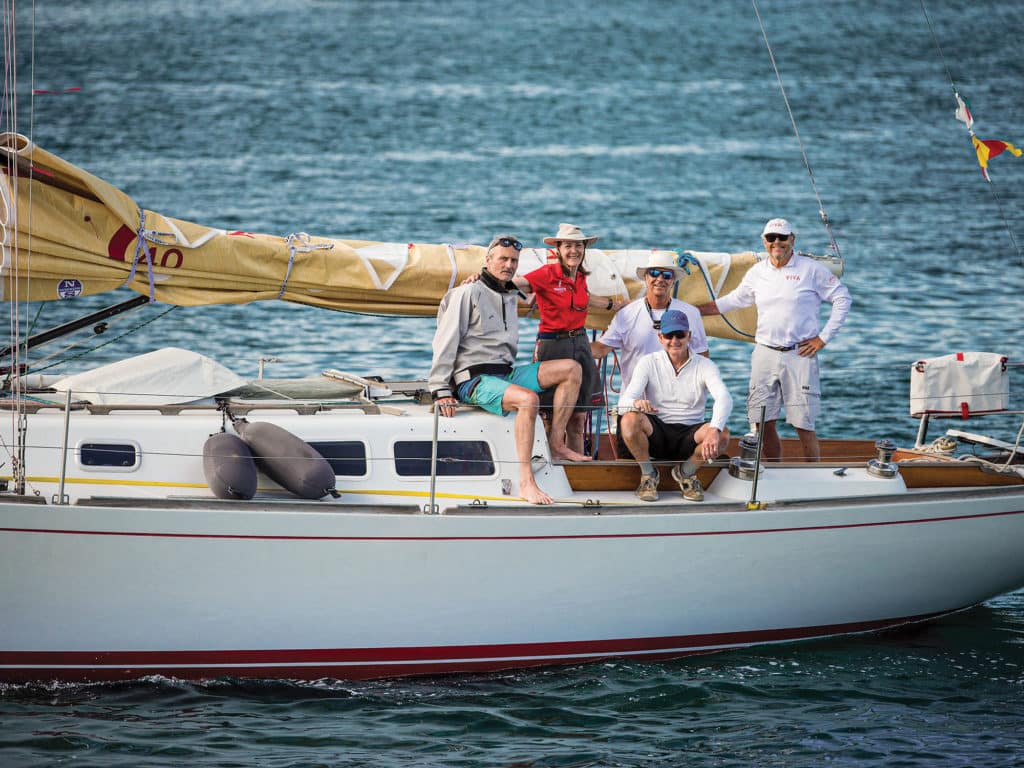 “Leaving the start, we were the leeward-most boat,” Stan says. “In fact, people were yelling at us for missing Mark 2A because they were confused about Mark 2 and Mark 2A, but we were the leeward-most boat in order to be able to get to the [Gulf] Stream easily and where we wanted to enter it. We knew we were going to get lifted and didn’t want to have to fight low to enter the top of the meander. We got within about 3 miles of my entry-point goal. We started out east and then went west to the Stream entry point, and then the Stream took us east again. We only jibed twice in the Stream to stay centered up in the eddy.”

The eddy that Honey had targeted proved to be the magic carpet ride they needed to jet them down the racecourse, and you can bet your sextant the winning move was all very calculated.

“It played out as expected,” Stan says. “There is some stuff [in the models] that I set aside as being unpredictable—like the first set of eddies that are south of the Stream. That whole area down there… All the models show stuff, but I have learned to have so very little confidence in it that I won’t invest in miles to optimize for it. If I’m confident in a model, I’ll trust it for the Stream, for eddies north of the Stream and for the single eddy south of the Stream, but nothing south of that. So, that part was just luck of the draw.”

You heard that correct: Seven hours of fast sailing with a 4-knot turbo boost.

“[Stan] chose a good course,” Sally says with a chuckle. “The conditions were just what the boat loves—heavy air reaching—and it was perfect. When reaching with this boat, she just heels over, and the more wind you get, the faster she goes.”

With staggered four-hour watches, every two hours someone new would come on deck. Jesberg and Sally swapped with Livingston and Buchan, allowing Stan to do his thing on deck, in the nav station and in the galley, making coffee and serving up Sally’s fresh lasagna.

“Don was terrific on what was happening next, and plotting it out and keeping everything organized so that everyone knew what was going to happen,” Sally says. “Stan would call the jibe, and Don would do the details.”

And whenever Buchan was on the helm, they made haste toward Bermuda. “He has total confidence,” Sally says. “He doesn’t chatter at all—he’ll talk, but there are times where he’d say, ‘I’d love to talk to you now, but I can’t…’”

“During the race, you’re totally focused on doing everything you can and taking Advil when you need it. But all of a sudden, when you finish, you can appreciate what’s going on, let out a sigh that you’ve done it. We fulfilled what we wanted to do.”

It’s perhaps fitting that Buchan logged the team’s top speed—a burst of 22 knots, which Sally says was one of the true highlights of the race: “We were on starboard, and I was behind him playing the sheet. There was one wave that started to pick him up, and another wave behind that and then another—it was at night and I’m going, ‘Woo, woo, woo!’ Which woke everyone else up. Stan came up and asked what’s going on.”

“Cal 40 surfing is like surfing a brick off a curb,” Stan says. “It goes really fast for a short period of time.” For the record, it’s not the boat’s personal best, Sally says. That was 25 knots in the Pacific Cup, with the two of them under spinnaker outrunning a squall.

With an early jump on the fleet, the crew on Illusion were confident in the yellow brick road that Stan had laid out for them, and the final stage went according to plan as well.

“We knew the wind was going to shift to the north and northeast toward the finish,” he says, “so we worked our way west again to be inside that final shift and came into the finish on port. Overall, we went east, west, east and west over the course of the race.”

The early-morning finish was “magic,” Sally says. They were confident they’d done all the right things to give Illusion its Bermuda Race win. “It was beautiful seeing all the tall masts in front of us, and I thought, What are we doing with all the big boats? I’ve done two Bermuda Races in very different conditions, and it was pretty amazing. During the race, you’re totally focused on doing everything you can and taking Advil when you need it. But all of a sudden, when you finish, you can appreciate what’s going on, let out a sigh that you’ve done it. We fulfilled what we wanted to do. It’s a great way to end it, and we have done everything we can think of with her, so it’s the final chapter.”

It may be Stan and Sally’s final race with the boat (they’ve since bought a powerboat to cruise), but it’s certainly not the last we’ll see of her. They’ve sold Illusion to their nephew, so it remains in the family.

“She’s not out of our lives,” Sally says. “We brought her back to life as a full racer, and now we’re hoping our nephew and his soon-to-be wife will fill it up with little kids and turn it into a family boat and start another chapter.”

Whatever happens will happen, she ­concludes, before reflecting on the fact that her father sailed the Bermuda Race eight times back in the ’60s and ’70s, and that was her first race with him. “He loved it, and so it’s nice to know whatever happens, up there he’s smiling.” ν

Editor’s note: The Honeys’ account of their Bermuda Race experience was one of many competitor interviews recorded at the Royal Bermuda YC, which are viewable on the Newport Bermuda Race’s YouTube channel.