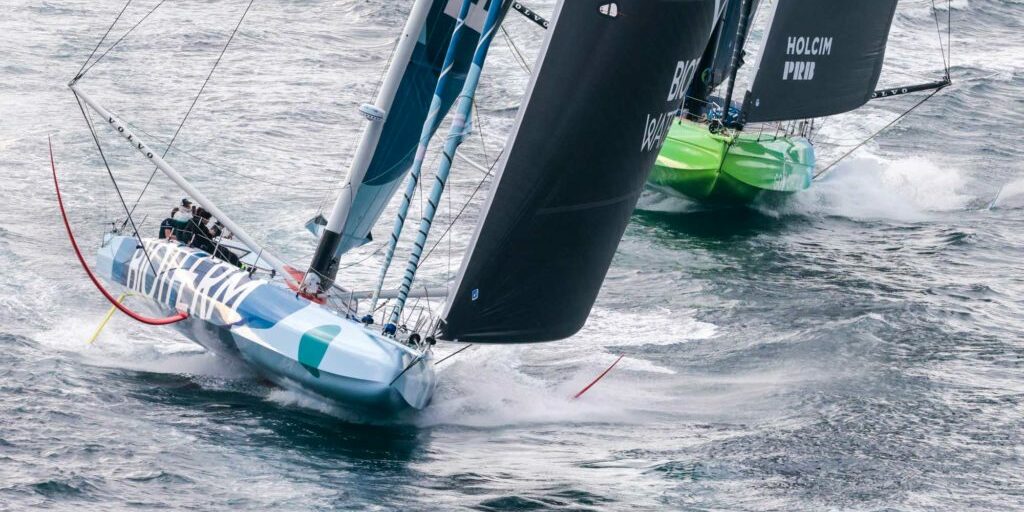 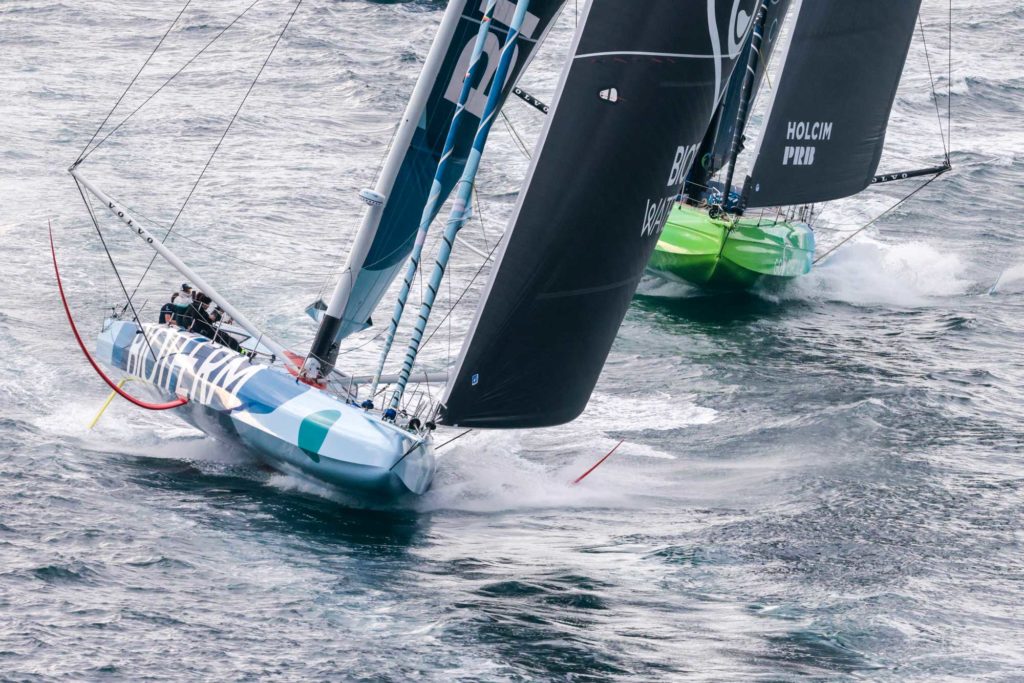 The 2023 edition of The Ocean Race kicked off with an In-Port salvo amongst the five IMOCA teams that will complete the full lap and VO65s entered in the Sprint Cup (specific legs). Light and shifty winds and the varying design traits of the IMOCA 60s contributed to a number of lead changes with Biotherm & Holcim – PRB Team ceedeing victory to Team Malizia on the final leg.
© Sailing Energy / The Ocean Race

Celebrating its 50th jubilee year, The Ocean Race has been reborn, “Racing with Purpose” to promote ocean health, and welcoming the high-tech, foiling IMOCA fleet into the race, alongside the VO65s who are returning for a third race. On what turned out to be a warm January weekend in Alicante, nearly 50,000 fans enjoyed the opening days of the race in Ocean Live Park, while the VO65 and IMOCA teams took to the waters off the ‘Puerto de Salida’ for Sunday’s In-Port Races.

Team Malizia, sailing under the German flag, won the In-Port Race Alicante after a frenetic battle that saw four of the five IMOCAs hold the lead at some point during a highly unpredictable and nerve-wracking contest. The fastest starter in about 9 knots of wind was Biotherm, skippered by Paul Meilhat, of France. However, a smaller J2 headsail choice worked well for the American 11th Hour Racing Team, skippered by Simon Fisher [standing in for skipper Charlie Enright, isolating with Covid]. The American boat semi-foiled into a small lead by the first turning mark.

At the end of the second leg, Fisher’s crew elected to continue on starboard for 200 meters before jibing. Meanwhile the two boats at the back, The Swiss entry, Team Holcim – PRB and Guyot Environnement – Team, executed immediate jibes at mark two and launched into the lead past the three boats ahead of them.

Kevin Escoffier, of France, and his Holcim crew shot off down the track to a healthy lead. But then on the upwind leg, all changed again. A big left-hand windshift and a dropping breeze saw Escoffier stranded as the fleet behind hooked into the changing wind direction sooner than the race leader. For the second time, the order turned inside out.

From lying in fourth place, Team Malizia took the lead for a few minutes, only to be displaced by 11th Hour Racing Team who had moved up from last back into first.

Neck and neck down the next leg, the German boat rolled over the top of the Americans and moved into a lead which Herrmann and the Malizia crew would hold until the finish.

“It’s great to come with the win today as we’ve had to work really hard to get to the start line of this race as we had to replace the foils last week,” said Malizia’s Will Harris. “It was a really tricky race. The wind was anywhere between 15 and 2 knots of wind. I think we really showed that we’re quite adaptable. We can really tune this boat nicely and we’ve worked hard to get it set up and to work well as a team.

“It got quite intense after the first lap where we managed to find an extra bit of wind and overtake the boats that were ahead. We realized that we need to sail a much higher mode and managed to kind of stay in the wind while the others got a bit stuck. So good work to Nico (Lunven) and Boris (Herrmann) on spotting the wind and spotting the right kind of tactical play.”

Taking himself off the boat today, out of an abundance of caution with a lingering positive COVID test, skipper Charlie Enright watched his 11th Hour Racing Team take second across the finish line.

“The nicest thing we can take from today is we were leading the race and were also right at the back at times. But the emotions, the temperament, the attitude, the belief on board, it didn’t ever waver,” Fisher said.

“Obviously, I would rather have started today with Charlie onboard. He’s a really important part of this team and he’s worked so hard to make this project happen. I was wishing with all my heart this morning that he would be with us, but sadly it didn’t work out that way. But I’m very happy that we did a good job for him and we’ve left one more spot on the podium to aim for when he comes back.”

“That was a very good race for us because the boat hadn’t even got wet five days ago,” said Damien Seguin from Biotherm. “It was good to be on the start and it was a magic moment to be racing. We made a really good start and third place was good for us.”

As for Team Holcim – PRB (SUI), Escoffier’s crew were dealt a poor hand by the fickle wind and will feel unlucky to have lost the lead the way they did. The Swiss will console themselves that across the next six months of circumnavigating the planet, the luck should even out across this competitive fleet, but today the wind gods decided to smile upon Team Malizia.

In barely a breath of wind, WindWhisper Racing Team ghosted across the finishing line the VO65 In-Port Race Alicante by a comfortable margin. Such was the lead established by skipper Pablo Arrarte, of Spain, and his predominantly Polish and Spanish crew, the other five boats failed to finish inside the 15-minute time limit which started ticking the moment WindWhisper had slipped across the finish line. 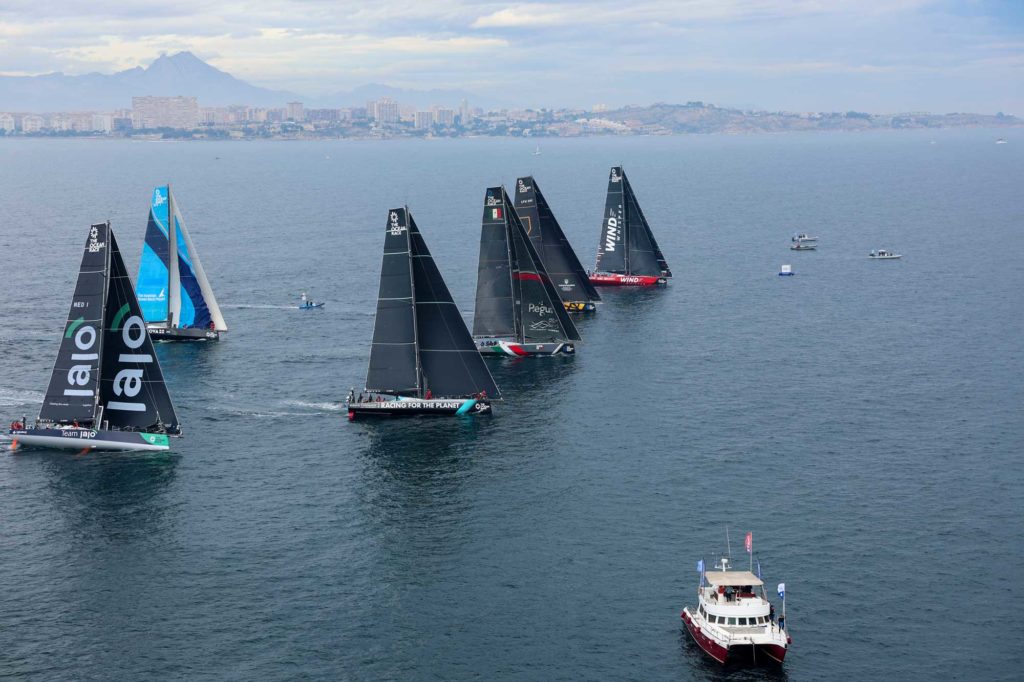 The VO65s of the The Ocean Race Sprint Cup make a run for the start line during the opening Alicante In-Port Race. The Polish entry “WindWhisper” started at the pin to get away before the wind shut down, netting them the only points of the race when all others failed to finish within the time limit. Sailing Energy / The Ocean Race

Out of the reaching start, with the wind off Alicante barely reaching 4 knots, four of the six boats started neck and neck on slightly different sail configurations. But it was the most leeward position of WindWhisper that edged the Polish boat into pole position as the bright red boat rounded mark one of the rectangular course with a slender but critical lead.

As Arrarte’s crew gradually drifted away to a big lead ahead of the chasing pack, battles ensued for the minor placings. However, while WindWhisper was able to maintain momentum, the faltering breeze vanished into thin air, leaving the other five teams stranded, unable to cross the finish line.

Arrarte paid tribute to his team and put their success down to good judgement at the start. “We’re very happy to win the In-Port Race,” said the Spanish skipper, a four-time veteran of the race. “It was very tricky, the wind didn’t help much, but ‘Ñeti’ (crewmember Antonio Cuervas-Mons) made a great call at the start and put us in a good place, which made it a little bit easier [to win].”

So, 6 points for the winner, and no points for the rest. A brutal way to start the campaign for five of the teams, but a chance for redemption when the 1,900 nautical mile Leg 1 of The Ocean Race VO65 Sprint Cup begins in a week’s time, the departure from Alicante to Cabo Verde.