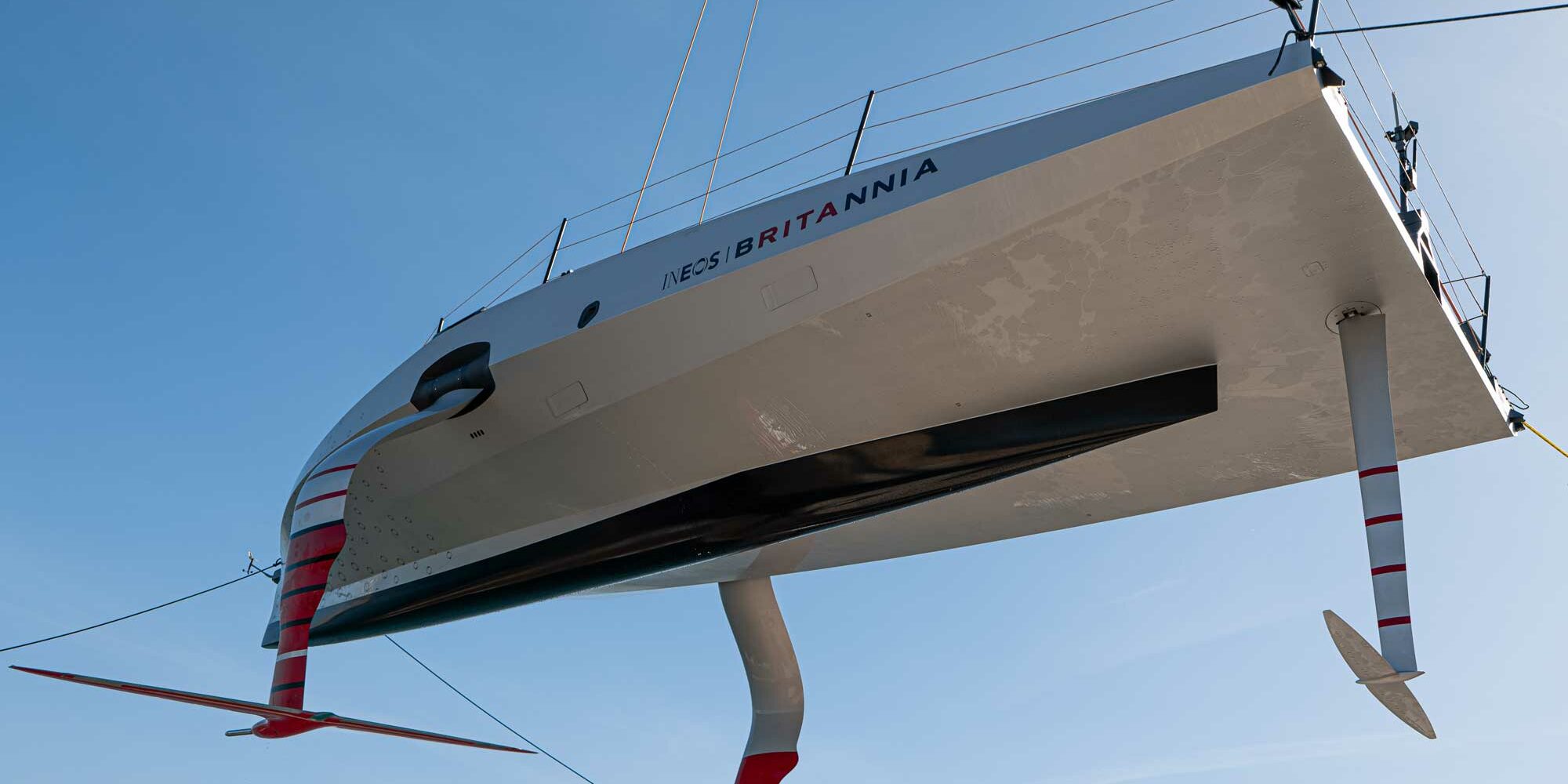 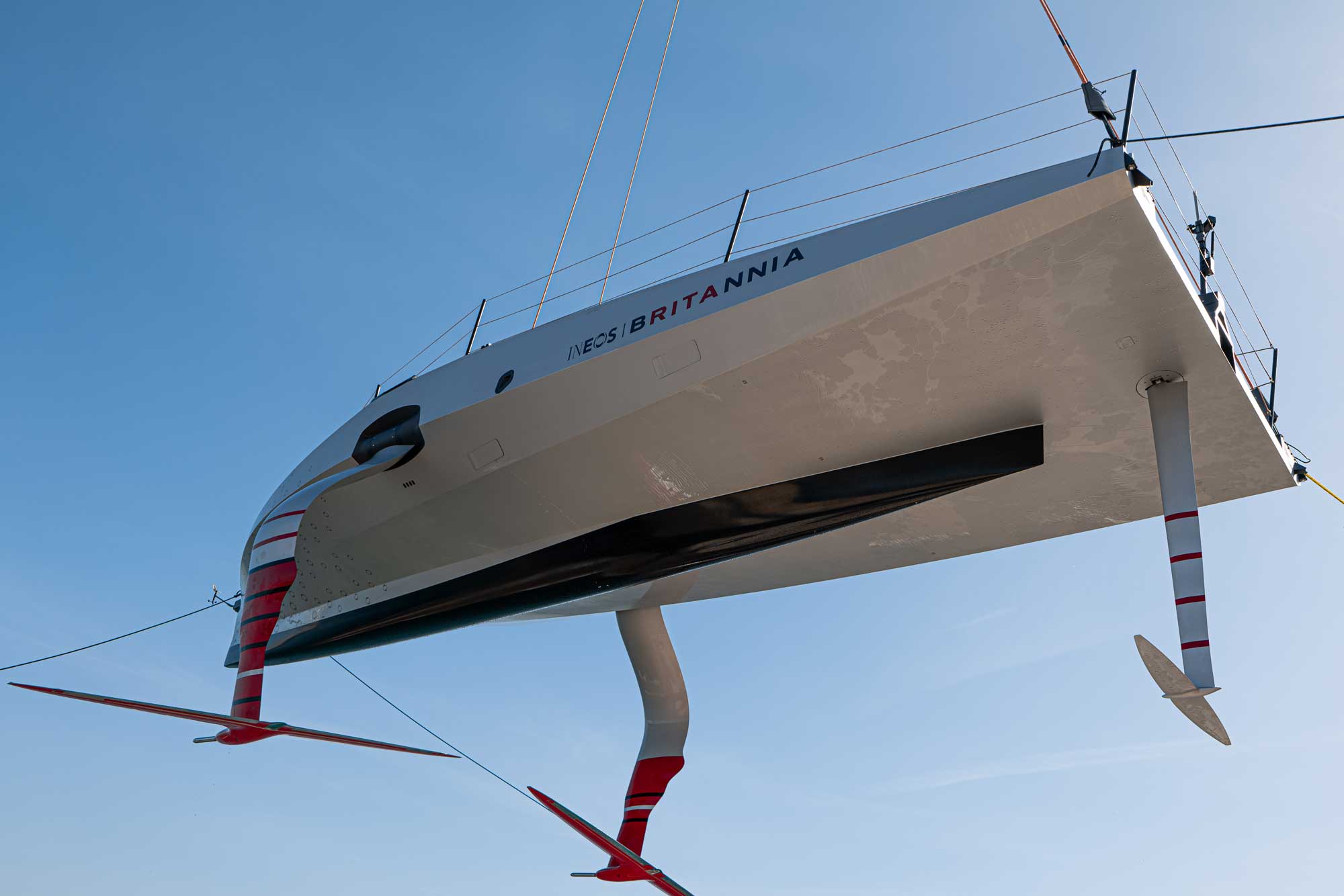 The British America’s Cup team, INEOS Britannia launched its first test boat for the 37th America’s Cup last week. Code-named “T6,” the boat was designed and built-in collaboration with Mercedes-AMG F1 Applied Science, a division of the Mercedes-AMG PETRONAS F1 Team. The launch of this test boat at the team’s training base in Palma, Spain, late last week, marking the beginning of a busy winter for the America’s Cup Challenger of Record. 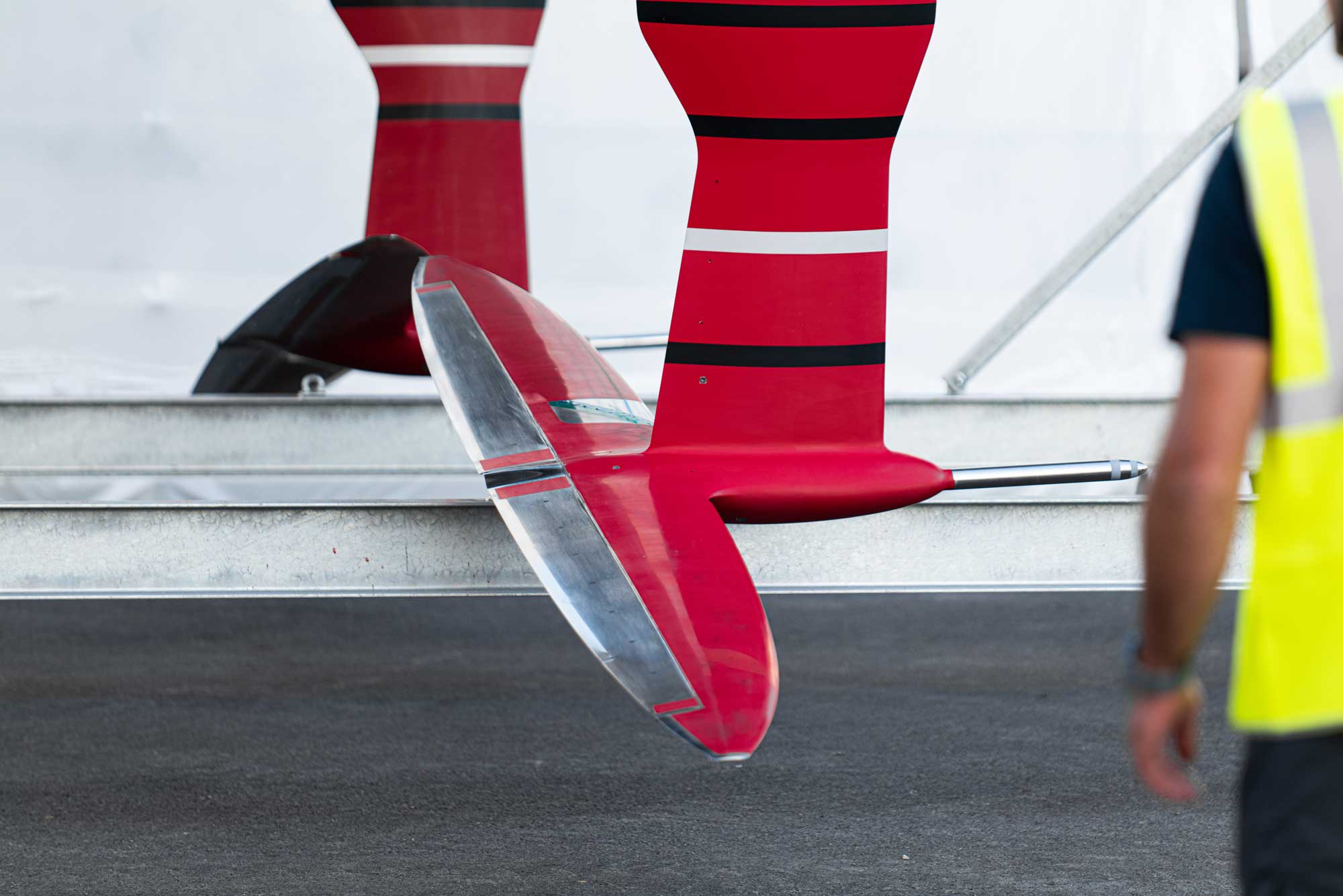 The silver 40-foot development platform, the team says, will play a vital role in “validating the team’s design tools and testing key components ahead of the design deadline to start the build of the team’s race boat.”

“We came out of AC36 lacking confidence in our design tools, we made key design decisions in the last Cup using our design tools and our simulation, and they weren’t accurate enough,” said Ben Ainslie, INEOS Britannia CEO and Skipper. “In the recent America’s Cup cycles we have seen a massive step up in design simulation. However, you must have confidence in those tools, and trust that they’re giving you accurate feedback. T6 will give us that development platform.”

The boat was built by Carrington Boats in the UK before being transported to the home of the Mercedes-AMG PETRONAS F1 Team for its fit out. T6 will now operate throughout the winter from the team’s new base in Palma de Mallorca with live test data and results streamed to the design, engineering and performance teams at the team’s UK headquarters in Brackley, where work is already underway on the research and design of what will become the team’s AC75 race boat for the 37th America’s Cup. 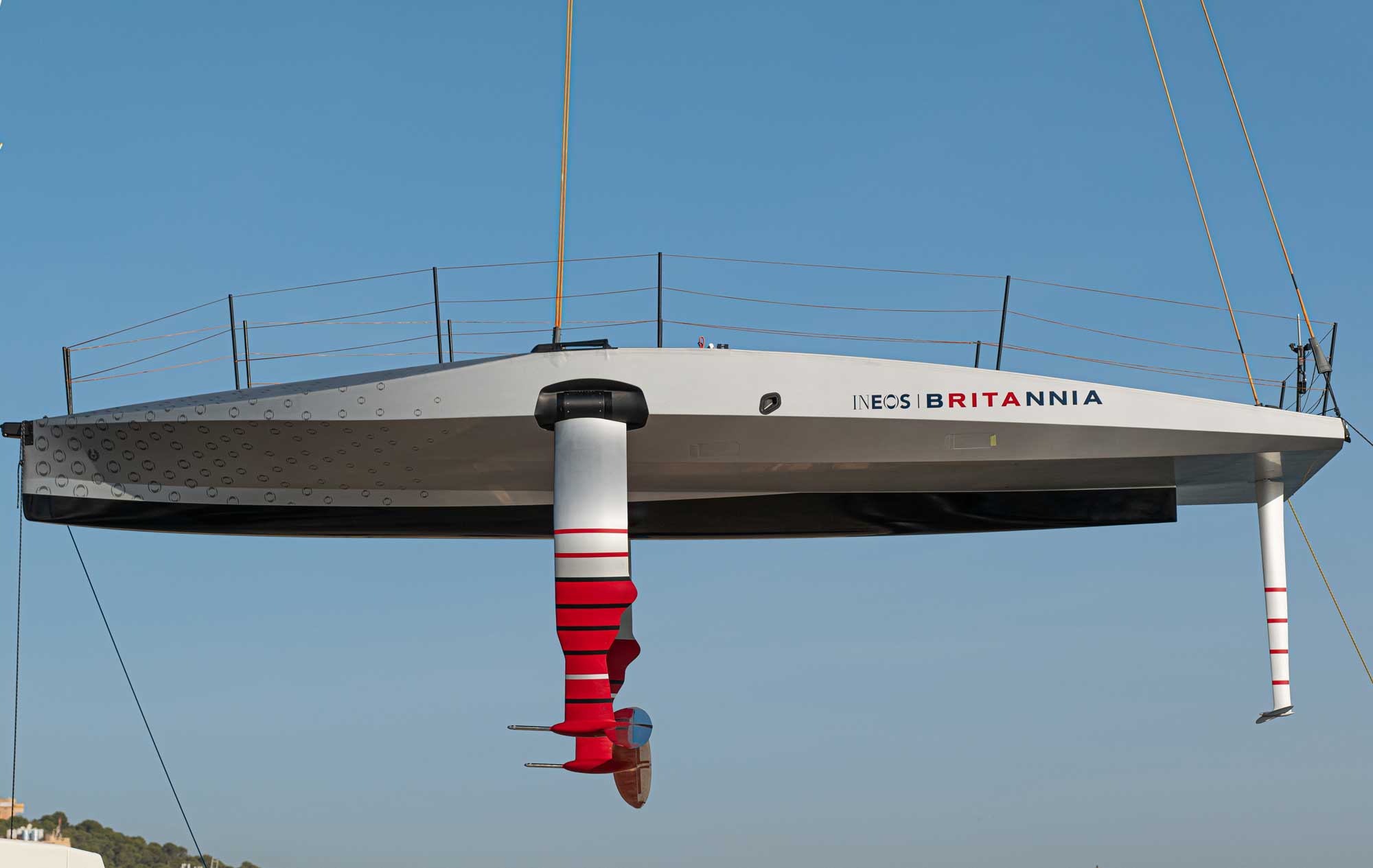 INEOS Britannia’s T6 testin platform is revealed at the team’s base in Palma last week. The boat, the team says, will serve mostly as a design-tool validation platform. Ugo Fonolla/America’s Cup Recon

Teams and curious America’s Cup fans alike are analyzing the angular “LEQ12” with its sharp V-shaped bow profile that quickly transitions to a flat-bottomed and slab-sided hull with a pronounced skeg that runs nearly bow to stern, terminating sharply just forward of the long and needlelike rudder. 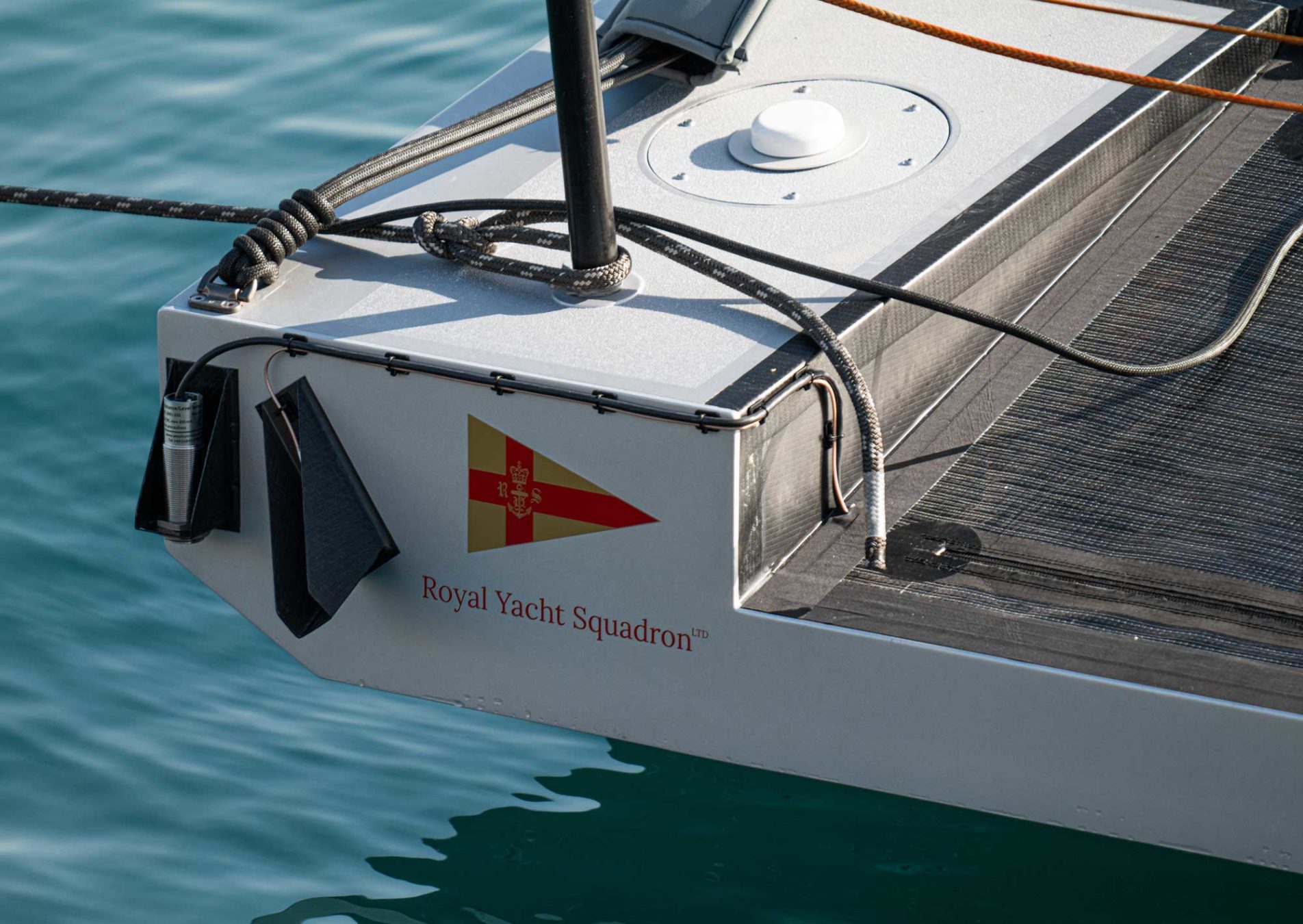 Sensors located throughout the platform will stream live data to Mercedes-AMG Formula 1 headquarters in the UK. Ugo Fonolla/America’s Cup Recon

With an emphasis on aerodynamics and the goal of near-surface flight, the deck slopes upward aggressively from the bow, transitioning to oval cockpits on either side where the sailors will be embedded and control the boat without ever crossing during manuevers. As T6 is primarily a data-collection and design-tool-validation platform, sensors are said to be webbed throughout the boat and according to the team, towing sessions will be the primary focus initially, allowing them to validate concepts before introducing the variability of the wind and sail/rig dynamics.