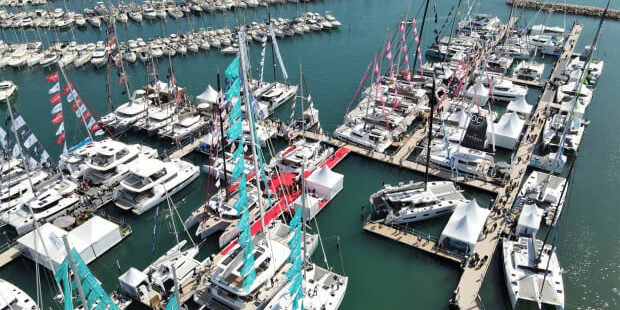 Every boat show now includes a selection of multihulls, as this once niche part of the market is now not only firmly mainstream but continues to grow at a phenomenal rate. Nonetheless, there remains an exhibition that stands out from the rest—the International Multihull Show at La Grande Motte, near Montpellier in the South of France.

Although, a somewhat compact show, it is still by far the best place in the world to make direct side-by-side comparisons between the many different models out there. Many of the smaller yards are also thereby providing a pretty complete picture of the state of today’s multihulls.

Neat ideas I saw at the show this past April included the clever little 6lb washer-drier from Daewoo, which was fitted to the Nautitech 44 Open and Marsuadon Composites’ high-performance ORC42. The system uses a mere 7.4 gal of water per wash and draws a maximum of 1.4kW of power, well within the solar power capacity of many of today’s multihulls with their extensive panel areas. It’s not a brand-new product, having been on the market three years now. But this was the first time I’d seen it installed on a new yacht.

The Catana Ocean Class also made its world premiere at La Grande Motte. This 49-footer is a bluewater cruiser that promises better performance than most. It also features seamlessly blended indoor/outdoor bridgedeck spaces to create a truly giant living area, with a large amidships galley and further seating, plus a navigation station, forward of the mast. Just as Catana Group’s Bali range was a game-changer for more mainstream cruising catamarans, this model looks set to do the same for faster cats designed to cover long distances.

Multihulls, by their very nature offer the potential for high speeds under sail. However, this same performance is all too often compromised by excess weight, which is why builders of spacious yet high-performance craft, like Marsaudon Composites, go to such great lengths to keep their designs as light as possible. In Marsaudon’s, this included the no less than the option of carbon foam sandwich floorboards aboard one of its boats at the show. Another idea that is also a little less pricey was the use of fabric stools weighing only a couple of pounds instead of fixed furniture. These can be moved around wherever they are needed—from the dining table to the nav desk to one of the sleeping cabins, if necessary. Aboard the Marsaudon at the show, the stools were handmade in northwest France out of discarded racing sails by 727 Sailbags.

One of the advantages of owning a catamaran, even if it’s a relatively small once, is the fact you get plenty of cabins with proper rectangular beds. These in turn offer the potential for scads of stowage space underneath, especially as multihull engines now tend to be fitted well aft, rather than under the bunks, as was the case with all too many multihull designs in the past. Unfortunately, all this potential stowage space is often difficult to access, either because its awkward moving bunks out of the way. However, Excess Catamarans has now solved this through the use of hinged locker lids that are held open with gas struts strong enough strength to support each not only the, but the bunk’s cushions as well.

A common theme at the 2022 show was sustainability and the extent to which France’s marine industry is working to reduce carbon emissions and introduce more environmentally friendly construction materials. Lagoon, for example, is already working toward using 40 percent bio resins along with a greater proportion of sustainably sourced fibers. In a similar vein, Outremer currently had a 55-footer constructed with fibers made from flax.

Lagoon is also one of many manufacturers offering a wealth of solar power option, with far more capacity than in the past, as well as with things like wind and even hydrogeneration. Combined with low-energy air con systems, this can, among other things, enable a boat’s interior to be kept cool without having to resort to firing up a diesel genset.

Similarly, Fountaine-Pajot is aiming for a 90 percent reduction in carbon emissions by 2030, not just in terms of its manufacturing processes, but in the way its boats are used. This, not surprisingly poses a pretty serious challenge given the fact 80 percent of a boat’s carbon emissions come as a result of the first 20 years of ownership (though emissions related to raw materials and build process are still important and important part of the mix). To this end, Fountaine-Pajot had dramatically increased the number of solar panels typically fitted to its boats, to the point where it’s not unusual for then to leave the factory with 2-3kW of solar panelling or more.

The company is also trialing electric propulsion this year, which will see hydro-regeneration added to the power already being harness by the boats’ solar panels. Initially, these boats will be equipped with “range extender” gensets to eliminate range anxiety. However, the longer-term plan is to replace these with hydrogen fuel cells as soon as the relevant technology has a chance to mature.

Along these same lines Excess Catamarans also has a 48ft Excess 15 with twin 50kW Torqeedo engines, two 40kW batteries and twin 20kW range extender generators. The boat was part of a pilot project this past year, in which it covered 1,750 miles over the course of a number delivery passages along France’s Atlantic, followed by several months of cruising in the Mediterranean, including visits to Sardinia and Sicily. One of the many discoveries made during these various passages was that the motors the company installed were actually much larger than needed. Excess also thinks it could go with just half the battery capacity it installed, plus a single genset, and still be able to provide a decent cruising speed in calm conditions with no worries about range. All good stuff as the industry continues to move forward in this area.