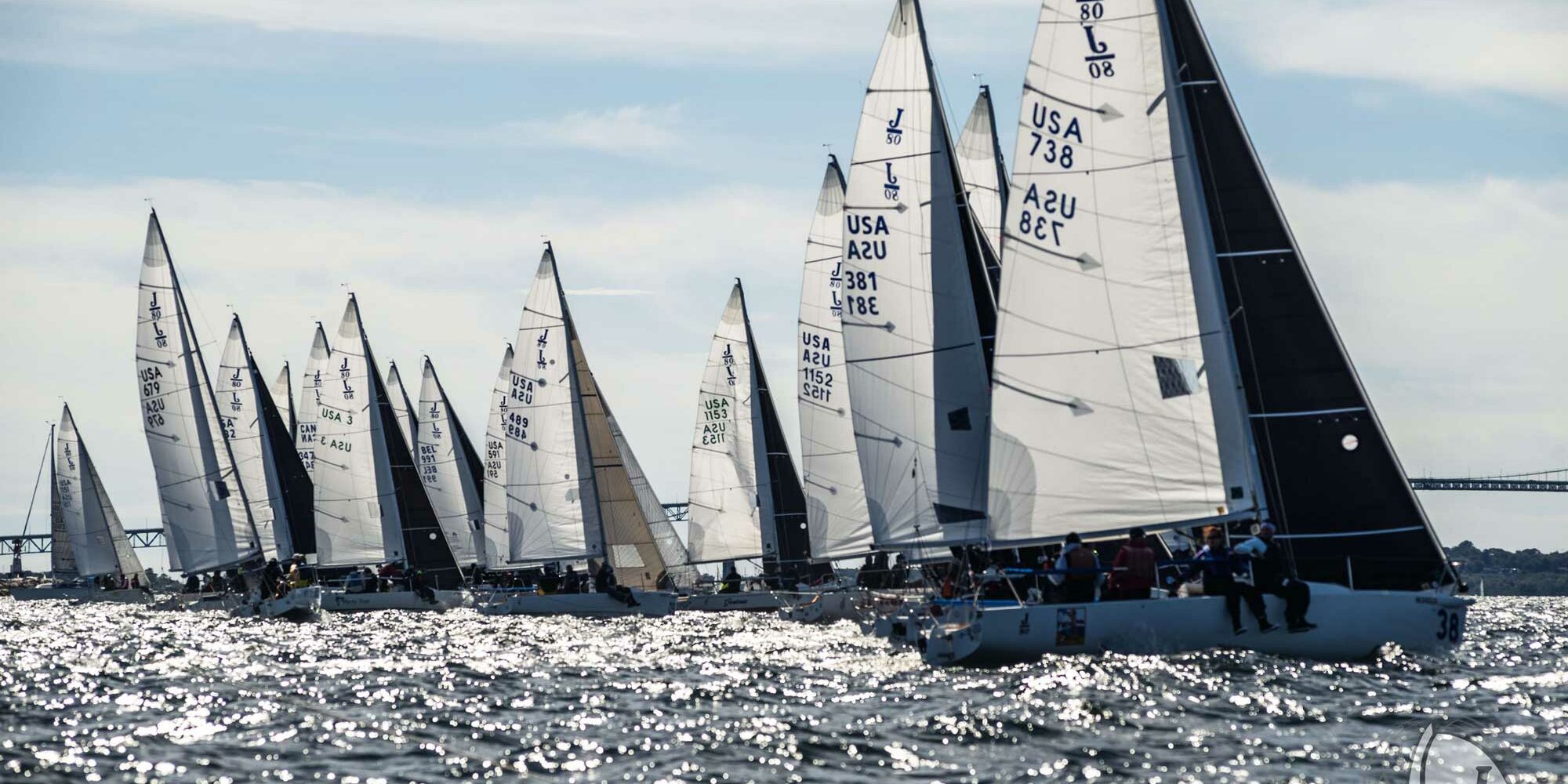 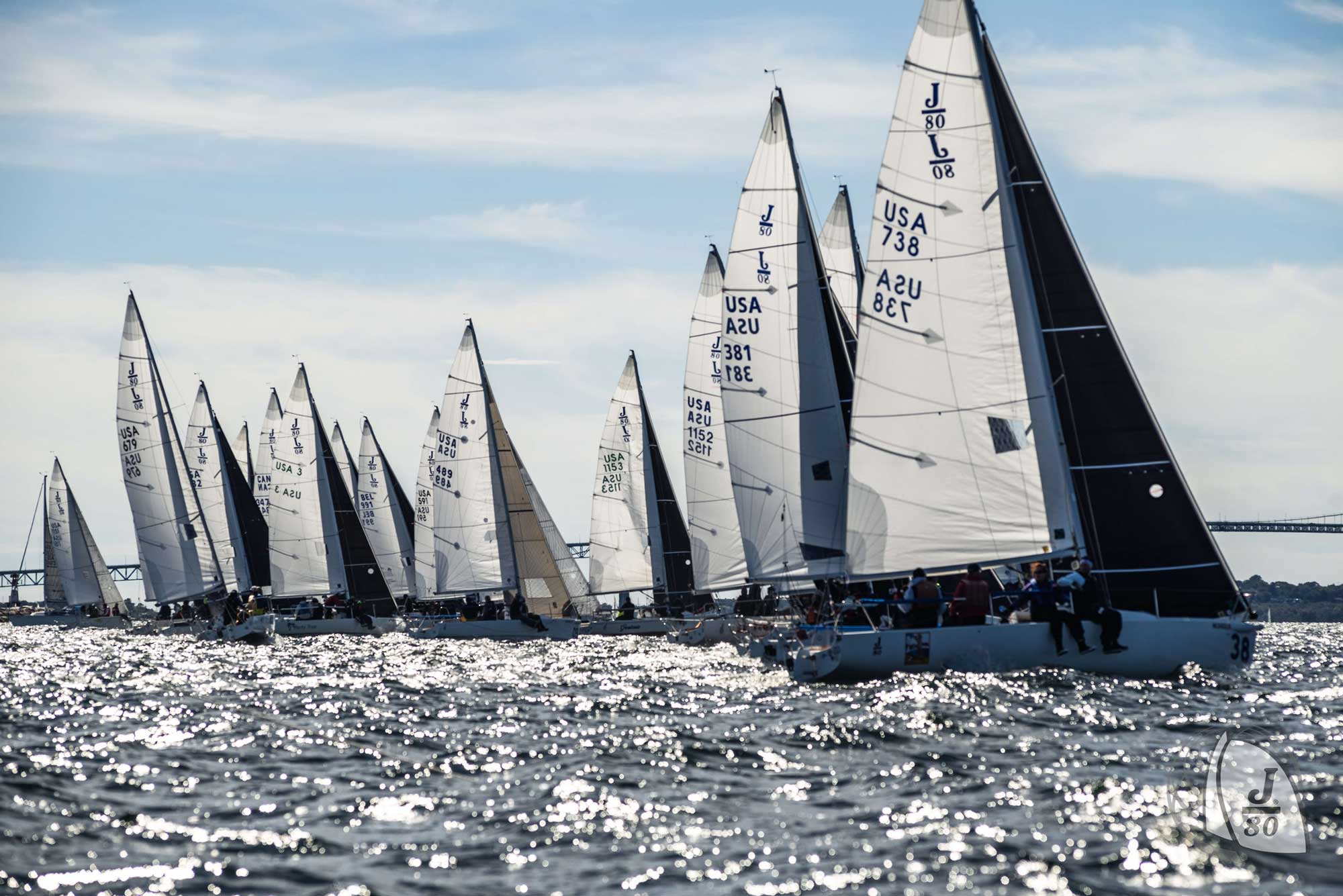 The J/80 Class North American Championship in September served as a warmup for the October World Championship, hosted by Sail Newport. The class is enjoying a rebirth with high demand for charter boats and fleet growth across the U.S. Anna Suslova/J/80 North American Class Association 2022

Racing starts October 4 for the 2022 J/80 World Championship hosted by Sail Newport (Rhode Island).  Forty-seven teams of sailors from nine countries will compete for the world title on the legendary waters of Narragansett Bay.

This is the first world championship hosted by Sail Newport since pre-COVID. Sailors have traveled from France, Spain, Belgium, Ireland, Netherlands, Sweden, Canada, India, and from ten U.S. states to participate in racing which continues through Saturday. The world championship was last held in the U.S. in Annapolis in 2014.

Undoubtedly, the U.S. team on Le Tigre, headed by Glenn Darden (Ft. Worth, TX), will be keyed in to win the world title coming off their recent win in the North American Championship.

“We’ve been working hard since the North Americans this past week getting our systems right on the crew work. We’ve spent as much time on the water as possible, trying to get more efficient as a team,” Darden says, whose team frequently sails in Newport events.

The Le Tigre team forged a commanding win on September 25 after finishing in first place in four of the seven races in the series. Darden’s crew includes Victor Diaz de Leon (Miami, FL), Rod Favela, (Dallas, TX) and Willem Van Waay (San Diego, CA). Darden also has a first-place trophy from the 2006 worlds on his mantle.

There’s a tremendous line-up of American and European talent throughout the fleet. “We have a great international fleet. The Spanish have led the class for over a decade and it’s going to be a tough regatta,” Darden says.

Sure to be hunting the win will be Jose Azqueta and his Spanish teammates onboard Biobizz Bizkaia. Proving they can top some of the best sailors in the world, the team won second place at the 2021 Worlds in Denmark, 3 points shy of the world title.

Annapolis-based husband and wife team William and Marie Crump are also a team to watch. The Crumps are sailing with family members Zeke Horowitz and Thomas Klok onboard and often sail on Newport waters. The R80 crew has stacked up multiple wins in previous J/80 Class North American events in 2013 and 2021 and an East Coast championship. “It’s awesome to be in Newport, in a place that inspires sailors. It’s exciting and competitive and fun,” says William Crump.

Sailors are preparing for a wide range of weather in Newport this week. A big breeze is forecast for Today with a NE 18-25 knots and gusts up to 30 from remnants of Hurricane Ian.

On Wednesday, the breeze may be more of the same with a bit lighter breeze. Strong gusts will still be a factor and potentially up to 24 knots.

“We are preparing for the big breeze, we have had time together on the water with this crew, and this past Saturday, we practiced in the heavy air and rain. We’re getting the boat ready and tight.  We sail with four, so we’re planning to modify the jobs and spread out the skills onboard,” Crump adds.

Thursday is currently a lay day, and no sailing is scheduled. Friday looks to be lighter at SW 8-14 with gusts to 19, and on the last day of racing, Saturday, a NW 10-17 will finish the series. A maximum of 12 races are planned for the fleet. Racing ends on Saturday.

The J/80 sailboat was designed and manufactured by Newport-based J Boats. The Class is celebrating the 30th Anniversary of the popular one-design racing sailboat, which has built over 1,700 boats to date. J/80s are now actively sailing in 12 countries.

Scores can be found at here and updates available on the Sail Newport Facebook page.