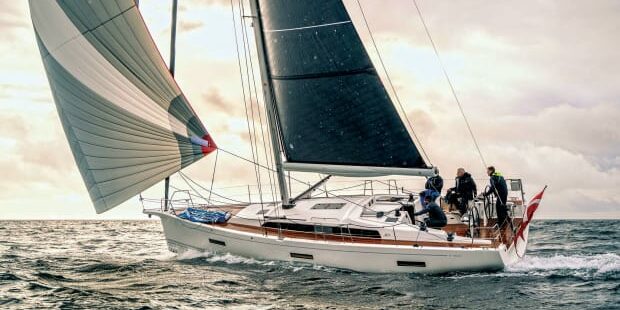 With so many manufacturers dreaming up bigger production boats, more and more mid-sized cruisers fall on the smaller end of their lines. However, “smaller” does not mean less, and the tricks for optimizing larger models have helped with squeezing more enjoyment into less LOA. As seen in these three designs, there’s more than enough comfort, space and speed to be had in this size range—plus so much variety that performance and cruising sailors alike are sure to take notice.

If it ain’t broke, don’t fix it? Maybe not! Despite the X43 being one of X-Yachts’ most popular models ever, the Danish boatbuilder is still doing a redesign to improve on a classic. Since launching in 2016, over 100 X43’s have been sold, but rather than tweak the old X43, the new reimagined 43 will incorporate a number of wholesale changes that take their design cues from its larger siblings. “What we are developing now can be described as a smaller version of the X56,” says director of design and engineering, Thomas Mielec. “The development of the X43 is considered to be a natural evolution incorporating the lessons learned and the visual appearance of especially the X46 and X40, and after having launched the X56, we saw some opportunities for the X43 that will lift her to an even higher level.”

The new X43 features a redesigned hull with soft chines added and the maximum beam brought aft, improving downwind performance and offering more space in the cockpit. A taller mast and longer bow sprit both add to the sail plan’s square footage. Longitudinal jib tracks are standard, but a recessed self tacking track—as seen on the newer Pure X’s—is also available as option. Plus a new sprayhood makes for sleeker lines while providing more protection. Belowdecks, not much has changed but the aft berths have been made wider due to the increased beam, and the tables and heads have been given a modern aesthetic makeover.
x-yachts.com

After the C42, C45, C50 and flagship C57, Bavaria is continuing to add to its C-line with the C38. With simple controls, maximum interior space and a comfortable layout, the Bavaria C38 is a true cruiser, though a sporty Code 0 and gennaker will tempt more performance-minded skippers as well. Together the mainsail and 109 percent Genoa total almost 861ft2 of sail area, and the standard sailplan include a 322ft2 self-tacking jib. When not sailing, the large swim platform makes the most of the open-air lounge space, and the spacious cockpit looks to be well protected. The hull is fabricated out of E-glass with polyester resin and a PVC foam core above the waterline. The boat’s “V-bow” has been designed by Cossug Yacht Design to provide more stability by carrying additional volume forward to prevent the beamier stern from causing the rudder to lose its grip when the boat is on its ear. The V-bow, in combination with a pair of chines, also serves to provide plenty of space belowdecks for things like a table for eight in the saloon (which can be lowered and converted into extra berths). The owner’s cabin—which has been placed in the bow, where off-watch skippers are likely to have a bit of a bumpy ride in any kind of roiled sea state—and the aft cabins all feature surprisingly large double beds. Layouts with two or three cabins are available with one head and the option of an additional en suite head for the owner’s cabin.
bavariayachts.com

Dufour wants the 470 to epitomize its brand renewal, bringing fresh ideas to the sportier side of the mid-40ft market. Drawing on the company’s long-standing expertise, the 470 features Dufour hallmarks like an enclosed cockpit, telescopic davits and a large swim platform. It also comes in the brand’s three versions: Easy, Ocean and Performance. There are also plenty of new features to make this design feel modern and fresh. The hull is a polyester-infused fiberglass sandwich with a PVC foam core. Belowdecks, the saloon looks to be quite wide with high ceilings, giving it the spacious feel of a boat in the 50ft range. The companionway leads directly into the lounge area, which includes the saloon table, a separate bench seat and a chart table, with the galley forward. With this configuration, there are three cabins and two heads. A longitudinal galley is also an option, replacing the extra bench seating, but opening up options for four cabins, four heads or four cabins, three heads and a pullman. Aesthetically, three different looks are available for the interior: “Boston,” a classic, darker finish; “Europe,” a contemporary pale palate; and “Millennium,” a funky combination of light wood and bright teal and gray fabrics.
dufour-yachts.com