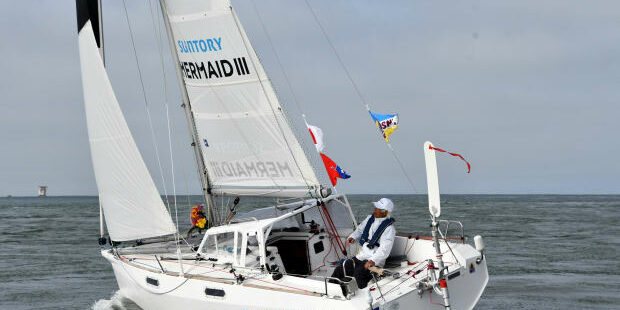 Kenichi Horie, who undertook his most recent voyage last year at age 83, sailing solo from San Francisco to Chiba, Japan, in an 18-foot sloop, is the latest winner of the Cruising Club of America’s Blue Water Medal. The famed Japanese sailor and environmentalist joins a rarified list of sailing luminaries who have been awarded the CCA’s most prestigious honor since 1923.

In announcing its 2022 honorees for a variety of awards yesterday, the CCA noted that Horie “has challenged our thinking concerning boatbuilding materials with Transpacific voyages in yachts made of recycled beer cans, and beer and whisky barrels. He has fitted his yachts with spars of recycled aluminum and sails of recycled plastic bottles. He has explored novel propulsion modalities ranging from solar power to wave power to human paddle drive. The Pacific Ocean has been his frequent venue and voyages both ways between Japan and the American and South American west coasts have continued over six decades of sea roaming.”

While the Blue Water Medal is the highest honor the CCA bestows on adventurous sailors, the organization also awards honors in other categories. For 2022 these are:

Young Voyager Award:
Cal Currier, the 17-year-old who made a solo transatlantic in a 46-year-old Tartan 30 after learning to sail;

To read more about each of these remarkable sailors, go to the CCA news page here: