King of the Remote Control Mountain 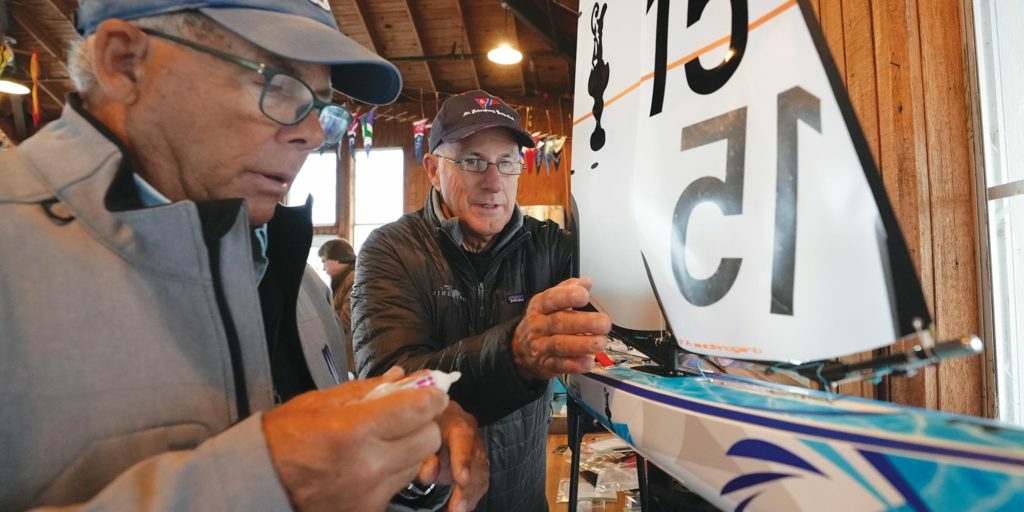 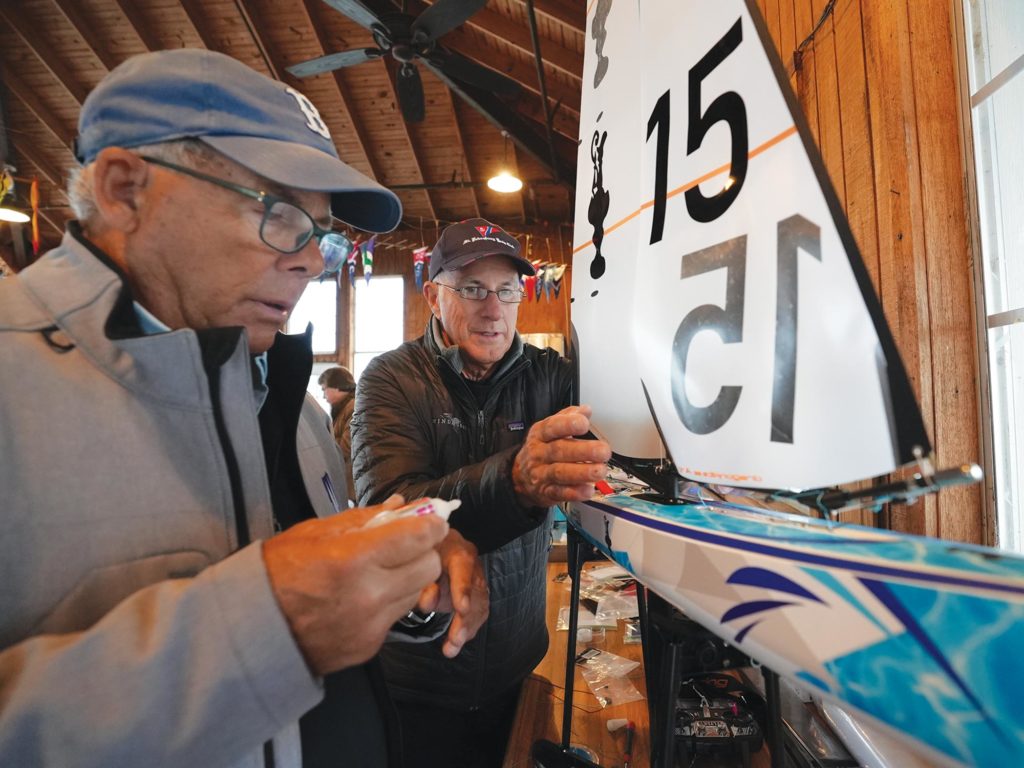 Tony Gonsalves’ thumbs caress the sail and rudder joysticks on his remote, making millimeter adjustments to his DragonFlite 95’s trim as he silently wills the 37-inch one-design through the leeward gate and toward the 12-foot-long finish line. When his boat’s blunt bow finally breaks the line, the Bajan radio sailing champion from Florida emerges from his flow state with a long and deep exhale.

“Sometimes, I forget to breathe,” he says with a grin, his competitive juices draining from his broad and tensed shoulders. After thumbing 21 races, he’s finally bagged one on account of a good start, a lucky shift, and a clean getaway in a breeze barely strong enough to rustle the leaves of a nearby oak.

These zephyr conditions, which would leave traditional sailboats at the dock, is nerve-racking stuff on Dallas’ White Rock Lake, where experts of various model-yacht classes have been invited to the inaugural American Model Yachting Association’s Champion of Champions Regatta. Their host is DragonFlite importer and racer Chuck LeMahieu, who supplied 17 complete boats with custom graphics and sails.

The vision of this championship, LeMahieu says, was to gather the greats of American radio sailing on one dock, put them in identical boats, and demonstrate to the world at large that remote-control racing is just as fun and competitive as traditional yachting. This is real racing among real sailors, he says, most of whom have or continue to race in bigger boats as well. 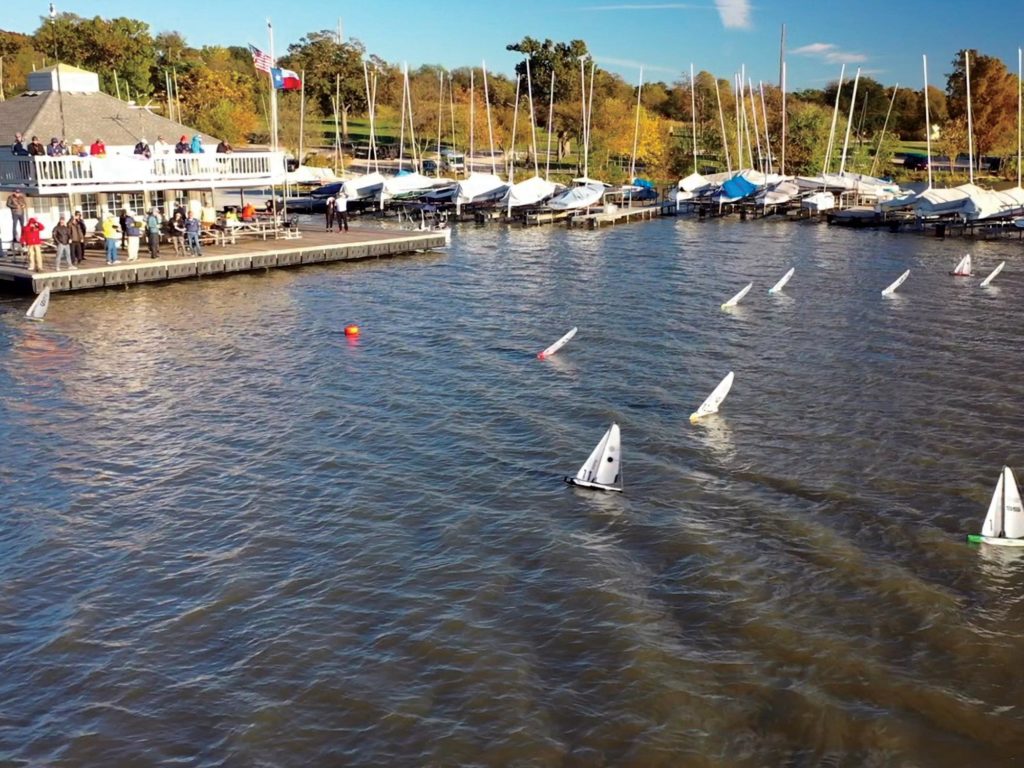 “The AMYA has talked about doing something like this for like 20 years, as far as I know,” LeMahieu says. “For it to finally be a reality is exciting—and a lot of work. What’s cool is that all of these guys also race DFs in addition to their other classes, which is pretty unique. Because of the one-design nature of the DF95, we’re finally able to do something like this.”

An experienced radio sailor knows how to build their own boat, regardless of size, and that’s what competitors must do as they trickle into the Corinthian Sailing Club, a one-room overwater facility surrounded by Flying Scots nestled in boat lifts. With handshakes, bro hugs and fist bumps, the champions greet each other as old friends do before diving into boat assembly, a harried pace of gluing, miniature knot-tying, fine-tuning rigging, and adjusting the digital end points on their controllers. These guys do in a few hours what would take a day or two of meticulous ­amateur building.

The Corinthian Sailing Club, says LeMahieu, who lives a Texan hour away, is an excellent venue for radio sailing. The club’s aluminum upper deck ­provides an elevated vantage point over the course—and more importantly, the starting line. The typical southerly allows them to set a course mere feet from the club, which means it takes 30 seconds or less to get from the dock to the starting line, allowing for last-minute tweaks. When it comes time to launch, some racers gently place their hull into the water, while others lob the boat and then sprint up the clubhouse’s external staircase to claim elbow room at the railing. 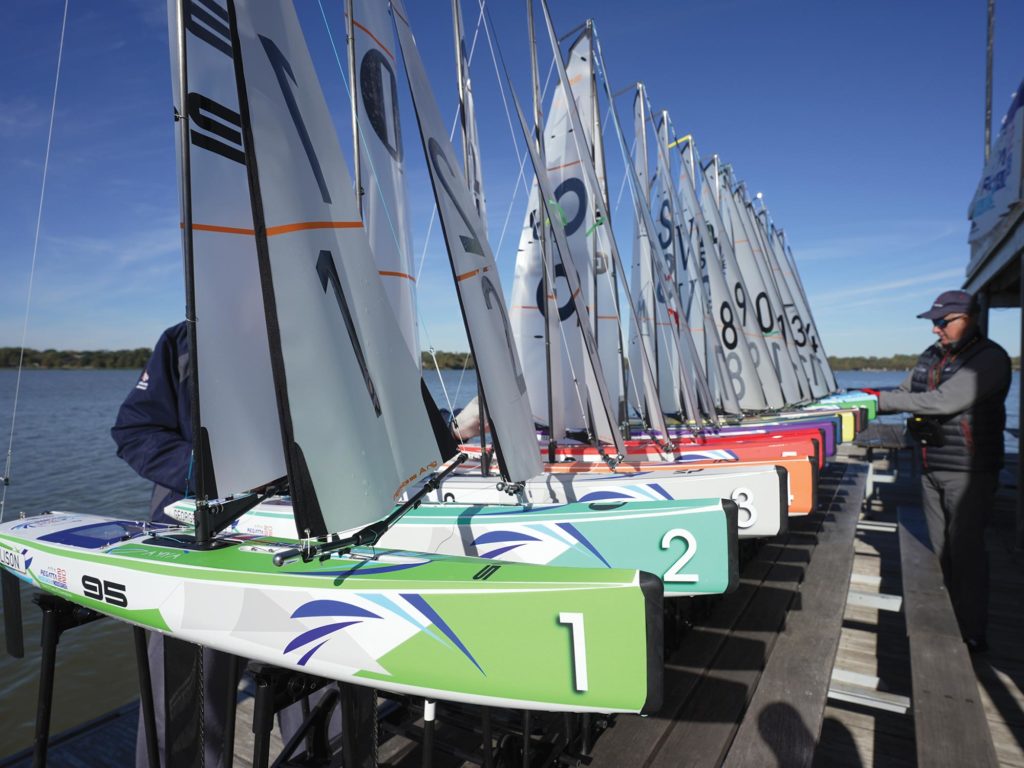 “On the clock in one ­minute!” shouts the young local pro before he presses a button on a starter/loudhailer that’s resting on a picnic bench next to the scorer’s clipboard. It’s the first morning of the regatta, and the frigid wind is gusting to 20 knots, well past the edge of A rig conditions. (LeMahieu ran out of time to build smaller B rigs.) Success in this wind strength is all about tacking and not pitch-poling downwind, says Steve Landau, who hails from Atlanta, and is a pre-event favorite on account of him being the DF65 national champion (a smaller version of the 95).

During the first of dozens of two-minute countdowns to come, the diminutive boats—each bearing graphics to represent the model-yacht class of which the skipper is champion—jockey for position, bobbing and weaving through each other. There are hails of port and starboard, of windward and leeward, and groans when rigs get locked or someone gets stuck head-to-wind. And just like any other sailboat race, one or two boats shoot forward from the scrum with full-speed starts. Those in the second and third rows scatter to the sides in search of lanes and clear air. Squint and you might just think you’re watching faraway footage of a keelboat regatta.

Just like any other sailboat race, one or two boats shoot forward from the scrum with full-speed starts. Those in the second and third rows scatter to the sides in search of lanes and clear air.

Once a race is underway, the dock gets eerily silent as the sailors keep sharp focus on their respective yachts, straining to see telltales from 100 feet away and judging crossing situations that are near misses measured in centimeters. The only sound is the aluminum floorboards creaking under the load of heavy feet shuffling back and forth to get a better vantage point at the railing. The silence is only occasionally broken by right-of-way hails, which reach a fevered pitch as boats pile into the weather mark on both laylines.

The tactics employed by these top-level sailors are all very calculated, and while there’s plenty of touch-and-go contact, it’s like any other sailboat race where the first boat around the offset and away from the fray gets launched, especially in the big breeze and steep 10-inch swells. Like any race, the downwind game is all about speed and clear air.

From dawn to dusk the race committee nets 21 races, a relentless pace even for these world-caliber model yachties. With so many scores, a handful of throw-outs will eventually redo the math, but the top pecking order is set, with the likes of Landau; Peter Feldman, a Soling One-Meter class champ; Mark Golison, a DF95 ace; and even Ken Read, the president of North Sails and two-time Rolex Yachtsman of the Year. He’s got the watchmaker’s royal crown insignia on his sail, and his boat looks just like the big red-and-black sneaker he once raced around the world. What the heck is Ken Read doing here in Texas anyway?

The not-so-secret is he’s a DF95 addict representing the Newport, Rhode Island, fleet that his other famous brother, Brad, started a few years ago during the pandemic. The two of them trade 1-2 on a weekly basis back home off the Sail Newport and New York YC docks all summer long and through the New England winter. Brad (who is supposed to be here as well, but COVID-19 kept him home) is one three celebrities LeMahieu invited, including Hall of Famer Ed Baird, who dabbles in DF95 racing with his sons on the canal behind the family home in St. Petersburg, Florida (aka “Club Ed”).

As talented as Baird may be, however, he’s fully aware he’s out of his league with these guys. On the opening day, he takes a more conservative approach to his starts by hovering outside the starboard end and swooping in late. When that doesn’t work, he tries the middle but keeps getting flushed, so he tries the leeward end with better results, but even that isn’t good enough to crack the top 10.

Only on the 21st and final race of the day does he get a top-five result: A keeper third to celebrate at the post-race gathering organized by LeMahieu at the American Airlines Arena, where the NHL’s Dallas Stars put up a pitiful performance. 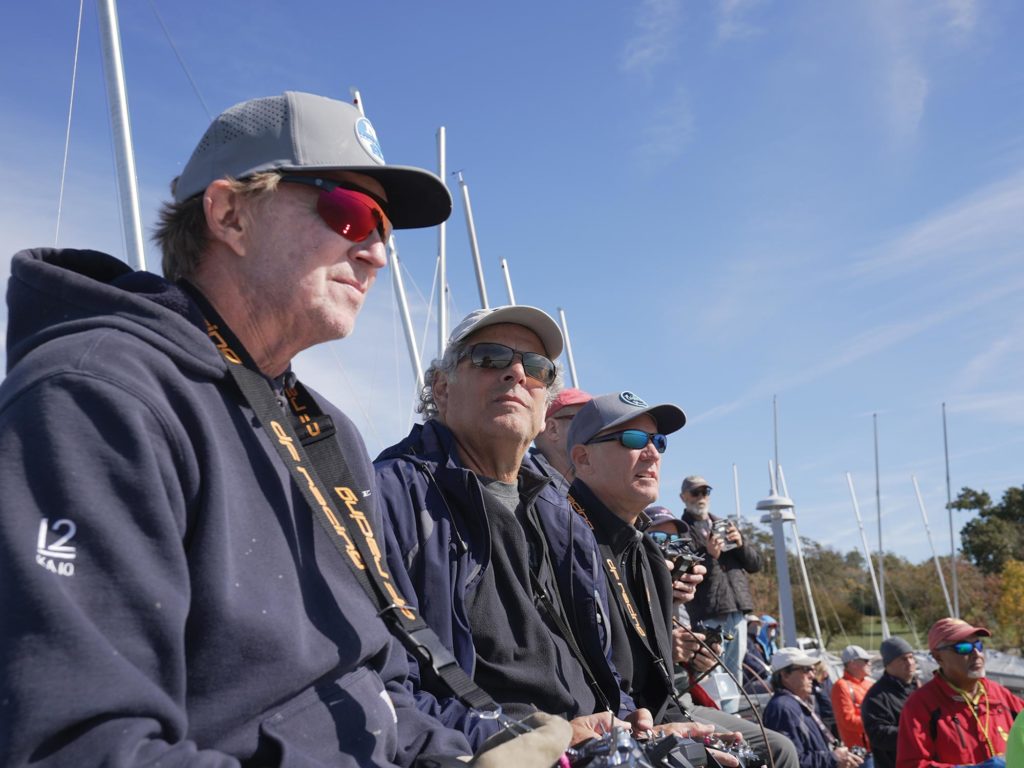 The first day’s big blow is a distant memory, however, when competitors arrive for the second day. An unfavorable wind direction forces the race ­committee to set a course on the far side of the docks, where competitors must stand shoulder-to-shoulder and try their best in the millpond conditions. Seven light-air races produce a few new faces into the winner’s circle: Gonsalves, Ron Stephanz and Brig North (multiple classes), Jack Ward (Micro Magic) and Bar Batzer (RC Laser), who closes the regatta with a nail-biter. But it’s Landau who offsets two poor finishes with a pair of race wins to be anointed the first-ever AMYA Champion of Champions. Feldman is second, and Read is third to complete the podium.

For good measure, the regatta concludes with an impromptu exhibition match race between Read and Baird. This one’s for bragging rights. Read cops a pre-start port/starboard penalty, allowing Baird to get away and around the weather mark first and down the run with a few boatlengths between them. Halfway up the second beat, however, they were back at each other with Read on the attack until they coast into a textbook midcourse dial-up.

In agonizingly slow motion, Baird is able to peel away first, but Read soon sneaks past with a better lay on the offset leg. Down the final run, the boats zig and zag, with Baird attacking from behind, skills he’d honed in the old days of the America’s Cup before there were foils. With one final smooth jibe, he connects with a random puff, scoots away, and leads into the finish.

The post King of the Remote Control Mountain appeared first on Sailing World.