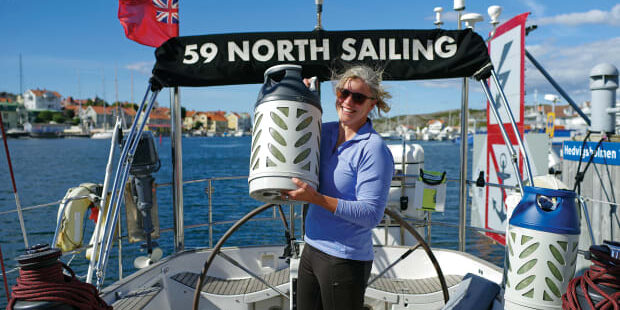 When I started the lithium project on our 65-foot Farr, Falken, Mia, and I were hell-bent on induction cooking. Cool factor, baby, plus it would rid us of the hassle of refilling propane tanks in exotic ports (and make galley cleanup easier with a flat, glass cooking surface).

Bruce Schwab of Ocean Planet Energy and I did a basic analysis of the boat’s energy needs, and Bruce specced out a Lithionics system like this:

In summary, that is a lot of juice, on the bank size and the recharge size. In fact, it’s plenty of juice to go with induction cooking. But in reality, all of that giant battery bank capacity is going to cooking, which you can also do with propane.

So, when I reflected on the subject, the question wasn’t can we do the induction (which clearly we can), but should we? Set aside the risk factors of propane versus electricity, the “green” fallacy, and the hassle factor of refilling propane, and look solely at the factors that make life at sea more enjoyable—namely, the silence under sail.

Falken is not our 34-foot Norlin, Spica. She’ll be set up much like our Swan 48, Isbjørn, is now—giant alternators on the main engine providing the diesel-fueled charging system, combined with a Watt & Sea hydrogenerator to provide amps under sail. The installed electrical systems will be kept as simple as possible, but given that we sail with 10 people, our largest loads inevitably will be on fridge/freezers and the watermaker, two unavoidable energy hogs.

If we switch to propane cooking, a very pleasing thing happens: At sea, with the hydro humming, we’ll never need to run the engine to charge, so long as we’re sailing. We have a track record here too; on Isbjørn we rarely ran the engine unless the wind was super light and we were going super slow, or we were becalmed and motoring anyway (and therefore charging simply as a byproduct of motoring to make way).

At anchor, our time to recharge goes from daily with induction, to almost weekly with propane. All that extra battery capacity, instead of going to cooking, can go towards extending the time between recharges.

Read that again: With a simple switch to propane cooking, we can charge weekly for 2.5 hours instead of daily for 2.5 hours. Carbon footprint aside, the quality of life on a boat at anchor running the engine 2.5 hours per week versus 2.5 hours per day is a game changer. Suddenly, induction doesn’t look so sexy.

The foundation of any electrical system is figuring out two things: the average electrical loads at sea and at anchor over 24 hours, and the highest peak load the system might encounter (if everything was turned on at once).

Nigel Calder and his colleague, Jan C. Athenstädt, have developed a spreadsheet and an online course that walks you through exactly how to do this in great detail, taking into account voltage drop across circuits, battery efficiency, charge efficiency, load cycles, and a whole host of other variables to make this exercise as accurate (and realistic) as possible. I highly encourage you to go to boathowto.com, sign up for the courses, and go through the process.

The spreadsheet they designed consists of the user inputting a host of variables, from the battery type (AGM, gel, lithium, etc.), to the various charging sources and their ratings, to every single DC and AC load that the boat has installed. The spreadsheet then asks the user to estimate the duty cycle while at anchor and underway, and has two columns, one for normal use and another for worst-case.

Duty cycle refers to how often the given appliance will actually draw its rated current. A fridge compressor is a great example. When on, it’ll draw a certain amount of amps, but it’s not on constantly in a well-insulated, well-functioning system. Rather it cycles on and off over time to keep the fridge at a consistent temperature. That’s duty cycle.

Once you’ve gone through the exercise of modeling the various loads, the spreadsheet spits out results, organized into a few tables:

• Recharge requirements, i.e., how much capacity is used in 24 hours and how much you need to put back into the system to get back to 100%;

• Time to recharge that used-up capacity based on the charging parameters you set up.

I took the spreadsheet a step further. Using Falken as an example, we know the total battery capacity, and we’re trying to compare induction and propane to see how often we’d have to recharge and how long it would take to recharge.

Put another way, I don’t want to just recharge what was used in a given 24-hour period; that assumes charging every day is acceptable. I want to know how long it’ll take for me to run the batteries down to dead (and recall, each chemistry has a different definition of dead), and furthermore, once dead, how long it’ll take me to recharge them to their usable capacity given the charging setup we’ve selected.

Let’s look at each scenario.

Underway, the normal electrical draw should total ~12,000 watts per day (for my brain, that’s ~1,000 aH at 12V). That’s including all of the boat’s navigational systems, fridges, freezer, autopilot (set to light usage since we hand steer a lot), watermaker, lights, etc. Of that 660 aH, a whopping 380 are for cooking on the induction stove.

Since I’m less interested in what it’ll take to recoup that in a daily recharging cycle, I’ve made another table that shows how long my batteries can sustain that usage before they need to be recharged. Based on our 22kW of rated capacity, we’re losing about net 20% capacity per day, meaning we’d have to charge offshore about once every three to four days (given that we can run lithium down to 20-30%). And given the huge alternators and lithium’s low internal resistance, it would take about 2.5 hours to recoup that 80% of usable capacity by running the engine.

So, that’s totally doable with induction and our setup at sea.

At anchor, it’s not as happy a story. Without the hydro continuously pumping in free amps, our total usage will equal our net usage. So, while the total usage is less, the net usage soars to 7,396 watts (616 amp-hours, almost double the net at sea). This includes accounting for sailing instruments, nav equipment, lights, autopilot, etc. not being run while sitting still. In that case, most of the energy is lost to cooking. At anchor, we’d lose about a net of 32% rated capacity daily, meaning we’d have to run the engine every second or third day. Still better than most lead-acid-based cruising boats with little solar/wind renewables.

When framed through the lens of time between charges, propane suddenly looks pretty attractive.

Let’s look at the at-sea table. With everything else being equal and simply removing the induction cooking load from the electrical system, our daily net usage goes from -4,424 watts to +588 watts, just above the energy-independent threshold with the hydrogenerator humming. So we’re getting the same amount of free energy through the hydro (7,800 watts), but we’re using 5,000 fewer watts without cooking on induction.

What does that mean for charging? At sea, it means we never have to charge the batteries. Never start the engine. Silence under sail—how voyaging is meant to be, to my mind.

At anchor, we don’t have the Watt & Sea to rely on, but we’re still using way less energy. Our net daily usage when anchored drops from -7,996 watts to -3,783 watts, and our time-between-charges interval increases from nearly daily to basically once every five to seven days. Quality of life aboard increase? Absolutely.

After all that, we’re sticking with propane.

“At the end of the day, I don’t think any of this matters much, as it is lifestyle issues that will trump all others,” Nigel wrote to me when we were debating the subject on email. “So if you can get sufficient renewable energy when underway, go electric, and if you can’t, go propane so as to minimize the engine run hours. However much of a hassle it is to refill propane cylinders, this is still more convenient than running the engine at anchor.”

Basing our decision on lifestyle factors alone and our desire to minimize engine run time above all else, we’ve inadvertently backed into good seamanship by decoupling our cooking system from our electrical system.

When we talk about electrical systems, we are talking about inherently complex systems. With complex systems, you introduce many different variables, and the failure of any one of those variables can have unintended consequences downstream. This isn’t good or bad, it just is, and we need to be aware of it.

This is an apt segue to the drop-in versus Lithionics debate. I like to think of the external battery monitoring system (BMS) as comparable to a propane solenoid. A failure in an external BMS lets me bypass the system into safe mode and still get home with a working electrical system. A failure with a drop-in, internal BMS means lights out, literally.

Lead-acid systems don’t need a BMS at all (though they are neither fail-safe nor without their own risks), but they are one layer of complexity simpler than a lithium system. I would argue that lithium’s complexity is outweighed by the benefits in added useable capacity and shorter recharge times, but my point is that you need to be aware of and think about these things for yourself.

Seamanship is entirely about risk management, which you’ve heard me say and write ad infinitum. And risk management is about weighing potential threats against your vulnerability to those threats and evaluating your tolerance to the subsequent risk.