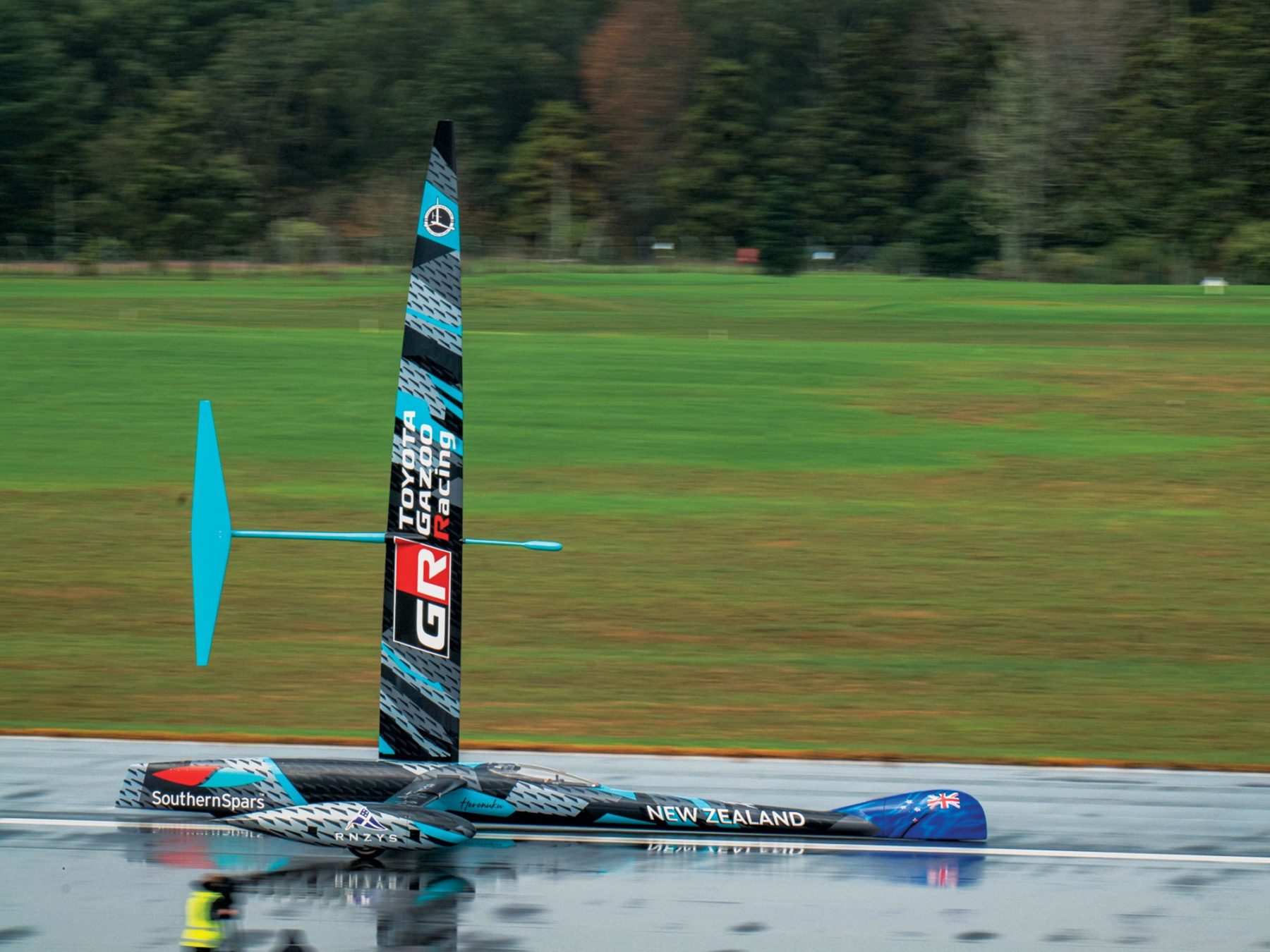 This is a story about a lake and a boy who loved the lake and how, when the lake disappeared, the boy made do. And how that leads to ­something big.

The boy was Glenn Ashby, growing up in the interior of Australia. Lake Eppalock, built as a reservoir, was his playground each year until it was annually drained to satisfy thirsty crops. What’s a sailor boy to do? Build a landsailer, of course.

Quietly, Ashby grew up improving his rides, year by year, and harboring a dream, never daring to really count on a day when he would, no fooling, convince his teammates in the America’s Cup defenders camp, Emirates Team New Zealand, to focus their might, main, expertise and dollars on something not the America’s Cup. While he was banging away in the garage, would mama Ashby ever have imagined an America’s Cup team designing and building a landsailer for her son to drive and attempt to beat 126.2 mph, the sailing speed record on land?

Think about it. The small-town kid from a Jet Ski lake made himself into a multitime world champion in catamarans, an Olympic medalist, and a critical player in multiple America’s Cup victories. Then came downtime between matches for the Cup, and today you can get a self-conscious crackup out of Ashby by suggesting that everything to this point was all about maneuvering to get Team New Zealand right where he wanted them. It might even be a little bit true.

Ashby says: “I began at age 9 or 10, reusing broken masts and cut-down windsurfing sails. Building landsailers was a great way to learn about balance and grip, and then to see how much faster you could go on land than on water—fast enough to scare yourself, but going really fast in a wind-powered craft is a childhood fascination that stayed with me. Before the last Cup, I began putting feelers out to see if the guys would be interested. They were. Fortunately, Grant Dalton is a speed freak who is always up for a challenge.”

So, late last summer, the most sophisticated landsailer ever built arrived ready for the salt surface of Lake Gairdner in South Australia. Horonuku—translated as “gliding swiftly over land”—represents all the engineering savvy Team New Zealand could muster, and we know that’s a far cry from repurposing broken masts and cut-down windsurfer sails. Their best computer models say the craft is capable of record-­breaking speeds. But having that potential is only step one.

As explained by current record holder Richard Jenkins: “I’m often asked if I would try to break the record again. My answer is that if I had unlimited funding and a new vehicle, it might take five years or more. You have to be in the right place at the right time, with certified observers, which is hard to put together. You then have to be technically perfect at just the right moment because the wind might come suddenly. It takes a great deal of time and experience. I have better things to do.”

Jenkins these days is more than busy running his ­autonomous-research vessel company, Saildrone, but he and Ashby are on close talking terms. There are no secrets here. Speed records build a fraternity, a very small fraternity. Jenkins began his quest during his college years in the UK, when he was handed someone’s broken dream: an abandoned record-attempt vehicle. That much came easy. Multiple vehicles and “only” 10 years later, in 2009, he had his record.

Glenn Ashby with one of his early home-built creations. Emirates Team New Zealand

In 2022, on the runways of an air base in New Zealand—before shipping to Lake Gairdner—early test runs of Horonuku identified a need for structural changes, and those were easily accomplished. Alternate configurations had been designed in from the get-go by Team New Zealand’s engineers, the background heroes of this story. It wasn’t challenging to take 3 feet out of the rear of the craft, Ashby says, and the effect “was like moving a daggerboard farther aft in a boat, bringing the center of mass and the center of lateral resistance closer together. Now the rear wheels take more load and the front wheel has less. It feels totally different, and I like it.”

The team anticipates 1.5 to 1.7 tons of side force, which accounts for the one-sided wide stance. “The surface of a dry lake can change by the day or even by the hour,” Ashby says. “Any reduction in rolling resistance gives you more speed but less grip. We may have to try a lot of tire combinations, pressures, ­camber and ­suspension settings, and develop a package for each condition.”

To trim the tail plane and put power into the wing, Ashby pumps a foot pedal to build hydraulic pressure. Stored power is not allowed. Alongside the steering wheel is a paddle shift he can touch to depower the wing. The system works. A record run can be ratified only on a natural surface, not tarmac, but last summer’s testing on the air-base runway readied the team for their mission in the Australian outback. On the runway, Ashby topped out at 92 mph, but he was seeing a window of only about 10 seconds at speed, per run, before he had to stand on the brakes. The dry lake will afford a wide-open go.

“Maybe we’ll disconnect the brakes,” Ashby says to some gentle goading. “Dude, the Iron Duck didn’t have no brakes.” 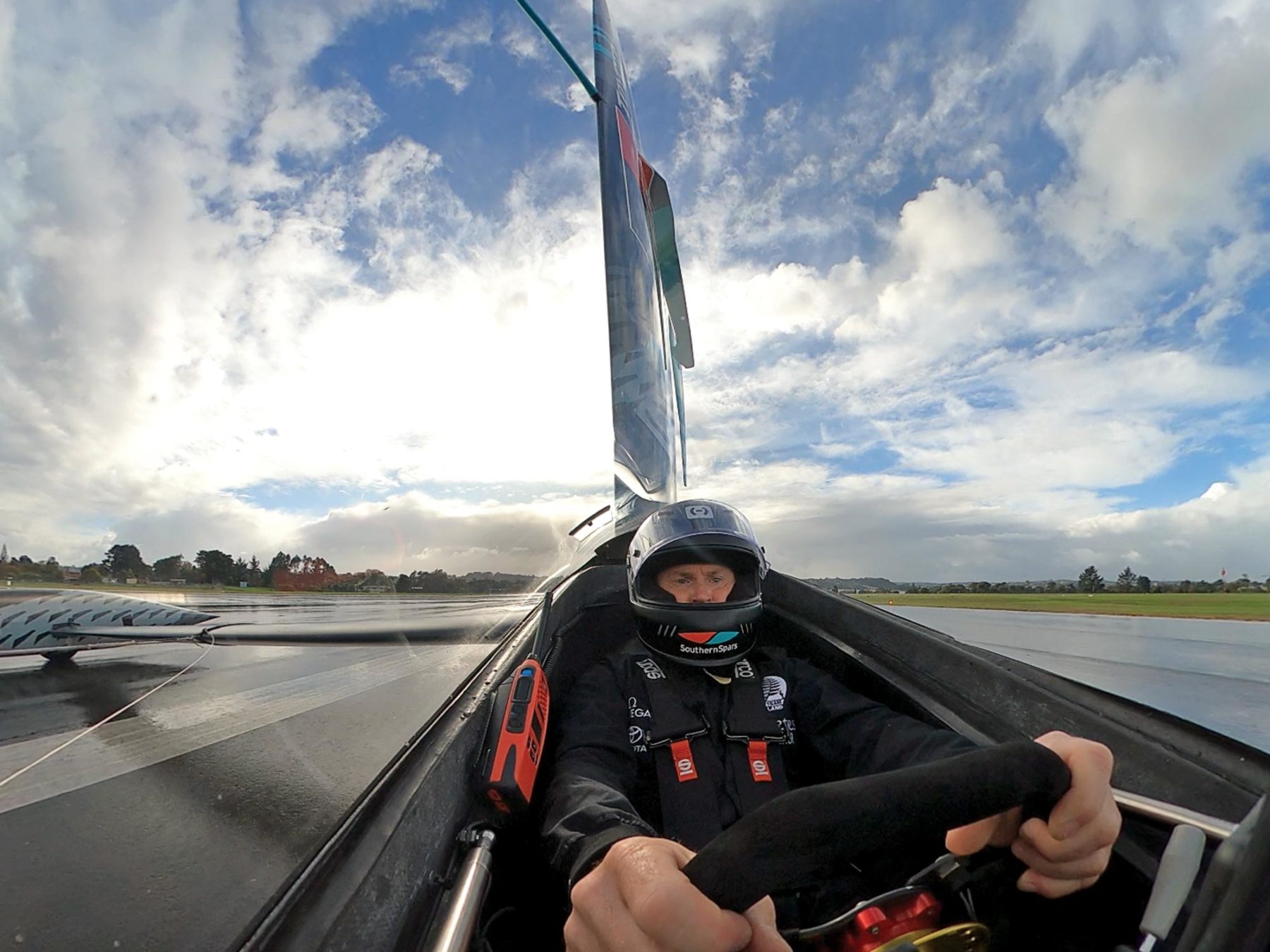 To break the current record, the minimum target for Ashby to exceed for a world-record run is 127 mph. Emirates Team New Zealand

And about that. The frankly agricultural Iron Duck—a replacement for a broken, short-lived Wood Duck—held the record from 1999 to 2009 at 116.7 mph. There was no carbon cockpit, no CAD, just a backyard fiberglass design of a streamlined cowling to cover go-kart seating and some old Volvo parts. The long steel frame showed rust speckles. A forward wheel offset to leeward countered the tipping force. Add copious quantities of duct tape, and the rest was about two buddies, Bob Dill and Bob Schumacher, spending years trying and trying again, and succeeding and growing a legend that endures. Eventually, after one last trip west from Vermont for one more attempt to up the number from 116.7, Dill sold Iron Duck to a junkyard on the tow home for $31.15. When Jenkins came along in his more aerodynamic, more engineered machines with the dramatically offset main wheel (copied for Horonuku), Dill pitched in, helping him at every turn as a fellow on-my-own-dime kind of guy. That is, helping Jenkins take away Iron Duck’s own record. Jenkins says, “He helped me tremendously, which includes two trips to Australia at his own expense.” If justice is served, Dill will one day be the first land sailor inducted into the National Sailing Hall of Fame. You read it here. And we might as well add that Jenkins thinks Ashby and company could be facing more obstacles than they know. He got skunked at Lake Gairdner.

But getting back to brakes, Horonuku shouldn’t need them on the expanse of Lake Gairdner. What it needs is distance to build speed. The craft is heavy to keep it from lifting off and landing badly, and the wing is smaller than the sail on a Finn dinghy. The speed build is necessarily slow, but the payoff for a small wing comes in lower resistance at high speeds.

Testing on tarmac, Ashby says, “I was sitting in an uninsulated carbon tunnel, so the ride was bumpy, noisy.”

Now comes the lake experience. “At about 50 kph (30 mph), the wing hooks up. You feel the flow attaching, and once you get to the 90 to 100 kph range, the power really comes on. You feel the acceleration.”

September and October, statistically, are the windiest time in South Australia, but the team is familiar with the wisdom of the saying, “No matter where you go in the world, it’s never like this.” That said, they are hoping for 25 knots or better and estimating that it might take a 4-mile run for our boy, a mature 46 on September 1, to pass 126.2 mph and become the fastest sailor in the world.