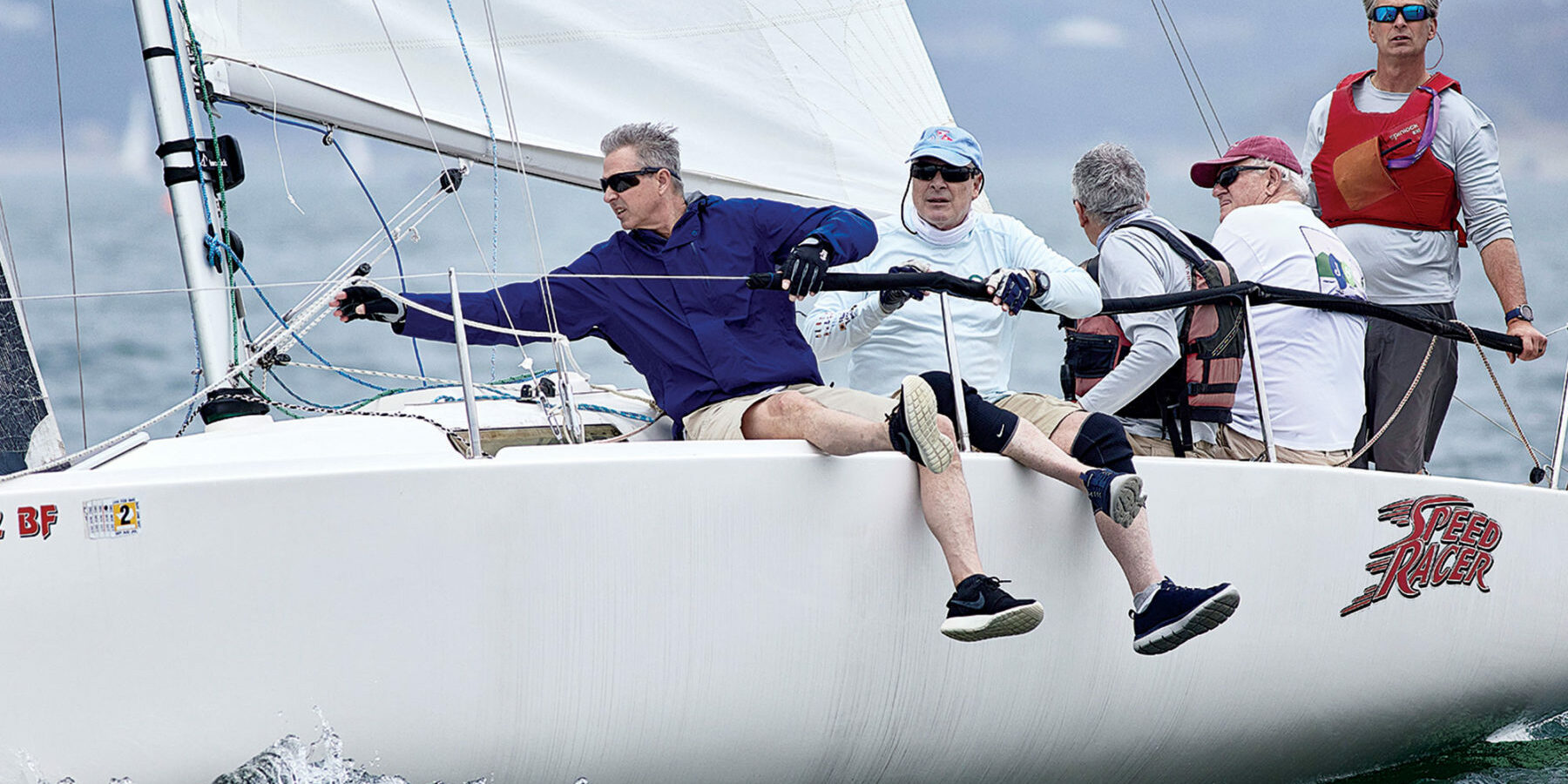 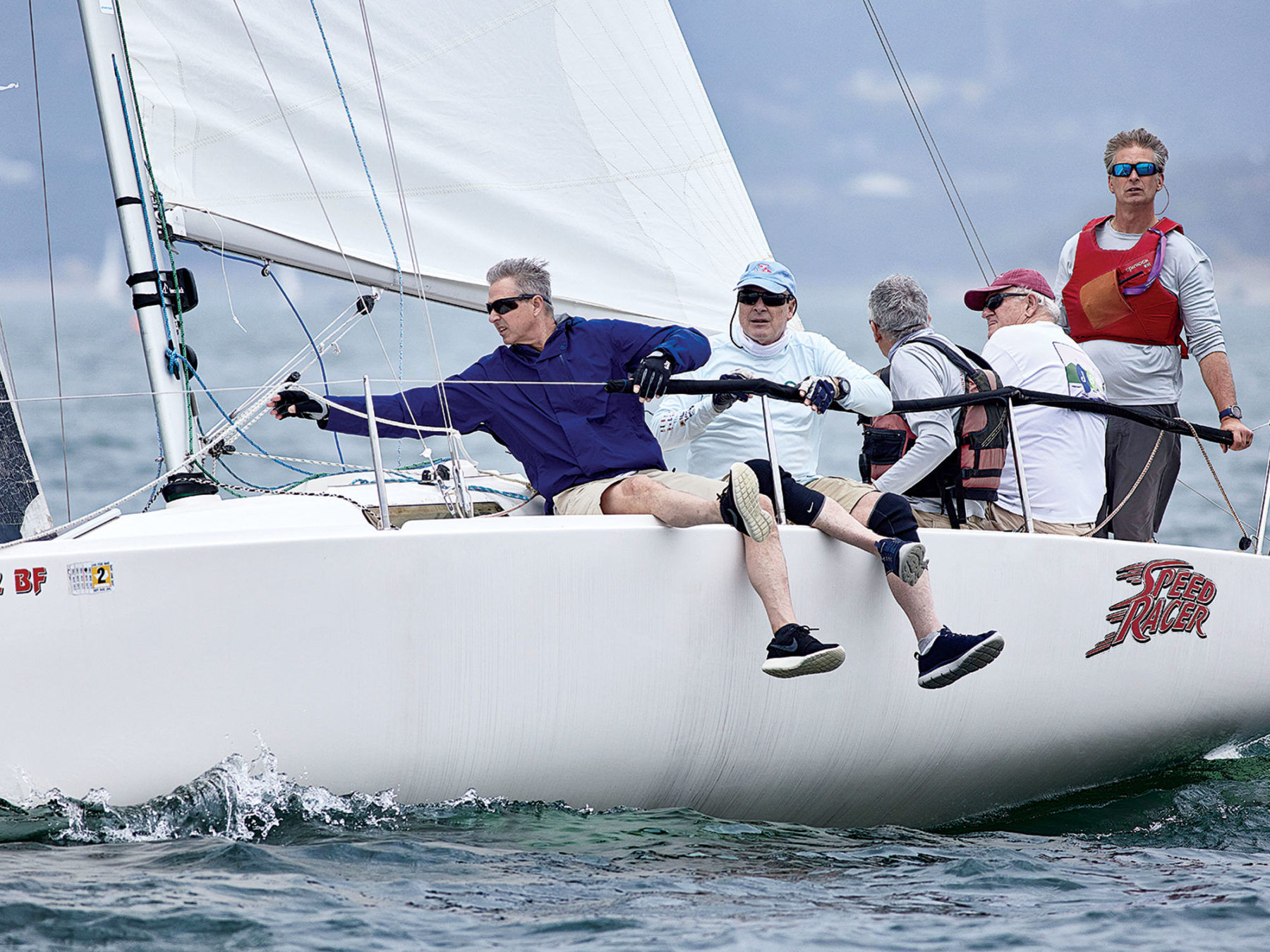 It’s a Monday morning in late April, and students are pouring into Austin YC’s one-room ­schoolhouse, packed with banquet tables and folding chairs to seat about 100 sailors and coaches participating in the first longhorn edition of North U’s Performance Race Week, the immersive boot camp for keen amateur sailors.

Bill Gladstone, the wizard of this whole operation, assembles his coaches for the first morning brief. I’m one of them, and we’ll each be paired with our charges in a few minutes, speed-dating style. For the 54 students, this week is all about getting better at sailboat racing. Attendees get Gladstone’s textbooks on boatspeed and tactics, as well as five days of 9-to-5 instruction, a season’s worth of starts, and a bunch of new and like-minded friends. They will be drilled, scolded, counseled, humiliated and hopefully entertained. There will be beer and margaritas, and a Tex-Mex barbecue for sure.

My charges are four fellas from New Hampshire’s Lake Winnipesaukee J/80 fleet. Casey Nickerson is the septuagenarian skipper and owner of the team’s J/80, Argo III. Fellow Winnipesaukeans Steve Nix and Lee Woodworth have been with Argo III for about 10 years. Their fourth and newest mate is 74-year-old trimmer Gary Uhring.

The last time this foursome took a run at the J/80 North American Championship was in 2018. The big waves and blustery sou’westers of Cape Cod’s Buzzards Bay were a handful for the flat-water ­sailors. They finished near the bottom half of the fleet, but they have their sights on the J/80 North Americans and World Championship in Newport, Rhode Island, in the fall. The ice is about to break on Winnipesaukee, so it’s time to fast-track to the next level.

Once assembled in the cockpit for our first team meeting, I flip my notepad to the week’s priority list: good starts, good turns and strong finishes. Their collective goal is to get the heck out of Winnipesaukee’s ­midfleet—and, what the heck, a top finish at the Worlds. To get there, we agree to focus on boathandling and reassessing their tactical chain of command.

For as long as they’ve been together, I’m told, Nickerson has steered, trimmed his own mainsail and called tactics, which is a recipe for disaster in big-fleet J/80 racing. So, we agree to divide the boat in such a way that Woodworth is in charge of everything that happens from the companionway forward. Nix is reassigned as timekeeper, tactician and offside spinnaker trimmer. Uhring will remain the primary trimmer. Nickerson will leave the tactics to Nix and keep his attention on the horizon, the boat’s balance, the telltales, and the big white sail in the sky.

Once clear of the drought-shrunken harbor, we point our bow into a light southerly, the lake’s prevailing wind, and hoist the main on a beautifully hot Texas spring day. Like every first school day, there’s a mixture of anxiety, new expectations, and the fear of so many unknowns, but we get right into our boathandling drills, first working on tacks, which means changing Uhring’s preference to trim from the leeward winch. For him, it’s a crash course in cross-sheeting, and I can see his ­frustration build whenever the cast-off sheet tail gets pulled into the new winch.

Nickerson is smooth and fluid with his turns, but he has a bad habit of abandoning his tiller during the tack and always one-handing the mainsheet while looking down. For Nix and Woodworth, the morning’s lesson is weight movement. Before we set the spinnaker, we discuss the orchestration of getting it up, down and around the headstay. All good there. Their first few jibes are good, but the exit needs improvement.

Up and down the lake we go, tack to tack and jibe to jibe until it’s time for Gladstone’s lunch and learn. With a whiteboard, big-screen TV, and magnetic boats to demonstrate the nuances of sail trim and windshifts, Gladstone dives straight into his curriculum, allowing for no dumb questions. Then it’s right back out on the water, working on our boat­handling until the sun goes down. After this first day, I’m chuffed with my charges and already looking forward to the regatta that comes at week’s end.

The second day dawns bright and dry again, and we’re right back into the drills: more boatspeed, more handling, and the introduction of late-main jibes, which is a eureka move for the team—they knock them off as if they’ve been doing them forever. Quick learners, they are. For the afternoon session, Gladstone introduces starting drills, and this is where his promise comes true; there are three starts for every drill, and thanks to the insane shifting winds of Lake Travis, we get to try every possible approach. The Argonauts focus on their respective jobs: Woodworth on traffic, Nix on calling time and audibling his starting strategy, Uhring on trimming for full speed, and Nickerson on sticking to the line and driving into traffic. Most starts are good, and one pin-end glory start demonstrates the importance of paying attention to windshifts inside the final minute.

On hump day, we’re blown out on account of 40-knot gusts, but Gladstone keeps the information flowing in the classroom and breakout tuning sessions on the dock. The wind is still cranking the following morning, but it’s time to build some big-breeze sailing chops. The Argonauts have no problems handling the conditions; they mostly nail their starts, and I can see their confidence blossoming. They’re almost ready for race day.

In a moderate and shifty breeze, the Winnipesaukeans put up three great results and even win one, which has them sitting third overall going into the lunch break. “Just keep doing what you’re doing,” I tell them. “Remember, good starts, turns and finishes.”

The first of our post-lunch races is going just fine as we round the windward mark and set up for a jibe. But over my shoulder, I see a bizarrely shaped puff splash down. Before I can warn them, we’ve crashed auto-jibed, bodies scrambling for the high side. In the chaos, the spinnaker becomes a tangled mess and is hastily doused as a twisted wad of sail and tangled sheets. Spooked, we choose not to set the spinnaker again and finish the leg under the jib alone.

Woodworth quickly reruns and checks the gear in the rushed minutes before the next start. I confirm all looks right on deck, but lo and behold, it’s not right at the top of the rig on the next set. Before we know it, we’re chicken-winged again in the final race. It’s amazing how one small mistake can manifest itself in so many ways.

Poof—the morning’s podium dreams vanish, and I know we’ve tumbled down the score sheet. I apologize for having failed them with what will likely be another mid-fleet finish, but they don’t join my pity party. The score doesn’t matter at all, they remind me, because the real result is the experience we’ve had making mistakes together, the many takeaways and, most importantly, discovering new ways of doing things. That’s the beauty of Performance Race Week and of our sport itself—the learning never stops, as long as we commit to it holistically. And that goes for the coach too.