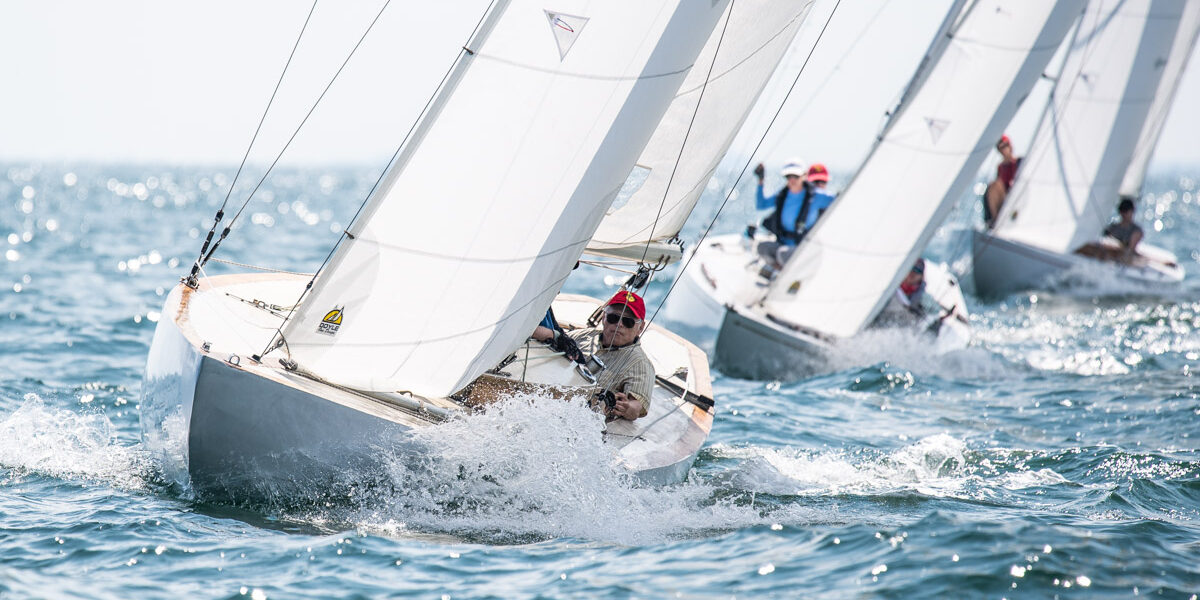 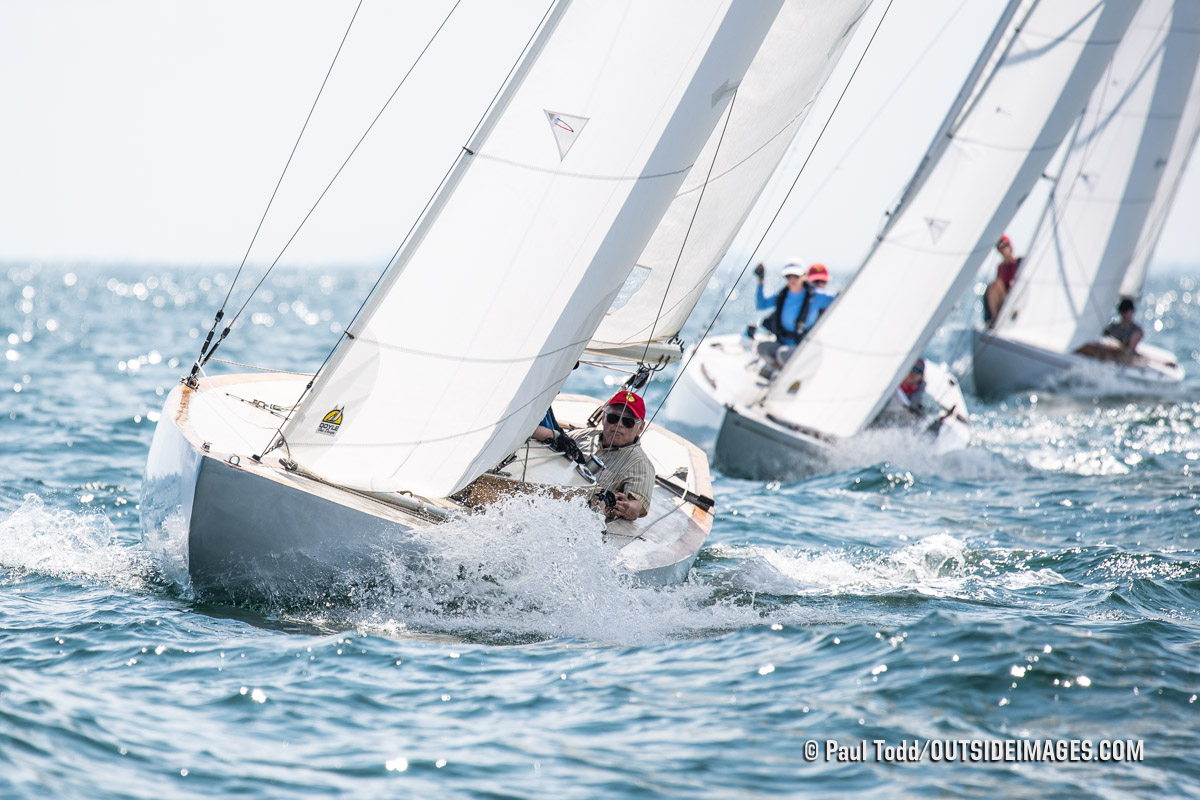 The IOD fleet in Marblehead produces close racing. year after year, and with nine boats set to race at the upcoming Helly Hansen Sailing World Regatta at Marblehead Race Week, the bullseye is squarely on the sail of 2021 overall winner—Bill Widnall’s Javelin. Paul Todd/Outside Images

It’s late July in Marblehead, Massachusetts, and the deep-harbor mooring field is packed from shore to shore with boats and teams preparing for the biggest regatta of the summer: the Helly Hansen Sailing World Regatta Series at Marblehead Race Week. This annual Race Week, established in 1889, has a long-held tradition of stiff competition among local sailors, and many of these rivalries will continue this weekend when nearly 150 teams take to the waters east of Marblehead Neck.

“This regatta is the centerpiece of our season,” says Kim Pandapas, the defending champion of the Rhodes 19 class. “It’s the one that everyone wants to win, and as a result, everyone brings their A-Game. It’s really hard to come out of there with a victory.”

What makes it especially challenging for Pandapas and his wife Christina is the high level of experience in his Rhodes 19 division, which is 25-deep and full of teams that have spent decades mastering the deceptively simple boat. “A bunch of teams are sailing really well right now,” Pandapas says, singling out his rivals Peter Frisch and Seamus Hourihan. “They won our East Coast Championship [in nearby Manchester] in June and they didn’t just win it, they dominated it.”

This pair, Pandapas says, has been sailing together for eight years and “are sailing really fast and sailing really smart.” But there’s Nat Taylor and his father Jim, who got a late start to the season and have been dominant in the local races. “They too are going really fast,” Pandapas says. “They’re late, but they’ve arrived with their mid-season form and we will not count them out, for sure.” 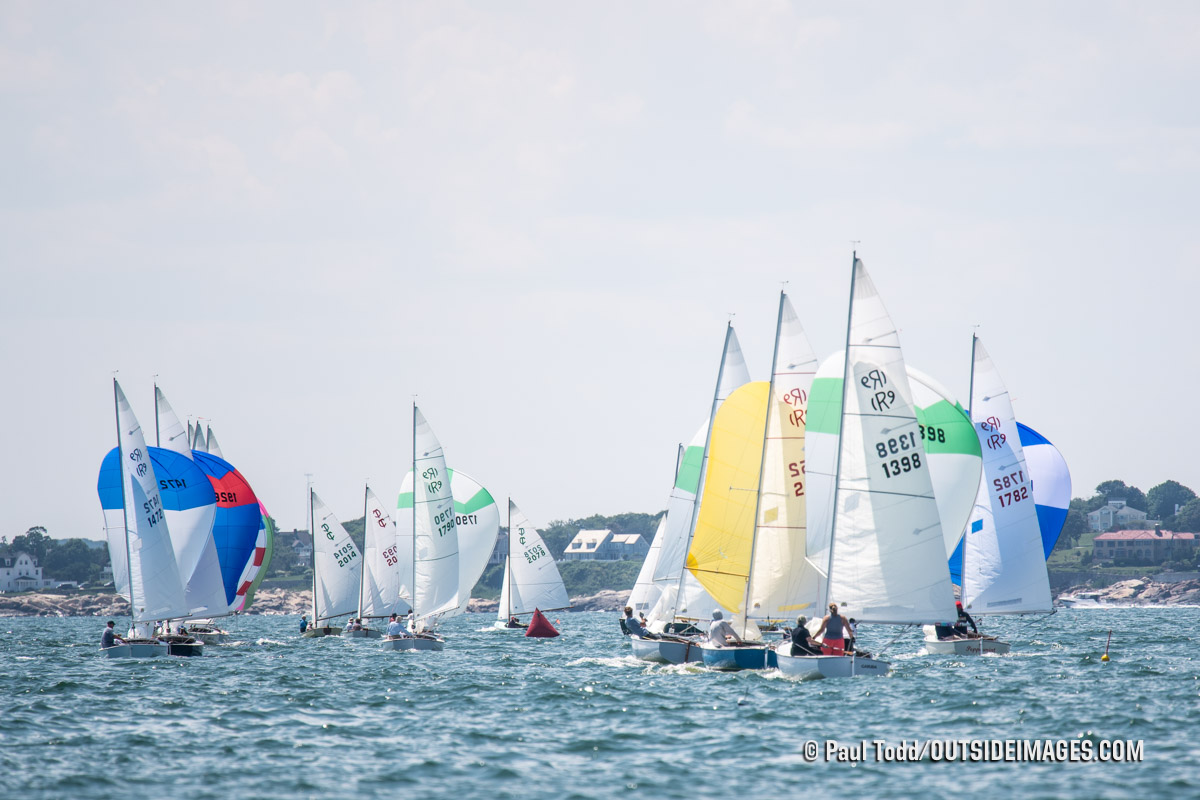 The Rhodes 19 class at Helly Hansen Sailing World Regatta in Marblehead races on the inside course where tidal currents and wind shifts keep teams on their toes. Paul Todd/Outside Images

Pandapas and his wife have a combined lighter weight than many other teams and they prefer lighter winds, so they may be hopeful the weekend’s forecast of sun and 10-knot breezes holds true. But even a favorable forecast isn’t enough to put him at ease. “This fleet has always been tough,” he says. “There are two ways of winning a regatta: one is to be the last man standing and the other is to just go out and take it. Race Week is different because it’s always been more of a war of attrition. I expect this to be the case, and like last year, it will come down to the last race. It’s four days and people start to get tired and it’s impossible not to shoot yourself in the foot once.”

Local professional sailor, Tomas Hornos, competing in the 13-boat Etchells fleet, shares a similar sentiment in that one key factor is always the weather. “No two days are ever the same,” he says. “That’s what’s unique about Marblehead. It’s an open-ocean venue, so we’re looking at more long-range wind patterns—what the trend will be throughout the day. What’s important is to have a firm understanding of what the likelihood of the wind will be and look for the trend in the forecast models.”

As a tip to visiting teams, of which there are plenty in the regatta, Hornos says there’s typically more wind further from shore, particularly in the morning races, but keep a sharp eye to the right (near-shore) later in the day. The current is a significant factor as well, he adds. “People have the hardest time trying to figure it out, but it’s pretty simple in reality: there is a lot of water moving from Boston and Gloucester, so there is no tidal effect really—it’s just always ripping.” 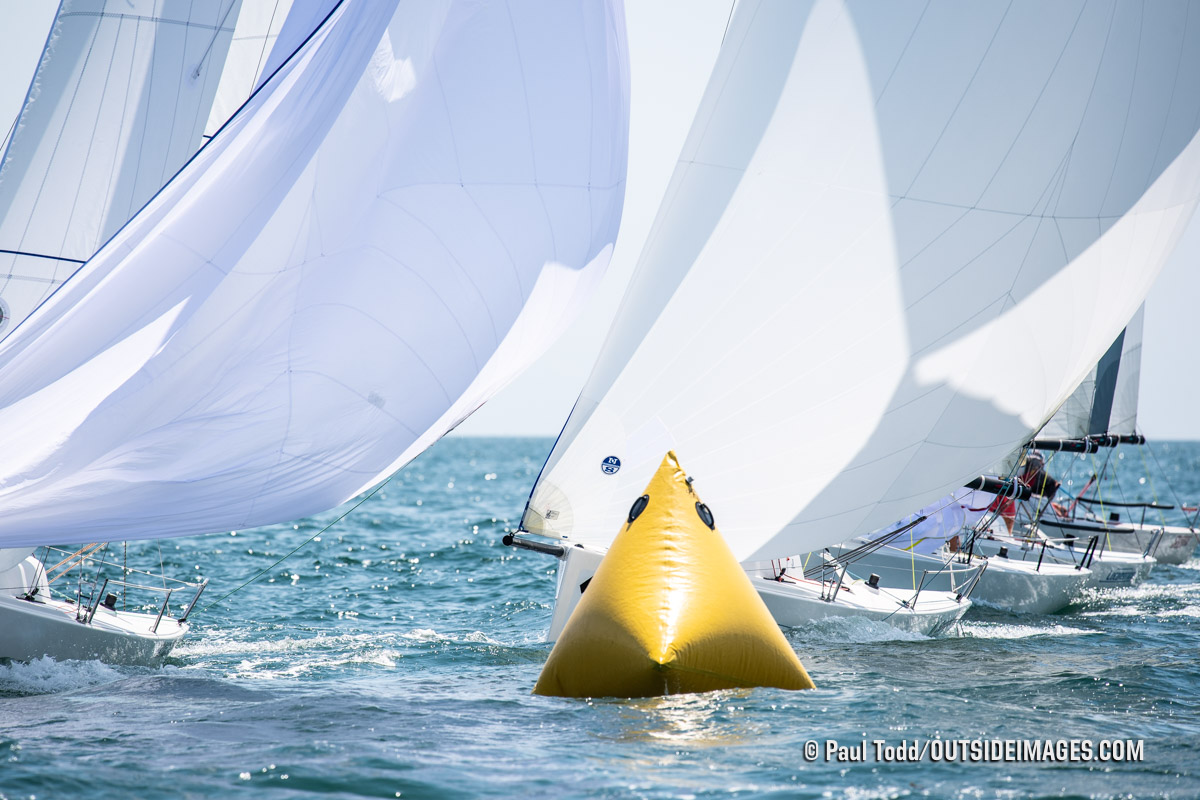 With a world championship berth on the line at the 2022 Helly Hansen Sailing World Regatta in Marblehead, the top J/70s in the country have arrived early to train in the venue, giving a hint of the competitive racing to come. Paul Todd/Outside Images

The Etchells fleet will be packed with top locals, as well as a few top-level teams that have been training all winter in Florida and will compete at the Helly Hansen Sailing World Regatta for a coveted berth at the upcoming Etchells World Championship in England in September. The same is true for the regatta’s J/70 fleet, in which 31 teams will be vying for a slot at the class’s Worlds in Monaco in October. As has become the norm with J/70 class racing, the fleet is deep with professional teams—only eight current teams currently qualify as amateur (Corinthian) in what will serve as the J/70 New England Championship as well.

While the J/70s have pulled in a large national contingent, Marblehead’s Town Class continues to be the fastest growing one-design fleet in the area. Each year, the class grows by one thanks to local shipwright and stalwart Bart Snow who searches for derelict Towns (or those in need of some basic TLC), fixes them up and puts them back into action. With the Marblehead mooring waiting list extending for decades, the Town Class moorings in the far shallows of the harbor allow sailors new and old to get in on the weekend racing action.

“It’s amazing that the class continues to grow one by one,” says Berit Solstad, Helly Hansen Sailing World Regatta class champion from 2021, “a lot of this is because of Bart and all the things that people are doing to get newer sailors into the class, running clinics and getting everyone to up their game and sail their boats better.”

The International One Design class, which totals nine entries and produced last year’s overall winner (Bill Widnall’s Javelin), will continue its own long-running tradition of keeping up with Widnall, a wizard on the racecourse. The IODs and Rhodes 19s will kick off the regatta early with races on Thursday, while the remaining keelboat classes (J/105 and Viper 640) begin racing on Friday. The ILCA dinghies race on Saturday and Sunday only and Saturday also features the North Sails Rally Race, a one-day distance race. All on-shore activities, registration and evening parties will be hosted at Boston Yacht Club and on-the-water racing is supported by the top-shelf race management teams from Eastern and Corinthian yacht clubs.