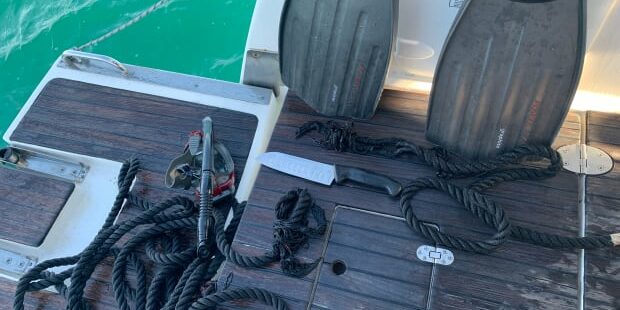 The autopilot on my 35ft sloop, Second Wind, had been both commissioned and sea-trialed. I had also completed all of the other upgrades I’d had planned in preparation for perhaps a year-long cruise through the Caribbean. Working with various local technicians, I’d added solar panels, a new water-cooled refrigeration system, a new chartplotter, air conditioning, an EPIRB, an AIS transponder, a new dinghy and outboard, and a set of Eastern Caribbean courtesy flags. I’d also added new winches at the wheel for singlehanded sailing and hired a professional rigger to check my standing rigging.

Now it was time for my first solo sail, an experience that would put both Second Wind and my skills to the test. Granted, I had solo-sailed my previous boat, a 25ft C&C, on any number of occasions up in Maine. But here on the coastal waters off the town of Fajardo in Eastern Puerto Rico, I would need an autopilot if only to stay head-to-wind while raising Second Wind’s significantly larger mainsail.

Because it would be my first solo departure from my slip, I called for some assistance in casting off the stern lines, bow lines and aft spring. The two dockhands who came by to help suggested they uncleat my port-side bow line from the dock and throw it onto the boat. They could then easily catch it upon my return. I typically leave my cleated lines at the dock. But since I’d have these two fellows to help me out upon my return, I decided to go with their suggestion.

To my surprise, as I backed out, they heaved all three port-side lines aboard. Perhaps there had been a communication issue. Whatever the reason, I now had all three lines sitting messily on my side deck, with the bow line lying over the port-side jib sheet. At a minimum, I would have to secure the latter before unfurling the jib. Oh, well, I thought as I backed the rest of the way out and began heading toward the open waters beyond the confines of the harbor.

Turning the boat head-to-wind, I raised the main as the autopilot kept Second Wind on course. That done, I switched off the engine and autopilot and fell off onto a port tack, sheeting in the sail as I did so. The feeling of freedom I experienced was nothing less than magical.

Engaging the autopilot again, I stood behind the wheel marveling at its back and forth movements as it maintained a proper heading. I took a few videos, which I promptly texted to some of my landlubbing friends on shore. I shouted for joy at the thought of being under sail again.

Soon afterward, I gingerly made my way up to the bow to clear the jib sheet. Thinking it was secure, I returned to the cockpit and unfurled the jib. Next thing I knew, I was sailing solo with both sails flying. Thoughts of future passages to St. Vincent and the Grenadines danced through my head. The cockpit was mine and mine alone. I moved about freely without ever having to say anything like, “Pardon me, I need to pull on that blue rope over there.” I played musical chairs, I sat to port, then to starboard, then to port again. I shot and texted some more videos. I went below to grab a beer. Having waited over a year for this day, I shouted to the skies again for the sheer joy of being alone again at sea.

Coming back down to Earth around 1630, I set a course for the marina. As I drew near, I rolled up Second Wind’s jib and switched on the engine. A substantial upgrade, my auxiliary was a brand-new 27hp Volvo diesel. However, when I pushed the throttle forward, the engine immediately quit. Looking forward, I now saw the same black dock line I thought I had taken care of earlier, stretched taut over the port bow. The problem was obvious. It had somehow fallen into the sea and fouled my propeller.

I was now midway between the marina and nearby Isla de Ramos, a small cayo with a sandy shore. One possibility was to sail into the marina and drop anchor in the little bay there. However, the water in the marina is too murky to snorkel, which meant I wouldn’t be able to untangle or cut the line. Worse yet, when I’d departed hours earlier, I’d noticed a sailboat already anchored in the exact same place I’d need to drop the hook. I, therefore, chose to sail into the lee of Isla Ramos instead. It’s not known as an overnight anchorage, but still seemed like my best bet.

I felt my heart racing as I turned hard to starboard and headed toward anchorage, dropped the main and made my way quickly toward Second Wind’s bow. (Though “quickly,” when you are 61 with joint issues, is a relative term.) Although I didn’t drift as far forward as I had hoped, I still dropped the anchor. Although I had no reverse engine with which to dig the anchor into the seabed, the current and breeze were both strong, allowing me to convince myself the anchor had set. Feeling more than a little proud at having managed step one, I grabbed my snorkel gear and went into the water, leaving a serrated knife in the cockpit.

The turquoise blue sea was now quickly darkening with the late afternoon sun, and the current was far more intimidating in the water. I had never before swum all the way from one side of Second Wind’s 12ft wide hull to the other. What if I was to get tangled up in the dock line as I was trying to work it free? What if I hit my head against the bottom of the hull? The words “Sea Tow” kept running through my head. I was the only boat in the anchorage, very much on my own.

Pushing back against my fears, I resolved to do the best I could, and diving down to attack the multiple tight wraps around the prop, I succeeded in quickly undoing the first of them before surfacing again. Unfortunately, it was fast becoming too dark to even see whether the remaining wraps were clockwise or counterclockwise, which meant the rest of the job would have to wait until morning.

Climbing back aboard via the stern ladder, I showered and prepared myself for what I knew was going to be at least 13 hours of a tossing about in the current. My anchor had already dragged, which meant I had to stay alert. Dinner consisted of salami slices folded up inside some slices of very dry bread. There would be no sleep that night, only a constant checking of the boat’s position. I turned off my two anchor alarms to avoid having to listen to their continuous ringing in stereo. If I could make it through the night without dragging all the way to the rocky, tree-lined shore to leeward, I would be fine. If not, I would have no choice but to weigh anchor and do may best to sail back to the cayo.

As I was standing watch, I texted a couple of marina friends to let them know what had happened. They offered encouragement and plenty of suggestions; however, by now I had decided that if I truly wanted to solo cruise the Caribbean as planned, I needed to deal with the situation I now found myself in on my own. It was test, a challenge. Nasty, ugly stuff happens. A competent sailor needs to be prepared to solve any and all problem he or she may encounter, whether or not there is anyone else around to help.

By dawn I estimated I’d dragged about 300 yards. Luckily the depth had remained a near constant 26ft. Going over the side again, my initial dive revealed a number of tight, clockwise wraps around the propeller shaft. This made sense, given the direction of the gear rotation the day before. I was able to undo a first wrap without much of a fight before having to come up for air.

Getting a second wrap off took a little more effort, but I was gaining confidence with every dive and able stay under a little longer as well. I did not count whether it took three or four more dives, but there was soon only one more bit of the line left to remove, a half-moon wrap stuck inside a groove toward the back of the prop. At the beginning of what I hoped would be my final dive, I noticed the hump and dorsal fin of a dolphin off Second Wind’s starboard bow, which I took to be a sign of good luck. Unfortunately, despite its presence, a strong tug on either end of the line failed to pull it free. I would need to cut it. Still in the water, I threw the long end of the line amidships to try a test cut in the cockpit. My knife sliced it nicely and quickly. After that it took only three more dives to cut both ends of the line close to the propeller shaft.

The question now was whether a burst of forward engine throttle would blow off the remaining piece of line still. I let the engine idle a minute or so before putting it in gear. I was overcome by an incredible feeling of relief and success as Second Wind began moving forward and the last few bits black of rope that had been left on the shaft appeared in the water astern. After weighing anchor, I motored the mile or so to the marina, maneuvered my way back into Second Wind’s slip and promptly fell asleep in my air-conditioned V-berth.

Although the longer portion of the cut line was still usable as a dockline—a victory of sorts—the experience still left a number of unanswered questions. Foremost among them: Did the fouled prop mar an otherwise exhilarating sail, or had my ability to overcome the difficulties I’d encountered make it a positive experience due to the way it had made me a better sailor? I lean toward the latter, since I always seek to learn something new.

Beyond that, had the cayo been a hazardous place to anchor overnight? Perhaps. Did I take a risk going into the water when and where I did, with no one else around to help? Should I have called Sea Tow to take Second Wind safely back to her slip? Maybe. At the end of the day, though, you can’t argue with success.

Of course, the other lessons learned are pretty obvious ones. Don’t ever leave a bunch of loose line lying around on deck. At the very least, they create a tripping hazard. At the worst, well, I suppose I had just experienced the worst. It’s also not a bad idea to always have a little mustard or mayonnaise aboard in the event you ever find yourself having to unexpectedly subsist for the night on salami and dry bread!