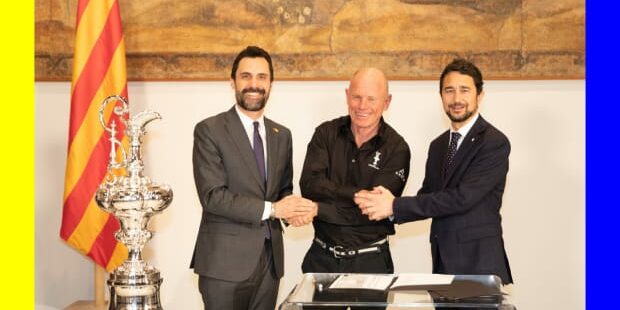 It’s official. Emirates Team New Zealand (ETNZ) and the Royal New Zealand Yacht Squadron are ditching their fans in Auckland for the port city of Barcelona, Spain. No word yet on how many pieces of silver will be changing hands as part of the deal that will see Barcelona play host to the 37th America’s Cup. The decision comes in the wake of months of acrimony and speculation following ETNZ’s announcement last year that the financial package being offered by Auckland wouldn’t be sufficient for it to mount a successful defense. In winning the hosting rights, Barcelona beat out Cork, Ireland, and Jeddah in the Kingdom of Saudi Arabia.

“Barcelona really is one of the most recognized cities in the world, so to have the ability to host the most recognized sailing event in the world is hugely exciting,” said Emirates Team New Zealand CEO Grant Dalton. “As Defender of the America’s Cup, we have always felt the responsibility to grow the event, the audience, and the sport of sailing on a global scale and certainly having the event hosted in a significant city such as Barcelona will allow us to propel the growth trajectory on the global sporting stage.”

For the record, there are now four teams planning to take on ETNZ in the 37th Cup: Swiss-flagged Alinghi Red Bull Racing; the UK’s Ineos Britannia; Italy’s Luna Rossa Prada Pirelli; and the New York Yacht Club’s American Magic. Cup fans will note the complete absence of a Spanish team.

Not to fear, though. “Barcelona holds a very special place in New Zealand’s sailing history, and we remember with pride the success of our 1992 Olympic Games sailing team and four-medal result,” said Commodore of the Royal New Zealand Yacht Squadron Aaron Young.

Yeah, right. I’m sure the memories of an Olympics that took place over three decades ago will mean the world to all those Kiwis who instead of watching the Cup on their home waters will now get to watch it on TV as it takes place on the other side of the planet.

Along these same lines, Marama Royal, chair of the Ngāti Whātua Ōrākei trust, one of ETNZ’s partners, claims, “Wawaratia ngā tai rere. Through this relationship we have had great satisfaction in sharing our manaakitanga with manuhiri visiting our shores here in Tāmaki Makaurau.” But again, I’m guessing that’s not going to mean a whole heck of a lot more for those people who understand Maori than it does to me.

Here’s a tip, ETNZ: spare the world your superficial multiculturalism and faux, self-serving Kiwi pride. Actions speak louder than words, and all the words in the world aren’t going to change the fact you’ve now officially turned your backs on some of the most passionate sailing fans around. Dalton has gone on the record a number of times saying that putting the hosting rights for the Cup up for sale to the highest bidder is the price that must be paid if his team is to win. Fine. If that’s ETNZ’s idea of winning, though, they can have it.