Notice to Mariners: Get your ZEN50 On 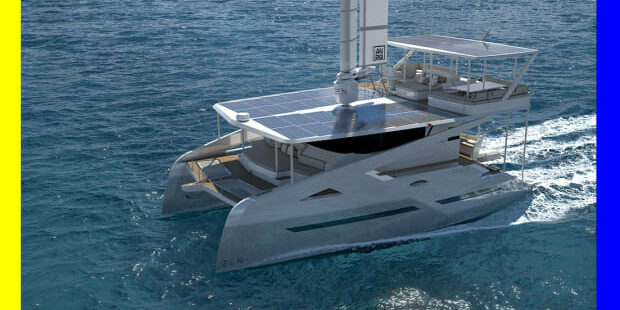 I’m not going to lie to you, when I first laid eyes on the renderings for the ZEN 50 zero-emission solar-electric cruising cat, my thoughts were such that they couldn’t really be published in what I like to think of as our “family” publication. The more I considered it, though, the more I began to wonder whether French naval architect Julien Mélot’s and Malta-based builder Zero Emission Nautic Ltd. might not be on to something here.

Maybe it’s the somewhat vestigial, but no less serious looking wing sail—a wing sail with a soft, fabric skin that can apparently be easily furled and unfurled depending on the conditions. Maybe it’s the truly massive expanse of solar panels that also double as a pair of sunshades, and the arrangement that just seems to make so much sense. Maybe it’s the way interplay of angles making up the hull seem to work together so well—that or the way the closer I looked, the more this boat looks like a heck of a lot of fun.

Built entirely out of carbon with a Corecel core, the ZEN 50 is entirely self-sufficient in terms of its energy needs—in contrast to an awful lot of self-described “green” vessels out there, it doesn’t include any kind of fossil-fuel powered generator—and is expected to have a top speed of 10 knots under power alone and 14 knots under power and sail. As for that sail, it’s anything but an afterthought, being a product of France’s Ayro, a company that also designs and builds for wingsails for freighters and commercials. So confident are the boat’s builders in its potential that three versions of the boat are available: racer, cruiser and “explorer.” Belowdecks, up to four cabins are available, as is the possibility of equipping the boat with everything from an onboard dive compressor to a watermaker and space for an assortment of water toys.

View the 6 images of this gallery on the original article

“Our customers are aware that they will be sailing a performance catamaran with zero emissions; they are not looking for a floating hotel, but rather want to enjoy the experience and reconnect with the elements. The wingsail acts as a range and speed extender, allowing those who dream of sailing the oceans with their families to do so without leaving a carbon footprint,” the company says.

Hmmmmm… Crossing oceans? I confess I think I’m going to wait a bit before agreeing to transit, say, the Atlantic on this thing given all that windage. I’m also not in a hurry to see how seakindly this boat will end up being in any kind wicked seaway.

That said, if Mélot and company do, indeed, ultimately deliver on what they’re now promising, they will have succeeded in creating not only an entirely new kind of sailboat, but a sailboat that just might catch on. Hard to believe? Yeah, I would tend to agree. But then again, look at some of the more voluminous cruising cats sailing around out there these days. Imagine what the sailors and naval architects of just 50 years ago would have said if you’d ever tried presenting them with the plans for any these kinds of vessels. They’d likely have said you were crazy, yet now such boats are commonplace.

It’s not often I say this kind of thing but, love it or hate it, in the ZEN 50 we just might be seeing the true future of sailing. Not only that, but much as the Luddite in me may hate to say it, the future looks kind of fun. For the latest on the new boat, go to www.zenyachts.com.