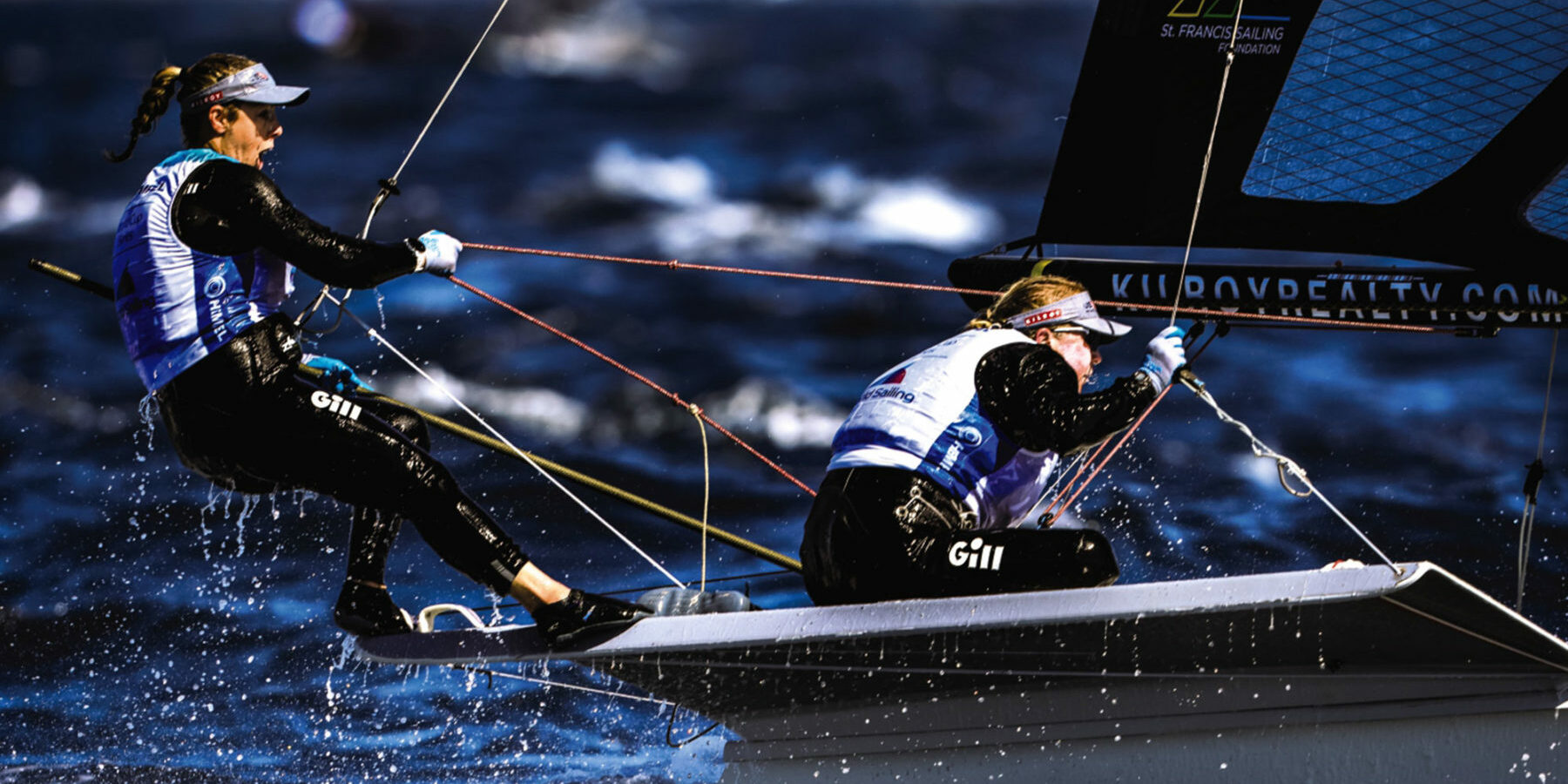 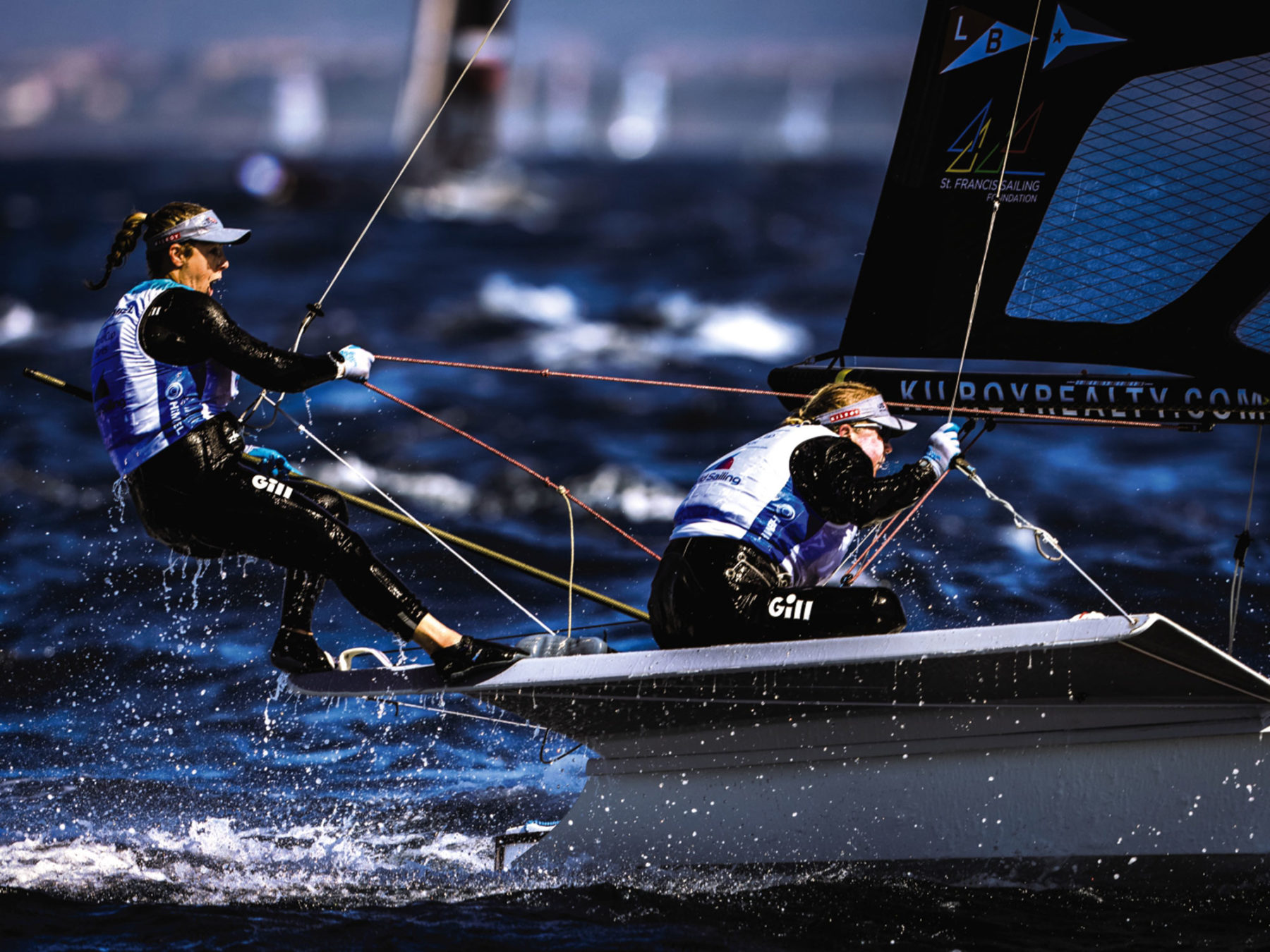 It’s blowing 25 knots off the land from the northeast. Thick, dark clouds block the sun and bring the cold to the Trofeo Princesa Sofía regatta in Spain, the first European event of our 2022 Olympic calendar. My cheeks and hands are freezing, and my 4/3 wetsuit is soaked. I haven’t been in a wetsuit this thick in years, so moving around the boat is difficult. The wind is crazy puffy and shifty, and it feels like survival conditions at times. I have some nervous and excited butterflies in my stomach knowing that the racing is going to be intense. I have no idea what to expect from ourselves or the fleet. Welcome to Palma, I think to myself. Damn, it’s cold out here.

My teammate, Maggie Shea, and I call these survival days “meerkat racing,” where I need to be “head out of the boat” upwind and downwind to see what crazy puffs and shifts are coming our way. The No. 1 priority is keeping the rig in the air. It’s just us against the boat, but we both love these crazy days.

For the first race, we decide we like the left side of the racecourse and the pin is favored. We set up for a pin start, and although there is chaos around us, we focus on our boat control and distance to the line. We are about to start our first race of the Paris 2024 campaign in our favorite conditions—windy offshore, just like the Midwestern lakes we both grew up on.

We have a great start, and after one minute of being locked into speed, I look over my shoulder and see we’re punched out on the fleet. “Great start, great mode,” I tell Maggie. “If we get headed with pressure, let’s tack. We can tack and clear the fleet no problem.”

I know we’ve both looked over our shoulders and seen that once we complete our tack onto port we will be winning the race. These are the moments that live in my mind forever.

We win the race by a large margin, only to learn we were OCS—by inches. We flush that race and frustration knowing we are fast, have good boathandling and love these conditions. We continue on to race two and round the weather mark in the top three, but while setting the spinnaker, we were forced into a capsize by another team, causing us to finish 12th. That’s a lot of points in the first two qualifying races of a 12-race series, but our goal is not the results, so I reset my mind for race three, which we go out and win.

One of our strengths is our ability to recover from adversity. Before this regatta, our training time had been limited while Maggie recovered from a surgery in December 2021. We’d been progressing as Maggie figured out what her body could handle. It was only the week before the event in late March that we could finally manage five sailing days in a row at three hours each day. So, finishing this first three-race day and surprising ourselves with good speed and tactics was already a huge win. Winning that third race was a big deal.

The last time we sailed this event, in 2019, we struggled to keep our boat upright in the windy and rough conditions. Now, three years later, we had a fire in our bellies to prove that Palma wouldn’t take us down like last time. With our coach, Giulia Conti, and the US Sailing Team performance coach, James Lyne, we set regatta-­specific goals. We had no idea what to expect from our performance because we hadn’t seen the fleet in so long, and we hadn’t raced in a long time. It was a strange feeling, but it forced us to focus on our goals, doing the best we could with the tools we had and only working on things in our control.

To add another layer of complexity, the 49erFX class recently switched to new masts (formerly made by Southern Spars, now CST) and sails (switching from North Mylar to 3Di). We used this new equipment for only one week before the regatta and went into the event knowing that we would have a lot of experimenting to do with our settings.

The forecast called for a windy and cold week, with 12 fleet races and one medal race. Given that, we knew it would be a physical grind, especially for Maggie, but also a mental grind to battle tough conditions. With our tough results on the first day, we had little margin for error to qualify for the Gold Fleet (the top 25 boats overall after two days of racing), but we squeezed into it in 19th ­position overall.

The third day brought beautiful southwesterly conditions that dictated a must-go-right racetrack. The race committee called for four races, and the day was about boatspeed, good lanes to get right, and managing the massive waves downwind. I thought to myself, Let’s see what kind of comeback we can make in the overall results.

Sailing downwind in these conditions is all about finding the limit. The 49erFX bow is low to the water, so we try to stay as far back and hike as low as we can. Maggie pushes her weight into me, and we balance off each other while basically spooning in the back of the boat. I assess each wave and how we are going to get through it. We have simple phrases that translate into what Maggie needs to do with the spinnaker. For some waves, we have to slow and let them pass; for some waves, we can head up at the last ­second to “slice” it. If I misjudge a wave, I tell Maggie “stiff leg,” which means we might nosedive, so we push as hard as we can with our front leg to keep our weight back, hoping we don’t pearl. These types of days are demanding for the crew to work the spinnaker sheet through the range in the waves, and mentally taxing for me to make sure I am making the right call. When you add in other boats, and everyone’s going 18 knots, and not all of them are in control—downwind sailing gets very spicy. Survival is simple tactics and good boathandling.

Before the start of race four, we were excited about how we were sailing. I was exhausted and couldn’t imagine how Maggie was feeling. She is the toughest person I know, and despite the pain and exhaustion, she rallied. We split a Red Bull, charged each other up with some positive vibes and sent it.

That day, we moved up the standings and surprised ourselves with such a positive jump. We managed to have two top sevens, which are keeper races but nothing special. For the final race of the Gold Fleet series, the pin was favored. We agreed to start there, and fought hard with a pack of six other boats. We struggled with lanes throughout the race only to find out we got dinged with another OCS.

Despite this tough ending, I was proud of our team for delivering on our goals and how Maggie handled an insanely tough week. We hit the beach and were surprised when we found out we qualified for the medal race. We now had the opportunity to gain more medal race experience, which is so important for the long game.

It was a tricky one, with a puffy offshore breeze. We were late at the start, which put us back in the fleet. In the end, we finished ninth overall out of 60 teams. Looking back, despite the challenges, we remained rock-steady in our approach and are ever more driven to Paris 2024.