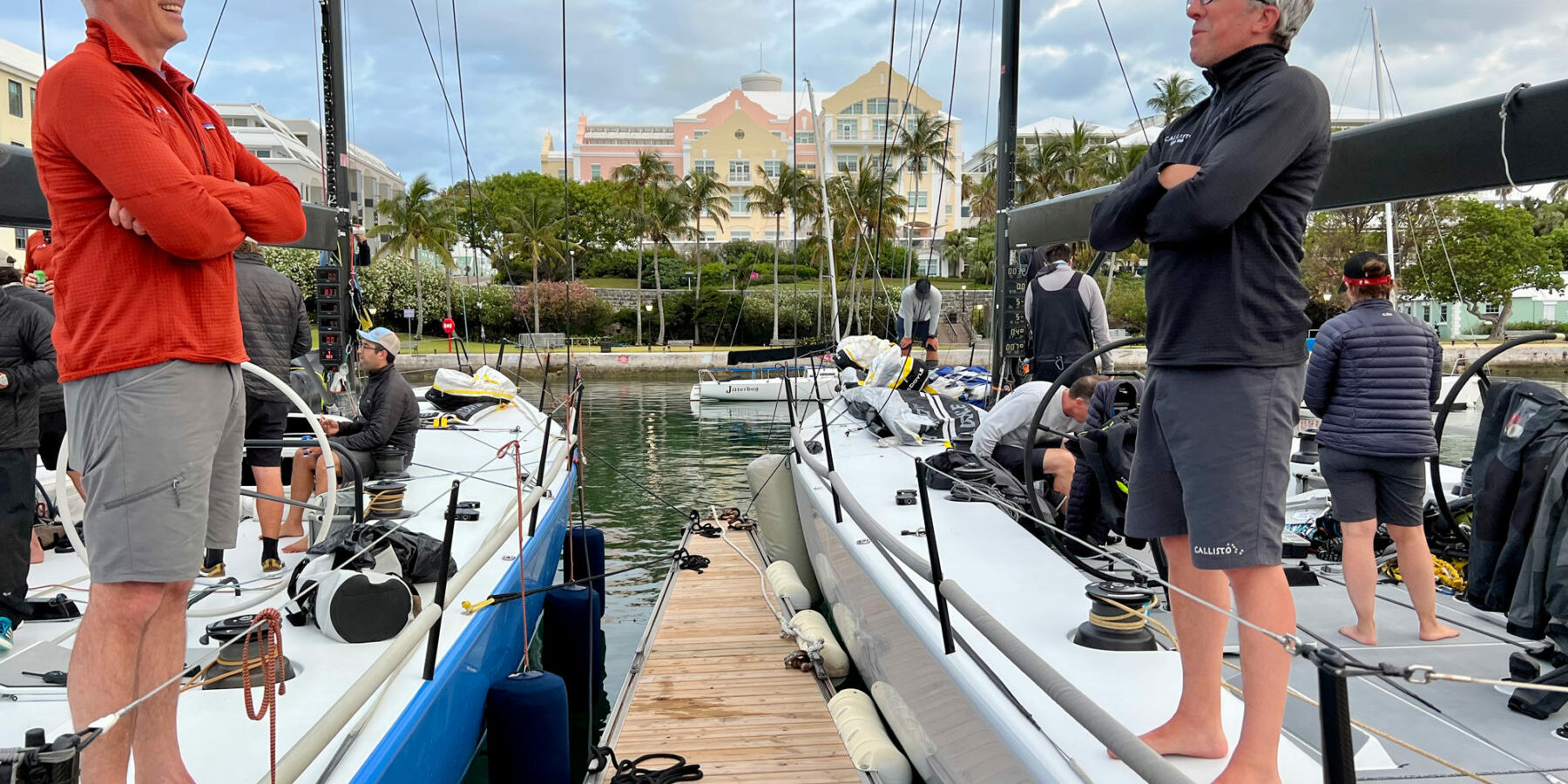 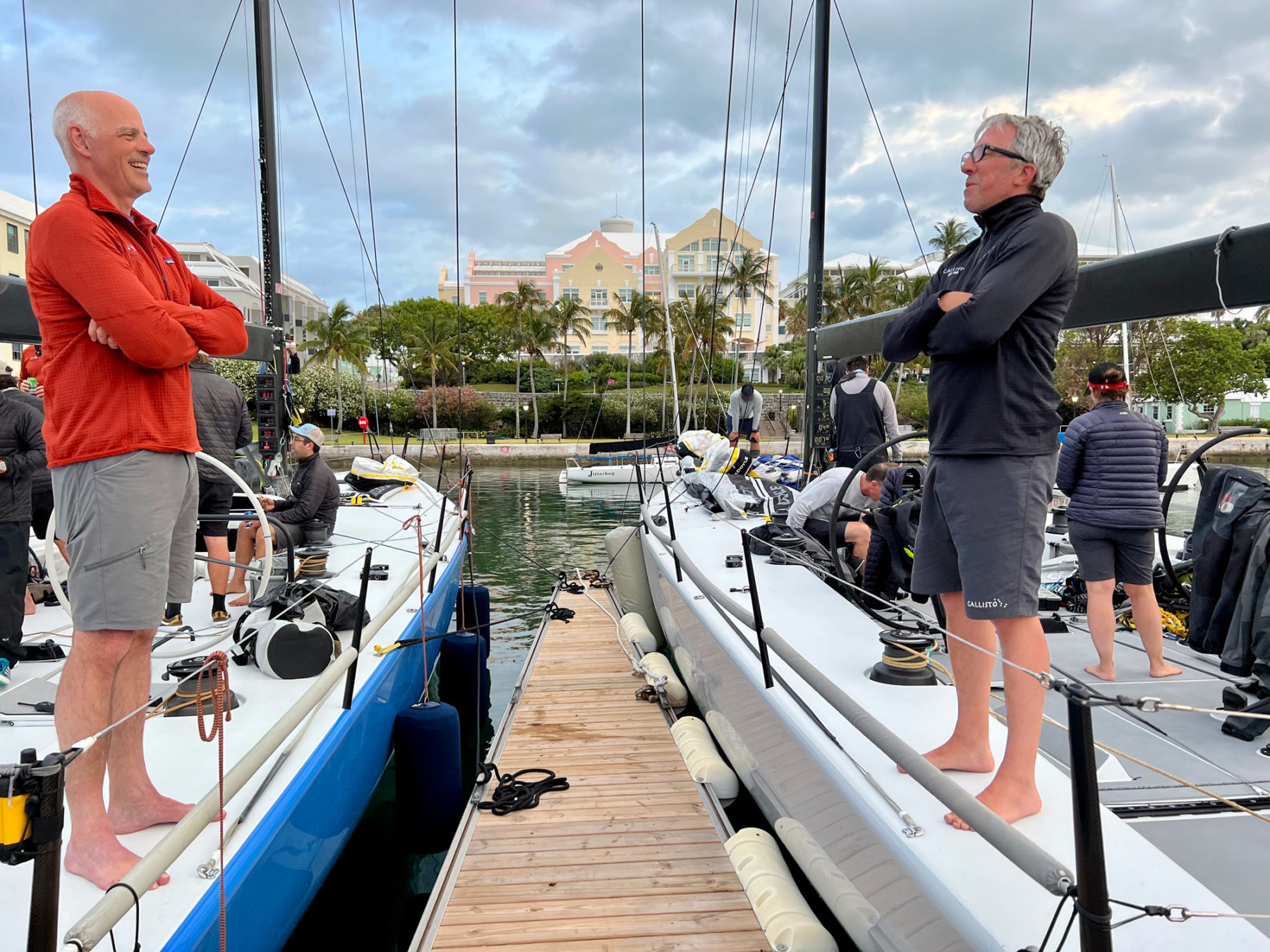 That the two were racing in different divisions—Warrior Won’s Gibbs Hill Lighthouse Division is more oriented to professionals and Callisto’s St. David’s Lighthouse, for amateurs—didn’t matter. It was the third head-to-head showdown between the crews over the past year, and they were within sight of each other on the water, which allowed each crew to gauge their performance against a well-known competitor. Trial and error are how racing programs advance.

Sheehan (Larchmont, New York), however, placed another notch on his belt when Warrior Won came out on top, finishing at 02:10:34 ADT for an elapsed time of 56 hours, 43 minutes and 34 seconds and line honors in the Gibbs Hill Lighthouse Division.

Murray’s (Lake Bluff, Illinois) Callisto wasn’t far behind, finishing at 02:55:01 for an elapsed time of 57:48:01 and line honors in the St. David’s Lighthouse Division.

The two teams were the third and fourth finishers overall in this year’s Bermuda Race, and now they’re the provisional leaders in the Gibbs Hill Lighthouse and St. David’s Lighthouse divisions, respectively. There are many more finishers to come, but this year could be a year that the bigger, faster boats do best.

“The Callisto program and Jim are wonderful people,” said the 56-year-old Sheehan. “They pushed us hard in every race we’ve been in. We’re pushed to be as good as we are because they’re as good as they are.”

Sheehan’s Warrior Won captured overall and class honors in the Transpac Race last year and in the Caribbean 600 last February. In both races, Murray’s Callisto placed third in class and fifth overall.

“Chris and his team are setting fire in offshore racing,” said the 49-year-old-Murray. “We’ve had the opportunity to line up against them three times in the past year, and it’s great to race those guys. They set the standard.”

Berthed next to each other at the Royal Bermuda Yacht Club marina, members of the two crews both spoke of difficult conditions, which started before the race even began.

“I think it was an incredibly challenging race,” said Murray. “The forecast went out the window when the front moved through the starting line (on Friday). It immediately became a downwind race. We chased the front all the way to Bermuda, so we had a confused sea state. The winds were up and down and quite shifty. It was a whole mix of everything you could get. It was a great race.”

“The pre-race forecasts had us doing a jib reach the whole way. It transpired on the day of the start that it would be downwind and we brought a couple of spinnakers for that scenario,” said round-the-world sailor Stu Bannatyne of Warrior Won. “It was a tricky race at the end. Hard on the gear. A lot of boats sustained damage but we kept it together. We pushed the boat hard; it was a great effort.”

The Warrior Won crew outdueled Callisto in part because they had all-hands on deck for the final 17 hours or so, from 0900 on Sunday to the finish.

“I reckon one key part of the race was the full court press,” said Bannatyne. “We had everyone on deck, pushing 110 percent. We watched tracker religiously over the last day and that made a difference. It was cool to do a downwind race to Bermuda.”

Being in the St. David’s Lighthouse Division, Callisto’s crew had 10 amateurs and four professionals. The pros, however, are not allowed to helm the boat. Murray said that they rotated through six amateur helmsmen who knew how to handle the boat, and the pros were great at coaching in the very hard conditions.

“Saturday night we were going 20 knots and launching off waves,” said Murray. “They were only 3 to 4 feet, but quite steep and coming out of nowhere. And it was pitch black. The crew buckled down and kept their heads in the game. We were able to get through the evening and keep everybody present and focus on driving the boat to Bermuda.”

Murray said that they broke one important spinnaker due to the rough conditions. Warrior Won also blew out a similar sail.

“We lost one spinnaker, just due to the incredible sea state,” Murray said. “It was our A2+, our up-range spinnaker, so pretty important. We used an A2 the rest of the race, but had to nurse it. We dialed back about 10 percent. Luckily, the kite we had was really well made and held together to the finish.”

The bulk of the fleet is making good progress towards Bermuda, and more and more boats are beginning to cross the finish line off St. David’s Lighthouse.

Winds have been lighter across the course on Monday, and the double-digit speeds of many boats yesterday have fallen significantly, and the bulk of the fleet still at sea is expected Tuesday into Wednesday.