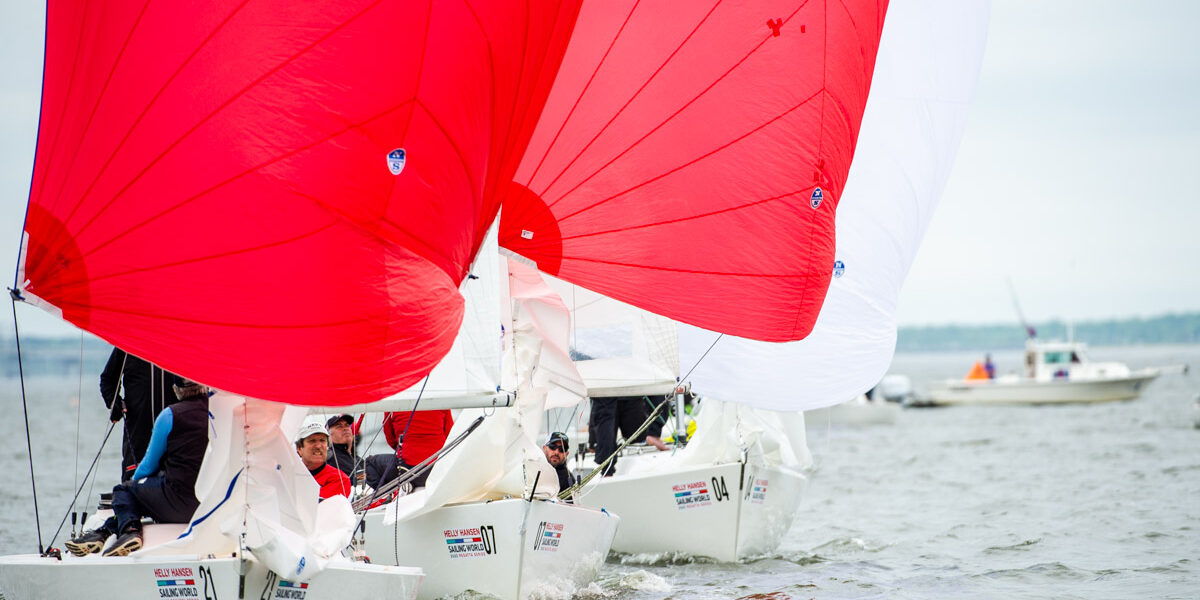 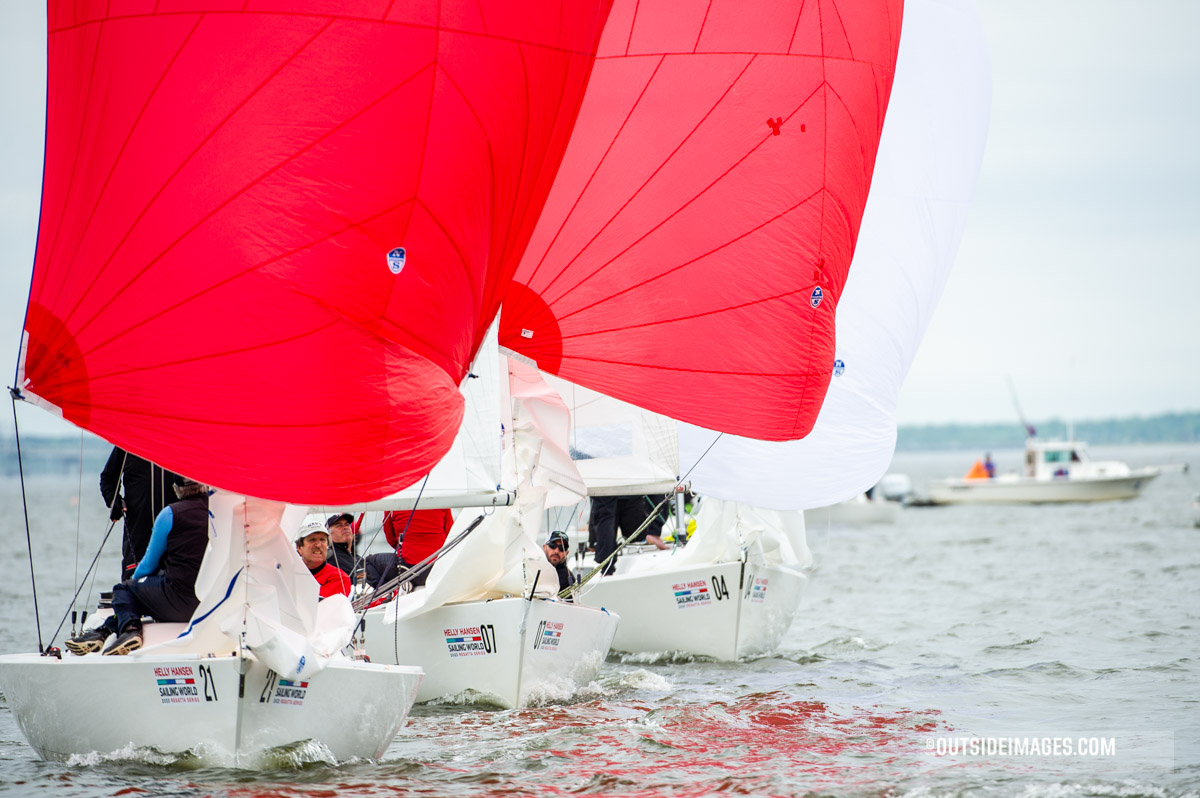 Skipper Jeff Todd (Bow 210 kept his scores to top-5 to win the J/22 division at the Helly Hansen Sailing World Regatta Series in Annapolis, but had to work hard for every finish. Paul Todd/Outside Images

Jeffrey Todd and his teammates on the J/22 Hot Toddy have finished second in their class at the Helly Hansen Sailing World Regatta Series in Annapolis more times than they can, or care, to remember, but this weekend they finally broke the curse with a win in their 22-boat fleet. After sailing five races in extremely challenging conditions: light winds, strong currents and a talent-packed fleet of competitors, Todd and his crew prevailed with a consistent string of top-five finishes.

“We are experienced Chesapeake Bay sailors, so we’re used to dealing with the conditions we had this weekend,” Todd said. “These are our normal sailing conditions, which may be frustrating for others, but we’re used to it.”

Todd contributed his team’s success over the three-day regatta to good starts and boatspeed, but mainly to his team keeping their cool when things went wonky. “We were always in the hunt at the first weather mark and a couple of times we passed people on the run,” he says. “In the short, half-mile legs we had, we had to get a good start and stay ahead. We set the rig loose, the headstay loose and just tried to keep the boat moving and find the breeze. The boat needs power.”

The J/22s and other classes racing closer to the entrance to the Severn River enjoyed more localized wind throughout the weekend while the classes racing further out in the Chesapeake Bay were less fortunate. On the circle with J/35s, J/105s and J/80s—the later being the two of the regatta’s larger classes—only two races were completed over three days, putting a premium on top finishes.

J/80 division winners Will and Marie Crump and Thomas Klok’s R80 won the only race on Saturday and finished fourth in Sunday’s one and only race—and just barely—to win the division. 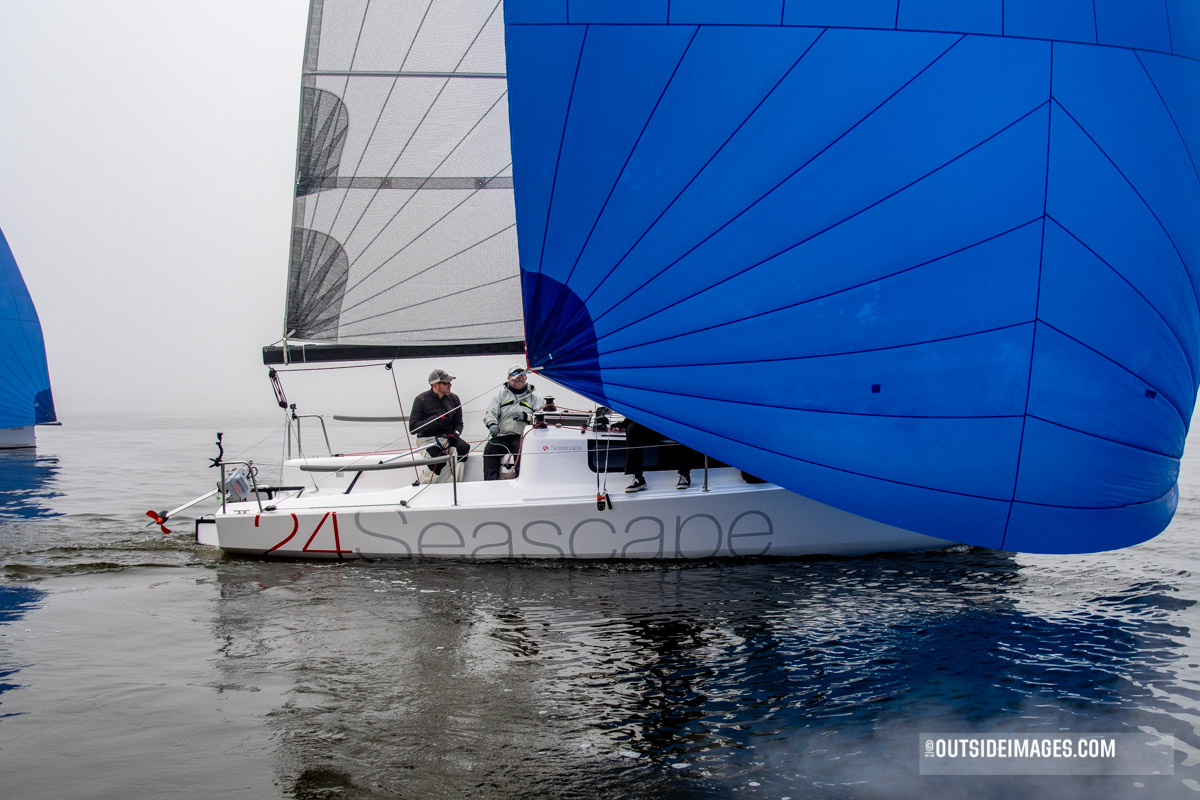 “The last race was really crazy,” Will Crump says. “We actually won the pin end, and in this kind of race, what you’d normally expect would be to win the pin, go into the positive current, extend, tack and then cross the fleet.”

But that’s not how it played out.

They rounded the first mark eighth in a cluster of J/105s and J/80s and battled their way toward the front of the fleet.

“It was hard to get clear air on the way down the run, but we found the best breeze we could. We may have lost a couple of boats early but then gained a few back.”

On the next leg, they decided to “do something totally different” and sailed toward the western shoreline in search of more breeze. “That didn’t work out either,” Crump says, and it wasn’t until they started the final downwind leg (still in ninth) when they lucked into a localized streak of wind. “We picked up four or five boats to cross the line in fourth place,” Crump says. “It was just enough.”

On the very same racecourse, Cedric Lewis and Fredrik Salvesen’s J/105 Mirage was having its own battle. Having won the previous day’s race they were in command, but then found themselves going head-to-head with Ray Wulff’s team on Patriot when the race committee set the fleet off into the unpredictable and light wind.

“We got a clean start—not the perfect one—and after a long and crazy race, we basically finished a foot behind Patriot,” Lewis says.

That set up Mirage with a 1-point lead going into what was expected to be the regatta’s final race, which Patriot was winning by a large margin before the race committee canceled it on account of too little wind.

A new addition for the Helly Hansen Sailing World Regatta in Annapolis was a daily distance-race for a Beneteau First 24 class. With a fleet of four boats, all teams were tasked with navigating the Chesapeake Bay’s complex currents and winds, and each day produced a different winner. In the end, Peter Lalli’s team on Electric Mayhem, from Huntersville, North Carolina, prevailed in a three-way tie after winning the final 10-mile race.

“There were quite a few lead changes, which made it a lot of fun,” Lalli said. “It’s really incredible that in two of the three races the top-three teams finished within a minute of each other after 10 or so miles of racing. This was the first time the fleet had been here and we had such a good time together.”

The trickiest of all the race circles was that set in the middle of the Chesapeake’s strongest current and packed with Viper 640s, J/70s and J/30s. The Vipers and J/70s were two of the largest fleets at the regatta, which made it all the more challenging for teams to find clear wind and avoid the worst of the current.

The Viper 640s were sailing their Atlantic Coast Championship and Mary Ewenson’s team on Evil Hiss prevailed after a nailbiter of a day. With a second and a first in their score line from the previous day, they led the series but struggled in the morning’s first race—until the final feet before the finish.

“There were three boats between us and the committee boat all piled up and we didn’t know if we got them all,” Ewenson said. “They got tangled up with each other and we were able to slide through.”

Ewenson and her crew managed a fifth in the final race of the series to win the regatta by only 2 points over Jay Rhame and Peter Beardsley’s Great Scott. “For this weekend current was the story. It was nuts,” Ewenson says, “but the racing was great and the Viper fleet is super deep right now, so it was really fun.”

A similar story played out in the J/70s with Ian Hill’s Sitella leading the regatta before the day’s one and only race. John Heaton’s Emperia got the better of the start and went on to win the race while Sitella battled to recover from mid-fleet.

“We got fouled in the start and that put us on the backfoot a bit,” said Terry Hutchinson, Sitella’s tactician. “But we had a good first beat, got around the top mark in 18th and clawed our way back to 11th from there.”

Patience, he says, was the key to Sitella saving enough points to win by 2, and Hutchinson credited crewmates Dan Morris and Dave Hughes—a two-time Olympic sailor—for ways to get back into the race. “Dave was a huge help,” Hutchinson said. “This is the first time we’ve sailed together, and I can see why he has sailed for our country twice at the Olympics. He’s really good.” 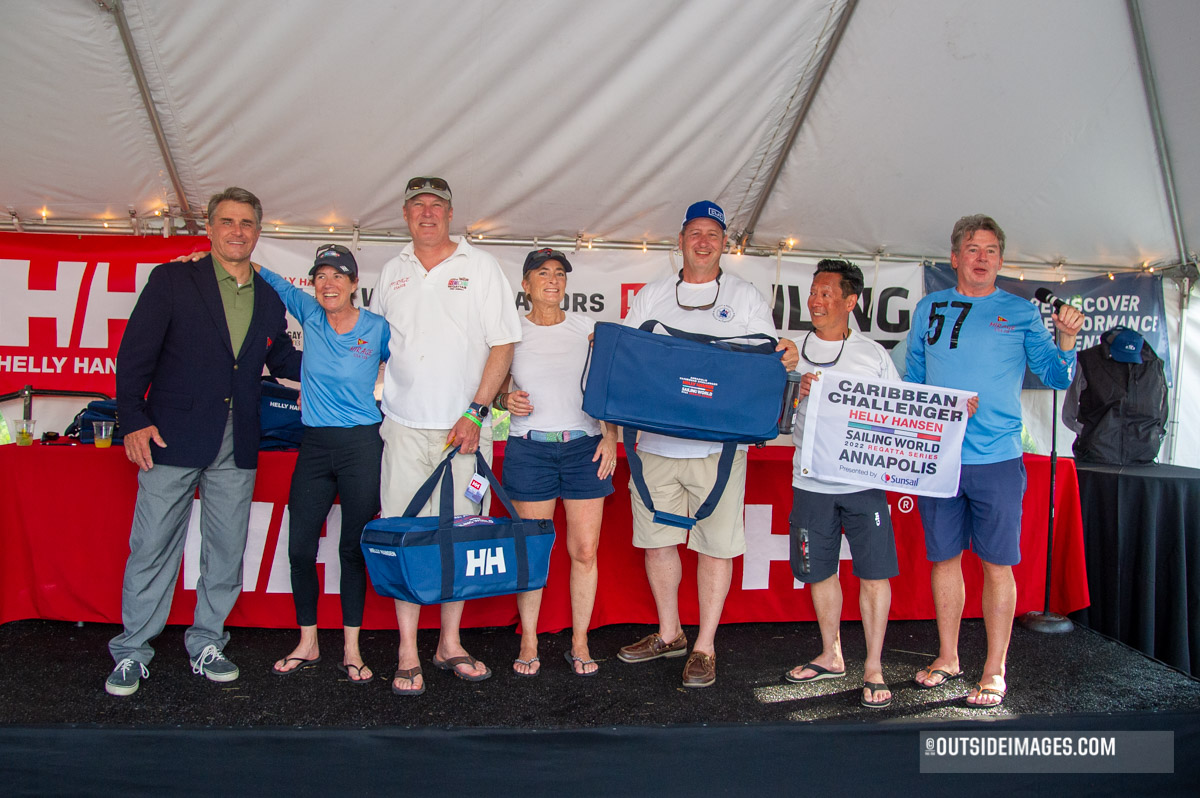 With the regatta’s awards presented at host Annapolis Yacht Club at the conclusion of racing on Sunday afternoon, Commodore Ed Hartman drew the regatta’s overall winner from amongst individual class winners, and it was Team Mirage that finally earned a coveted berth at the Helly Hansen Sailing World Caribbean Championship in October.

“We’ve won this regatta so many times and never won the overall,” said Mirage’s navigator Molly Wilmer. “Honestly, we always thought it was rigged against us, so this is amazing and we will definitely be there. We’re going for sure, and we’re going to win it.”