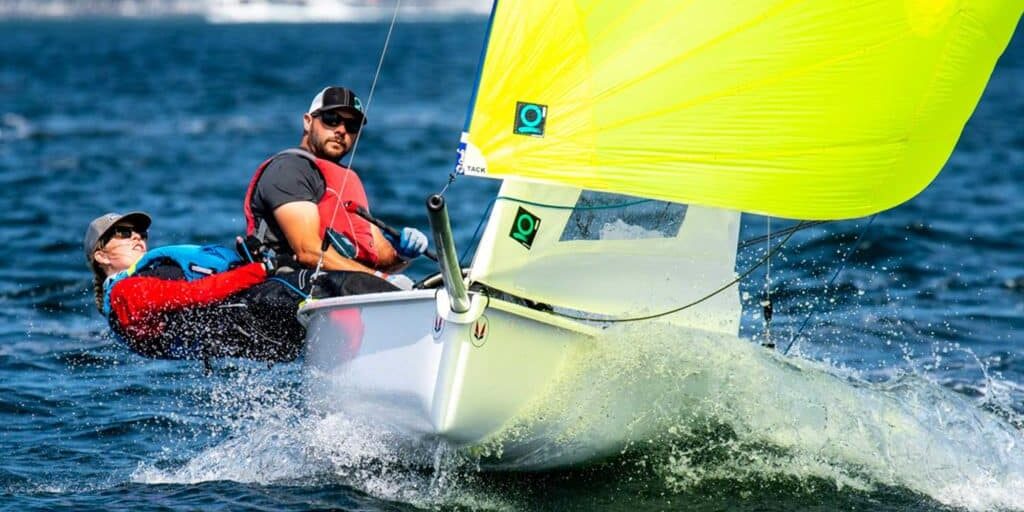 Quantum Sails, sailmaker of the fast-growing Melges 15 class, has joined the Helly Hansen Sailing World Regatta Series as the Official Sailmaker for the series in 2023 as it expands its outreach and one-design class support across the United States. Paul Todd/Outside Images

Quantum Sails has joined the Helly Hansen Sailing World Regatta Series as the Official Sailmaker for the 2023 season, which will consist of five U.S. qualifying events kicking off in St. Petersburg in February and culminating with the Caribbean Championship in the British Virgin Islands this October.

Since 1996, Quantum Sails has provided sailors with top-quality equipment, performing at the highest level from the race course to cruising destinations around the globe. By utilizing the latest technology in sail design and manufacturing methods, and a team of top experts, Quantum produces sails that are unmatched in performance, consistency, and repeatability. Quantum’s focus on sustainability, from solar-powered facilities to recycled sail materials, ensures generations to come will have the opportunity to enjoy sailing on cleaner waters.

“We are thrilled to welcome Quantum Sails to the Helly Hansen Sailing World Regatta Series,” said Sarah Renz, Event Director for Sailing Events, Bonnier LLC. “We had a great season last year and have growing momentum with a record number of registered boats for St. Pete with four weeks to go. Interest among new and diverse teams has been outstanding and we look to have robust participation on and off the water at each of our five domestic events. Having partners like Quantum Sails allows us to continue to build the sustainability efforts, launch the Regatta Speaker Series and produce world-class events.”

“Quantum is excited about this new partnership and the opportunity to deliver our comprehensive approach to regatta support to a wider range of sailors,” said Ed Reynolds, President of Quantum Sails. “The Helly Hansen Sailing World Regatta Series team has built an incredible platform and we look forward to working with them to elevate the program.”

As has been tradition for several years, the 2023 regular season will open for the Helly Hansen Sailing World Regatta Series in St. Petersburg, Fla., (February 17-19) hosted by the St. Petersburg Yacht Club. The second stop in San Diego, hosted by the San Diego and Coronado Yacht Clubs, will add a handicap sailing race circle and two-day Distance Race in addition to the traditional lineup for the weekend of March 17-19.

The Helly Hansen Sailing World Regatta Series was founded in 1988 by Sailing World and has grown to become the largest and most popular sailing regatta series in the United States. Quantum Sails joins a strong team of sponsors to provide excellent race support for cruising and competitive sailors across the country.

Registration and race updates for the series may be found at @sailingworldregattaseries and sailingworld.com/regatta-series.

Sailing World is the authority on competitive and performance sailing, serving its passionate audience since 1962 with award-winning storytelling and instructional content. Delivered through its quarterly print publication and numerous genre-leading digital channels and national regatta series, Sailing World’s coverage embraces the entirety of the sport, showcasing its champions, its technology and equipment and the racing lifestyle.

Since 1996, Quantum Sails has focused on providing the highest performing products and the highest level of service and support to racing and cruising sailors of all levels. Quantum Sails is headquartered in Traverse City, Michigan, and boasts a network of over 70 owned and affiliated sail lofts around the globe. Today, Quantum Sails is equally relentless about delivering on their promise to help sailors pursue their passions and meet their challenges with a higher standard of service, customer care, education, service and mentorship.