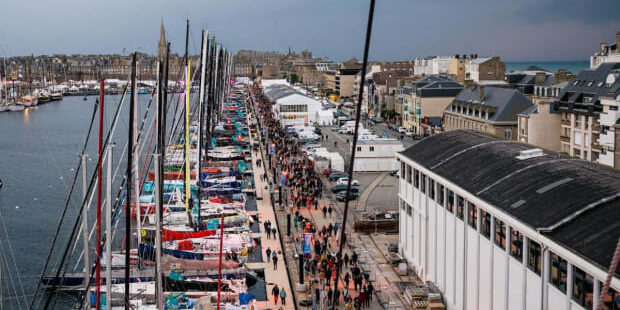 If you follow the pros, you’ve probably seen the Route du Rhum on many sailing CVs, but what is this event and what can we expect from next week’s race?

The Route du Rhum is a French transatlantic race beginning on November 6 in Saint-Malo, France and finishing 3,500 miles later in Guadeloupe. The race is held every four years and sailed solo by skippers in four classes: Ultim, Ocean Fifty, Class40, and IMOCA 60. Two additional classes—Rhum Multi and Rhum Mono—make space for competitors who don’t fall into any of the above classes. The current race record set in 2018 by Francois Joyon is seven days, 14 hours, 21 minutes, and 47 seconds.

Despite many of these classes being typically the domain of professional skippers, one important attribute of this race is that amateurs and professionals alike participate. This makes it a critical jumping-off point for those hoping to break into the professional circuit. And, since the Rhum classes open the race up to any boat greater than 39 feet, it’s possible for sailors to go toe-to-toe with their heroes.

This year the IMOCA 60 class weighs in with a massive 37 entrants, 13 of which are first attempts at a solo race. Vendée Globe fans will recognize a number of favorite solo racers on the list including Sam Davies, Pip Hare, Jérémie Beyou, Kojiro Shiraishi, and Isabelle Joschke. A few of the entrants like Justine Mettraux and Kevin Escoffier will be completing the race just to return to Europe and continue prep for the start of The Ocean Race in January.

“It’s a mythical race and it’s also a course that I really like,” says Joschke. “Leaving France in the autumn and crossing the Atlantic, sometimes facing great difficulties and having this great reward at the end with the finish in Pointe-à-Pitre. My objective will be to finish, to have fun. The icing on the cake would be to finish in the top 10. It’s nice to have so many IMOCAs on the starting line. This means that there will be a match everywhere, in front, in the middle and at the back of the fleet. It looks exciting!“