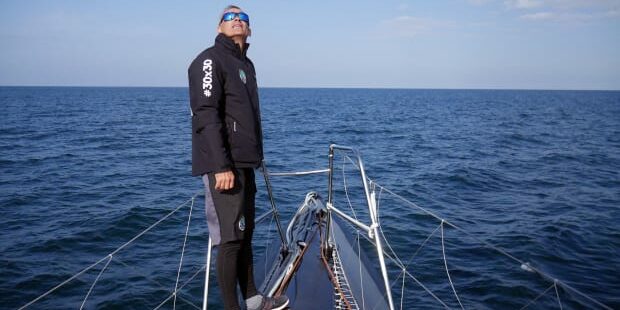 Today marks the beginning of Spindrift’s standby window for an attempt at the Jules Verne Trophy: the record for the fastest global circumnavigation. The current record, held by Francis Joyon aboard IDEC Sport, was set in 2017 at 40 days, 23 hours, 30 minutes, and 30 seconds. In the past 30 years, The Jules Verne Trophy—named for the author’s novel Around the World in 80 Days—has been halved from its original pace set at 79 days 6 hours, 15 minutes and 56 seconds.

Dona Bertarelli and her husband Yann Guichard are heading up a campaign to break Joyon’s 5-year-old record. Each a sailing star by their own rights, the couple has spent years preparing to shave just a few hours off. “We believe a displacement trimaran can still beat the record, but not by much. The next big jump will be with a foiling boat,” says Bertarelli. “However, the technology just isn’t there to make it safe and reliable yet.”

They will be making their attempt aboard Sails of Change (a former Jules Verne Trophy recipient under the livery of Banque Populaire V). “There wasn’t a reason to build a new boat when we believed this boat could still break the record. We’ve made many modifications, and the boat now is pretty much what we would have designed if we were starting from scratch,” says Bertarelli. Not to mention that for a campaign centered around ocean health and sustainability, reusing a pre-existing hull cuts down on the campaign’s carbon footprint significantly.

If you’re familiar with the maxi tri fleet, it’s immediately clear that Sails of Change has gone through more than a cosmetic upgrade. At first glance, the boat is clearly stouter than before with almost ten feet sliced off the central hull, making it the same length as the amas. The mast has also been shortened and the cockpit enclosed, offering more protection for the crew. “We’re not mercenaries. We’re not going to sacrifice crew comfort and safety,” Bertarelli says. Plus, the new structure makes space for solar panels, part of perhaps the boat’s most surprising upgrade: they have removed the generator and will be completing the circumnavigation without fossil fuel.

“We need energy onboard for the autopilot, the heater, to be able to eat,” says Guichard. “So, we have 36 square meters of solar panels onboard, we have two wind turbines, and we have as well a direct methanol fuel cell, so we don’t use any fossil fuels onboard.” Bertarelli’s decades-long background in sustainability advocacy has led this project to be more than an awareness campaign. In addition to eschewing fossil fuels, they have a children’s education program that teaches school kids about sustainability, and the team also supports the 30×30 initiative to get 30% of the planet’s land and water protected by 2030.

Unfortunately, today’s start to the standby window doesn’t necessarily mean we’ll the boat sailing anytime soon. The weather pattern necessary to make a new record possible is extremely rare, and the team waited the entire standby window last year without it ever arising. “We can only be certain about the weather three days out, with an idea about 10 days out,” says Bertarelli. “What we’re watching is the Southern Ocean. We know we can get through the Atlantic in a certain time, so what we’re waiting for is the right system in the Southern Ocean to bring us around the Cape of Good Hope. Beyond that, it’s up to luck.” Guichard and navigator Benjamin Schwartz will check in every 12 hours for the duration of the standby window to assess the forecast and make a call about whether a record is possible.

SAIL will continue bringing updates on this story as it develops.